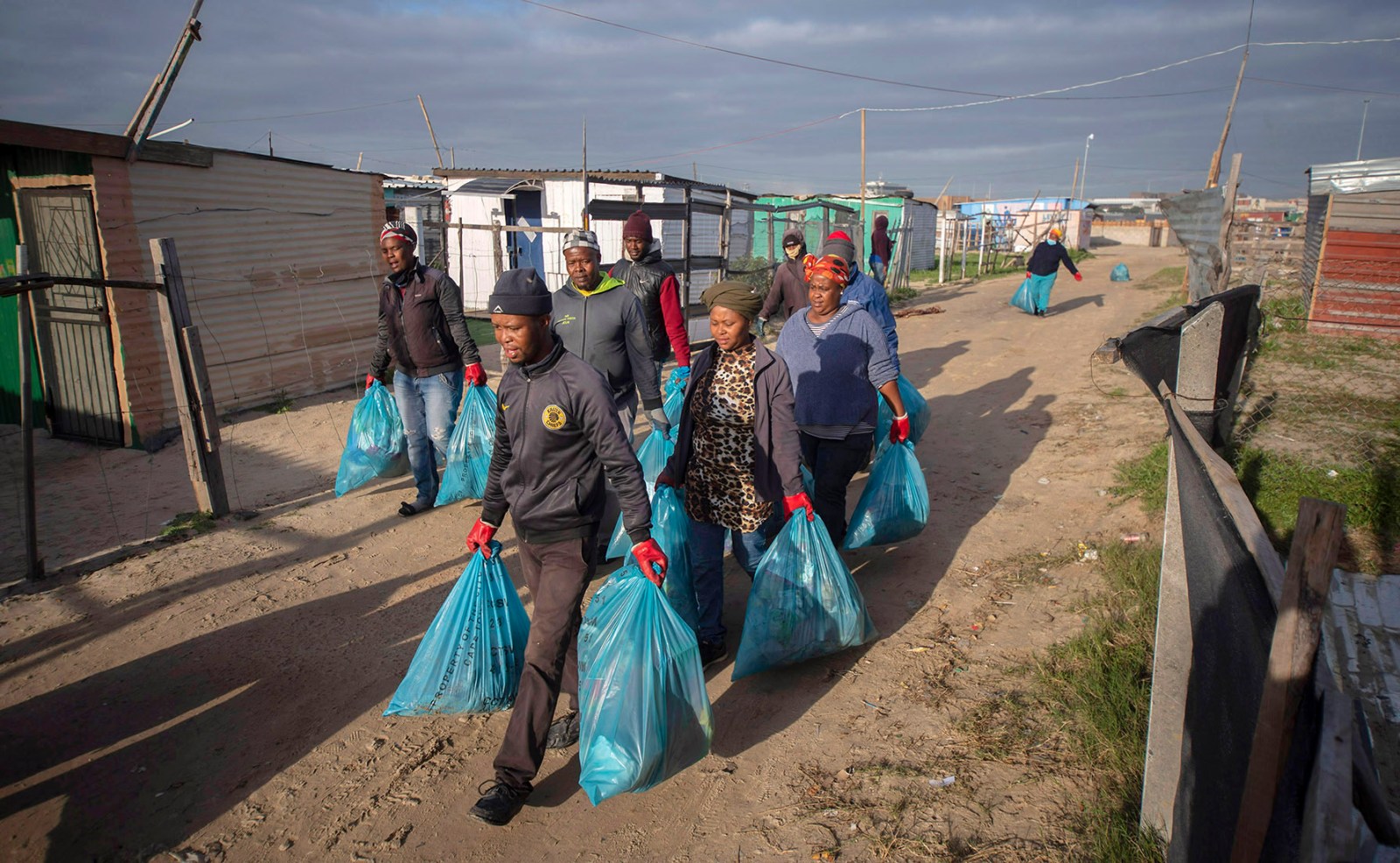 A group known as the Sikhuthaze project is providing voluntary waste removal services within the Level Two informal settlement. In a space that remains excluded from local government budgets and services, the initiative is working to provide a cleaner and safer environment for the community — and particularly its children.

A group of 15 volunteers from the Level Two informal settlement in Khayelitsha, Cape Town, is tackling waste in their community. Each day, they walk the paths between the settlement’s structures, collecting and bagging the refuse that builds up outside people’s homes.

In an area not catered for under the local municipality’s waste management system, the service they provide is vital.

Level Two is a relatively new informal settlement, having been formed after the onset of the pandemic in 2020. It is home to some 12,000 people, according to Mabhelandile Twani, a Level Two resident and chairperson of the Intlungu yaseMatyotyombeni movement.

The waste collection project — called Sikhuthaze, meaning “to be encouraged” — first began in July 2021, according to Mandla Bawuti, a representative of the initiative. Its members work on a voluntary basis, filling the gap in municipal waste removal efforts.

“We decided to start this initiative so that we can clean our area,” said Bawuti.

“What drove [the volunteers] is that they were not working, so they decided to come up and do something. Also, they wanted to stay in a safe and clean environment to avoid infections and diseases.”

When Maverick Citizen visited the community on Wednesday morning, the clean-up crew had just started to work their way along one of the main paths through the settlement, equipped with blue refuse bags and red gloves.

Nappies, plastic waste and food containers were among the garbage they collected. Before they had even reached one of the settlement’s main dumping areas — some 3o metres up the path — several bags had been filled.

“I realised that the environment has to be clean and I have to participate in the initiative, because if I’m not participating, the kids — including mine — will continue to play in a dirty space,” said Luvuyo Khutshwa, a member of Sikhuthaze, on why he joined the project.

Anathi Swartbooi, another member of Sikhuthaze, was also motivated to join the project because of her children. “My kids like to play and sometimes they find themselves in the waste. There are also hazards [in] that,” she said.

The clean-up crew meets at around 8am each day, says Bawuti. Level Two is divided into six areas, and the group usually focuses on one of these at a time.

They also visit the two dumping sites they have built within the settlement, where community members can leave their waste to be collected.

The bagged waste is placed in specific areas along the main roads around the settlement, where it is collected by the City of Cape Town’s waste management service.

Grant Twigg, the mayoral committee member for urban waste management, confirmed that the City removes refuse that accumulates on the periphery of Level Two on an “as-necessary basis”.

“The City commends the community for being proactive in this situation. Because this community was formed as a result of a land invasion, there is limited scope for the City to assist in the near future.

“Because the area is not yet on the list of established informal settlements, a budget cannot be assigned for new services or infrastructure. Official registration of the settlement will depend on the results of the human settlements assessment.”

Charles Arton, a private benefactor of the Sikhuthaze project, provides R100 to each member of the initiative for every day of work. He first began supporting the group in February, and has helped them with equipment such as work gloves and wheelbarrows.

“Since we’ve been involved, I drive out and I go and look at the areas and you can see a discernible difference between where [the Sikhuthaze project has] been working and where they haven’t been working,” said Arton.

“It really is like night and day after they’re finished in an area.”

The councillor for Ward 97, Mthwalo Mkutswana, met with Arton and representatives of the Sikhuthaze project on Wednesday to discuss improved coordination between the initiative and the City’s waste removal service, as well as the possible provision of refuse bags for the project.

“We’re working to expand [the initiative] and to make it bigger and better,” said Arton. He described Bawuti’s plans to provide additional support for elderly and disabled members of the community through the project, saying, “He’s kind of a… community worker.”

The project is able to generate a little money by selling the cans they collect at the local scrapyard, says Bawuti. Funding remains limited, however, and they are often under-resourced and over-exposed to the hazards that come with waste collection.

“You must expect the unexpected,” said Twani, emphasising that without proper protective equipment, the work can be unsafe.

“Sometimes you come across dead bodies. You can, for example, be ill because there is no medical aid in this work, and then you touch everything with your own hands,” he explained.

The initiative has an ongoing need for equipment such as safety gear and bins, according to Bawuti. Disposal of waste within the community is a challenge, as there are no proper refuse containers at the dumping sites.

In light of these struggles, Twani would like to see the City plan to provide better support and services in Level Two and other unlisted informal settlements.

“They avoid us and say, no, these places are not recognised… they were invaded and all that, forgetting that the reasons for us occupying the land is the crisis of housing, jobs and so on,” he said.

“It’s a question of them having the political will… saying ‘listen, we recognise these people are human beings too, and we are willing to take responsibility.’” DM/MC