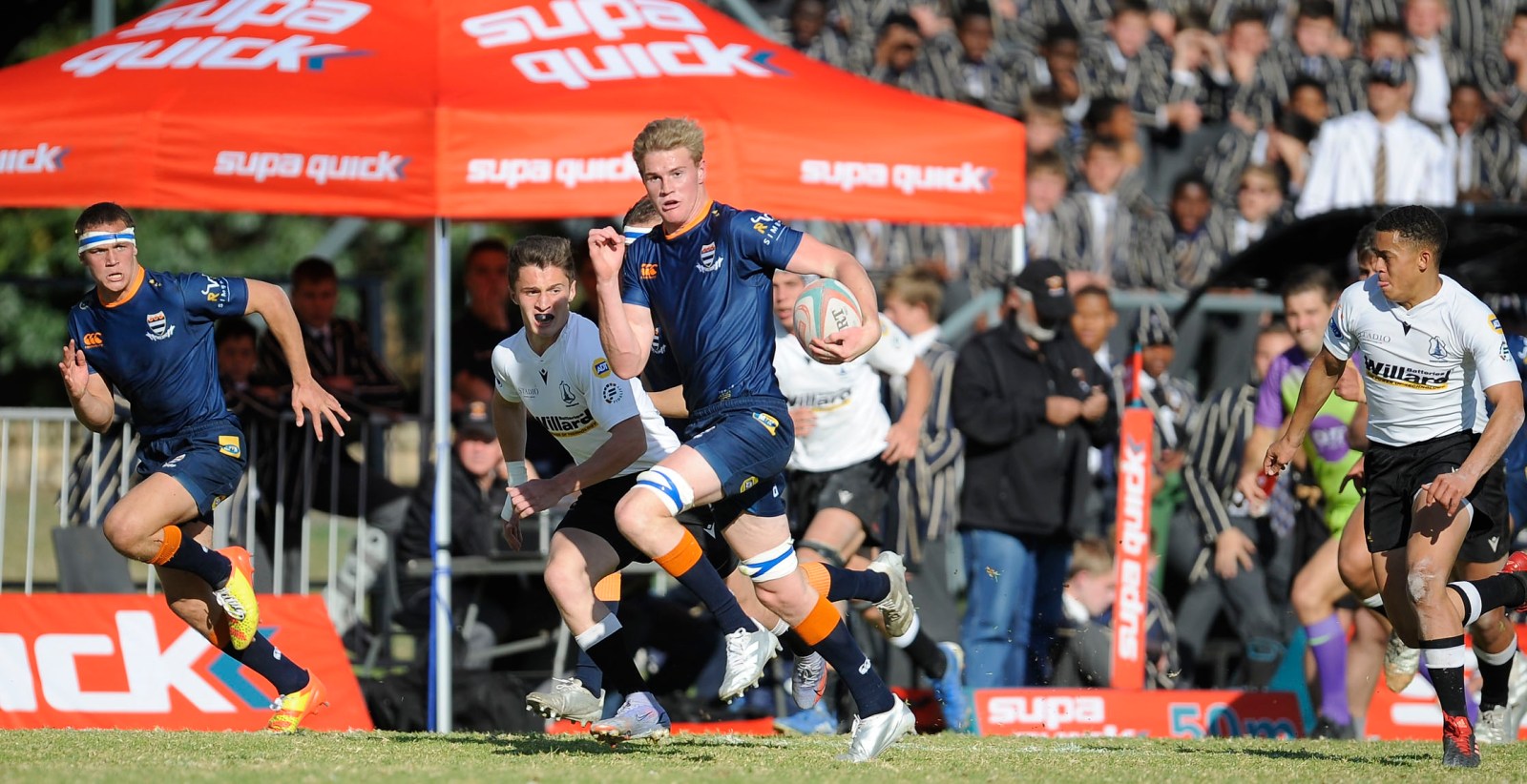 JJ Theron of Grey College during the Premier Interschools match between Grey College and Monument at Grey College on May 28, 2022 in Bloemfontein, South Africa. (Photo: Charle Lombard/Gallo Images)

The squad from Bloemfontien maintained their status as the top Schoolboy rugby team in South Africa with a convincing win over Gauteng’s top team — Monnas.

There was another thrilling weekend of schoolboy rugby as Grey College dominated in a renewed rivalry with Hoёrskool Monument. The Bloemfontein school, playing at home, came away as 41-17 victors over the boys from Krugersdorp.

“This is the first time we pick up the derby that ended in the mid-90s (when all teams from both schools meet — not just the first XVs), just before Covid we tried to pick up the derby again but then it got put on ice during the whole Covid period,” said Grey College high school coach Jannie Geldenhuys to Daily Maverick.

“For us, it’s just a huge privilege to be able to pick up the relationship with them [Hoёrskool Monument] again and to get the whole derby back on track. This was the first official derby since the mid-90s.”

There was a last-minute change in the Grey College lineup as electric winger Alfondso Isaacs missed out on the encounter.

“We monitored Alfondso the whole week but by Thursday when we did the last test, we realised the ankle is not stable enough, so we rested him, especially keeping an eye on Craven Week,” said Geldenhuys.

However, Isaacs’ replacement Martin Botha was a more than capable replacement, breaking lines and linking up play from the right wing.

“Luckily, Martin Botha — the wing who replaced him — came back from [having] chicken pox, he missed the Affies game last week due to illness. He was ready to step in,” said Geldenhuys.

The Grey team also had a change in captaincy for their derby clash as regular captain Tat Botha, came off the bench to put the finishing touches on a wonderful day in Bloemfontein.

Up stepped their backline leader, flyhalf Bradley Giddy, who led the team by commanding his troops through his boot, putting his team on the front foot by converting four of his side’s six tries and one penalty.

“Giddy is a very good leader himself, he’s also the vice-head boy of the school. He’s one of our big leaders and plays a big role in the leadership group of the team since the pre-season,” said Geldenhuys.

Most of Grey College’s dominance came through their charging forward pack, especially lock JF van Heerden who was awarded the man-of-the-match award.

“I think his (Van Heerden’s) dominance in the lineout gave us possession and put a lot of pressure on their lineout as well, giving them less possession and swinging the momentum in our favour,” said Geldenhuys about his big lock forward.

The spoils were shared between backs and forwards as three tries were scored by Grey College’s dominating pack.

However, scrumhalf, Caleb Abrahams had another special game week, scoring a terrific brace of tries through running fantastic supporting lines while the backline were able to exhibit some of their expansive gameplay.

“The foundation our forwards gave them, gives them time on the ball so they can express themselves. To get to this time of the season and through this hard period of the season and to still perform at this level, we’re very proud of them,” said Geldenhuys. DM