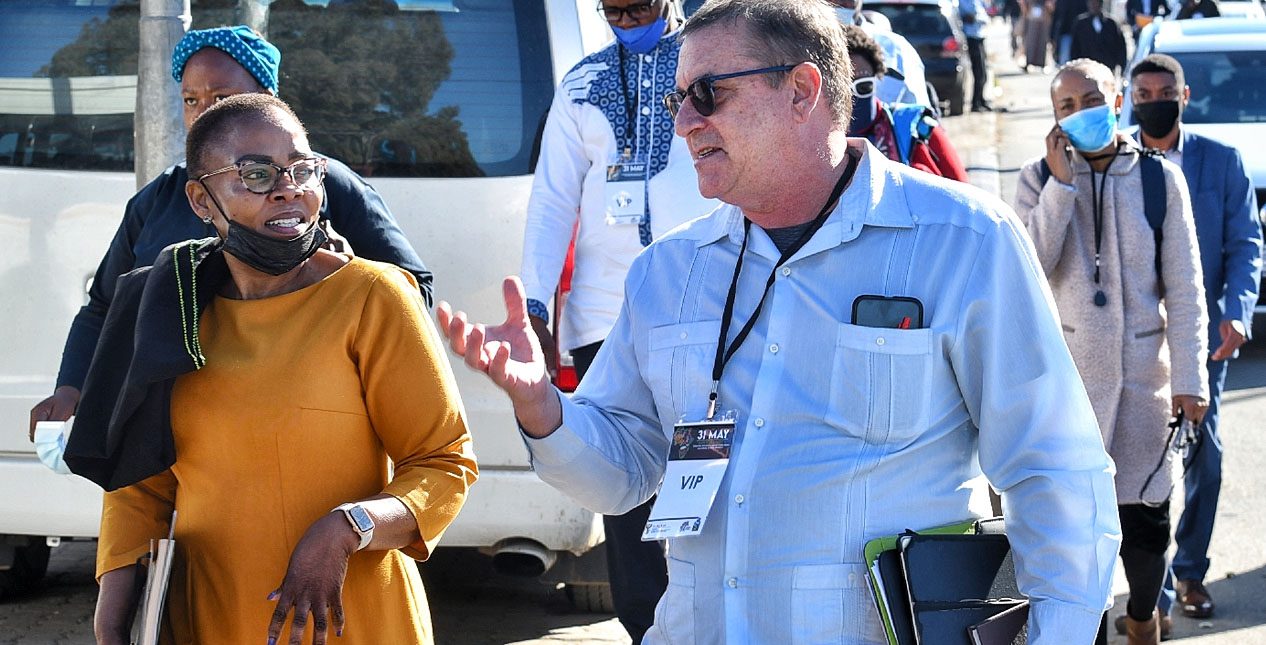 The Deputy Minister of Justice and Constitutional Development, John Jeffery (right) and Deputy Minister in the Presidency Pinky Kekana hosted a dialogue with the community of Diepsloot to commemorate Africa Month on 31 May 2022. The dialogue took place under the Africa month theme 'Africa Unite - towards building a society free from all forms of intolerances”. (Photo: Jairus Mmutle/GCIS)

Despite commitments by the government, including the planned opening of a family court and further engagements aimed at ending the crime and intolerance, community members are far from happy.

The community of Diepsloot has expressed disappointment at the government’s efforts to reunite its members after the community was left on a knife edge following several killings last month.

The community voiced their displeasure on Tuesday at the Diepsloot Youth Centre, during a dialogue spearheaded by the Department of Justice and Constitutional Development organised to commemorate Africa Month.

The dialogue happened a month after violence erupted in the area, leading to tensions running high in the community.

Nyathi was assaulted and set alight in an alleged act of vigilantism by some community members. The father of four died after his wife was unable to find R300 to give to his assailants. Nyathi’s alleged killers are out on R3,000 bail.

Nyathi was accused of committing crimes in the area, which some community members blamed on illegal foreign nationals. His alleged killers were charged with murder, robbery with aggravating circumstances, kidnapping, attempted murder, assault with intent to cause grievous bodily harm and extortion.

Cele deployed specialist SAPS members of the Tactical Response Team, an investigative team and members of the Public Order Police as well as 16 additional police cars.

However, despite commitments by the government, including the planned opening of a family court and further engagements aimed at ending the crime and intolerance, community members are far from happy.

“Cele’s police are not disruptive as was promised. Cele said the police deployed here would conduct random raids to root out criminals but I saw them just walking in a straight line,” said Diepsloot resident Josephine Mello.

Mello was not the only resident who expressed worry regarding a resurgence of the violence.

Resident and community leader Papi Sethekge said he feared nothing had been done and violence might erupt again.

According to the government, the focus of the dialogue was the promotion of community cohesion and harmony in the aftermath of violent tensions between South Africans and foreign nationals.

“The department, as the custodian of the National Action Plan to combat racism, racial discrimination, xenophobia and other related intolerances, has a mandate to educate citizens about their constitutional rights and upholding the rule of law,” a government statement on the dialogue read.

Two Diepsloot councillors called for the soon to be opened family court to prioritise the community for permanent jobs.

“We have talent here in Diepsloot but they do not have the support that they need from our government,” councillor Julius Maake said.

“We are here for Africa Month but we haven’t come here for long speeches… We’ve come here to listen to you and your issues that have to do with crime and justice,” said the Deputy Minister of Justice, John Jeffery.

“We hope that you’ll ask questions relating to the police, to correctional services, to the court and justice.

“We know you’ve got a lot of other problems in Diepsloot relating to service delivery… unemployment… poverty, but we mainly want to speak to you and hear your problems around crime and justice,” said Jeffery.

Jeffery said the new court would also provide domestic violence services to shield women from abusive partners. He said the court services would begin on 1  July.

“We will see if we can extend the services. But because we don’t have a separate court, we will use the police station,” Jeffery said.

“We came to listen to the community to establish whether enough was being done to resolve the issues affecting them,” Deputy Minister in the Presidency Pinky Kekana said.

“We came to listen to our people because we know the majority of people who stay in Diepsloot are from the continent but also from South Africa.

“We had a stakeholder engagement already; there is a relationship that exists. The biggest challenge was the killings and we want to hear more from [the community] and see how we [can] join hands to assist,” said Kekana.

“The sad part is that when the community takes up arms, the government won’t be happy,” resident Siviwe Gumede said. DM