A dose of care to cure toxic reporting is a new prescri... 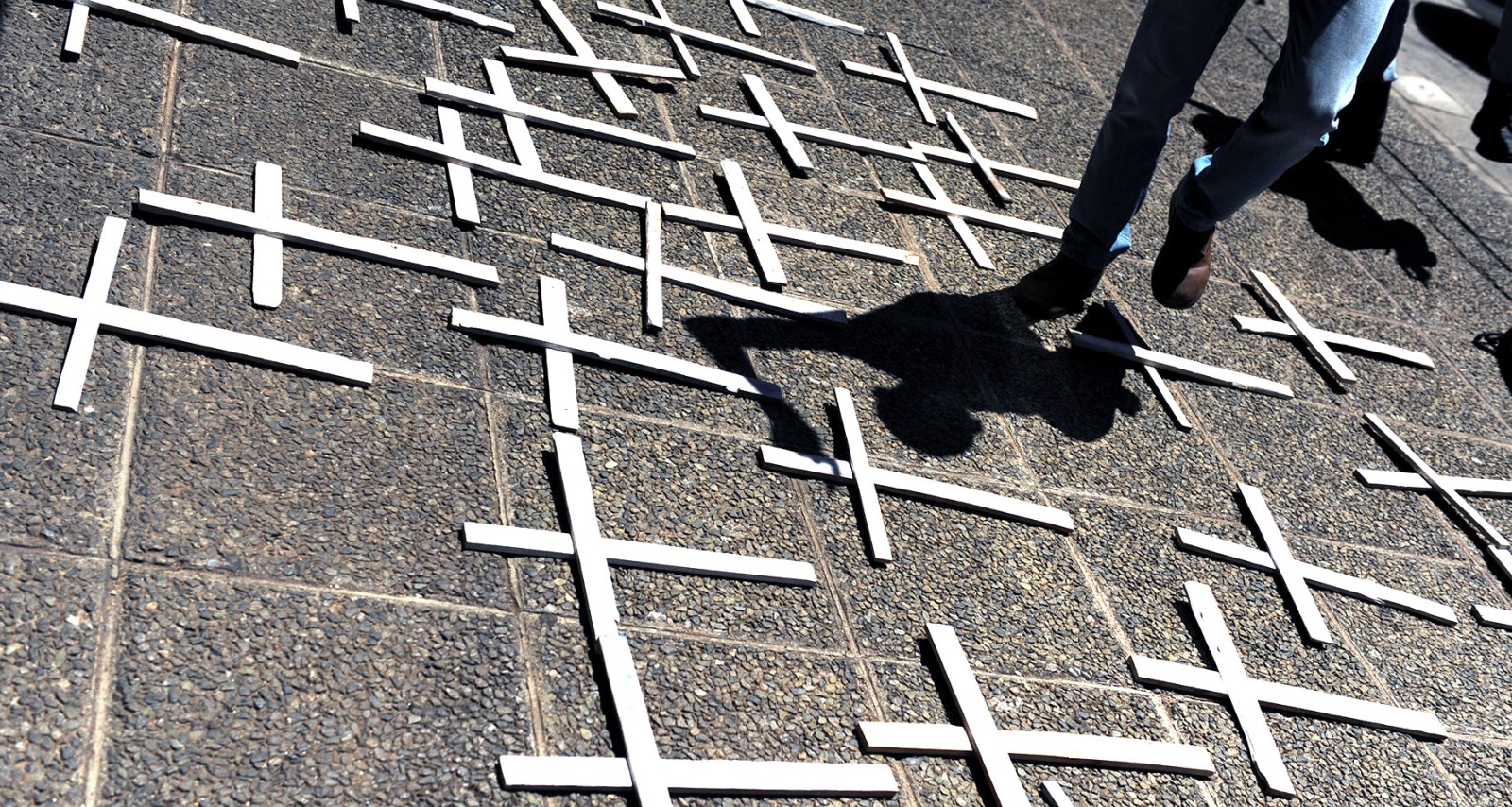 Families, relatives and residents gather in October 2016 for a prayer vigil in remembrance of the 37 psychiatric patients who died after being transferred from Life Healthcare Esidimeni facilities. Embracing care would have prompted reporters, out of concern and curiosity, to ask how far the authorities were in heeding the warnings that were meant to prevent the tragedy in 2015, says the writer. (Photo: Gallo Images / Beeld / Felix Dlangamandla)

It’s clear that the ‘old way’ of doing journalism has not been living up to the information needs of the 21st century. By taking a ‘care ethics approach’, journalists assess the vulnerability of the person on the receiving end of their work. Doing so may help unravel, bit by bit, entire systems that led to the challenges we now face.

I’ve finally plucked up the courage to find a GP on my limited medical aid network to get an appointment with a psychiatrist for a prescription to slow racing thoughts and halt relentless tears. They always give me that before I’m dispatched back into the world… like a non-fungible token for a song nobody understands.

This diary account presents a view into the world of a person we hardly ever hear or read about, mostly because the news media are primed to wait for the equivalent of a heart attack before doing anything at all.

Just over a month ago, Hollywood royal Will Smith reduced the global media’s collective blood flow with a violent public slap. A recently proffered opinion about this undeniably anachronistic act is that this behaviour is a manifestation of Smith’s mental health struggles.

Sometimes, cardiac arrests present as severe post-traumatic stress disorder and depression following the deluge of water in KwaZulu-Natal that stole hundreds of lives and destroyed homes and schools.

Other times, collective coronary arteries are blocked by geopolitical events such as the Russia-Ukraine war, its effects on supply chain disruptions and the corresponding rise in reports of mental illnesses among South African small business owners.

The hardened and blocked arteries of our time

Mental illnesses comprise a vast variety of disorders affecting the body’s most complex organ, proving tricky to treat because, most of the time, it is hard to pinpoint exactly how to respond. There just isn’t an equivalent catch-all treatment like ibuprofen or a cholesterol pill.

During the early part of the 20th century, the fields of psychology and psychiatry primarily focused on mental illnesses as a product of a series of physiological factors, overlooking mental states as valid pathological conditions. At some point, some researchers argue, the field of journalism’s path mirrored traditional psychology’s oversight, with a decidedly unyielding focus on all manners of societal conflict.

Were we to look closer, we would see that the stigma that comes with living with a mental illness is on record as one of its most debilitating burdens.

Due in part to plummeting circulation figures, newsroom staff and other resources, “critical reporting” morphed into “critical attitude reporting” with a penchant for citing everything that’s wrong. We need look no further than the Covid-19 pandemic as an example, with the average Google search revealing billions of news stories with twin common denominators: negative headlines and grim death toll statistics.

It is no secret that millions of people have chosen to tune the media out now that pandemics, climate change and racial inequity have drenched the world with torrents of too little, too late. The exposure to columns of toxicity has taken its toll.

Even before we started “emerging” from this pandemic, the field of journalism was being bludgeoned with the realisation that “the old way” wasn’t living up to the information needs of the 21st century.

The “carcasses of our prejudice, our avarice, our data banks and dead ideas” – Arundhati Roy’s most memeable contribution to our plight – lie before us now, hankering for unprecedented resolution.

As with any angioplasty, looking beyond the “problems” entails embracing complexity as well as engaging with our communities in ways that seek understanding. It is, in part, a matter of asking different questions, reframing and, whether you’re to blame or not, becoming the seeker of the purportedly lost heads, while still keeping yours.

In our pursuit of different journalistic instruments, I advocate for an additional tool with which we must do our jobs: a care ethics approach.

This approach is based on a normative ethical theory that holds that moral action centres on interpersonal relationships and care as a virtue.

The ethics of care, or care ethics, was developed by feminists in the second half of the 20th century in response to ethical theories that focused on justice, rules and duties. Its most distinguishing feature is reflected in the difference between two moral questions: instead of asking, “What is just?”, we could ask, “How should I respond?”

With care ethics, journalists may just unravel, bit by bit, entire systems that led to the challenges we face now at this critical juncture of human history.

Researchers argue that vulnerability provides the best anchor point for a care-based approach to reporting and thus an ethics of care is premised on the idea that the person at the receiving end is vulnerable.

In the context of constructive journalism, a care-based approach would specifically have journalists assess vulnerability in addition to other elements such as rhetorical and literary devices, headlines, images, stock phrases and sources used in a news story.

Embracing care would have prompted reporters, out of concern and curiosity, to ask how far the authorities were in heeding the warnings that were meant to prevent the Life Esidimeni tragedy in 2015.

With care ethics, journalists may just unravel, bit by bit, entire systems that led to the challenges we face now at this critical juncture of human history.

As public service providers, reporters would become indefatigable about finding feasible solutions on behalf of their reading and listening public.

The World Health Organization (WHO) estimates that of the one billion people around the world currently experiencing mental ill-health, more than 80% do not receive any form of care or treatment.

Diseases of the mind involve complexities that pose a potential threat to a great number of people in the world. Were we to look closer, we would see that the stigma that comes with living with a mental illness is on record as one of its most debilitating burdens. It won’t take long to deduce that very often, journalists were the authors of this pernicious script.

Her daughters issued a statement confirming that they’d lost their mother to the disease of mental illness – a relatively sensitive framing of her cause of death – and yet, like a clumsily packaged box of déjà vu, the answer to the most-Googled question, “What disease did Naomi Judd have?”, is a news report confirming her hepatitis C diagnosis in 1990.

If journalists embraced care in practice, a new moral standard based on human empathy would propel an active response to the needs of others, specifically if they are also considered vulnerable (which people living with mental illnesses often are).

Within the context of solutions-based journalism, advancing care may trigger recollections of the dramatic perspective shifts that occurred the time we fell in love or lost a family member. We will remember with hair-raising clarity, our off-kilter orientations… Our worlds were brighter or dimmer. Either way, we were prompted anew to find the courage to take that next crucial step. DM168

This article was first delivered at Stellenbosch University’s Department of Journalism World Press Freedom Day panel discussion on 3 May 2022.

Florence de Vries is a journalist, poet and communications specialist. She completed a master’s degree in journalism at Stellenbosch University in 2008 and is interested in concepts such as meaning-making and the ethics of care.