What has changed at Gauteng Health Department since damning 2020 Public Protector report? 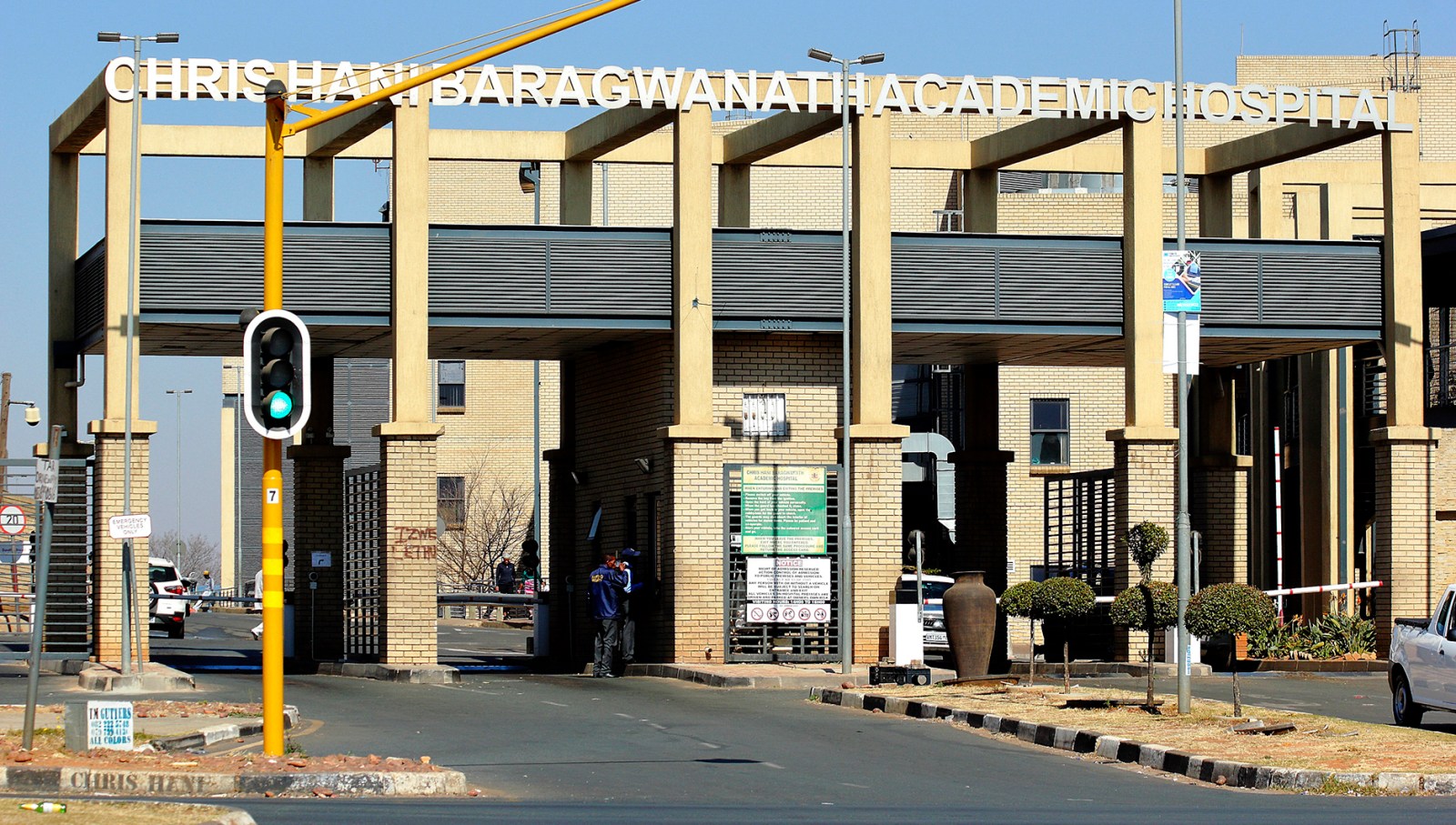 After visiting several hospitals in Gauteng in 2020, the Public Protector found that the Gauteng Health Department had failed to ensure appropriate conditions for the delivery of healthcare services. Ahead of the provincial health budget vote speech this week, Thabo Molelekwa looked at what has changed after the Public Protector’s recommendations and asked health experts what it would take to improve healthcare services in the province.

After a visit to several hospitals in Gauteng in 2020, the Public Protector (PP) concluded that the Gauteng Health Department had failed to ensure appropriate conditions for the enjoyment and delivery of healthcare services for the population of Gauteng.

Almost two years later, the situation in some of these hospitals appears to have deteriorated even further. This, despite the department claiming that it had implemented the PP’s recommendations and made improvements.

A team from the office of the PP visited several health facilities in Gauteng in 2020 and conducted site inspections to determine the state of readiness of hospitals to cope with the pandemic. The inspection involved random interviews with medical and nursing staff, organised labour and patients.

During the visit, the team expanded their inspection to examine a number of additional issues, including the availability of healthcare services, human resource challenges, physical infrastructure and vital equipment, machinery and the provision of personal protective equipment (PPE), as well as staff morale in hospitals.

When Spotlight asked PP spokesperson Oupa Segalwe about the Gauteng Health Department’s progress in implementing their recommendations, he said the PP’s office had not received any response other than acknowledgements that the recommendations had been received.

“Our compliance unit is following up with those who must implement the remedial action,” said Segalwe.

Spotlight put some of the PP’s recommendations to the Gauteng Health Department and asked for an update on their implementation.

One of the recommendations was for the department to fix supply chain issues. The then acting head of department, Dr Sibongile Zungu, had 30 days after the PP report was published to ensure that the department’s supply chain management unit was reassessed to determine if it had the capacity to respond to the procurement needs of the province’s hospitals.

Zungu had to determine and resolve what was causing the delays within the supply chain management process with regard to procuring, maintaining and delivering medical equipment to hospitals in the province.

It is unclear if that was done, since the department only responded to some questions.

Some of the issues the PP report flagged were occupational health and safety hazards at some of these health facilities, especially due to infrastructure challenges and poor maintenance.

Responding to questions from Spotlight, Gauteng Health spokesperson Kwara Kekana said there is a risk committee that does monthly risk assessments related to structural challenges, including loose hanging ceilings and hanging electrical wires.

These monthly risk assessments also include assessing security challenges such as the functionality of CCTV cameras, safety and security of patients and staff and availability of security guards.

It also includes occupational health and safety challenges such as removal of medical waste, availability of PPE and protective clothing for staff members and any other factors that may pose a risk to the working environment, says Kekana.

Singling out the Jubilee District Hospital and the occupational health and safety projects, Kekana said the infrastructure priority list was done and had been submitted by hospital management to the Gauteng Health Department and the Department of Infrastructure Development (DID) in April 2021.

She said engineers did not do a conditional assessment in the previous financial year (2021/22), but that Jubilee had an occupational health and safety project which started in July 2021. This project, she says, has a detailed plan which is led by the DID and the Health Department.

The PP report also asked the department to devise a plan on how it will resolve the human resources capacity challenges at some of the health facilities.

In respect of Lillian Ngoyi Community Health Centre, the PP recommended that Zungu take appropriate steps to ensure that, within 30 working days, there were enough doctors on duty to provide medical care to the patients and have a dedicated roster to monitor adherence to the facility’s prescribed waiting times in line with the ideal clinic framework.

The report did not specify a number, but according to Kekana, there are currently nine doctors at Lillian Ngoyi Community Health Centre.

“She had been working as a professional nurse since 1995, which translates to 27 years of nursing service,” Kekana says.

This week, ahead of the health budget vote in the Gauteng legislature, transport and road infrastructure MEC Jacob Mamobolo said the administration will, in this financial year, invest about R3-billion to refurbish hospitals in the province.

This could potentially go some way in addressing the challenges flagged by the Public Protector.

“Our health and safety programme has received a lot of money,” said Mamobolo, “and will be implemented in 15 priority hospitals across the province.”

He said the money will be made available by the provincial health department and the infrastructure department will be implementing it.

“Through this programme, we will refurbish hospitals to improve safety ratings and to reduce maintenance backlogs that have accumulated,” he said.

But some health experts maintain that even though the Gauteng Health Department says they have addressed some of the issues flagged in the PP’s report, the problems facing the department are far-reaching and go beyond just a few recommendations.

In an interview with Spotlight, Dr Aslam Dasoo of the Progressive Health Forum had his own diagnosis of the challenges plaguing Gauteng Health.

“As political hegemony develops within provinces, they have the right to distribute the funds (budgetary allocations) and put whoever they want as heads of the departments,” Dasoo says.

“As that develops, so too does the dissipation of policy. Suddenly, almost every province is running its own thing in its own way. And then two other problems emerge – you don’t have proper management or properly trained managers who are accountable to the civil service.

“They are usually appointed for political reasons and that’s mainly to facilitate the corruption of healthcare funds.”

“The Gauteng provincial government is riddled with criminal syndicates … If you take the Charlotte Maxeke fire as an example, it’s a year since that fire took place. The most well-resourced province in the country can’t fix one hospital in a year,” he says.

“A year later – after many protests, many deaths, a lot of illness and a lot of preventable dying – there’s some movement at Charlotte Maxeke because the national Health Department has stepped in.”

According to Dasoo, the deterioration in the public health system has been accompanied by an escalation in private care.

“It’s used on other things – which are not always legitimate things.”

“You can’t get those doctors back, because who would want to go into Helen Joseph Hospital, which was seeing the overflow from Charlotte Maxeke [after the fire]? They were seeing all of Charlotte Maxeke’s psychiatric patients … 30 to 40 at a time,” he says.

“Helen Joseph Hospital didn’t have water last year. It took Gift of the Givers to come and drill a borehole … The mighty Gauteng government couldn’t even drill a borehole.

“So, when you walk into Helen Joseph while this is happening, it’s like walking into a medieval horror show in the most industrialised city on the continent.

“It’s not proper and it’s not tenable. We can’t accept this. It is so off the wall. It’s so abnormal.”

He says it takes leadership to be able to fix a broken healthcare system such as that in Gauteng.

“And it’s not going to happen in this [PP] review. I can tell you, that deterioration is continuing,” Dasoo says. 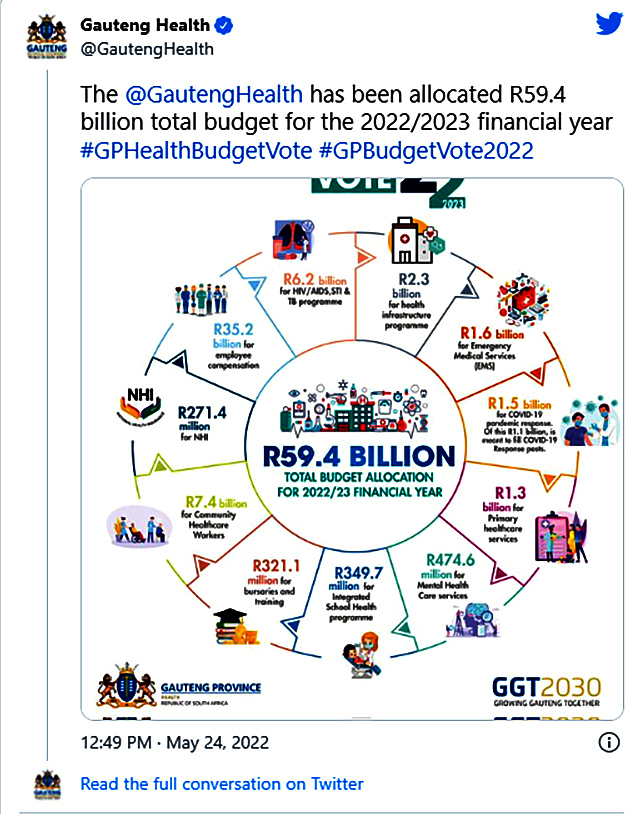 Rensburg tells Spotlight that the department’s challenges can only be solved with a proper evaluation of what the health system does with the money (allocated to them) and identifying where the province has inefficiencies.

Rensburg says it is important that government looks at what the health system delivers and what healthcare people need.

“The next step is to look at the efficiency of our large hospitals. To what extent are those hospitals delivering the services that they are funded for?

“So, I think the only way forward for us is to do an assessment of how the health system delivers; how it can deliver better with the available funding, and how it can make the primary healthcare system, most importantly, more accessible to a larger percentage of the population,” Rensburg says.

“At the bigger hospitals, we need to make sure that they do what they were designed to do – and that they are running effectively and efficiently.” DM/MC