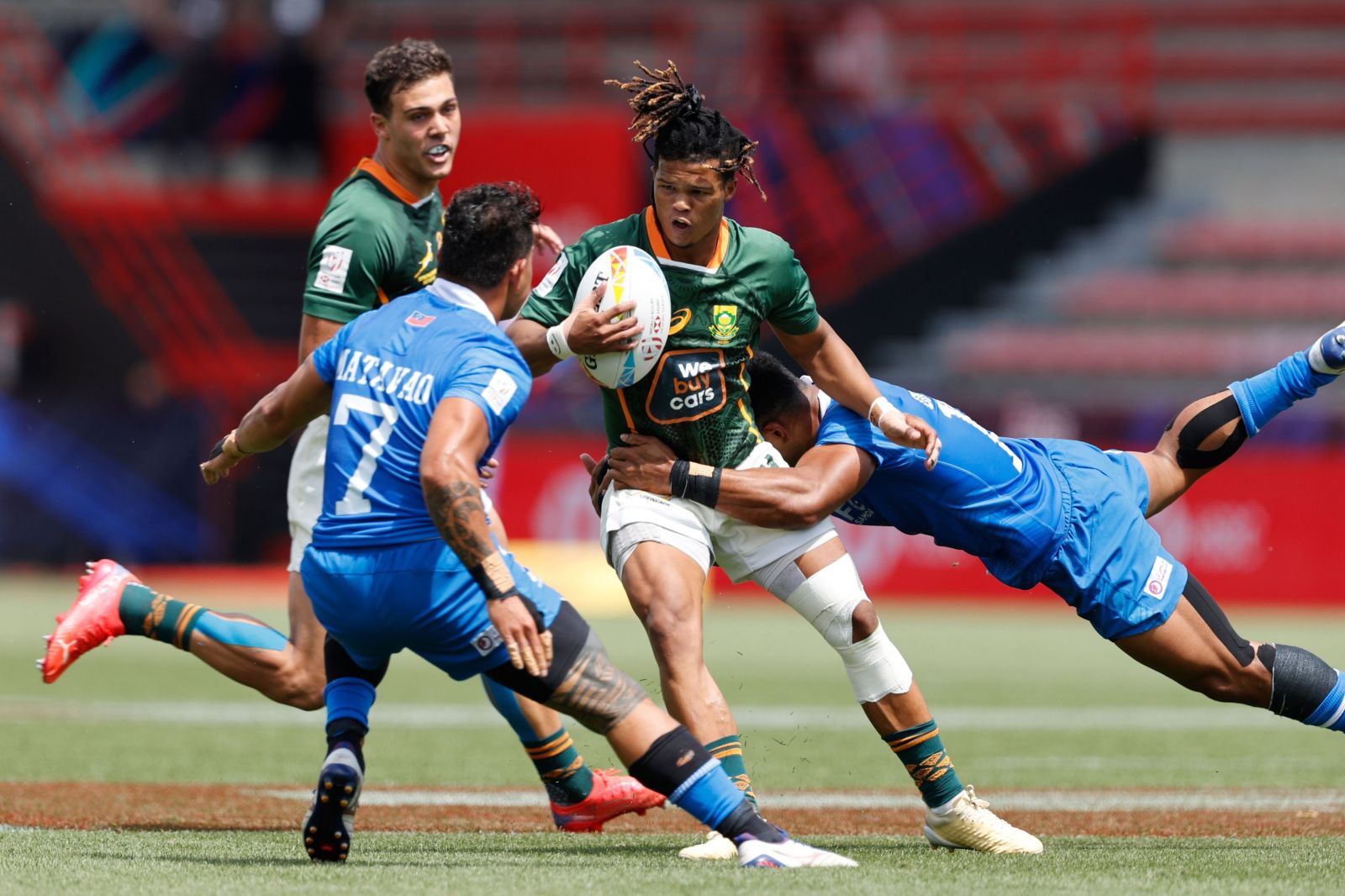 The Blitzboks’ recent decline in form reached new depths in Toulouse this weekend. The reigning World Sevens Series champions endured their worst tournament in years as they failed to reach the quarterfinals for the first time since Hong Kong in 2013.

“It is almost as if the players had forgotten what their roles and responsibilities are, and that put the system under pressure. Every player — and management as a matter of fact — will have to look at themselves seriously and ask why they are not contributing as they were earlier in the season,” said a perplexed Blitzboks coach Neil Powell.

While the Blitzboks stumbled and fumbled, Fiji went unbeaten all weekend in Toulouse as they secured their second victory of the series after winning in Singapore last month. The Fijians saw off a spirited Irish outfit 29-17 in the final on Sunday at the Stade Ernest-Wallon.

The final was tightly contested as Fiji went into halftime with a slender 14-12 lead. However, Fiji showed their athleticism and class in the second half as they scored three consecutive unconverted tries by Josua Vakurunabili, Elia Canakaivata and Kaminieli Rasaku to stretch their lead to 29-12.

Ireland finished an incredible weekend on a high note as they eventually scored a consolation try thanks to elusive running by Jordan Conroy to finish in the corner and restore some parity.

For South Africa, the warning signs flashed in the very first match of the tournament on Friday, when Ireland beat them 21-12 — Ireland’s first win over the Blitzboks. That put the Springbok Sevens on the back foot immediately.

On day two the Blitzboks thumped Spain 27-7 in their second group game to give themselves hope of qualifying. However, Samoa ended their ambitions when they convincingly beat the South African outfit 19-7 in their final pool match.

“It is disappointing that we could not make the quarterfinals, but we just made too many errors against Samoa to put ourselves in a position to win,” said captain Siviwe Soyizwapi.

The Springbok Sevens then beat Japan 40-0 in the ninth-place quarterfinal clash to set up a meeting with Scotland in the ninth-place semifinal play-off on Sunday. They fell to their third loss of the weekend when the Scots won comfortably 24-10 to end the Blitzboks’ worst weekend of this season’s World Series by far.

“This is a tough sport and if you make one mistake, you pay the price,” said Soyizwapi.

“At times, you need some luck or the bounce of the ball to go your way, but today it did not go our way. It is true though that we are not playing as well as we could and that is something the players need to fix. The coaching staff prepared us well for each match, but somehow we failed to execute properly.”

The Blitzboks went into the weekend at Toulouse with a six-point lead in the overall standings with Argentina the closest team trailing them. However, the abysmal results for the South Africans meant they picked up only five points from the weekend taking their tally to 116.

“This is the worst performance by the team since I took over, no doubt, and there (is) very little to be happy about in this performance we delivered here,” said Powell. “We dropped the team as individuals and the team did not function as a unit. That is very disappointing.”

The Springbok Sevens picked up a maximum of 88 points in the first four tournaments (22 points per tournament) as they were champions in Dubai twice, Malaga and then Seville. They have slumped since then, claiming only a collective 28 points in the next three tournaments in Singapore, Vancouver and now Toulouse.

Powell, however, remains optimistic that the Blitzboks can still claim the World Series title.

“It is a tough series, and a number of teams did not perform as expected. New Zealand also did not get out of their pool and Argentina and Australia both lost their Cup quarterfinals. It is almost as if the teams are becoming a bit jaded. That certainly is making the World Series race very interesting.”

The squad will depart for London on Monday and replacements for the injured JC Pretorius (broken thumb), Tiaan Pretorius and James Murphy (both leg muscle injuries), will join the team in England, Powell confirmed.

In the women’s section, South Africa and Scotland played in Toulouse as the two invitational teams to join the other 10 core teams for the final leg of the Women’s Sevens Circuit.

New Zealand thumped series champions Australia 21-14 in the final, only the second time Australia failed to go home as champions of the weekend event of this series as they collected podium finishes at every event.

Despite losing 24-10 to Scotland in their final match of the France Sevens tournament in Toulouse on Sunday, the 10th-place finish achieved by the Springbok Women’s Sevens team was a massive result for the Imbokodo.

The South Africans finished ahead of Spain and England, both core teams in the 2022 World Series, and that was exactly what Springbok Women’s Sevens coach Paul Delport had hoped for.

“We came here — our first World Series tournament since the 2019 Cape Town Sevens — hoping to knock a core team over and finish at least 10th of the 12 teams participating,” said Delport.

“We managed that when we beat Spain yesterday and although we disappointed ourselves in our effort against Scotland today, we return to South Africa with our objectives reached.

“We came to learn from the best teams in the world and we did by playing Australia, USA and Fiji in the pool, before really focusing on beating Spain. It is a pity we came up short against the Scots, but they just wanted it more today.

“We did well on day one against the World Series winners, Australia, and especially against the USA. The match against Fiji was always one for building depth in our squad and we targeted Spain and got that win that created such positive energy in the team,” said Delport. DM