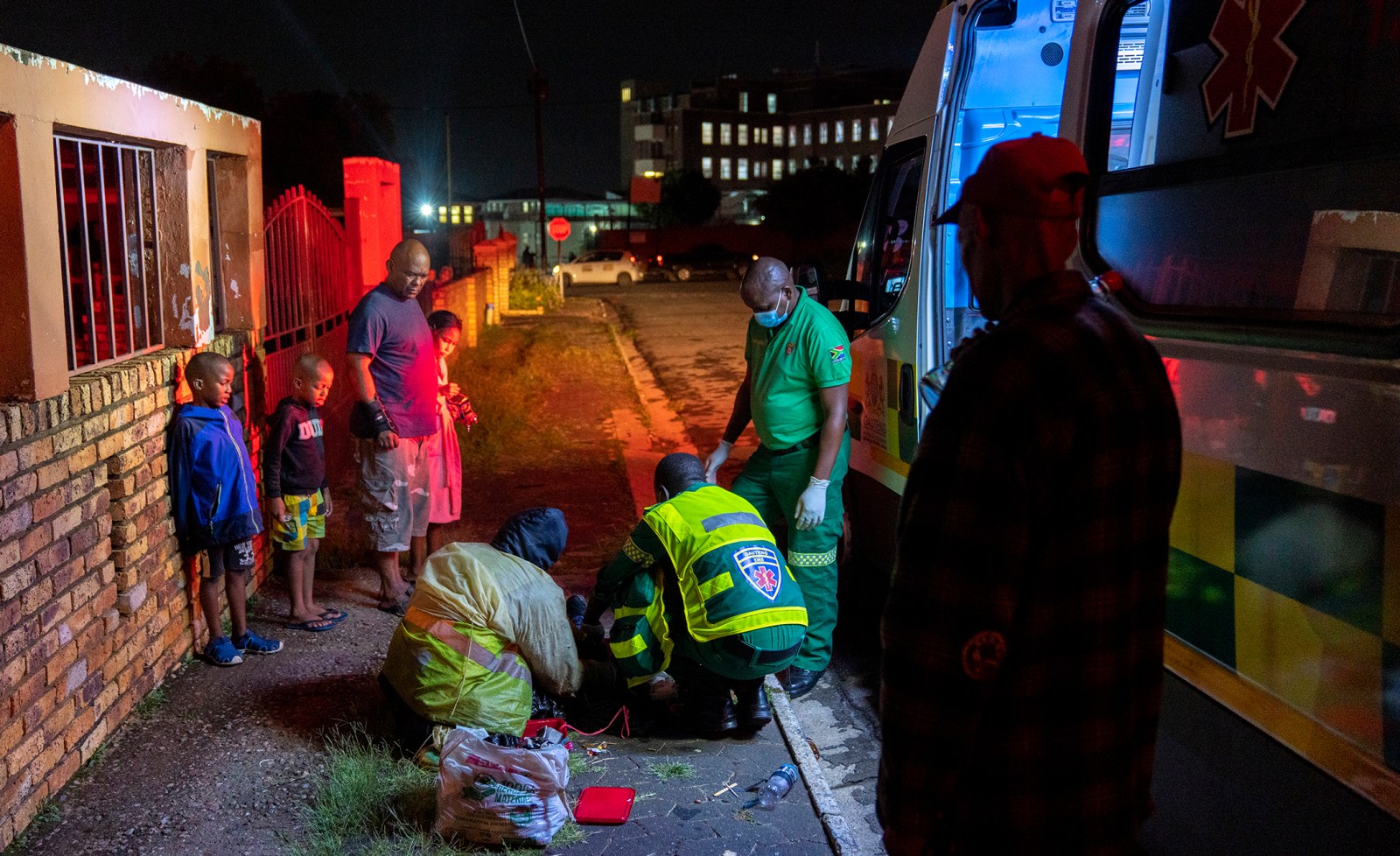 After an increase in attacks on paramedics, Daily Maverick was granted permission to spend a few night shifts with them.

Paramedic Alfeus Mngomezulu reverses his ambulance out of their base in Hillbrow, Johannesburg. Mngomezulu and his partner, Basetsana Maleke, are en route to Denver, Johannesburg, to make a declaration (pronounce someone dead) for a double murder.

Before the call from Denver came, Mngomezulu described in detail how he escaped an attack in Vrededorp, Johannesburg, also while making a declaration. With his words still lingering, the mood in the ambulance is sombre as he drives to the scene. Conversation is minimal. This is a red zone and paramedics will not enter it unless escorted by the police.

At the scene, one victim lies on the pavement, his lifeless body surrounded by spent cartridges. The area is cordoned off by yellow police tape. A group of beer-sipping men stand and watch from several metres away. The ambulance parks in front of them, red lights flashing. Metres away, in what appears to be a parking area for taxis, the second victim lies on his stomach. Blood seeps from his head.

It is past midnight, but there are scores of people on the street. Passersby stop to look before continuing on their way, seemingly desensitised to the​ scene. Police guard the paramedics. One stands with his R5 rifle strapped to his chest.

Mngomezulu gets to work, examining both bodies. Once satisfied, he proceeds to fill out the necessary paperwork as he declares both victims dead.

He points to the group of men in front of the ambulance.

“See these guys… what would happen if me and Basetsana had to come here for an assault case and there was no SAPS to escort us?”

Phindile Khumalo has been a paramedic for the past 11 years.

You must have a strong heart for this job,” said Khumalo. “Every time I come on shift, I know [something bad] might happen to me. It worries me that I am leaving my kids at home, but the main thing is saving lives — it was what we were trained for.”

Earlier this year, paramedics were attacked by three armed men in Reiger Park, Boksburg, while responding to a call of a woman in labour. They were robbed of their cellphones and wallets. Shortly after the attack, Gauteng paramedics took to the streets of Reiger Park in an attempt to create awareness of the attacks on ambulance crews.

A few weeks later, paramedics responded to a call of a person being attacked in Eersterust, Pretoria. The crew were trying to stabilise their patient’s bleeding in the back of their ambulance when gunmen forced them to open the vehicle and robbed them of their personal and departmental cellphones.

Recently, in Mpumalanga, an ambulance crew was held hostage after responding to a hoax call for help. Their ambulance was stripped of its gearbox, engine, two tyres and its battery. The estimated value of the stolen parts is R300,000.

Recent attacks in Gauteng include the attempted sexual assault of a female paramedic in Tembisa; paramedics robbed at gunpoint in Alexandra, north of Johannesburg, a paramedic robbed of a cellphone in Diepkloof, Soweto, and the stoning of an ambulance in Eldorado Park.

Paramedic Godfrey Hobwane, who is based in Discovery on the West Rand, said: “It’s bad going there at night. Some of the areas, we no longer go in there, like squatter camps… they attack you while you are busy treating a patient. There are no roads there, so we normally wait in a safe area. It’s really not safe. But we make sure that we do help them. We don’t leave them out.”

Paramedics rely heavily on police escorts to ensure their safety, but when police are not available, they have to wait, which affects their response time in treating a patient.

Bongani Ngubale, also based in Discovery, told of an incident where they were unable to enter an informal settlement because their police escort was late. They needed to treat three gunshot victims and found a group of community members waiting at the entrance to the informal settlement.

Two of the victims had already been taken to the Rahima Moosa Mother and Child Hospital in Coronationville, but the third still needed medical assistance. The community members were angry at having to wait for the ambulance and demanded that the paramedics enter the informal settlement without any escort.

“They did not want to listen to us. The community was furious — they said the person is dying and [they] did not want to hear of a police escort. They forced us to go in. You cannot reason with someone who is drunk, angry or frustrated,” said Ngubale.

He and his partner found the victim had sustained gunshot wounds to the neck and head.

“She was gasping as she took her last breath. There was nothing much we could do.”

Protocol dictates that a declaration be performed and the body removed by pathology services. But, fearing for their lives, Ngubale and his partner loaded the body into their ambulance, taking it to a place of safety where the declaration was performed.

“I was very scared, I won’t lie. If you see a group of people, more than 40 people surrounding the ambulance — some are drunk and some are even banging on the ambulance — wouldn’t you be scared? You just figure out a way to get out of that situation.”

The Gauteng Emergency Medical Services (EMS) offers counselling to their paramedics by chaplains and counsellors contracted to the Gauteng Department of Health.

Measures have been implemented to ensure the safety of ambulance crews. These include panic buttons on ambulances and engagement with community policing forums, ward councillors and community leaders.

They also have educational walks and mass mobilisations against paramedic attacks. Despite this, they decry the lack of arrests of criminals who rob EMS workers, as the attacks continue and questions remain as to what the government is doing to protect EMS personnel.

Police reports reveal that between the third and fourth quarter of 2021, attacks on paramedics included physical assaults, being robbed at knifepoint and gunpoint, and having their ambulances pelted with rocks by community members.

“People are dying,” said Ngubale. “We don’t just take this as work — to some of us it’s personal. Help us save lives.” DM