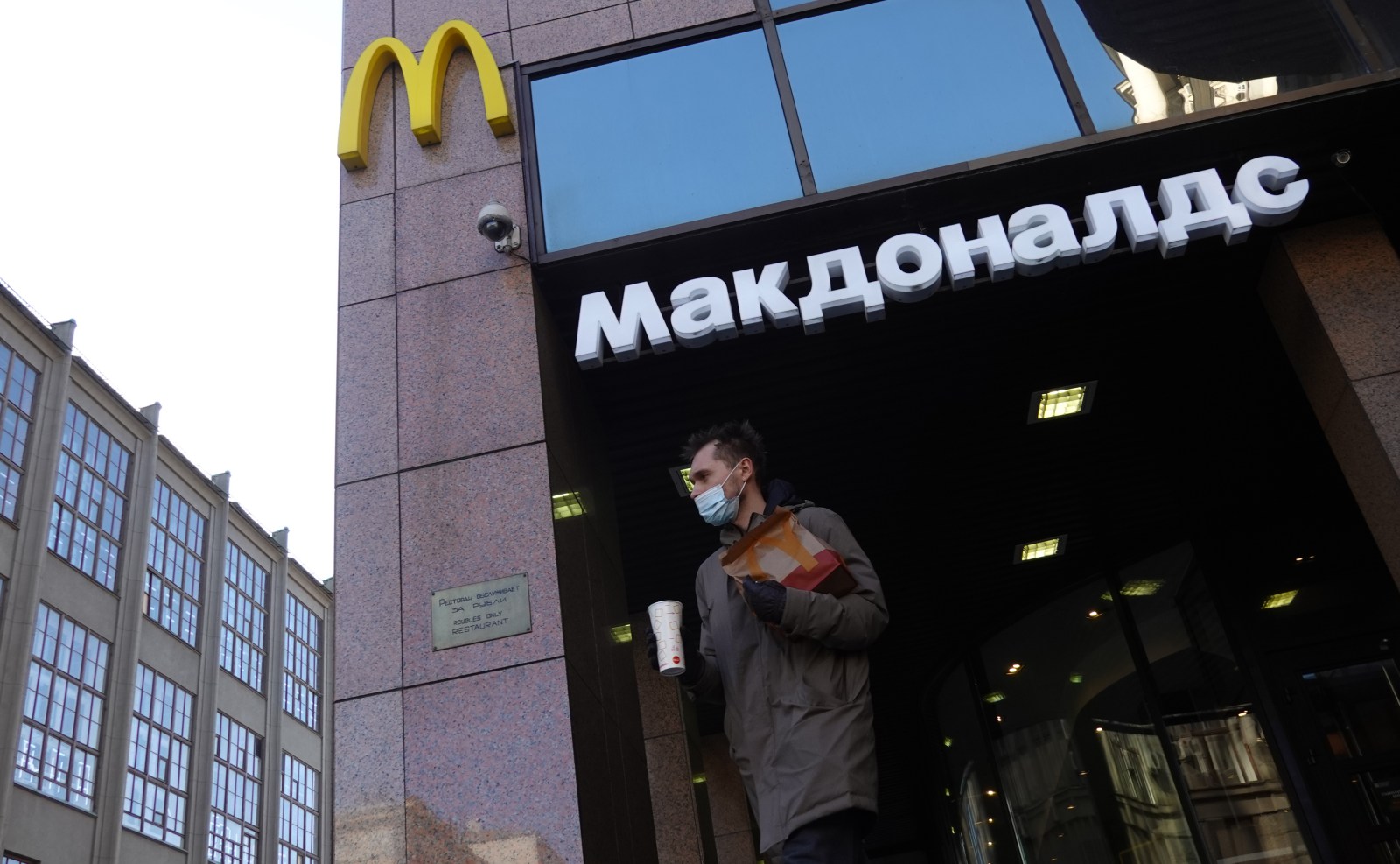 A view of a McDonalds restaurant in Moscow, Russia, 10 March 2022. EPA-EFE/MAXIM SHIPENKOV

RUSKA LOZOVA, Ukraine/KYIV, May 16 (Reuters) - Ukrainian troops have pushed Russian forces back from the northeastern city of Kharkiv and some have advanced as far as the border with Russia, Ukrainian officials said on Monday.

The developments, if confirmed, would signal a further shift in momentum in favour of Ukraine nearly three months into a conflict that began when Russia sent tens of thousands of troops over the border into Ukraine on Feb. 24.

Sweden meanwhile was expected to take a formal decision on Monday to apply to join NATO following a similar move by Finland – a change in the Nordic countries’ long-standing policy of neutrality brought on by the Russian invasion and concern about President Vladimir Putin’s wider ambitions.

“Europe, Sweden and the Swedish people are living now in a new and dangerous reality,” Swedish Prime Minister Magdalena Andersson said during a debate in parliament in Stockholm.

Moscow warned of “far-reaching consequences” should they should go ahead.

And in another setback for Putin, McDonald’s Corp MCD.N, the world’s largest fast food chain, said it was pulling out of Russia because of the conflict.

In Brussels, the European Union was working on a package of further economic sanctions on Russia to step up international pressure on Putin.

“It can no longer be stopped… Thanks to this, we can go to the rear of the Russian group of forces,” he said.

Kharkiv, lying about 30 miles (50 km) from the border with Russia, had endured weeks of heavy Russian bombardments. The Russian retreat from the city follows their failure to capture the capital Kyiv in the early stages of the war.

But thousands of people, including many civilians, have been killed across the country, cities have been blasted into ruins, and more than six million people have fled their homes to seek refuge in neighbouring states in scenes not seen in Europe since the Balkan wars of the 1990s. Russia denies targeting civilians.

Ukraine’s defence ministry said on Monday the 227th Battalion of the 127th Brigade of Ukraine’s Territorial Defence Forces had reached the border with Russia.

Kharkiv region governor Oleh Sinegubov said the troops had restored a sign on the border.

“We thank everyone who, risking their lives, liberates Ukraine from Russian invaders,” Sinegubov said.

Reuters could not verify Ukraine’s account and it was not clear how many troops had reached the Russian border or where.

If confirmed, it would suggest the northeastern counter-offensive is having increasing success after Western military agencies said Moscow’s offensive in two eastern provinces known as the Donbas had stalled.

Konrad Muzyka, director of the Poland-based Rochan consultancy, said he was not surprised at the Ukrainian gains.

“The Ukrainians have been in the border regions for a few days already,” he told Reuters. “It’s symbolic and it definitely has PR value, but this was to be expected.

“Don’t get me wrong, the Russians still enjoy overall artillery superiority in terms of numbers, but I’m not sure if the same goes for the quality now.”

The governor of the Luhansk region in Donbas, Serhiy Gaidai, said the situation “remains difficult”, with Russian forces trying to capture the town of Sieverodonetsk.

He said leaders of the Lugansk People’s Republic, the territory in Luhansk controlled by Russian-backed separatists, declared a general mobilisation, adding it was “either fight or get shot, there is no other choice”.

In the south, fighting was raging around the city of Kherson and Russian missiles struck residential areas of Mykolayiv, the presidential office in Kyiv said. Reuters was unable to verify the reports.

In a blow for Russia, which has long opposed NATO expansion, Finland and Sweden moved ahead with plans to join the alliance.

But Russia’s deputy foreign minister, Sergei Ryabkov, said on Monday that Finland and Sweden were making a mistake that would have far-reaching consequences.

“They should have no illusions that we will simply put up with it,” Ryabkov said, quoted by the Interfax news agency.

Moscow calls its invasion of Ukraine a “special military operation” to rid the country of fascists, an assertion Kyiv and its Western allies say is a baseless pretext for an unprovoked war.

The most intense fighting appeared to be around the eastern Russian-held city of Izium, where Russia said it had struck Ukrainian positions with missiles.

There was also no letup on Sunday in Russia’s bombardment of the steelworks in the southern port of Mariupol, where a few hundred Ukrainian fighters are holding out weeks after the city fell into Russian hands, the Ukrainian military said.

Ukrainian President Volodymyr Zelenskiy said “very difficult and delicate negotiations” were going on to save Ukrainians in Mariupol and Azovstal.

McDonald’s said it had started the process of selling its restaurants in Russia, following many other Western companies who are getting rid of their Russian assets to comply with international sanctions.

The decision to close its 847 restaurants in Russia marked the retreat of a Western brand whose presence there had been emblematic of the end of the Cold War.

“The humanitarian crisis caused by the war in Ukraine, and the precipitating unpredictable operating environment, have led McDonald’s to conclude that continued ownership of the business in Russia is no longer tenable,” McDonald’s said.

By Jonathan Landay and Tom Balmforth