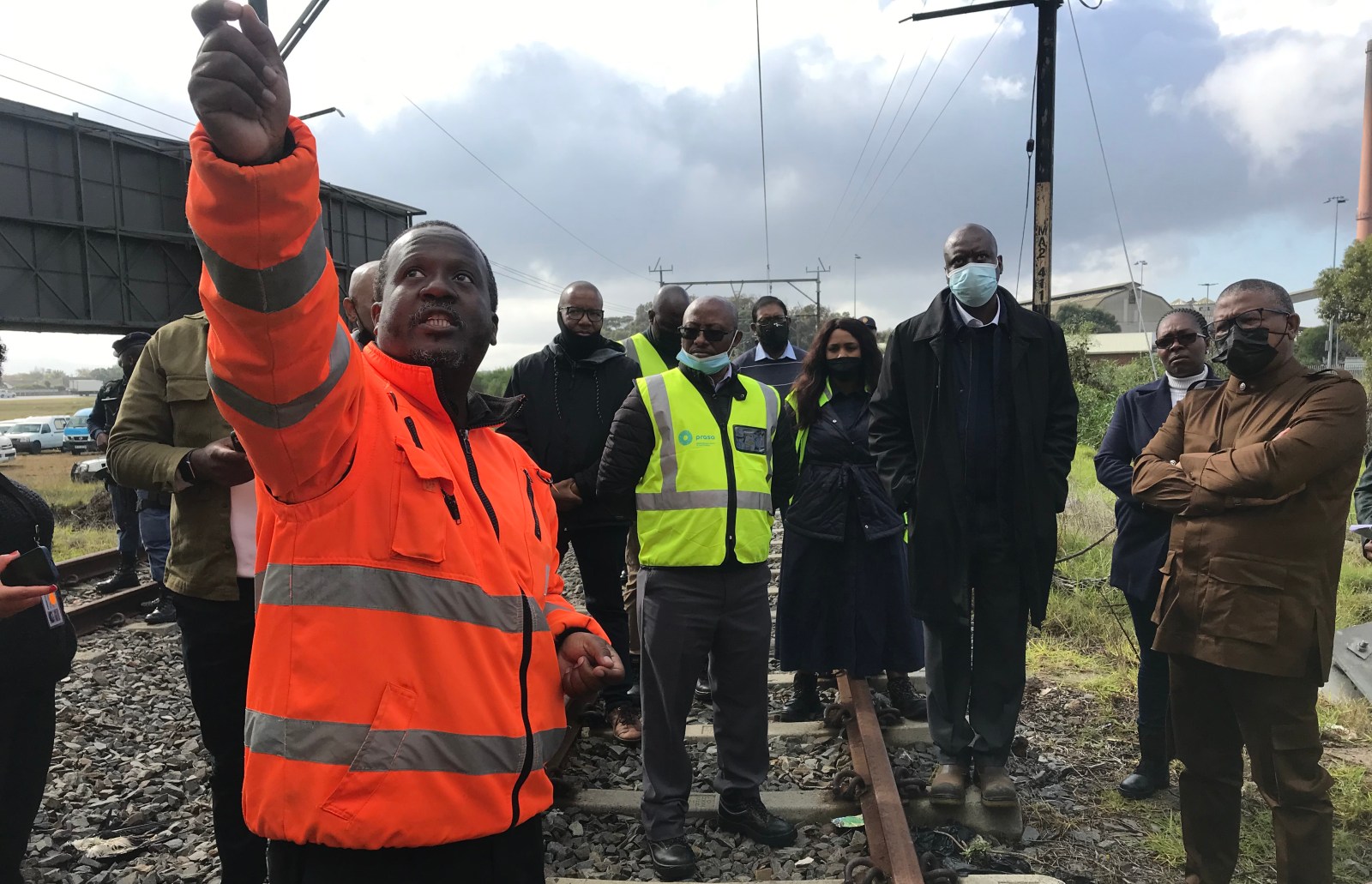 During an oversight visit on Friday, Mbalula said in July there would be a limited service from Cape Town to Langa, Pinelands and Bonteheuwel. The line that connects at Bonteheuwel to Khayelitsha, Nyanga, Philippi and Mitchells Plain would open in December, he said.

The Central Line, which is the busiest line serving the poorest communities, including Khayelitsha, Mitchells Plain, Nyanga and Bonteheuwel has been suspended, except for a brief interval, since 2018. Since then, families have set up informal settlements on the track in Langa, Philippi and Khayelitsha.

Mbalula sharply rebuked management of the Passenger Rail Agency of South Africa (Prasa) for problems with the line. “Our biggest problem here is not only people who built shacks on the railway tracks, our biggest problem here is management negligence,” he said. “What are you running here, because you are employed to run trains?” he said to Prasa acting group CEO David Mphelo, regional manager Kaparo Molefi, regional engineering manager Raymond Maseko and engineer Emily Malatji.

“There is management negligence here and as the general CEO you need to charge people here about their responsibilities. What is the head of security in the management of Prasa in Cape Town saying when you meet, what do your records of minutes say? Don’t you think that there is a problem here? What are you managing?

“We can no longer allow people to earn big salaries and all that they know is to give inadequate answers and yet they are managers. You can’t be a manager, managing a railway system and you don’t have a plan. Every day you come to work, what do you say you are doing when everything is just falling apart?”

During the visit, Mbalula was shown overhead track installations between Pinelands and Langa train stations, temporary fencing to secure the railway reserve from Langa informal settlement, work at Bonteheuwel and an informal settlement at Nonkqubela Train Station in Khayelitsha. The visit ended with a meeting at the Brown’s Farm Swimming Pool in Philippi.

Some community members expressed scepticism that the line would be re-opened in December. At Bonteheuwel the damage to the tracks was severe and clips had been stolen. Malatji said the clips would be replaced with anti-vandal clips.

Mphelo said that Parow station, on the Northern Line, would start operating in December, but no date had been set for the return of the service as far as Wellington. “Wellington is not currently in the top priority in the terms of extension. We want to recover the Central Line, we focus there at the moment. It is a resource issue.”

He said it would cost R2.1-billion to fully repair the Central Line, of which R1.9-billion had already been spent.

Mbalula said the security issues had now been resolved after a period of negligence. “Prasa security at the present moment is totally different. The fact that during the lockdown when we stopped the trains people stole even the frames of the stations shows negligence. The Prasa board decision that was taken to stop security contracts without a contingency plan has affected the security plans at Prasa. That is why we witnessed massive vandalism throughout the country.”

Speaking to the Prasa management team, he said: “When I come back I don’t want to hear that rail reserves that have been recovered are now not protected.

“You have got a clear mandate to increase security capacity,” Mbalula said. “We need to protect what we have already done and recovered.”

Mbalula blames others but what is his role?

In January 2022, Mbalula promised that the Central Line would be working by the end of July.

On 5 March 2020, the then Administrator of Prasa, Bongisizwe Mpondo, promised that the Central Line would be restored by September 2020. Mpondo also promised an 80-strong bus fleet to carry inconvenienced commuters, which never materialised.

Mbalula lays the blame for the devastating loss of infrastructure to theft at the door of the interim board, led by Khanyisile Kweyama. This decision was made by the acting CEO Nkosinathi Sishi in August 2019.

In November 2019, the Western Cape high court ruled against the decision to cancel the contracts, and ordered that Prasa must continue the security contracts until the new tender was finalised, or until alternative measures were in place. Mbalula called Judge John Hlophe a “Mickey Mouse” judge for this ruling.

The board was dissolved by the Minister in December 2019. Mbalula then appointed Mpondo as Administrator in contravention of the law.

Mpondo did not restore security. Instead, Prasa refused to abide by high court rulings to restore the security companies while a contingency plan could be worked out.

Mbalula cannot claim that he was ignorant of the issue — he was attached to an application to restore security to Prasa in March 2020 by commuter activist organisation #UniteBehind.

Mbalula became Minister of Transport three years ago, on 30 May 2019. Prasa has never been worse. DM