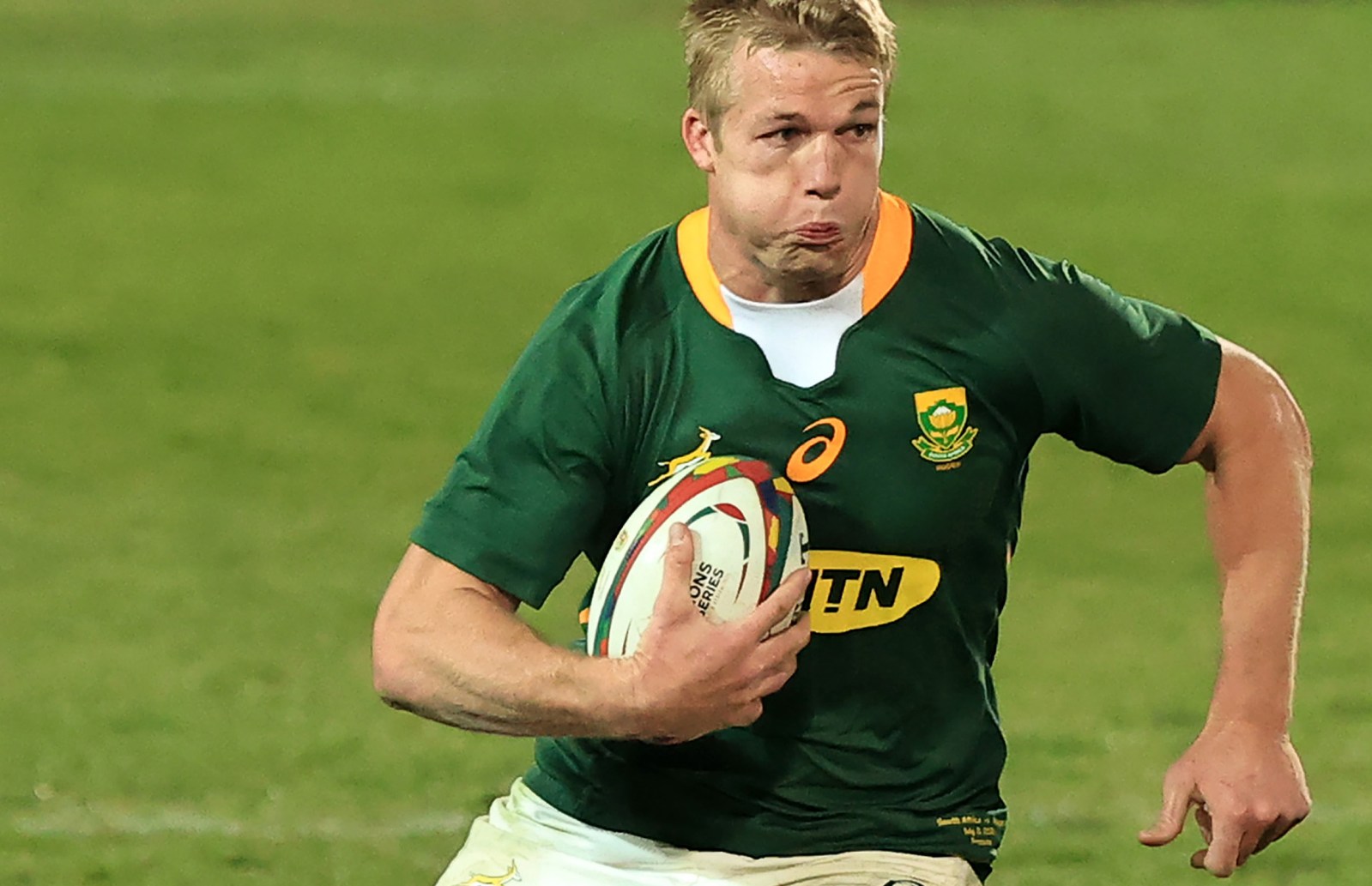 Pieter-Steph du Toit is in a positive space. During a wide-ranging interview with DM168, he speaks passionately about his family, the Springboks and his club, Toyota Verblitz.

Pieter-Steph du Toit credits a positive approach to life for his success in recent years. His indefatigable, never-say-die approach was evident over the course of an unforgettable 2019 season, as he helped the Springboks win the Rugby Championship and the World Cup, and went on to claim the prestigious World Rugby Player of the Year accolade.

Over the next two seasons, however, Du Toit’s positive mindset was put to the ultimate test. The freak leg injury he sustained in March 2020 was so severe that medical experts initially feared that the limb would have to be amputated. After making a successful comeback in 2021, Du Toit suffered a serious shoulder injury in the second Test against the British & Irish Lions, and was ruled out for the rest of the season.

While he prefers to focus on the future, Du Toit is quick to acknowledge how these past setbacks – particularly the ordeals of the past two seasons – have shaped his philosophy.

“Every time you get seriously injured, you wonder whether you can make it back and perform at the same standard, and whether you will be picked,” he told DM168. “It’s a physical challenge to regain your fitness, but a mental test too, because those doubts are always there.

“It doesn’t matter how many Tests I’ve played or what I’ve done with the Boks in the past. It doesn’t matter that I’ve been in similar situations before. If anything, that makes it a bit harder, as you know how challenging it’s going to be.

“Once you’ve recovered, you need to hit the ground running at team training if you want to be considered for selection. To put things into perspective, the Boks won’t select you if you can’t train on a Monday. So, you must be ready to go at full tilt every day, in a fiercely competitive environment.

“It was incredibly hard for me after I got injured in that match against the Lions,” he explains. “I had just come back from a long injury layoff, so to be sidelined again for a long period was the worst possible outcome. You have to be positive and think about how you can make the best of a bad situation. The upshot for me was that I got to spend more time with my family.”

Du Toit has often looked to his brothers for inspiration during the dark times. Johan (26), who represents the Stormers, is currently battling his way back from a serious injury. Anton (24) recently featured for Maties in the Varsity Cup final.

“Your own experiences shape your education. I look at Anton, who didn’t play for most of the Varsity Cup season. He put his head down and kept working, and was called back into the starting team for the playoffs.

“My other brother Johan has been going through a tough time. The screws that were inserted into his knee after an injury became infected. I’m confident that he will come through the ordeal, just as I did.

“It inspires me when I see my brothers fighting back from disappointment. The reward may be just around the corner if you keep working and pushing.

“As a professional player, you sometimes become entitled and forget that nobody owes you an opportunity. Sometimes you need to take a step back and see the game through the eyes of other people.

“I wouldn’t say that you lose your love for the game, but occasionally you forget to appreciate it and enjoy it. You see what these guys are going through and it gives you a fresh perspective.

“My brothers are trying to get to where I am [at Test level]. I’m looking at how much they love the game, how motivated they are to succeed, and how they don’t take things for granted. That’s relevant to me, with my injury setbacks.”

Lifting the tempo in Japan

Du Toit admits that it’s taken some time to regain his match fitness. He made his debut for Toyota Verblitz in January, and has been growing stronger with each passing fixture.

“It’s like starting all over again. You’ve got to focus on getting the small things right. You have to allow yourself to make some mistakes.

“The game is less structured over here in Japan, and is played at a very high tempo. I’ve come over here with the ambition to go full-out. If my body isn’t sore after a game, I haven’t done enough work.

“You do a lot of running in this league, and I’d say that my fitness has improved. In terms of the physicality, it’s not as soft as some people [in South Africa] may think.”

Du Toit is determined to make up for lost time. He hasn’t played a great deal of rugby over the past two years – and has missed 10 Tests due to injury.

“There was an alignment camp for the overseas-based Boks on Zoom recently,” he says. “It was fascinating to hear about the plans for the season, and the detail of the preparation.

“To be honest, I’m not looking much further than the series against Wales this July. I’m a bit like every other fan at the moment, I can’t wait to experience a Test match in front of a big crowd in South Africa again. I’ve been dreaming of that experience for ages. I won’t take anything for granted.”

Oh, and he has no plans to return to play in South Africa. DM168