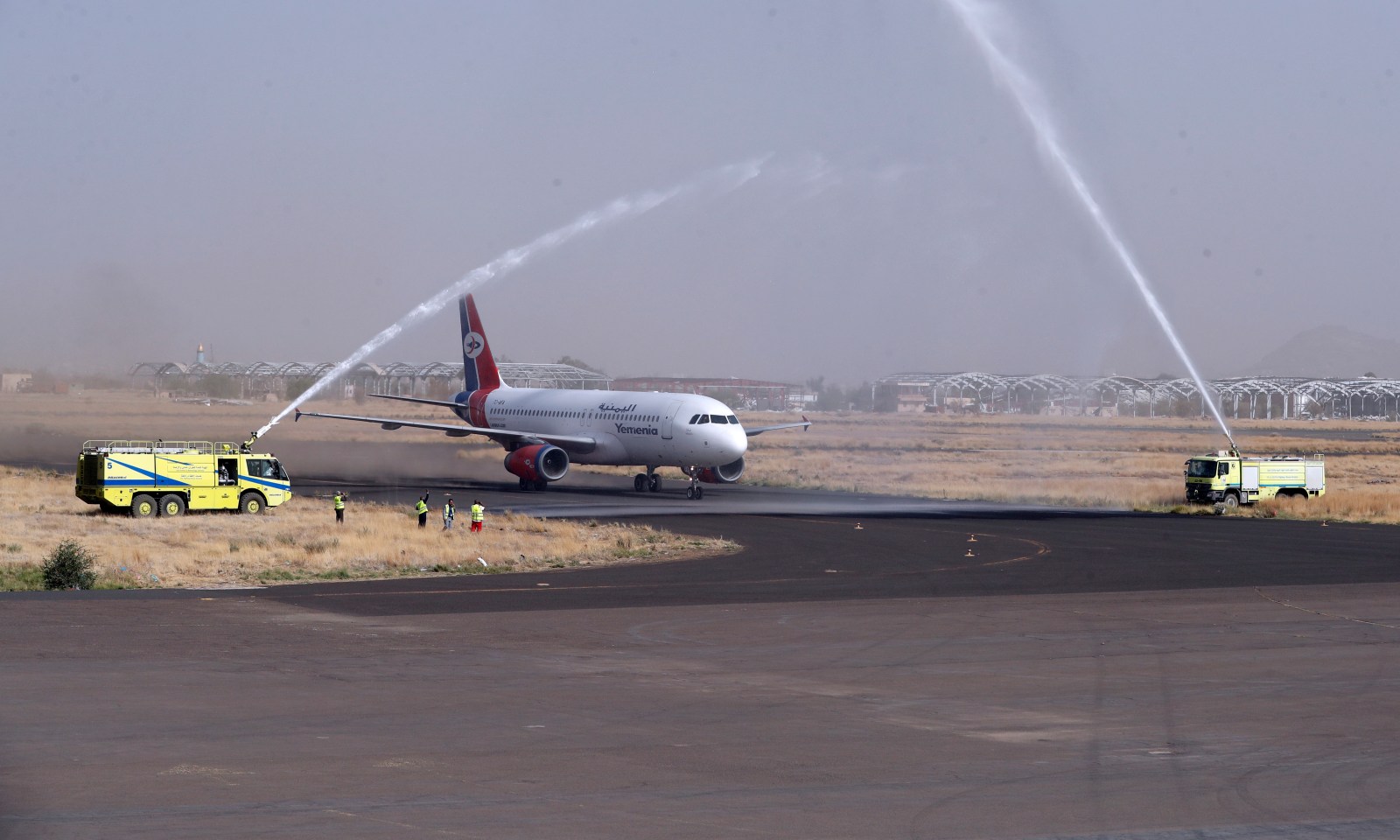 A Yemenia Airways plane lands at Sana'a airport after the airport was reopened for commercial flights, in Sana'a, Yemen, 16 May 2022. The commercial flights of Yemenia Airways into and out of the Houthis-held Sana'a airport were resumed for the first time since 2016 as part of a UN-brokered truce between the warring factions in Yemen after the Saudi-backed Yemeni government agreed to allow the travel of Houthis-issued passport holders on a temporary basis and only during the two-month truce that went into effect in early April 2022. The first commercial flight took off from Sana'a airport to Jordan's capital Amman after weeks of complications delayed the resumption as the Houthis and Yemeni government squabbled over which travel documents passengers should use. Most of the Yemeni travelers seek medical treatment and education abroad, and some families hope to reunite after more than seven years of conflict in the Arab country. The Sana'a airport had been shut down to commercial flights for the past six years by the Saudi-led coalition that imposes restrictions on Yemen's airspace, excepting for UN and relief agencies? humanitarian flights. EPA-EFE/YAHYA ARHAB

SANAA, May 16 (Reuters) - Yemen's national airline operated on Monday its first commercial flight in years from the capital Sanaa, raising hopes for renewal of a U.N.-brokered truce in the seven-year-old conflict that has pitted a Saudi-led coalition against the Iran-aligned Houthis and put Middle East security in peril.

Water canons sprayed Sanaa airport’s runway as an airplane of the national carrier Yemenia landed against a backdrop of destroyed buildings surrounding the airfield.

Dozens of Yemenis, including patients who waited years for medical treatment, went through security checks in the airport’s terminal which has been deserted since 2015, when the coalition intervened in Yemen’s civil war after the Houthis ousted the internationally recognised government in the previous year. The coalition controls Yemen’s airspace and seas.

“We have waited for this trip for three years. Because of my father’s health condition, we couldn’t take him by land to Aden. Praise be God, the relief has come,” said Ismail al-Wazzan before boarding the flight with his father sitting on a wheelchair.

The flight was bound for Amman in Jordan.

The two-month truce came into effect on April 2 and has largely held but resumption of select flights agreed under the deal stalled after the Saudi-backed government had insisted all passengers from Sanaa need government-issued passports. Facing pressure from the international community, it agreed last week to allow Houthi-issued passport holders to travel outside Yemen.

The United Nations is seeking the extension of the nationwide truce, the first inclusive ceasefire in the war since 2016, to clear the way for broader political negotiations to end the conflict that has killed tens of thousands and caused a humanitarian crisis.

The truce deal included a halt to offensive military operations, allowing fuel imports into Houthi-controlled ports, and some flights from Sanaa. The flights will facilitate separate talks on reopening of roads in the heavily disputed Taiz region.

“The take-off of the first commercial flight from Sanaa airport in almost six years is a stepping stone towards a lasting peace for Yemen,” Erin Hutchinson, the Norwegian Refugee Council’s Country Director in Yemen, said in a statement.

In Sanaa’s main hospital, others had to wait for the next flight expected on Wednesday.

Mohamad al-Hababi’s son could not make a booking despite his critical condition.

“This is my son Ahmad. On April 10, we took him to a hospital in Dhamar (north), then to the German hospital in Sanaa, he has been in a coma for more than a month,” Hababi said.