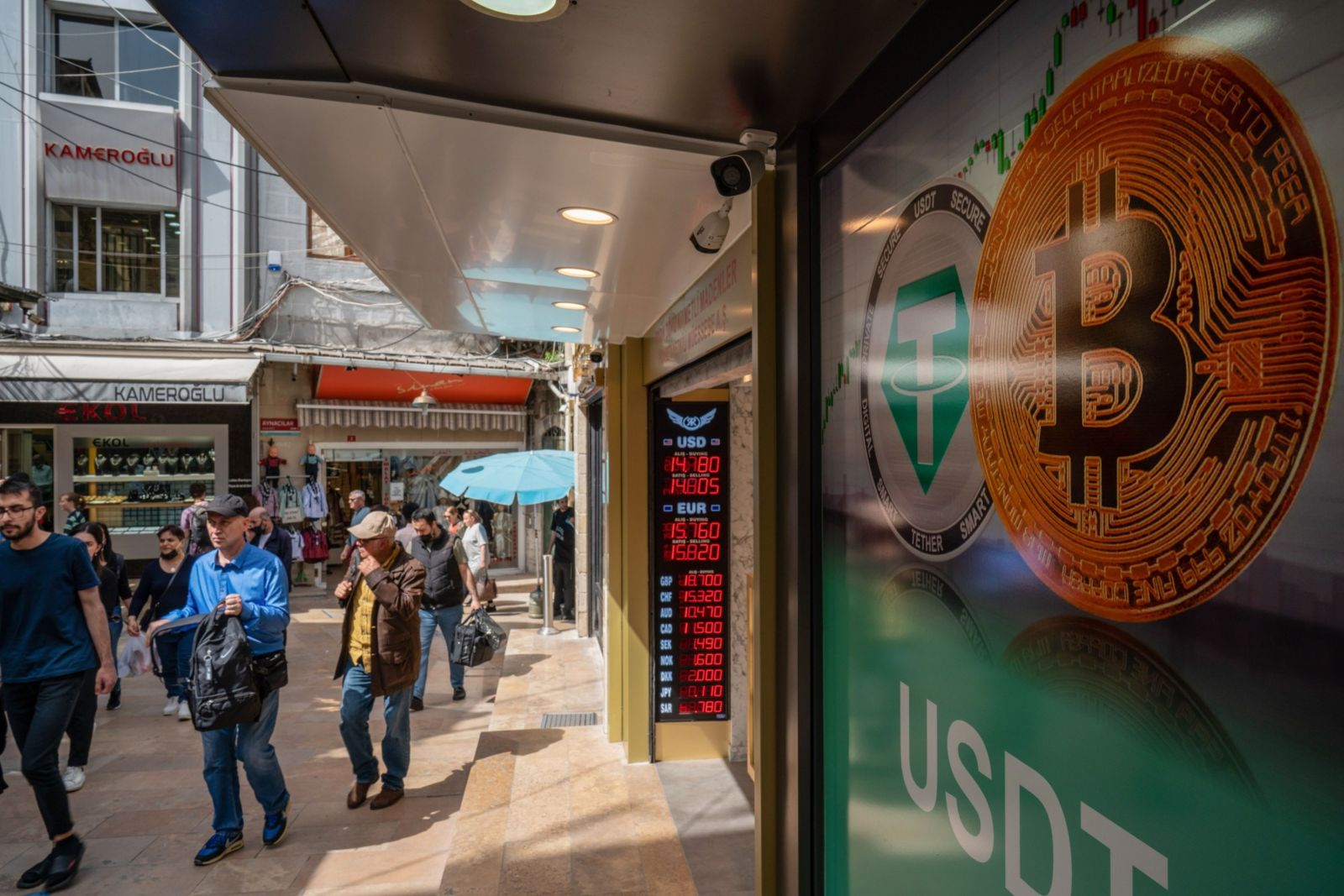 A Tether, left, and Bitcoin logo in the window of a cryptocurrency exchange kiosk in Istanbul, Turkey, on Tuesday, April 26, 2022. Both tech stocks and Bitcoin have notched big swings this year as the Federal Reserve becomes less accommodative as part of its fight to combat inflation.

Wednesday's implosion of the TerraUSD stablecoin kindled widespread panic in the crypto space. But 24 hours later, things have calmed down significantly.

Terraform Labs halted, restarted and then halted again its Terra blockchain in the wake of the collapse of TerraUSD and its related Luna token. Developers who work on the blockchain said in a tweet posted to their verified Twitter account that the second halt was intended to enable them to “come up with a plan to reconstitute” the network. Both TerraUSD (UST), the algorithmic stablecoin that lost and never regained its 1-1 peg to the US dollar, and the associated Luna token were trading near zero at the time of the second halt.

But elsewhere in crypto sentiment had started to rebound. Tether, the largest stablecoin used in cryptocurrency markets to facilitate trading, recovered from an earlier mini-crash, soothing concerns that its troubles might spill into the broader market.

Bitcoin, meanwhile, traded above $30,000 after falling to about $25,000 in the previous day’s trading. And some alternative coins also gained, with Bitcoin Cash adding 20% at one point before paring gains.

It’s a remarkably more positive picture from the havoc that overtook crypto markets on Wednesday as UST entered a “death spiral”. That day, Bitcoin had suffered a nearly 10% drop.

“The fact that Tether is stabilising means that the margin calls that took place are fading,” said Matt Maley, chief market strategist at Miller Tabak + Co. “Whenever you get forced selling in anything, it overshoots. People are still nervous, but the selling has abated. Investors will be nervous for a few more days, but the supply-demand equation has stabilized again.”

Market-watchers noted that Bitcoin, which typically trades in tandem with the stock market, was able to gain on Thursday even as the S&P 500 and Nasdaq 100 sunk 0.1% and 0.2%, respectively.

Treasury Secretary Janet Yellen, meanwhile, said Terra’s tumble showed the dangers of tokens that purport to be pegged to the US dollar, though she added that its implosion didn’t pose a threat to financial stability.

“Crypto has little economic significance. Not that many people own much of it,” said Brian Nick, chief investment strategist at Nuveen. Still, he added that the crypto market is being swayed by the same forces that are affecting equities right now.

“What gets punished when financial conditions are tightening? Anything with a high valuation and an uncertain or non-existent revenue stream,” he said by phone. “And crypto has inarguably high valuations and no revenue stream. That’s very much of a piece with what we’re seeing in growth stocks, tech. It’s correlated but obviously it’s more volatile because the market is less liquid.”

“Last night there was a huge arb,” he said, adding that “everything at Tether and Bitfinex appears to be working as usual.”

“There’s no indication there’s anything going wrong there at all besides the market move, which is now looking like it was circumstantial,” he said.

Still, cryptocurrencies remain mired in a deep downturn. “The question, as always, is: now what?,” wrote Michael Purves, chief executive and founder of Tallbacken Capital Advisors. He expects further downside for Bitcoin and is looking at the coin potentially hitting $20,000 or $15,000.

“A move to 15K would be a move off the January levels which would be quite consistent with the last three long term momentum reversals we have seen,” he said in a note. “However, bears should be prepared for aggressive relief rallies along the way (just as they should with equities).” BM