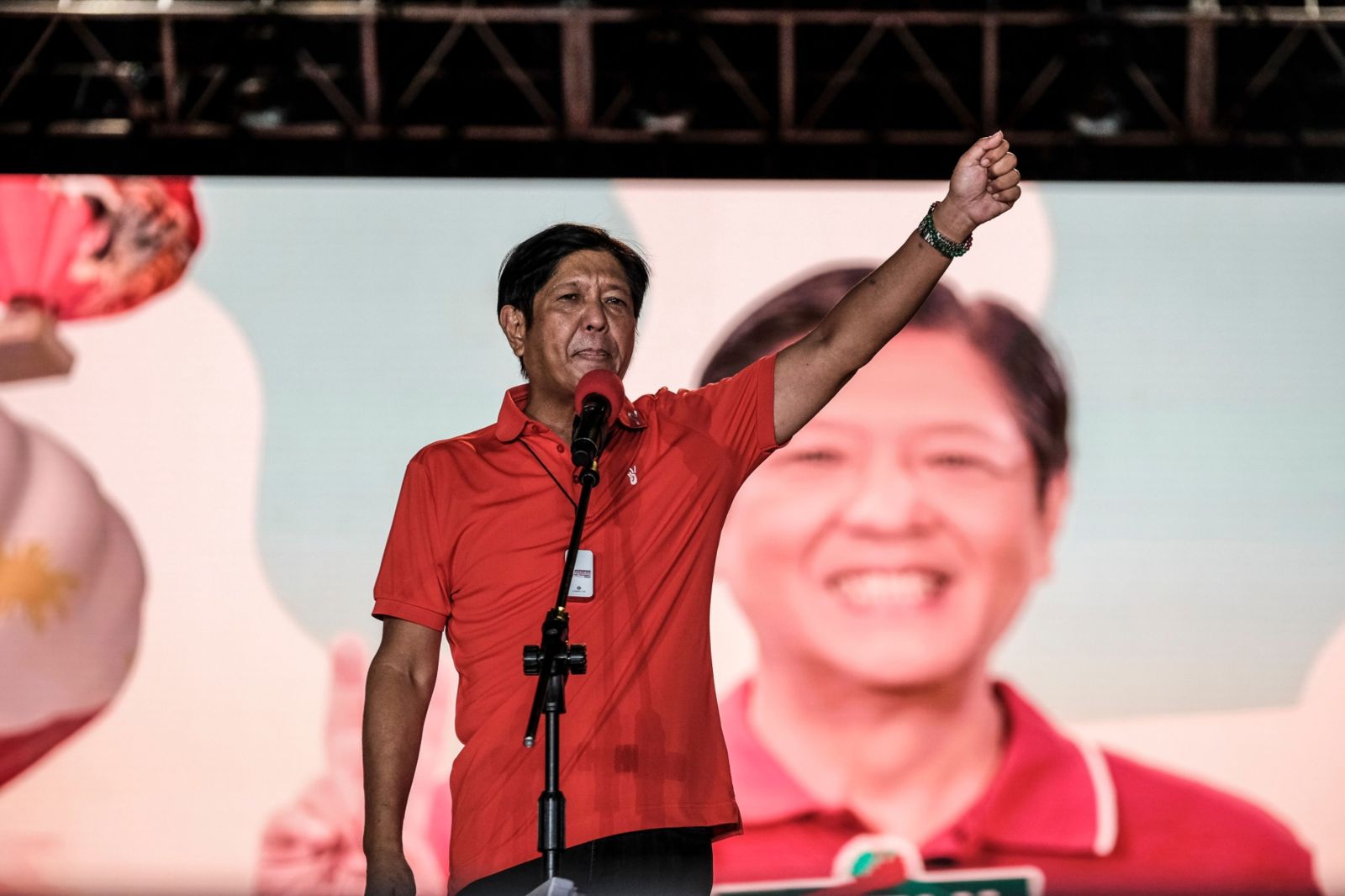 Ferdinand Marcos Jr won a landslide victory in the Philippines presidential election, according to unofficial results, bringing his family back to power in Manila 36 years after his dictator father fled the country.

With 96.7% of the election returns counted, the former senator won 30.7 million votes, or 58.8% of the total votes cast for president. His closest rival, Vice President Leni Robredo, got 14.6 million votes, or 28%. Despite the wide margins, Marcos Jr. avoided claiming victory on Monday night even as his supporters celebrated early Tuesday in front of his campaign headquarters.“A lot of people are saying the fight is over, but it’s not,” Marcos Jr., known as Bongbong, said in a televised speech. “Let’s wait until the 100% of votes have been counted and the victory is very clear before we celebrate.”

So far, Marcos Jr. got the highest share of the vote since his father won the presidential elections in 1981, which the opposition boycotted at the time.

Robredo also didn’t concede, though she prepared her supporters for defeat in a speech in the early morning hours of Tuesday.“The voice of the people is becoming clearer and clearer,” she said. “In the name of the Philippines that I know you also love, we need to listen to this voice because in the end we only we have one country that we share.”

While both major candidates pledged to revive the economy and boost employment, Marcos Jr., 64, drew on the support of voters comfortable with the strong-man rule of outgoing President Rodrigo Duterte. His daughter, Davao City Mayor Sara Duterte, joined up as Marcos Jr.’s running mate and was leading her closest rival by an even bigger margin.

Marcos Jr.’s victory would bring a measure of continuity to the Southeast Asian nation of 110 million people, along with big questions about how he’ll rule. Although he has pledged to carry on with Duterte’s policies, it’s uncertain how he’ll handle a decades-long investigation into his family’s wealth, U.S.-China ties and economic policy.

A Bloomberg survey in March found that Philippine investors were lukewarm toward a Marcos Jr. presidency and preferred Robredo, who had a similar economic strategy but emphasized good governance. In the final weeks of the campaign, Robredo drew hundreds of thousands of supporters to hear her speak, suggesting she had some momentum heading into election day.

But polls consistently showed Marcos Jr. with a double-digit lead, thanks in part to alliances with most governors and influential local clans around the country. He also built a social-media presence that presented a rosy picture of his father’s dictatorship to the youth, who make up a third of the eligible voters and were not born when the elder Marcos was in power.

“Marcos Jr. appears to want to turn back the clock to his father’s era,” said Michael Kugelman, senior associate for South and Southeast Asia at the Washington-based Wilson Center. “It’s unclear how that would ease the country’s immediate economic strain.”

The Philippines stock index tumbled 3.1% Tuesday before clawing back some losses as traders weighed the result amid a global selloff in equities. Investors are watching who Marcos Jr. appoints to key positions, said Ruben Carlo Asuncion, chief economist in Union Bank of the Philippines.

“These people should be highly skilled, independent thinkers, and largely respected by their peers,” he said. “If this happens, I think the huge mandate will be put to very good use.”

Marcos Jr. is poised to inherit an economy forecast to grow at one of the fastest rates in Southeast Asia this year, after the pandemic reduced household incomes as tourists stayed away and remittances from foreign labor dried up. Inflation is also surging at one of the fastest paces in Asia as food and fuel prices soar in the wake of Russia’s invasion of Ukraine.

In one of the few interviews he gave before the election, Marcos Jr. told CNN Philippines that several people were “auditioning” to become part of his economic team. “You just have to trust your instincts,” he said. “It’s necessary to have some working experience with that person.”

“Extra spending on infrastructure would be welcome and could provide an important boost to the country’s prospects,” he wrote in a note on Monday. “In contrast, the potential economic benefits from closer ties with China are likely to be quite small, especially given the risk that a pivot towards Beijing could jeopardise the country’s more important economic relationship with the U.S.”

Marcos Jr., set to be sworn in on June 30 for a six-year term, faces disqualification cases citing his conviction nearly 30 years ago for failing to file tax returns that could eventually reach the top court after the elections. The Commission of Elections will hear four petitions a day after Monday’s elections, and Marcos Jr.’s camp is confident these cases will be dismissed.

Entering politics in the 1980s during his father’s rule, Marcos Jr. became vice-governor of his home province north of Manila at the age of 23. He later on became the governor, and won a seat in Congress a year after their family returned from exile in the U.S. in 1991. BM