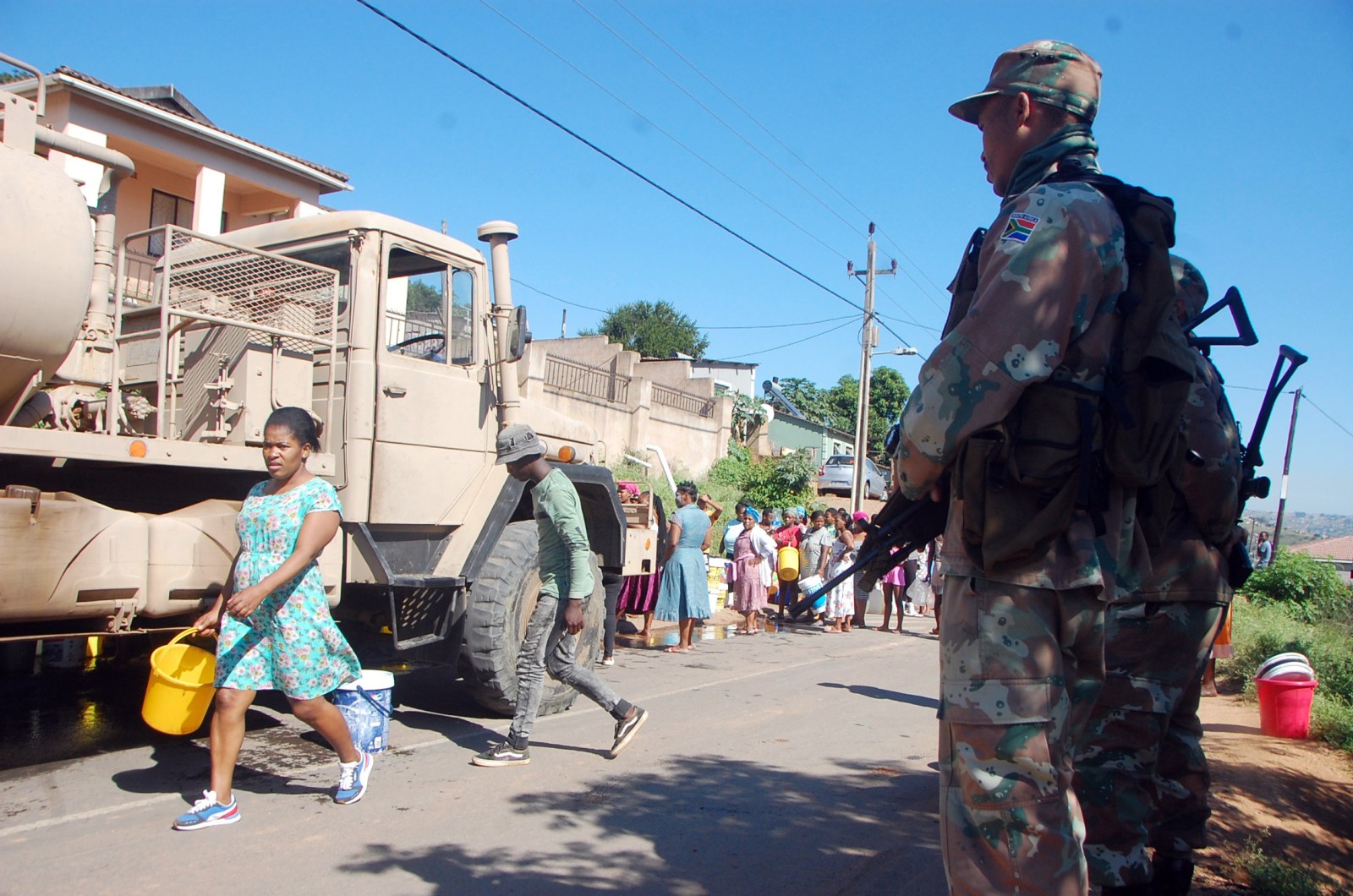 Residents of Sunshine near Mariannhill, west of Durban, rush for water from tankers brought in by the SANDF on 4 May 2022. (Photo: Phumlani Thabethe)

The South African National Defence Force is on the ground in KwaZulu-Natal to help in the recovery operations after floodwaters destroyed roads and bridges, leaving many people isolated.

During the recent floods some communities around KwaZulu-Natal were trapped on islands as bridges, linking roads and freeways were torn down by raging waters one after the other.

When the Intake Bridge over the Umlazi River succumbed to the floods more than three weeks ago, it did not go down alone. It swept away the Olympic Bus carrying workers and residents. Some of the passengers managed to break windows and swim to safety. But a few of them, including old women and young children and the 67-year-old driver, Zonda Thusi, were trapped inside. They are still missing.

The collapse of the bridge isolated residents of Intake, Nkoselweni, Tafelkop and Zwelibomvu from the rest of the world. They could not travel out of their area to get to work, schools, hospitals, malls or anywhere else.

So it was a welcome relief – for those trapped people – when the South African National Defence Force (SANDF) set up camp near the Intake Bridge and began rebuilding the bridge, searching for missing flood victims and getting food, water and other essentials to the isolated residents.

The operation is part of the deployment of 10,000 SANDF troops to help communities affected by the recent floods. It includes the military providing more than 31 water tankers to bring in water.

The Intake Bridge was so damaged that it will take time to be fully repaired, but SANDF engineers and other technical staff are hard at work. So far, they have managed to build a corridor so that people and goods can get from one side to the other.

SANDF and Department of Defence spokesperson Major Mpho Mathebula said that since the floods struck they have been working with the eThekwini Municipality and others to assess the extent of the damage and “see how we can help communities”.

“We are assisting with fixing small roads and bridges. On top of that, we are providing water tankers, about 60,000 to 80,000 litres of water per day. There are more than 20 locations we are servicing. We are also doing mop-up operations in other areas. In other words, we are clearing up rubble,” she said.

Mathebula said they had noted that some local contractors and local young people staged a protest, saying they are not happy because the SANDF is doing the work instead of allowing contractors to do the work and thus create jobs. She said these protests are “premature” because the SANDF is building temporary structures and helping municipalities to get back on their feet so that they can resume their work.

“In Tongaat, we are setting up water-purification plants in places like Inanda and Hazelmere Dam. The aim is to build capacity to provide 6,000 litres of bottled water per day. We are also assisting SAPS with search-and-rescue and body-recovery missions. We are also doing humanitarian missions in areas that cannot be accessed by road by flying in food, water, blankets and mattresses so that people are able to access these services in 20 communities,” Mathebula said.

Like many other parts of eThekwini affected by the floods, impromptu protests for water and sanitation have been a daily occurrence in Mariannhill since the floods.

On 4 May, pandemonium broke out when two SANDF tankers, guarded by a highly armed squadron, arrived in Mariannhill’s Sunshine area. People ran to the tankers, carrying water containers. Young children, young and old women and men formed long queues for water from the tanks’ taps.

One of the queuing residents was 40-year-old Lindiwe Mchunu, who said they had not had water since the floods more than three weeks ago.

She said when regular tankers came by, residents had fought over them and some residents were left without water.

“At least now we will all have a fair chance of getting water because there will be no fighting.

“They [the greedy ones] are scared of the soldiers,” she said, adding that she was one of many who had to go home empty-handed after local bullies hogged all the water from regular water tankers.

“We had to pay a neighbour with a van R40 each so that he could go and get us water. Imagine having to do that almost every day.

She said that apart from sanitation problems, having no water meant that children could not go to school, workers had to go to work without bathing and there was no water to drink or to wash clothes.

The impact of the floods is still being felt very strongly in the western part of the eThekwini Municipality.

On the morning of 4 May, we visited the Dassenhoek Community Hall in Mariannhill. According to a coordinator at the hall, more than 100 residents initially sought refuge at the hall. Some had gone back to rebuild their homes and others had moved in with relatives. At least 11 families, including young children, are still living here after their homes were destroyed during the disastrous floods.

Desperation was written all over their faces. Their children go to school during the day and return to the hall in the afternoon.

Bonisiwe Mkhize, a 36-year-old Sunshine resident, is one of them. She said she and her five children had a lucky escape from her two-roomed home, on a hillside, when it was washed away.

“We were helped by my 16-year-old son and a neighbour, otherwise we would not have made it,” she said, adding that she watched in disbelief as their home and all their belongings washed away and disappeared.

“We are pleading with the government to speed up the documentation system. We don’t have any documents whatsoever. I can’t even collect the grant or reapply because I lost my identity documents.

“My life is a mess… I’m hopeless… the only thing that pushes me to live is my kids,” she said.

Read in Daily Maverick: “The KZN flood disaster was amplified by a toxic stew of vulgar governance”

In nearby KwaCutshwayo, near the township of KwaNdengezi, the Hlophe family is still in dire straits.

The family lost six children and two elderly women when the floods washed away their home. None of their bodies has yet been found – they are believed to be stuck somewhere downstream.

Sne Hlophe told journalists this week that the nightmare still haunts her at night.

“I cannot even sleep. What is worse is that we cannot get closure as a family until the bodies have been found. We know that weeks have passed, but we are yearning to get bodies, or even the bones,” she said.

She added that the family still lives in the only rooms that have not been destroyed because “we have nowhere else to go”.

There are many families like hers in the region. DM168