Day Six — the long journey to a new home 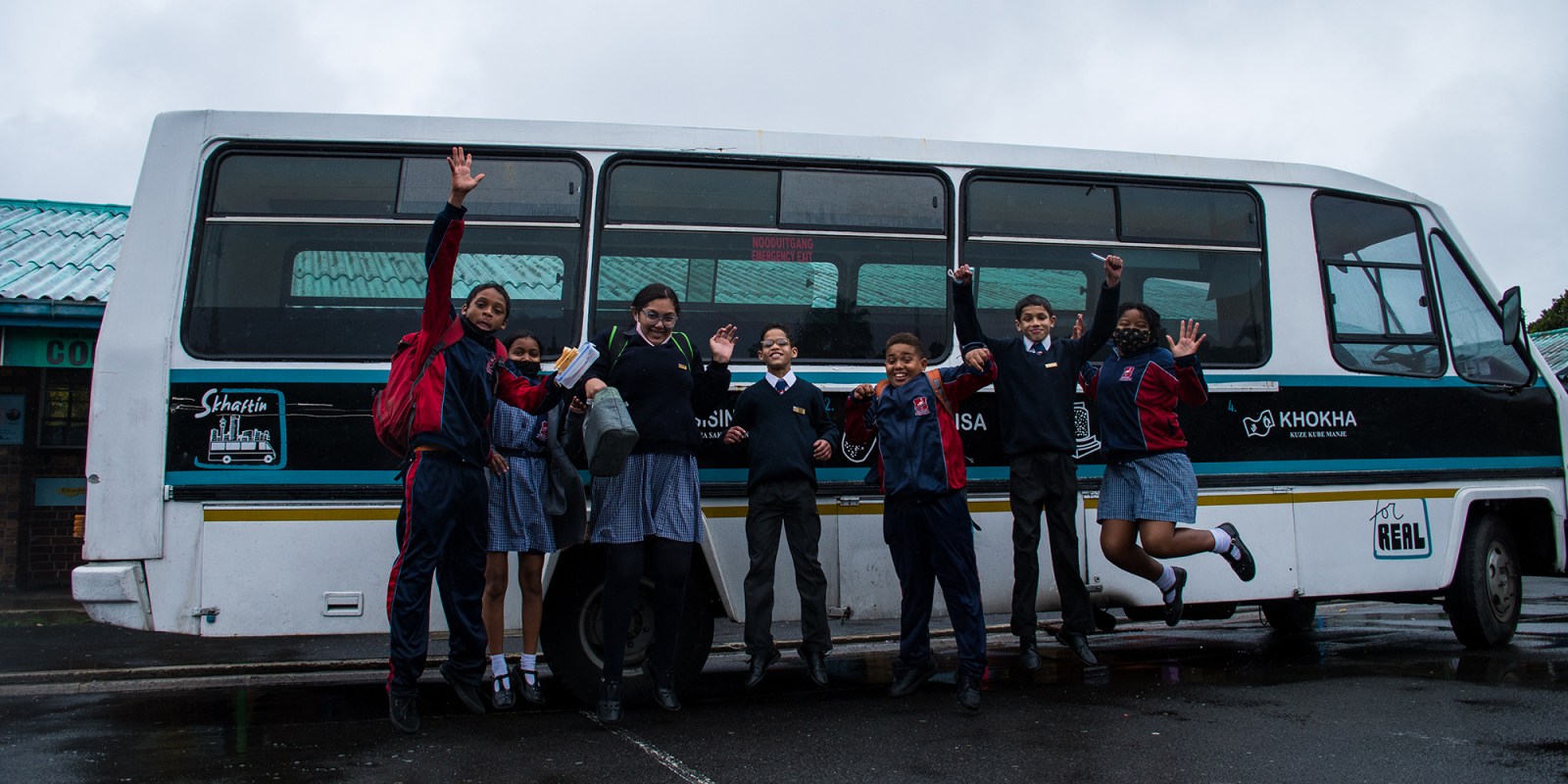 Learners from Kannemeyer Primary School celebrate the arrival of the Skhaftin bus to their school. (Photo: Julia Evans)

The Skhaftin Bus — a mobile, plastic-free grocery store — reached its final destination of a six-day road trip through South Africa, arriving at Kannemeyer Primary School in Grassy Park, Cape Town to lines of children elated with the potential the bus could bring.

‘It worked,” said Ilka Stein as she turned into the street of Kannemeyer Primary School with shaky hands.

After nearly two years of developing and bringing to life the concept of a mobile, plastic-free grocery store that not only promotes the idea of sustainability, but provides the communities with low-cost food alternatives — her bus had found its new home.

The streets were slick with water and rain was pouring from the sky, but still, every student at the school was waiting in their courtyard cheering, jumping and smiling as bus driver Bruce Mkhwanazi gave his final swing of the no-power steering wheel into the premises.

The bus (which is more than 40-odd years old, has no power steering and windscreen wipers that stopped working in thick Knysna mist) travelled more than 1,800km through five provinces over six days.

Read day one, two, three, four and five of the road trip diaries, where the Skhaftin team shared the idea of low-cost sustainable shopping to communities throughout South Africa.

Stein needed to find a new home for her passion project and decided to donate the bus to Kannemeyer Primary School in Grassy Park, Western Cape because she believed they would do her vision for the project justice.

Principal of Kannemeyer Primary School, Ridwan Samodien, said on the day of the bus’s arrival, “as a school, it is our task to continue to try and aspire to the sustainable goals”.

They plan to use the bus to educate the learners and community about minimising packaging, the three Rs (reduce, reuse, recycle), and sustainable food alternatives.

“And at the same time, we are going to buy into the notion of if we can use this as an opportunity for the school to generate some income, by making it available to the community to come and purchase food — with the skhaftin concept — of bringing their own lunch boxes or whatever they have,” said Samodien.

He said the low-cost model would be beneficial for the community as well and present many educational opportunities for the learners.

When asked why the learners were so excited, Samodien said that in part perhaps it was because the school didn’t have its own bus, but also, “I think just the fact that they’re getting this amazing gift, I mean of all the schools in this entire country, you decide to bring it to Cape Town… it makes us feel very, very special and honoured and humbled.”

Samodien added, “although she [Ilka Stein] says there’s no strings attached, the gift in itself says to us that we need to treat it with respect, that we need to take care of it. And we need to do our little bit in saving Mother Earth”

“We want to do justice to her vision and her intention of why she initiated this idea.”

Head boy of Kannemeyer Primary school, Carlos Strauss, said, “We all can’t wait to put the bus to good use”.

Head girl Imaan Omar and deputy head girl Megan Ntsibande said the joy and excitement were because of the potential the bus provided for their school.

The learners said they were aware of climate change and pollution and felt that their community understood what the climate crisis was, but not how dire and urgent the situation was.

“The earth will become more healthy if people become a bit more aware of the situation,” said Omar.

Stein said, “I was obviously in tears, but it was in really positive tears in the sense of we made it — it is possible, this crazy idea of a road trip with his old bus; we made it safely.”

Stein said that how the learners were waiting for the bus, how the assembly hall was decorated with drawings of buses and the effort that went into their arrival made her think this was exactly the right place the bus needed to be.

“The bus ran out of petrol the moment we were on the school grounds,” recalled Stein, “so we kept on laughing and saying even our bus knew, ‘okay, I’m done. I’m home.’ ” DM/OBP

Day Six — the long journey to a new home