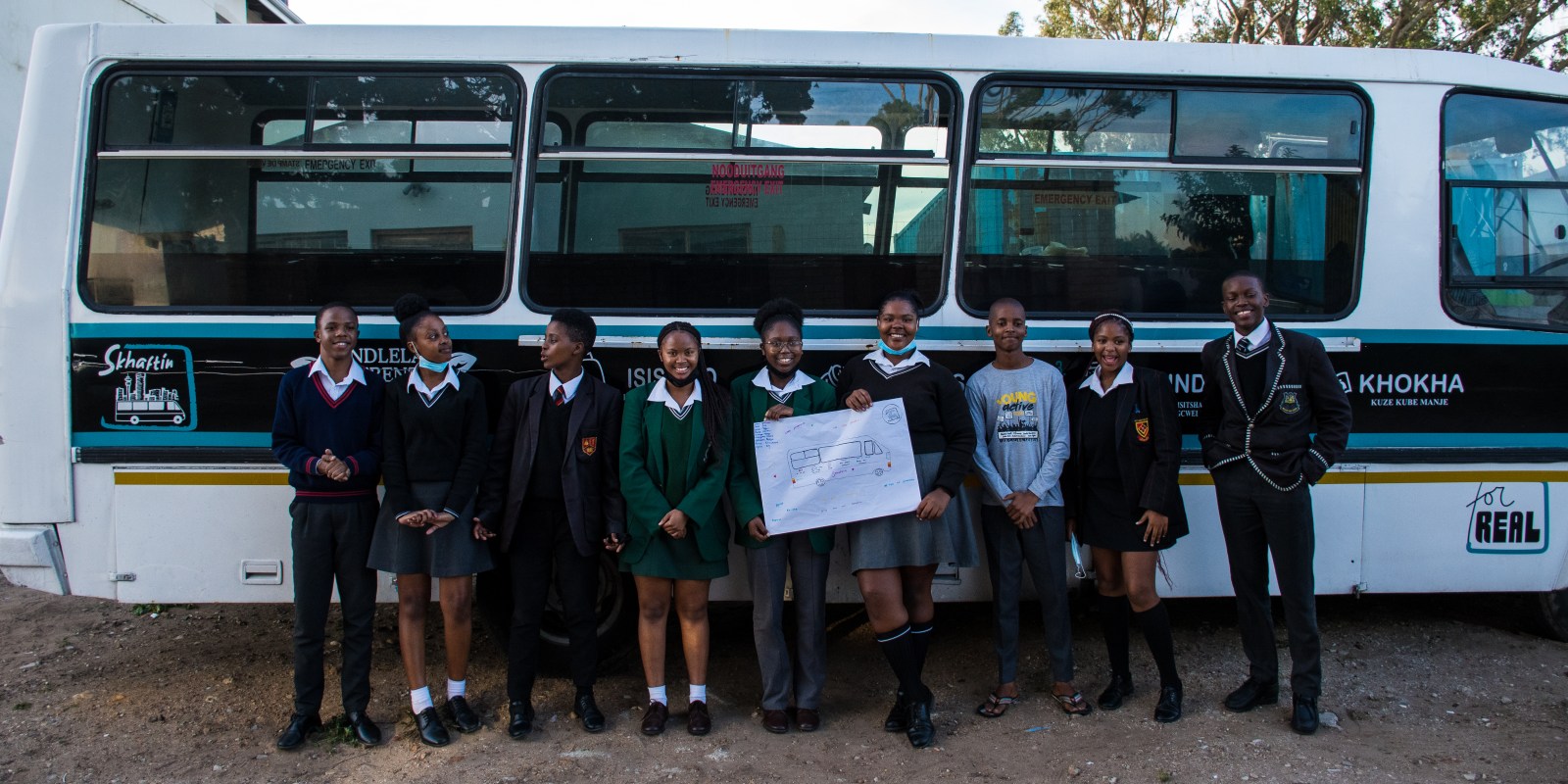 Grade 11 learners part of Masifunde Learner Development in Walmer township, Gqeberha, with a poster they made about the plastic-free grocery store concept. (Photo: Julia Evans)

The Skhaftin Bus is a mobile grocery store that aims to provide low-cost food and promote plastic-free shopping. On the third day of its trip through SA, the bus stopped at Masifunde Learner Development in Gqeberha, Eastern Cape.

As part of its trip from Johannesburg to Cape Town, which aims to spread awareness of the concept of sustainable shopping with grassroots communities along the way, the Skhaftin bus stopped at Masifunde Learner Development in Walmer Township, Gqeberha, which provides educational support to more than 450 learners in the township.

Masifunde’s founder, Jonas Schumacher, told Our Burning Planet that, in large part thanks to their five full-time social workers, the academic support and social assistance they provide they have seen 100% of their learners passing matric in the last few years, while none of their learners has dropped out of school, and this year – for the first time – all their learners made it to tertiary education.

Schumacher said Masifunde incorporates climate change into its syllabus because they have already seen its impact, especially in their area of Nelson Mandela Bay.

“Our dams are empty. Our communities and our rivers are polluted. We very often don’t have drinkable tap water. So we feel it,” said Schumacher.

He pointed out that the learners have more immediate and pressing social issues that they confront on a daily basis – like crime, domestic violence, poverty, alcohol and drug abuse and peer pressure.

Grade 11 learners who’ve been part of the Masifunde programme said the biggest social issue they face is violence – with every one of them saying they had witnessed shootings and dead bodies in their community.

So, why do they care about the climate crisis and plastic pollution in the midst of such dire and violent living conditions?

Unathi Speelman, a Grade 11 learner who has been part of the development programme for several years, says, “It should be everybody’s responsibility to keep the planet clean,” adding that if people could individually manage how they dispose of their trash, the world would be much cleaner.

“At times, it just feels like too much,” said Palesa Ramakoena, a Grade 11 learner who’s been with Masifunde for three years.

“All these issues that have been happening in the past few years they put on to this generation.”

Along with having to deal with many social issues, low-income communities have contributed the least to greenhouse gas emissions, and often don’t have the resources, means or services to dispose of their waste properly.

Dike said: “This generation is carrying a lot from the past and I feel like we have to actually take care of things that are gonna affect our future and our children’s future – that’s why we care.”

When asked how they don’t get disheartened in the face of all these issues and generational pressure, the learners shrugged and said: “We just have to deal with it.”

A common narrative among climate activists who work with communities in South Africa is that climate justice and social justice are intertwined.

The Skhaftin bus – a mobile, plastic-free grocery store – is more affordable than a regular store as customers can choose and pay for specific and smaller amounts of ingredients and don’t pay for packaging.

Schumacher spoke to community members in Walmer township about the concept after the bus visited, and they said a store like that would be great in their town, especially at month-end when people are low on funds.

“It was not that plastic-free component that would convince them but the aspect of [that] if I have only very little money, I could still just get that cup of rice and maybe samp or maize meal that I need to make supper.”

The Grade 11 learners agreed, saying many people in their area struggle to buy food due to unemployment – which was already rife and got worse during the Covid-19 pandemic  – and a low-cost store model would work well.

“I think it was amazing because it can change how we use plastic,” said Sihlangule Hlasela, a Grade 11 learner who has been part of the development programme for six years.

Dike said: “I can hardly imagine a world without plastic because it’s what we grew up seeing.”

The Skhaftin bus heads next to Knysna in the Western Cape. Stay tuned.