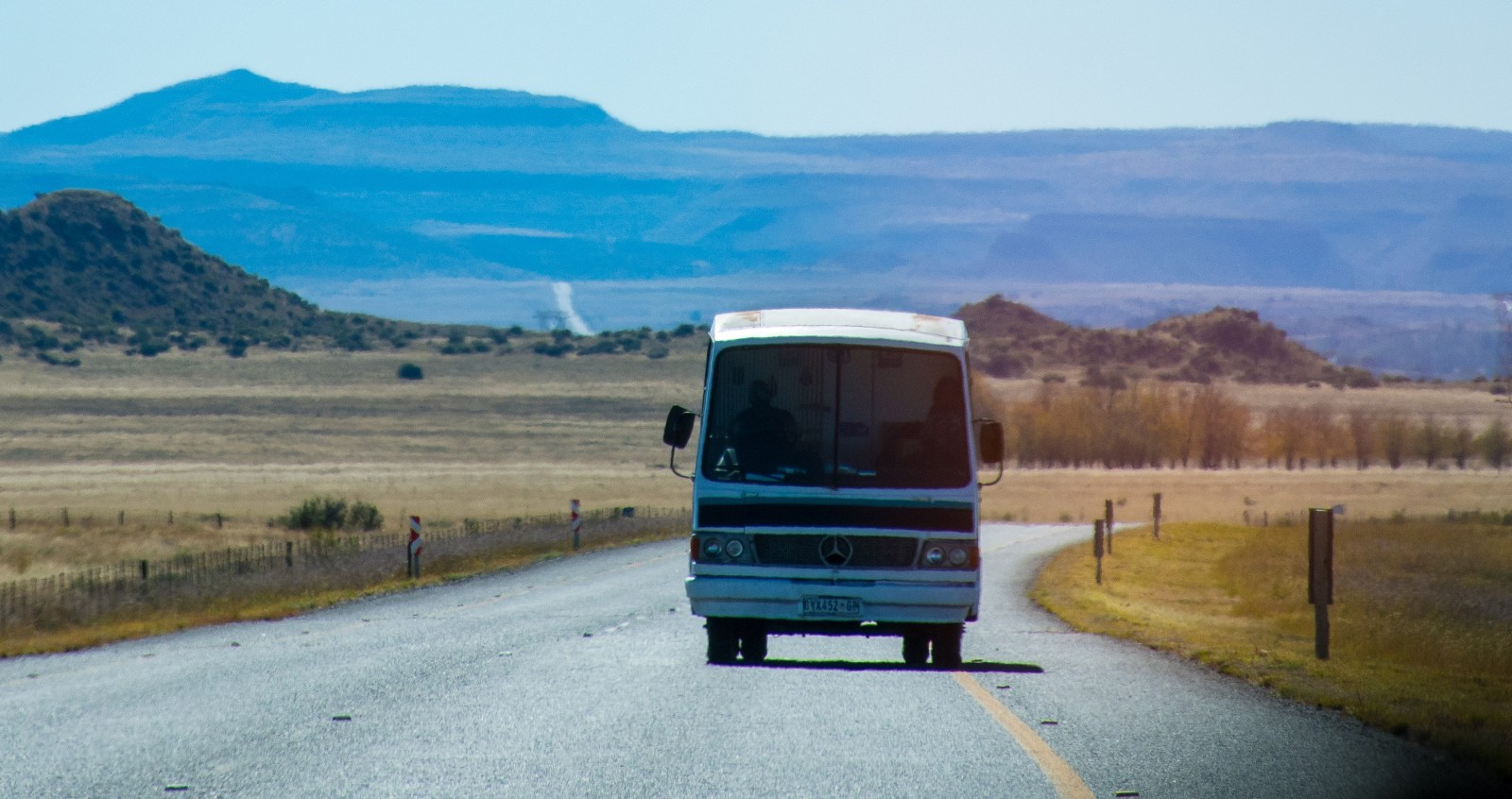 The Skhaftin bus on the N9, Nothern Province, en route from Bloemfontein to Graaff-Reinet on day two of the trip, 2 May, 2022. (Photo: Julia Evans)

An informal settlement in Graaff-Reinet has been coming up with ways to provide affordable means to feed their community since lockdown in 2020, and now the low-cost, plastic-free grocery store might be their next sustainable alternative.

“They get it!” Shouted Ilka Stein pointing at the line of children and community members holding their lunchboxes or skhaftins as they queued up to receive samp and beans — or umngqusho in isiXhosa — alongside their community vegetable garden.

After five hours of rolling through the karoo bends with no power steering, the Skhaftin bus — a mobile, plastic-free grocery store — arrived at Vrygronde informal settlement in Graaff-Reinet, Eastern Cape. The bus is currently on day two of its trip through SA — from Johannesburg to Cape Town — aiming to spread awareness of the concept of sustainable shopping with grassroots communities along the way.

Following the devastation of the droughts in their area in 2019 and the Covid-19 lockdown in 2020, the Vrygronde community decided to take their fate into their own hands and start a soup kitchen to help with the food crisis, which they supplement with subsistence farming.

“We believe that we can make a great change in our community,” said Rochida Elias, smiling broadly as she stood in front of her own backyard garden that she started in 2019 after noticing that watermelons started growing in her soil after she threw seeds there.

The community garden began in 2020 to help feed their community, where they grow spinach, green peppers, onions, pumpkin and herbal medication for their community.

“It’s to do with a mind shift,” said Nettly Ahmed, a community member who is part of the local NGO Support Centre for Land Change (SCLC), a land and environmental justice organisation that is developing an agro-ecological hub for Vrygronde in the hope it provides a sustainable and ecological alternatives for the settlement that is mostly ignored by their municipality.

“We are too much into, ‘why should I do that if I can go and buy that?’

“So it was an opportunity to let people know that if we don’t plant our own food we’re going to starve,” said Ahmed referring to the drought and lockdown that led to the majority of their community without a source of income.

The community feeding scheme operates two to four times a month depending on their budget (they get donations from private donors and businesses), feeding over 200 people at a time.

“We’re also using the garden to put pressure on the local municipality for water,” said Ahmed.

“If we show them that this is what we are doing to develop ourselves, the least you can do is come and fill up our water tanks.”

Dr Beyers Naudé Local Municipality supplied the community — over 200 households — with two water tanks, which the community says they have to constantly ask to be refilled.

Like many informal settlements in SA, Vrygronde doesn’t get basic municipal services like refuse collection, sanitation or electricity — despite over 1,000 people residing there.

“The major problem is that people in informal settlements have to remind the local government of their existence,” reflected Ahmed.

Starting their own plastic-free store

The main purpose behind the Skhaftin road trip is to spread the idea of a plastic-free store (which is more affordable) in the hope that a community along the way will start their own.

“I am not saying that low-income areas need to figure the climate crisis out. But the thing is, we all have to reduce plastic,” said Stein, the founder of Stein.

Vrygronde community is an informal settlement and doesn’t have a refuse collection, bins or skips. The community has resorted to creating dumpsites in areas throughout their community.

Ahmed said the Vrygronde community usually buy their produce at local spaza shops and thinks that the concept could help their community because the low-cost model will “give the normal man on the street pocket concept.”

Stein, said, “because the community members already bring a container anyway [for the feeding scheme]  they obviously immediately get it.

“And if you now add a small shop to it with the same principle people can, just with the money that they have, buy the portions they need,” said Stein, adding that this would in turn help the feeding scheme generate income as they are reliant on funding.

Chriszanne Janse van Vuuren, programme manager at SCLC said, “I have no doubt that it can work very well,” explaining that the community doesn’t have any shops in their settlements and most people are in desperate need of a low-income alternative.

“Introducing this concept will improve the community’s access to food.” DM/OBP