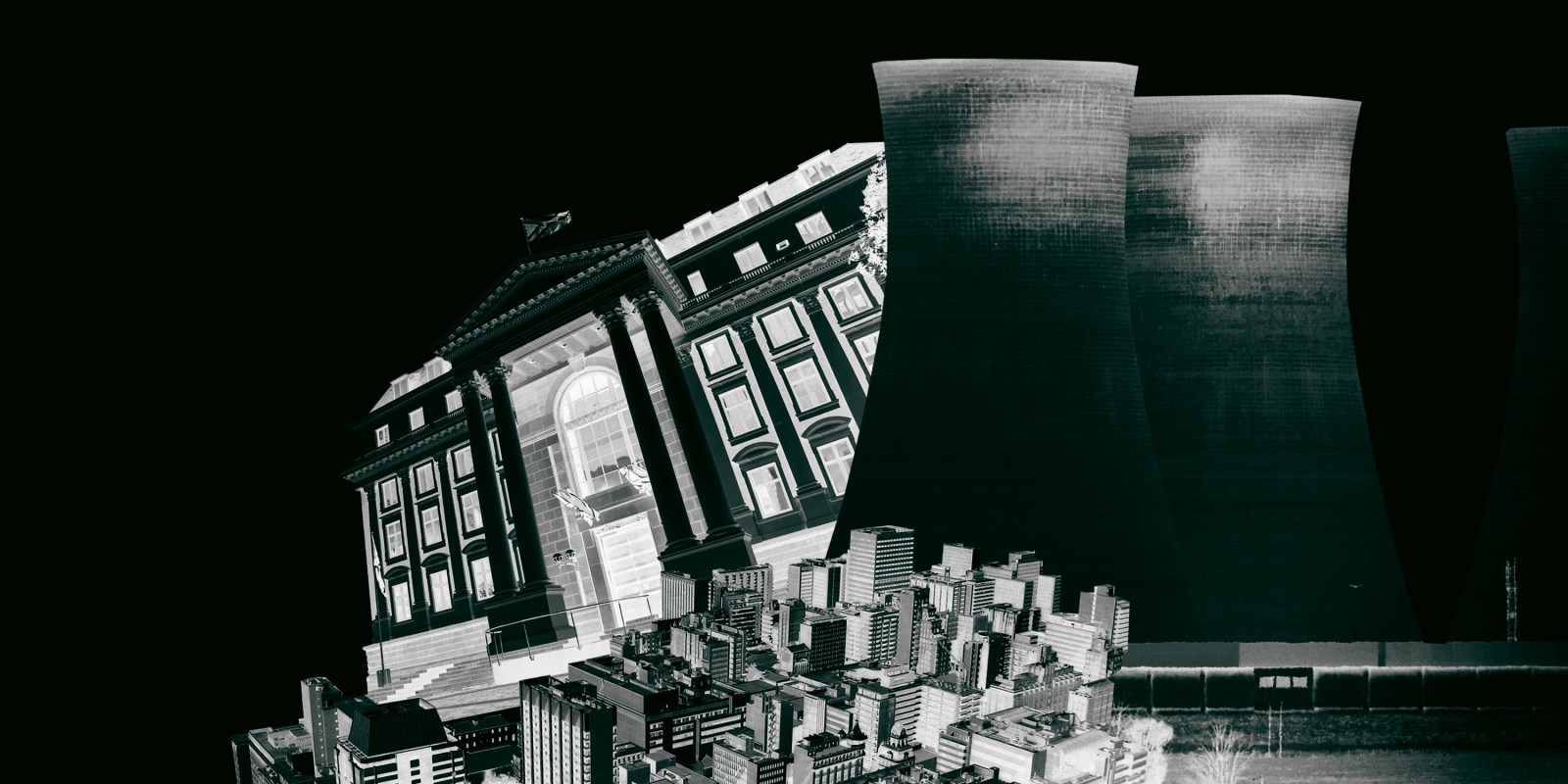 Public Enterprises Minister Pravin Gordhan paused to highlight the missing bits in Thursday’s parliamentary debate on ‘the energy crisis and Eskom’s protracted failure’. These included State Capture, the Guptas and the Zondo Commission’s findings on the national power utility.

Pravin Gordhan had a point: most of the debate from the opposition benches was about the ANC’s ineptitude, at best. And at worst, its criminality.

While the public enterprises minister argued against perceptions that all ANC members are criminals – “don’t call us all thugs. We are the people who are trying to fix South Africa… and we will succeed” – the ANC speakers proved fudgy by stating the ANC had acknowledged mistakes, was self-correcting and had committed itself to fighting State Capture.

But the Zondo Commission report on Eskom released on Friday, 29 April, is clear:

“South Africans thought that the ANC government was in control of Eskom but it was not. It had relinquished control to the Guptas and those people the Guptas wanted. The ANC and the ANC Government should be ashamed that this happened under their watch.

“The question that the people of South Africa are entitled to ask is: where was the ANC as the Guptas took control of important SOEs such as Transnet, Eskom and Denel?”

The report does not mince words:

“We also know now that the Minister of Public Enterprises at the time, Ms Lynne Brown, was a Gupta associate. So, the Guptas had the minister responsible for Eskom on their side. Furthermore, they had a number of the members of the Board of Eskom on their side…”

But even as Gordhan outlined steps taken to deal with Eskom challenges following the systematic State Capture – appealing for support, constructive criticism and patience – he was let down by his own side.

“Load shedding is the decline of electricity sales, which has dropped over the years as some of these bulk buyers shifted to less electricity intensive technologies,” said ANC MP Judith Tshabalala, offering her list of five “obvious” Eskom challenges the opposition was missing.

However, the causality is back to front. The lack of reliable sustainable electricity supply has led to the switch to alternatives. And in many ways, this was the motivation for the push from business for raising the licensing threshold to 100MW, as President Cyril Ramaphosa announced in June 2021.

“The demand for electricity exceeds the supply due to the rollout of the electrification programme in some areas that were denied electricity under this apartheid regime that we had, and President Ramaphosa in the Sona [State of the Nation Address] as far back as 2020 identified this problem…”

But research has shown that electricity connections have faltered in the Eskom push for cost recovery which has escalated electricity tariffs over 170% over the past decade.

While official statistics show electricity is supplied to 85% of homes, the question is – for what? Anecdotal accounts show often a light is used and a plug for charging cell phones. While the wealthier have switched to gas and solar, poor South Africans are increasingly returning to paraffin and candles.

Tshabalala said independent power producers (IPP) would not deliver more than 30% of energy – a claim disputed by energy experts and analysts such as her fellow ANC MP, Mikateko Mahlaule.

“The population and economy has grown since 1994 at a pace that Eskom cannot supply on its own,” said Mahlaule in his debate contribution he described as “analytical discourse”.

“What we are witnessing here with Eskom is neither a threat or failure, but merely an outcome of the instrumentalisation of democratic practices (to supply electricity to everyone) … Energy insecurity is not an Eskom failure, but a market failure.”

From the other side of the House, the politicking was equally rife as DA MPs pointed to ANC corruption, ineffectiveness and criminality.

“The member of the ANC protests too much. Market failures? Really? Ag nee,” said Freedom Front Plus MP Wouter Wessels, adding that Eskom has always had “an undisputed monopoly” on electricity.

“It’s Economics 101 – a monopoly always makes profits. Except under the management of the ANC. You managed to break all the rules.”

Earlier, DA MP Kevin Mileham said the electricity availability factor had dropped to an unprecedented 58% this year. And the outlook for the next three months looked bleak.

“Yet this government appears to be in complete denial of the urgency and seriousness of the electricity crisis.”

Rotational power cuts have been in place this week, and are scheduled to continue until 5am on Monday, 9 May. Eskom’s own outlook is flagged red for almost weekly persistent scheduled power outages until at least April 2023.

At its Tuesday briefing, Eskom was once again blunt about its challenges.

“We do not have enough capacity… You have this old system that’s taking a real beating,” said the power utility’s Chief Operating Officer, Jan Oberholzer.

Eskom knows exactly which unit is down for what reason – including the unplanned breakages. That the lights were kept on on Workers’ Day and into Monday was courtesy of a lower demand that could be met by running 16 open gas turbines during Monday evening’s peak.

“Due to depleted capacity and the delay in returning to service with a higher demand for electricity as the cold weather set in, there was insufficient power to meet SA’s demand,” said Oberholzer, explaining why Stage 2 is in place until Monday. Eskom needed between 4,000MW and 6,000MW additional capacity on the grid.

This is not only Gordhan’s mantra – again reiterated in Thursday’s parliamentary debate – but also that of Eskom CEO André de Ruyter.

Yet, when asked about delays in IPP Bid Window 5 – which is coming online only in July rather than the anticipated April (Eskom insisted that as far as its records were concerned, all was running on time) –  the politicking kicks in as it has on the extended timeline of the power utility’s unbundling.

The IPPs are run from the IPP Office in the Department of Mineral Resources and Energy, requiring the involvement of that department and Public Enterprises, in whose portfolio Eskom sits.

Asked when these IPPs would come online, De Ruyter said the budget quotes – or binding contracts in which Eskom undertakes to provide grid access at specified costs – could not be rushed.

“There is a target date… I don’t think it’ll be particularly constructive to give this date in public,” said the power utility’s CEO. “The agreements will be ready when they are.”

None of this is helpful.

This is what IFP MP Mkhuleko Hlengwa, chairperson of Parliament’s watchdog on public spending, the Standing Committee on Public Accounts, pointed out in kickstarting the parliamentary debate on a topic of national importance.

“Load shedding cannot become South Africa’s default position. It is not a solution to our energy crisis. We need urgent action now before we are left in the dark, permanently,” he said, adding that still, year after year, Parliament ended up “rubber-stamping” bailout billions.

“What have these billions bought us? Another 100 days of darkness during the cold, wet winter?”

Closing the debate, Gordhan said Eskom was “not broken … it is not dysfunctional, but it does have a crisis and it has a series of challenges”.

These challenges were being addressed, he said, and words of solidarity and encouragement were needed, not unrelenting criticism.

“Is there a threat of a protracted failure of Eskom? No. Because ultimately the Eskom that we know today won’t be the Eskom that you will recognise in 10 years. It will be a completely different entity.” DM