DARK SIDE OF GREEN TRANSITION 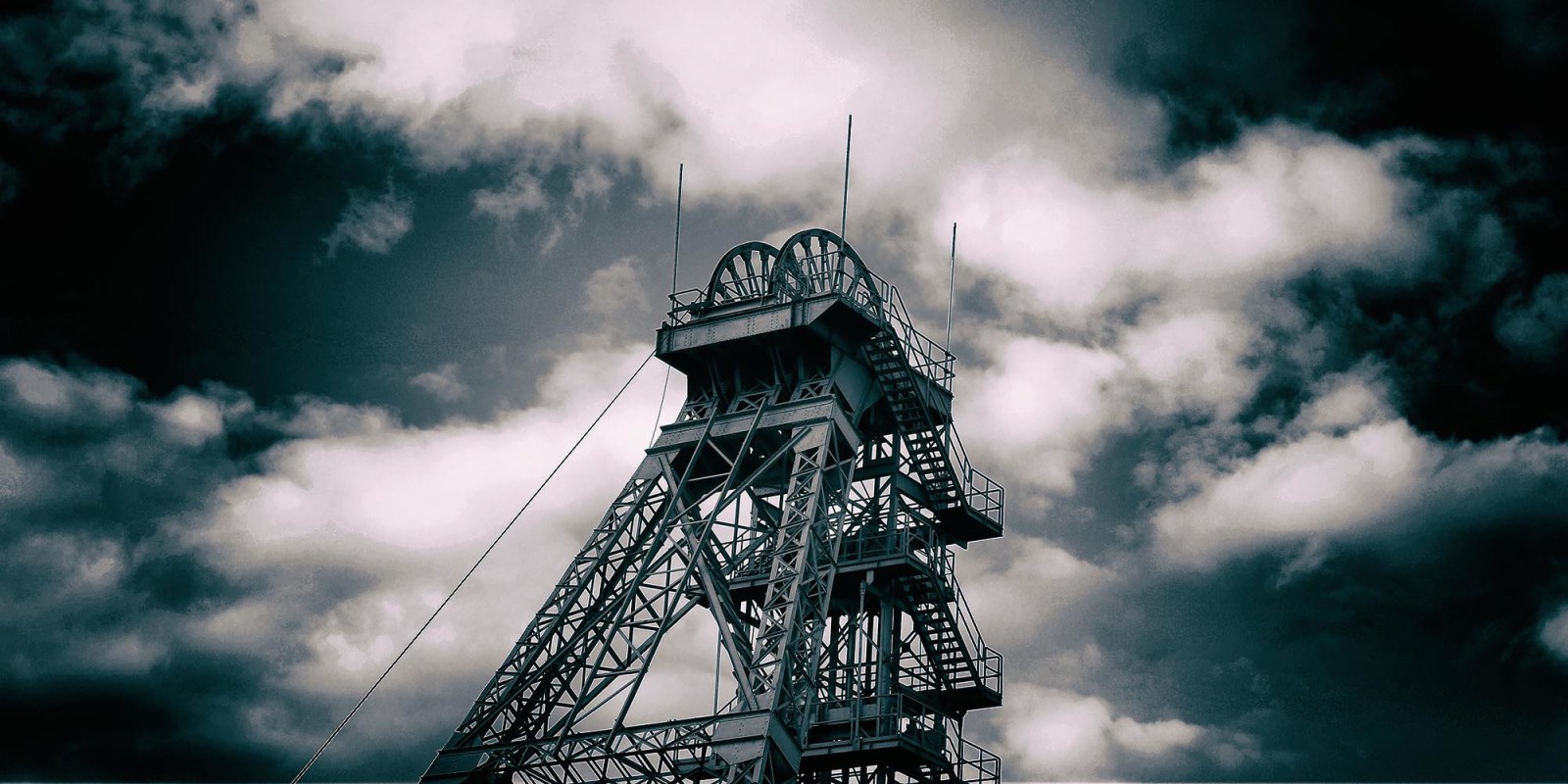 The Business & Human Rights Resource Centre has just released its latest report on alleged human rights abuses linked to transition minerals – those needed for the green energy transition. During 2021, 61 new allegations were uncovered against 28 companies, raising questions about the sector’s professed commitment to environmental, social and governance issues.

The allegations have been compiled by the Business & Human Rights Resource Centre’s online “Transition Minerals Tracker”, a tool designed for investors in environmental, social and governance (ESG) issues to guide their stewardship and ultimately their capital allocation decisions.

It uncovered 61 new abuse allegations in 2021 against 28 mining companies, bringing the total number of alleged human rights abuses since 2010 to 495.

The stakes are high as “green metals” are regarded as key to powering the transition from fossil fuels to cleaner energy sources to mitigate anthropocentric climate change – in short, to douse the flames engulfing our burning planet.

“Extraction of cobalt, copper, lithium, manganese, nickel and zinc – core components for renewable energy technology – is expected to rise dramatically with a global shift towards clean energy. Yet many of the companies producing these minerals are beset with allegations of human rights abuse,” the Business & Human Rights Resource Centre said in the report.

One-third of the allegations stem from reported attacks against human rights defenders (HRDs), making this the number one impact recorded in the Tracker, followed by water pollution. Of the attacks against HRDs, 111 were linked to copper mining, with nickel mining a distant second at 19.

“The Democratic Republic of Congo (DRC) is responsible for over 70% of the global production of cobalt and is also a primary producer of copper. Within Africa, nearly two-thirds of all allegations (52 of 82) recorded in the Tracker occurred in the DRC,” the report said. 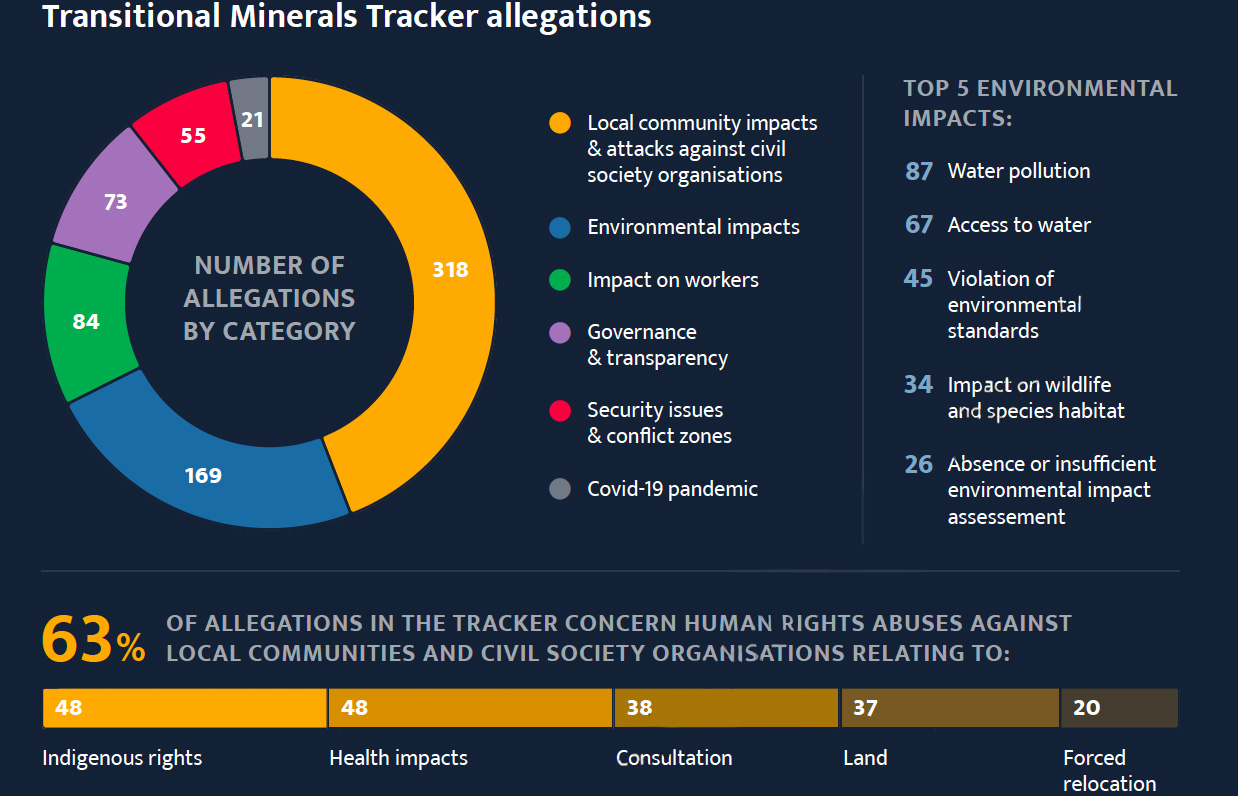 And only a handful of companies account for most of the allegations.

“Over two-thirds of recorded allegations involve just 12 companies, which are among the largest and most well established of the extractive sector,” said the report, published on 4 May.

They include big names with secondary listings on the JSE, such as Anglo American, Glencore and BHP.

“Globally, Glencore has the worst record. It was the company linked to the highest number of allegations in Africa, the second-highest in Asia Pacific and third-highest in South America,” the report said.

This can conjure up images of fat corporate cats smoking cigars while plotting ways to undermine rural peasants, but that would frankly be an unfair caricature. What often seems to be the case, according to the report, is that “companies continue to struggle with the capacity to mitigate and remedy abuse”.

Decisions at the top of the corporate food chain don’t always translate into good corporate governance at the bottom in jurisdictions where the laws are like cobwebs.

“Glencore produces commodities that are essential to the transition to a low-carbon economy, and has aligned its strategy with the goals of the Paris Agreement,” Glencore said in an emailed response to Business Maverick queries about the allegations outlined in the report.

“Our Code of Conduct and Human Rights policy set out our commitment to upholding respect for human rights of our workforce and host communities and in our supply chains.

“Our assets are located in diverse contexts, some in highly developed countries with strong legal and political frameworks, and others in more challenging socio-political circumstances with a history of conflict, limited basic services and weak rule of law.

“We measure and monitor our community impact and aim for continuous improvement, and report transparently on the challenges and progress in this area,” said Glencore.

Anglo American said it would respond but had not done so at the time of publication. BHP had also not responded by late Wednesday afternoon.

The report noted that in an age when ESGs have taken centre stage, allegations of rights abuses and environmental degradation did not sit well with investors.

“The impact of this level of widespread abuse goes beyond those whose rights are impacted; it is also bad news for business. Companies with poor human rights records expose themselves to reputational risk and hesitation by responsible investors and threaten the progress of the global energy transition as communities increasingly push back against violations of their rights,” said the report.

The Business & Human Rights Resource Centre’s recommendations to investors include undertaking “vigorous human rights and environmental due diligence and review potential investees for any past involvement with retaliation. Avoid investing in companies with this track record.”

For companies, it recommends setting “a clear and urgent goal to implement human rights and environmental due diligence in operations and supply chains”.

Frankly, many mining companies are already implementing such goals and investors are already making such demands – there is a reason ESGs are a thing.

More broadly, the report highlights threats to the green transition, which is also supposed to be a key part of the ESG drive. Without the extraction of green metals, things like wind turbines and solar panels cannot be built and electric vehicles cannot be powered.

This new resource scramble is being driven by environmental and social concerns. It should not give rise to new ones. DM/BM/OPB