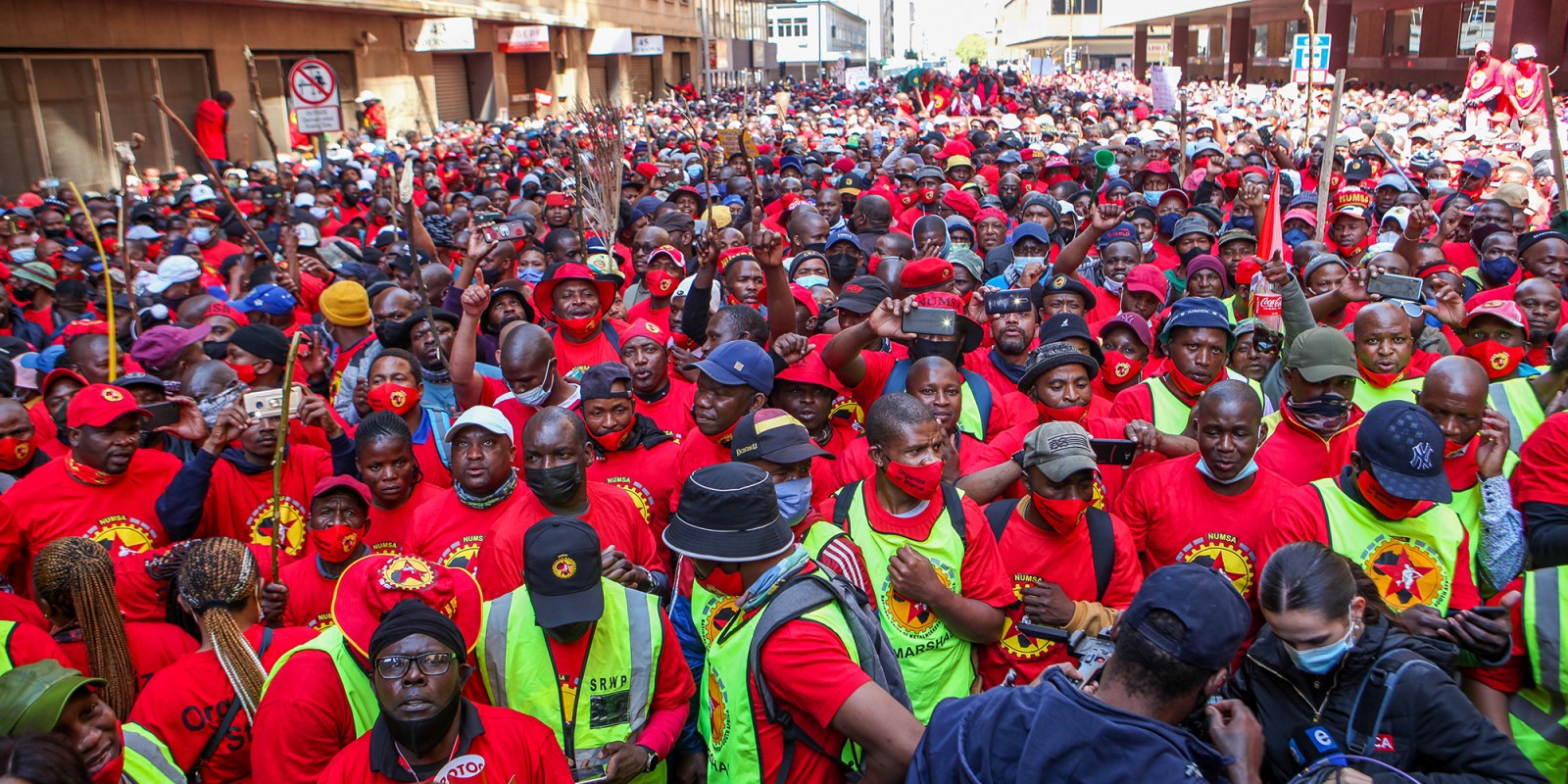 Business Maverick has seen a document that summarises the consolidated demands of trade unions, which include a 10% wage increase applying to all public servants – regardless of their employment level or number of years in service. This increase would cover the government’s 2022/23 fiscal year.

The stage has been set for a bitter clash between the government and public sector unions, with the latter proposing a one-year agreement that affords SA’s public servants wage increases of 10% for 2022.

Trade unions representing public servants formally tabled their wage demands and other remuneration benefits on Wednesday at the Public Service Coordinating Bargaining Council (PSCBC). The PSCBC is where trade unions and the government negotiate the conditions of employment in the public sector.

Business Maverick has seen a document that summarises the consolidated demands of trade unions, which includes a 10% wage increase applying to all public servants – regardless of their employment level or number of years in service. This increase would cover the government’s 2022/23 fiscal year.

Other demands include a R2,500 increase in the housing allowance afforded to public servants, the introduction of a bursary scheme for their children, relief funds for disaster periods such as Covid-related lockdowns, and measures that allow public servants to easily access pension savings if they fall on hard times.

But the Department of Public Service and Administration (responsible for public sector employment conditions) and National Treasury will arguably be taken aback by the 10% wage increase demand for several reasons.

First, the proposed wage increase is well above consumer inflation, which measured at 5.9% in March, according to Statistics South Africa. The 10% wage increase demand is even high by historical standards.

Over the past decade, the consumer inflation rate has always been built into the structure of wage adjustments – known as a “cost of living” increase. Up to two percentage points would be added on top of the inflation rate to reach the final wage adjustment rate. The two percentage points would be for pay progression, which is awarded to public servants for their years of service or performance.

Second, Treasury has already committed to not award public servants inflation-beating wage increases because it wants to wrestle down the wage bill to more affordable levels. In 2022 alone, the government will spend R682.5-billion to remunerate SA’s 1.2 million public servants, including nurses, doctors, teachers and police officers – the largest component of government spending.

But trade unions believe that public servants – many of whom are on the front line against the Covid-19 pandemic – have made “enormous sacrifices” for the government over the past two years.

“Public servants also deserve wage increases,” a union boss told Business Maverick, adding that over the past two years public servants had not been awarded inflation-linked wage adjustments because Treasury had embarked on a wage freeze to rein in ballooning government expenditure and debt.

All that public servants received in 2020 and 2021 was a 1.5% “pay progression”, which had always been pencilled in by Treasury.

On top of this adjustment, Treasury offered public servants an after-tax cash gratuity (or bonus) of R1,000 a month in 2021 to sweeten its offer. Treasury is prepared to extend the gratuity for another year.

At the PSCBC, the trade unions have also proposed big changes in how their remuneration is negotiated. The unions are now negotiating wage adjustments for a single year (2022). This is a departure from past practices, as trade unions and the government preferred to conclude a multi-year wage agreement, covering at least three years. Multiyear wage agreements allow the government to plan for finding money to fund wage increases for public servants.

The unions also want a “written commitment” from the Treasury, mandating the Department of Public Service and Administration to enter into wage negotiations. This would have the effect of binding Treasury and the department on whatever is agreed to with unions.

The bargaining position of the unions in wage negotiations was weakened after they lost their case at the Constitutional Court in February that sought to force the government to implement wage increases of about 8% in 2020, under the last leg of a three-year wage agreement.

The top court tossed out the union’s case because representatives of the department had signed the last leg of the three-year wage agreement without Treasury’s concurrence and also without knowing if money would even be available to fund these increases. DM/BM