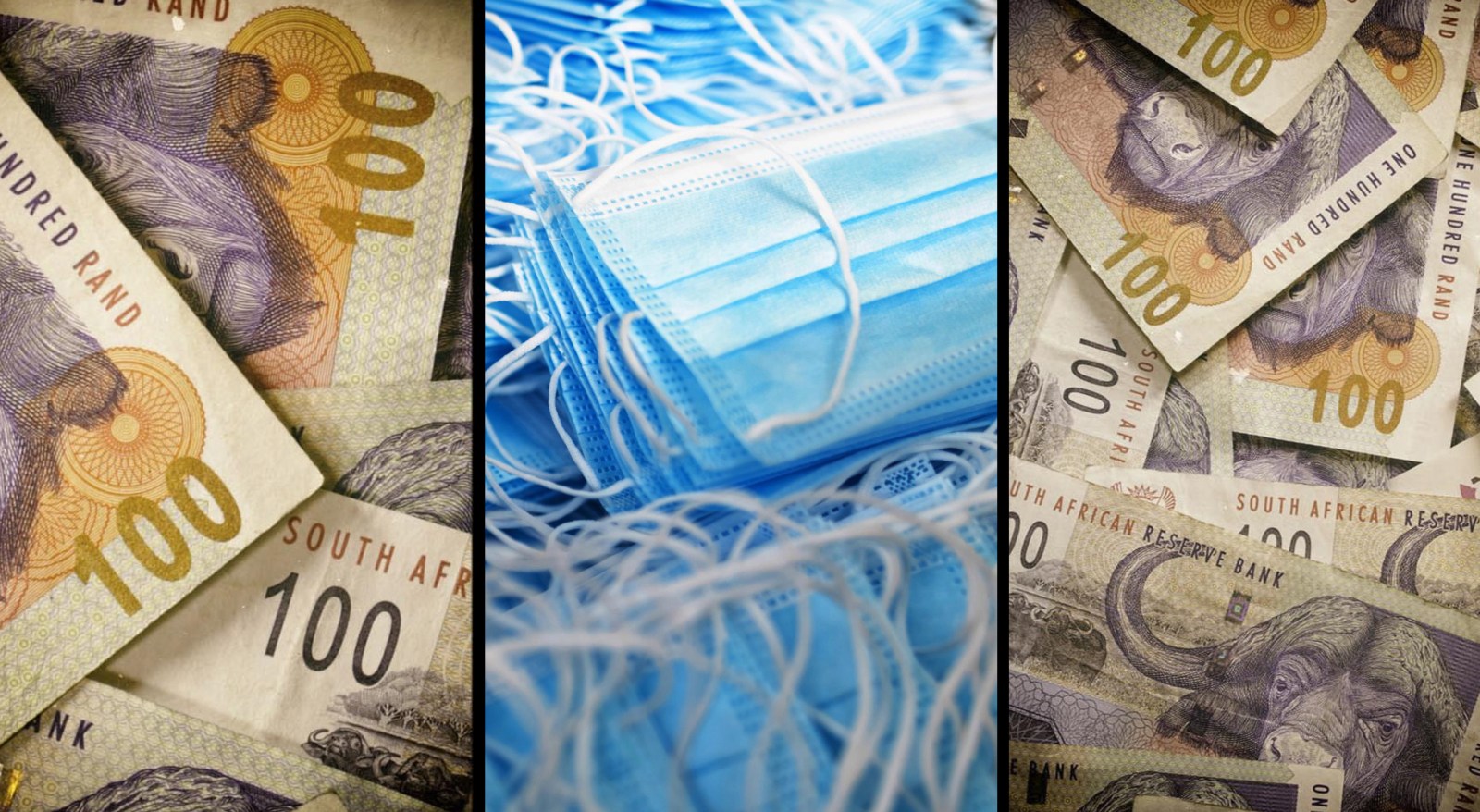 Last Friday, 29 April 2022, The Competition Tribunal announced that Tsutsumani Business Enterprises CC had charged the SAPS excessive prices for the urgent supply of 500,000 face masks. It has ordered the supplier to pay a R3.4 million administrative penalty within 30 days. (Photos: AdobeStock / iStock)

A groundbreaking Competition Tribunal finding that a mask supplier to the SA Police Service was engaged in price gouging should revive investigations into SAPS’ R1.6bn PPE splurge and some of the companies that benefited handsomely. But will it?

The Competition Tribunal announced last Friday it had found that, in April 2020, during the first hard lockdown of the Covid-19 pandemic, Tsutsumani Business Enterprises CC had charged the South African Police Service (SAPS) excessive prices for the urgent supply of 500,000 face masks. It has ordered the supplier to pay a R3.4-million administrative penalty within 30 days.

The tribunal’s reasons “will be publicly available in due course”.

In a separate statement released on the same day, the Competition Commission stated that “the Tribunal essentially found that Tsutsumani exploited the crisis presented by the pandemic, and in response to a request for a quotation sought on an emergency basis, charged the SAPS R16,250,000 for the bulk supply of 500,000 surgical face masks”.

The Commission said the tribunal found that “Tsutsumani charged the SAPS an excessive price of R32.50 (inclusive of VAT) per mask” — masks which the Commission, in its own earlier investigation, found Tsutsumani had procured from its suppliers at an average cost of R17.35 per mask.

“This means that Tsutsumani earned a total of 87% markup and 46% gross margin per mask. The Commission estimated that the excessive profits earned amounted to R5.3-million.”

According to the Commission, “the yardstick that we used during the pandemic as a price benchmark was a markup of between 15% and 20% that we found was reasonable”.

Gillian de Gouveia, spokesperson for the tribunal, says the judgment is significant in that it is “the first excessive pricing case referred to the Tribunal by the Commission in the context of a tender process during the pandemic”.

Competition Commissioner Tembinkosi Bonakele calls the ruling “one of the landmark price gouging cases that the Commission has successfully prosecuted since the advent of the pandemic”.

He says “these prosecutions have uncovered how both state organs and vulnerable consumers and customers were exploited during the lockdown occasioned by the state of national disaster.

“The maximum fine imposed by the Tribunal sends a clear message that price gouging in public procurement to exploit a crisis or emergency situation is viewed in a serious light by competition authorities.”

However, much as Friday’s ruling is welcome, activists say it also raises expectations about another overdue judgment from the tribunal, this time against two companies, Blue Collar Occupational Health (Pty) Ltd and Ateltico Investments (Pty) Ltd, on allegations of excessive pricing of bulk hand sanitiser.

Both the Tstusumani and Blue Collar cases were handed over to the tribunal by the Competition Commission on 3 September 2020 (read the commission’s original statement here).

The importance of these judgments (when Blue Collar is eventually handed down) is that they should set a benchmark for further cases involving allegations of excessive pricing of Covid-19-related PPE to the SAPS.

Last year Maverick Citizen was told by two sources (who contacted us independently of each other) that the prosecution of Blue Collar Occupational Health for excessive pricing raised questions because other companies had charged higher prices for sanitiser and been awarded contracts with SAPS. They told us that when “some of those close to the process questioned this… they were warned that it would be ‘dangerous’ to pursue this issue any further”.

This may be because it risks disturbing unresolved issues surrounding investigations into allegations of wide-scale corruption in the SAPS’s R1.6-billion PPE splurge in April/May 2022.

It is notable, for example, that Tsutsumani had already been flagged in a leaked September internal compliance review into the SAPS supply chain management as one of 34 companies where there was “irregular expenditure, verbal authorisation and no sufficient quotations obtained”.

In October 2021, Maverick Citizen published a breakdown of tender beneficiaries and SAPS spending on PPE by Corruption Watch’s Kavisha Pillay (available here). According to Pillay’s analysis of data published on the National Treasury dashboard of Covid-19 expenditure by government departments:

“In the period between March and May 2020, the SAPS procured 43,559,996 masks — enough to give at least one mask to 72% of South Africa’s population. Prices varied, with the lowest service provider charging R9.50 per mask and the highest service provider, The Dream Events, charging R155 per mask.”

In another data deep dive and analysis conducted by OpenUp in conjunction with Maverick Citizen, published in January this year, we recorded how SAPS spent R879-million on “surgical masks for patients” (53% of all government spending under the item). They purchased 43.6 million units of boxes of 50 masks at an average of R20.17 per unit. Most of these purchases happened during March and May 2020.

On the face of it, this makes the R16.2-million charged by Tsutsumani and their excessive profit of R5.3-million seem like relatively small change in the bigger scheme of the SAPS PPE splurge.

Indeed, prima facie evidence exists — on the Treasury’s website nogal — that a significant number of other companies also charged excessive prices. This was in fact a finding of a SAPS internal audit — so why was only one company reported to the Competition Commission?

In response to this question, a high-ranking official in the SAPS told us that it is “suspicious, it looks like they are protecting themselves, it looks like collusion… reporting some companies to draw attention away from others”.

Last year Maverick Citizen carried out a detailed investigation into Red Roses Africa (Pty) Ltd, a curious company which scored more than R500-million for the supply of sanitiser and masks. In a statement released in response to our investigation, Red Roses Africa (RRA) claimed that its pricing had been reviewed by the Competition Commission.

“On 5 May 2020, SAPS referred RRA’s and other supply contract pricing to the CC for investigation; the CC received RRA’s full co-operation between May 2020 to July 2020 when CC’s in-depth and exhaustive investigation was conducted. RRA finally confirms that CC has not made any adverse findings against RRA following the CC investigation.”

However, Siyabulela Makunga, head of communications at the Competition Commission, contradicted this. In an email in October 2021, he told us that “in the complaint [submitted to the CC about price gouging by PPE suppliers], Red Roses was cited as Mainstreet 699 (Pty) Ltd. Later into the investigation, the CC found that Mainstreet changed its name to Red Roses”.

Makunga told us that RRA “is being investigated for price gouging… investigations against two firms, Red Roses and Basadzi Pele, are ongoing”.

In a follow-up email, we asked Makunga about the reason for the year-long delay in the Red Roses Africa investigation, particularly since a competitor company was prosecuted for the same offence. He replied: “We are waiting for the Tribunal decision on the two cases on price gouging in public procurement that we prosecuted.”

Now that one of those judgments has been handed down, it would seem that the ball is once more in the Competition Commission’s court. DM/MC