Governance by launches, site visits and speeches not enough when details and corruption-free implementation are MIA 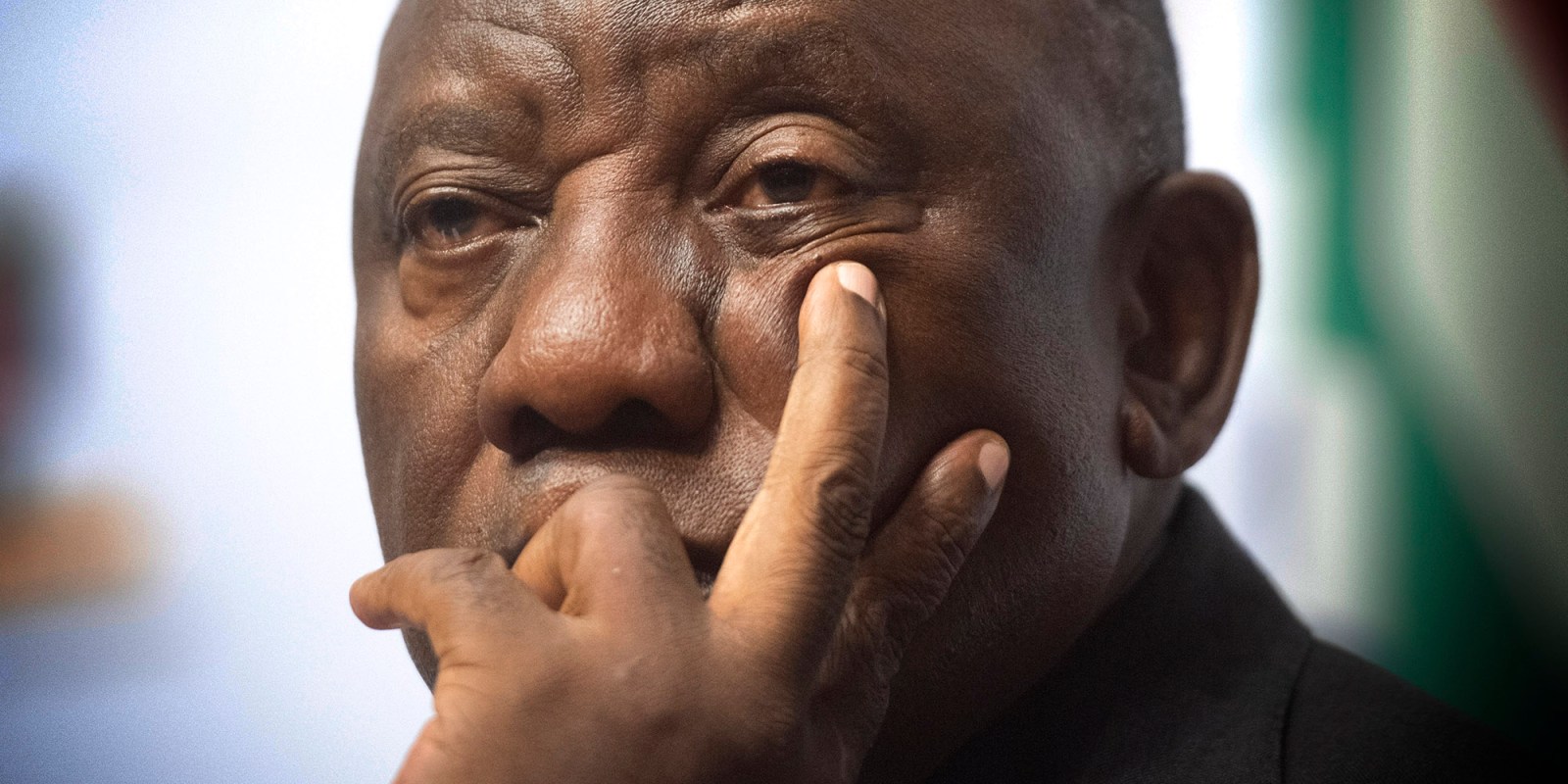 President Cyril Ramaphosa during a briefing at the Imbizo center at Parliament in Cape Town, South Africa. (Photo: Brenton Geach)

Optics are important in any government, anywhere. Politicians want to look good. But when optics, and pretty words, are all that’s delivered then governance is fractured. And public trust remains in the doldrums.

In his third address to a joint sitting of Parliament — others were on gender-based violence (2019), and South Africa’s economic reconstruction and recovery (2020) — President Cyril Ramaphosa left more questions and answers on the devastating KwaZulu-Natal floods.

No details emerged on the R1-billion Finance Minister Enoch Godongwana had publicly talked about. No details emerged about the monies government would transfer to the Solidarity Fund for flood relief and reconstruction.

Some funding would come from reallocating existing budgets of departments, provinces, municipalities and public entities, while another source was the contingency reserve. “It will, however, only become available once the 2022 Appropriation Act is enacted,” said Ramaphosa on 26 April.

It’s not clear if that’s a reference to the R1-billion previously talked about. Regardless, nothing will become available for some eight weeks, or before late June.

The president’s address to the joint sitting followed his televised national speech on 18 April when he said, “The Minister of Finance has said that a R1-billion is immediately available, and will be approaching Parliament for the appropriation of additional resources.”

No clarity could be obtained from National Treasury on this — Parliament would need a Special Appropriation Bill tabled by Godongwana — or whether tapping into the contingency reserve was an option.

On 20 April, a written request for clarification triggered an automated response “… Please note that the turnaround time for a response is 24 to 48 hours but can be less for some queries…” from National Treasury — and nothing further despite a follow-up email on 26 April.

National Treasury emailed responses at 2.35pm on 29 April, saying “No special appropriation is required at this stage”.

By the last public account, some R17-billion could be involved, given the flood damage estimate by KwaZulu-Natal’s government. The contingency reserves are R5-billion.

Sticky governance at a time of public distrust of government, and concerns that officials and the politically connected would corruptly misuse donations for flood relief in a replay of the Covid-19 personal protective equipment and other corruption.

Fudging details to control optics seems to be the standard operating governance procedure. But this can and does boomerang — especially when the governing ANC wants to artificially divorce itself from governance problems of its own making.

“Eskom does not give us a whole picture; what they say does not add up. We want the full story on what is happening with maintenance, since we have been told that maintenance plans are the major reason for this load-shedding,” she told Business Day.

But Kubayi does know Eskom, which has featured large in Nedlac not only in debates on dealing with its R400-billion debt, but also as part of ensuring stable and sustainable energy supply for South Africa’s economic recovery.

She would have at least seen, but more likely signed off on documents like the 15 September 2020 Framework Agreement for a Social Compact on Supporting Eskom for inclusive Economic Growth that was part of discussions towards South Africa’s Economic Reconstruction and Recovery Plan.

“The parties recognise the need for publicly articulated support by constituencies for the Eskom management and its key stakeholders as Eskom undertakes a reform of its operational model and improves its skills base.”

Kubayi might want to argue her public comments were in her ANC capacity, not as a Cabinet minister or a government Nedlac rep. But such artificial divorcing of the governing ANC from the ANC government, no matter how much the ANC may want to distance itself from Eskom’s rolling power outages, falls flat and, crucially, seems to play the public for fools.

In the governing ANC, its Chancellor House was implicated in dodgy dealings with Hitachi, the Japanese company that in September 2015 paid some $19-billion to the US Securities and Exchange Commission over improper payments dating back to 2005 when the construction of Kusile and Medupi power stations started.

But it’s all about the optics as the ANC and alliance partner, the South African Communist Party, publicly condemned Eskom board member Busisiwe Mavuso, also CEO of Business Leadership South Africa. She had called out the “ANC mess” at Eskom for which neither the power utility board nor executives would take the fall, she told Parliament’s public spending watchdog, the Standing Committee on Public Accounts (Scopa).

It was a heated exchange with Scopa chairperson Mkhuleko Hlengwa on 22 April, for which the IFP MP said in a statement on Tuesday after a party executive meeting that he would apologise.

Kubayi’s populist posturing aside, Ramaphosa stepped up to the Nedlac agreement to express support for Eskom’s officials in his regular From the Desk of the President on Monday, 25 April.

But Eskom is not an isolated example of governing ANC and ANC government disjunct. Land is another.

Expectations and emotions have been fanned over the past four years by the push for expropriation without compensation — a last-minute 2017 Nasrec conference win of the ANC’s radical economic transformation grouping that got legs with ANC support of an EFF motion in February 2018.

The push for a constitutional amendment to make this possible ultimately failed in early December 2021 after the ANC and EFF fell out over state ownership of land.

But land reform remains key to ANC economic policy, according to its leaked draft discussion documents for its upcoming policy conference.

Now land reform is to be facilitated through donations and a new agency that registers such transactions and monitors land reform progress. But, land donations are already possible under the 2007 Government Immovable Asset Management Act.

That this hasn’t happened is, in part at least, related to the fact that State-owned Entities (SOEs) retain land parcels as their value is important to the balance sheet, and the failure of the governing ANC as shareholder in SOEs to push for such land release.

And an agency that could handle such donations and transactions already exists — the Commission on Restitution of Land Rights.

The legislature and structures for land reform and restitution are all there — and have been for many years.

That land reform has stalled and that programmes for emerging farmers and other communities are not working is all about corruption, nepotism and elite-focus that accords benefits to the politically connected rather than those in need.

But proposing new agencies, new programmes, new what-what, the governing ANC defers and deflects. Problems of policy paralysis and failure to implement are kicked down the line. But this doesn’t do for governance.

It’s just off. Not only on Eskom and land, but also on the National Coronavirus Command Council (NCCC) about which the Presidency on Thursday did not respond to questions about whether it still existed now that the Covid-19 lockdown and State of disaster is done. And on grants.

The extension of the R350 social relief of distress grant to April 2023 that Ramaphosa announced in the 2022 Sona was widely welcomed as was the Budget’s R44-billion allocation.

No one expected any changes to the grant, which had already been extended twice during the two-year Covid-19 lockdown when it was a lifeline to 10.5 million South Africans who received no other grants.

But now only those earning R350 or less can reapply under the new regulations; under social assistance rather than the disaster legislation that applied in the Covid-19 lockdown.

On Monday, a coalition of civil society organisations, including the Black Sash and the Institute for Economic Justice, said in raising the alarm that “hundreds of thousands may now find themselves disqualified from assistance they have relied on to survive…”

Seven million South Africans have applied for this new R350 grant, even though they will be questioned every three months on whether they still need the support, it emerged in a ministerial social cluster briefing on Thursday.

Although new criteria were explained as necessary due to limited resources, the reality is National Treasury does good number crunching — the allocated R44-billion would have covered all existing 10.5-million recipients for 12 months.

With the governing ANC on public record as favouring broader income support, if not the actual Basic Income Grant civil society is lobbying for, government’s cutting access to the R350 grant makes little sense.

For a governing party that increasingly does government by event — from ribbon-cutting launches to televised national presidential addresses — it’s only a matter of time.

Optics, no matter how controlled, and vacuous words can only create so much wriggle room when public distrust runs so deep that the first question is how much of the flood disaster donations and relief will be chowed by corruption. DM