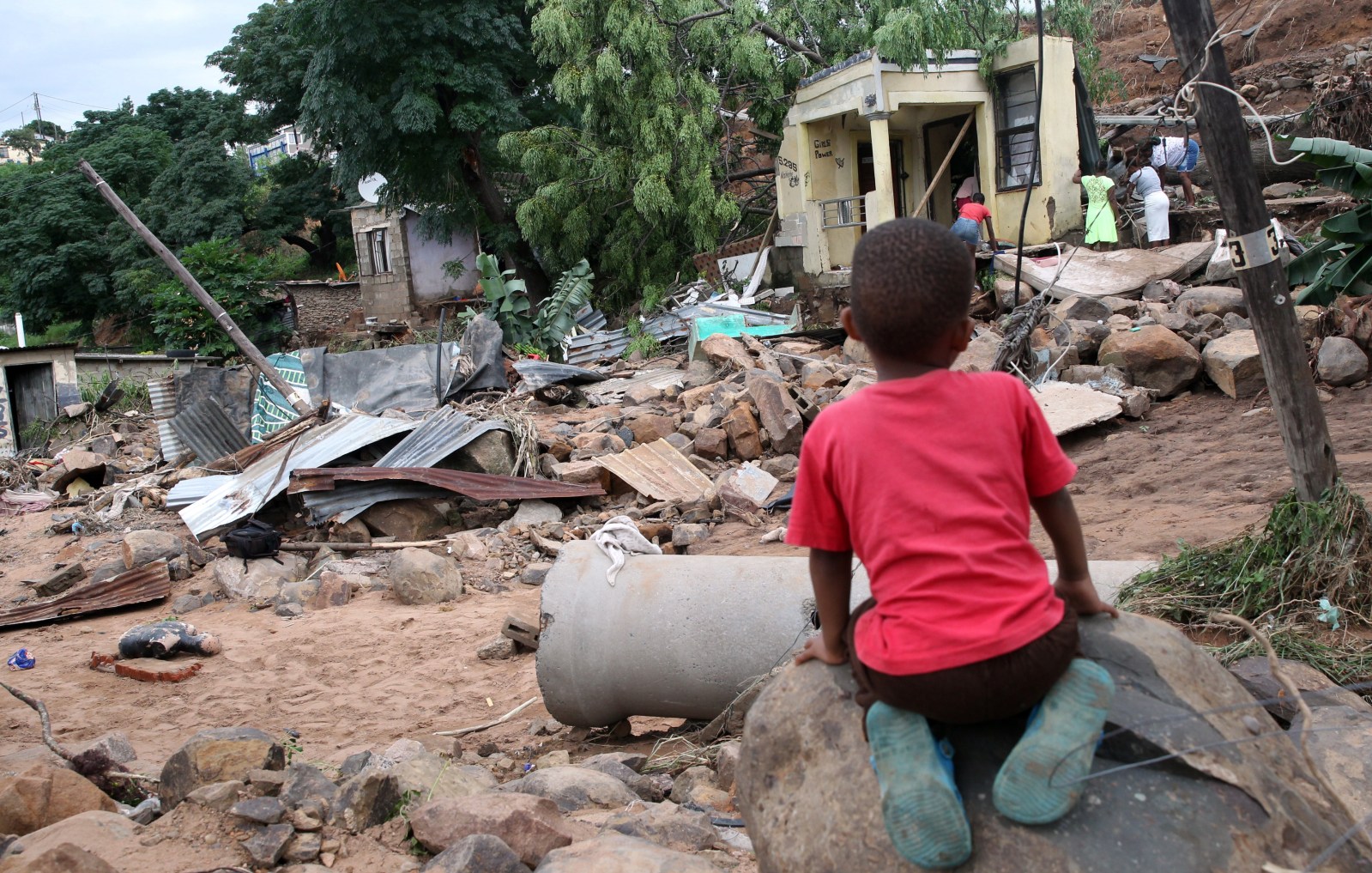 Children left homeless stare at the remains of their home after the floods in Nhlungwane, Ntuzuma. (Photo: Mandla Langa)

The minister of health said there are plans to ensure that donations reach those displaced by the recent floods, particularly the most deserving and vulnerable – women and children.

During a media briefing of the Social Protection, Community and Human Development Cluster on Thursday, Phaahla said that more than 8,400 people were being housed in 98 shelters established by the government.

Phaahla reported that the Department of Social Development (DSD) had been working at provincial and local level alongside churches, businesses and communities to provide cooked meals, blankets and dignity packs at shelters.

Phaahla said a donation of shipping containers had been secured from Transnet and the cluster would work with the Solidarity Fund and the National Empowerment Fund on how best to allocate the containers.

The DSD had prioritised assisting women, young people and persons with disabilities.

There are 1,700 children below 10 years of age who have lost their homes and are residing in shelters, as well as many children unable to attend school because of infrastructure loss.

Phaahla reported that the South African Social Security Agency (Sassa) had provided R5-million in Social Relief of Distress grants to more than 3,000 people and bought R372,000 worth of uniforms for learners affected by floods in eThekwini and iLembe districts.

Additionally, 633 learners who had lost their homes and belongings were being taken care of in community centres and were receiving books, clothing, basic necessities and counselling.

The majority of the people in shelters are women (4,700).

Phaahla said the DSD was monitoring shelters to ensure gender-based violence does not occur.

“What is important for this department is to monitor in the shelters that the women and young girls are safe so that there are no additional challenges of abuse and gender-based violence and femicide in the shelters themselves,” said Phaahla.

Phaahla confirmed that 64 learners, an educator and a food handler had died in the floods, with five learners still missing.

A total of 630 schools were affected, but not all of them are damaged and inaccessible. Phaahla said schooling is proceeding elsewhere in the province, but in the affected areas attendance was uneven.

Mhlanga said the school attendance rate in KwaZulu-Natal had increased to above 90% and that the department was making up for lost time with a comprehensive recovery plan put together by the province.

“We’re confident that they will be able to recover,” said Mhlanga.

President Cyril Ramaphosa announced during his State of the Nation Address that the R350 Special Covid-19 Social Relief of Distress (SRD) grant would be extended for a year, to March 2023, “to ensure that no person in this country has to endure the pain and indignity of hunger”.

Brenda Sibeko, the deputy director-general of Comprehensive Social Security, confirmed that because the extended grant is no longer under the National State of Disaster it has a new legislative framework, with additional qualifying and assessment criteria, meaning everyone – even those who have been receiving the grant – must reapply.

Since the application portal was opened on 23 April 2022, seven million people have applied, not the 12 million applications the department expected in April.

“We have reduced the means test now to R350,” said Sibeko. “I know that even that has made many people very unhappy. We wish to explain that we are dealing with the challenge of so much resource versus needs that are unlimited.”

Phaahla reported that according to their survey data, more than 13 million people in South Africa have no income, and more than 18 million are below the food poverty line.

As their budget only caters for 10.5 million people per month, they had to add criteria that restricted eligibility for the grant.

“In practice, we do believe the number is much lower, and that a zero-income threshold would result in less than 10.5 million being able to access the SRD,” said Phaahla.

“However, a food poverty line threshold is likely to result in much more than 10.5 million people qualifying for the grant. Hence, we opted for the lower threshold of R350, which we will monitor and revise as needed based on the uptake and budget we have available.” DM