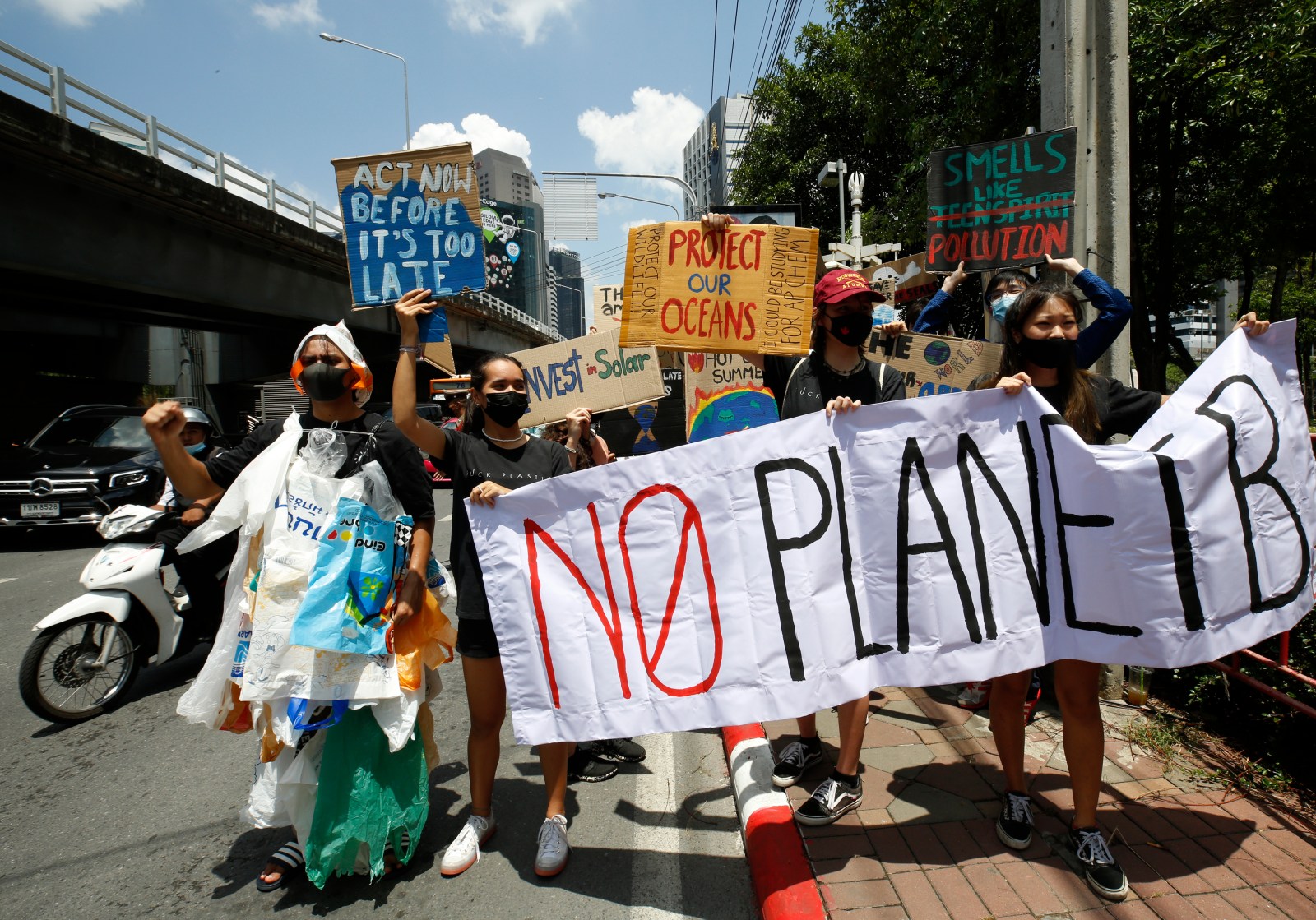 Activists hold signs as they march on the main road in the city during a climate change strike in Bangkok, Thailand, 22 April 2022. The movement is held to mark Earth Day for to protest and call to the Ministry of Natural Resources to change in the politics for handle the climate crisis in Thailand for to safeguard the planet and the earth's environment. EPA-EFE/NARONG SANGNAK

BRUSSELS, April 22 (Reuters) - Climate change campaigners kicked off a wave of protests for Earth Day on Friday, pushing demands such as an immediate halt to European imports of Russian oil and gas and an end to building fossil fuel infrastructure.

In Europe, activists in Berlin, Warsaw, Brussels and elsewhere were set for rallies outside German government or embassy buildings, where they will hand out red-stained roubles to symbolize blood covering a currency they say is fuelling both climate change and Russia’s invasion of Ukraine.

Germany is one of the European Union countries opposed to an embargo on Russian oil and gas for fear of damage to their economies.

About a dozen activists in the western Ukrainian city of Lviv also planned a protest. Parts of Lviv were hit this week by Russian missile strikes that killed seven people.

“When Germany continues buying gas and oil from Russia, it means that they are paying their money to construct new military machines, new bombs, which are killing Ukrainians,” Natalia Gozak, head of the EcoAction civil society group, said from Lviv.

Gozak said European politicians need to choose between an embargo’s economic “inconveniences” and the deaths of Ukrainians.

In the United States, activists from the Extinction Rebellion group blockaded a New York newspaper printing facility, where they called for more media coverage of climate change.

Youth protesters also gathered in locations including Bangkok and Stockholm, where Swedish activist Greta Thunberg joined the school strike – a weekly protest she began as a solitary student in 2018 to call for urgent action to address climate change.

The protests aim to amplify demands for climate action on Earth Day, when people worldwide celebrate and mobilise in support of protecting the environment. They come three weeks after a U.N. climate scientist report warned there is little time left for reining in greenhouse gas emissions sufficiently to prevent the worst impacts of climate change.

Earlier this week, Ipsos MORI released a survey in which two-thirds of around 20,000 people queried in 31 countries on Feb. 18 and March 4 said they were worried about a climate-altered future.

Since Moscow’s Feb. 24 invasion of Ukraine, the EU has spent more than 38 billion euros ($41.2 billion) on Russian fossil fuel imports.

Countries including Italy and Germany have said they can wean themselves off Russian gas within a few years, and some European companies are already shunning Russian oil voluntarily to avoid reputational damage or possible legal troubles.

But the EU states are split over whether to impose an immediate and full embargo on Russian fuels, which Germany and Hungary say would hammer their economies. The EU gets 40% of its gas from Russia.

The European Commission is assessing the costs of replacing Russian oil with imports from elsewhere, in an effort to persuade reluctant EU nations to accept an embargo, an EU source told Reuters this week.

The group wants to highlight the role that fossil fuels are playing in funding the Ukraine conflict, she said.

“It’s wartime. We have to brace for a longer marathon,” Lasota said. “The war will not stop with the last bomb that will fall…, it will end once we end the [fossil fuel] industry and the system behind it.”

“Germany is one of its main consumers and thus is the main sponsor of war in Ukraine,” said the letter, seen by Reuters. “You only need some political will and humaneness to impose a full embargo on Russian oil and gas.”