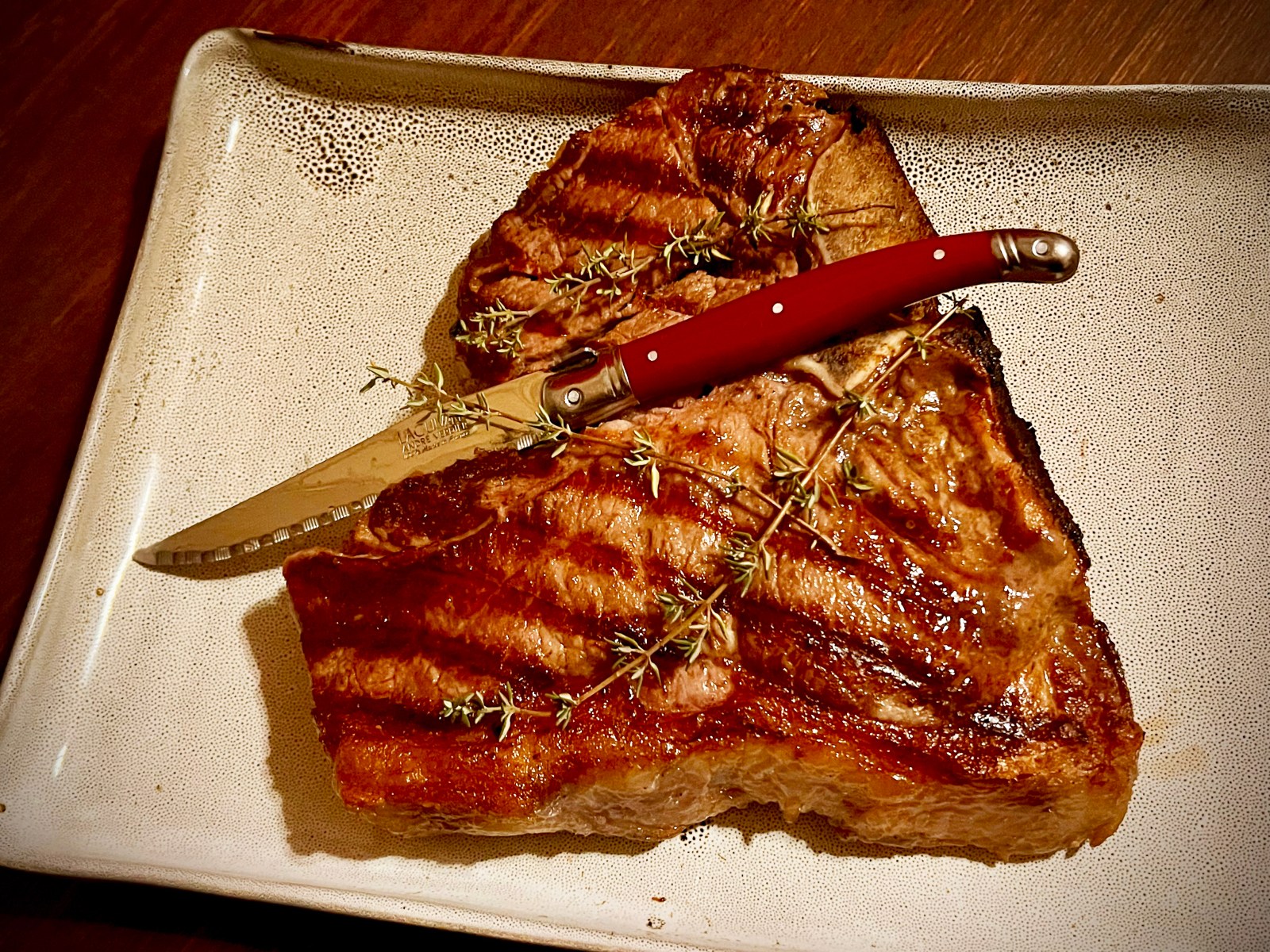 Tony Jackman’s Bistecca alla Fiorentina, served on a Mervyn Gers steak platter. As for the thyme sprigs, I had to garnish it with something... (Photo: Tony Jackman)

T-bone. Always hard to cook and come out perfectly tender on both sides. That’s because it’s really two things in one: sirloin on one side of the bone, fillet on the other. The Florentines have a solution, and it could revolutionise your T-bone steak regime.

You can buy beautifully thick T-bone steaks at certain supermarket butcheries nowadays, a good 3 cm to 4 cm thick and boasting a fairly sizable fillet component on the smaller side of the bone. This makes them perfect for the approach that a Florentine steak – or Bistecca alla Fiorentina – is famous for.

In Florence (and bear in mind that all chefs in that beautiful Tuscan city will have their own exact preferred method, and will swear on their nonna’s very soul that their way is right), they follow a particular technique, which is to cook it on one side first, the opposite side second, and then place it bone-side-down for 15 minutes. I watched a Florentine chef doing this on a Jamie Oliver show the other day and I knew I needed to hotfoot it to my local SuperSpar, buy one of the hefty T-bones they sell, and have a go at it myself. Or ask a butcher to cut a T-bone of 3 cm to 4 cm thick for you.

I rarely (so to speak) buy a T-bone, precisely because you’re cooking two steaks at once, each part needing its own cooking time, but you can’t separate them. If you cut the two parts off the bone you’d be defeating the object. You’d have one sirloin, and one tiddler of a fillet. It just doesn’t work. Or maybe it does…

In the episode I saw, chef Dario Cecchini cooked a steak for Jamie his way, and he is very particular and emphatic about it: It is cooked for eight minutes on the first side, another eight minutes on the second, and then it stands on its hard, bony edge for 15 minutes. All on a high heat; in fact, in his case, on open flame for some of the cook.

The theory is that this overcomes the problem one often has with a T-bone steak: the meat nearest the bone tends to be almost entirely raw, rather than the medium rare that is sought after. And Chef Dario insists that a T-bone cooked the Florentine way must, absolutely must, be medium rare, rather than rare.

But does it work? So I did exactly that last night and having done so it is clear that cooking on the bone edge sorts this out for you. The bone, while being directly on that intense heat, becomes a conductor of heat itself. The meat right there begins to cook through and further into what is usually the rarest part of the meat. The result is meat, right there, that is beautifully pink, in the way that a perfectly cooked rack of lamb cooked medium rare) is.

Other chefs argue for different timing. I read one chef’s recipe which calls for 12 minutes on the first side and nine on the second. Others advise less time; even as little as six minutes on the first side. I don’t think a T-bone as thick as this one would be cooked sufficiently, so only do that if it is, say, 2 cm thick. The one I had was 3 cm-plus at its thickest point, so I went with Chef Dario’s timing, and I was very happy with the result. As always, though, make your own assessment and decide when to turn it. What I would advise, however, is sticking to the full 15 minutes on the bone edge.

The other thing Chef Dario was emphatic about is that the only seasoning is salt. Nothing else. And his preferred fat is olive oil. Of course you can add a herb and black pepper if you want to. But I honoured his advice as I wanted to try to achieve the closest I could to that recipe for Bistecca alla Fiorentina.

The steak I bought weighed a challenging 986 g. Bear in mind though that probably a third of that weight is bone, but even so there’s plenty of meat. You can of course cook one of them for two, and carve the meat off the bone once cooked, to share. Or you can do what I did. I think you can guess.

Bring the T-bone to room temperature. At this cooler time of year I’d suggest having it out of the fridge for at least 2 hours, perhaps 3.

Cook the T-bone on one side on a substantial heat for 8 minutes. Best to set a timer; I used the timer on my cellphone. When you turn it, immediately set the timer again for another 8 minutes.

Now turn it onto its bone edge and shift it around until it’s nicely balanced. If it’s thick enough you should be able to keep it on that edge. Let it cook at the same high heat for 15 minutes. Again, set a timer.

Now give it a few minutes to rest before plating up or carving.

As for salting, you can choose either to salt it before you start cooking, or salt each side once cooked and before turning it on its edge.

I made some fried (after being parboiled) potato scallops and creamed mushrooms to accompany it. DM/TGIFood