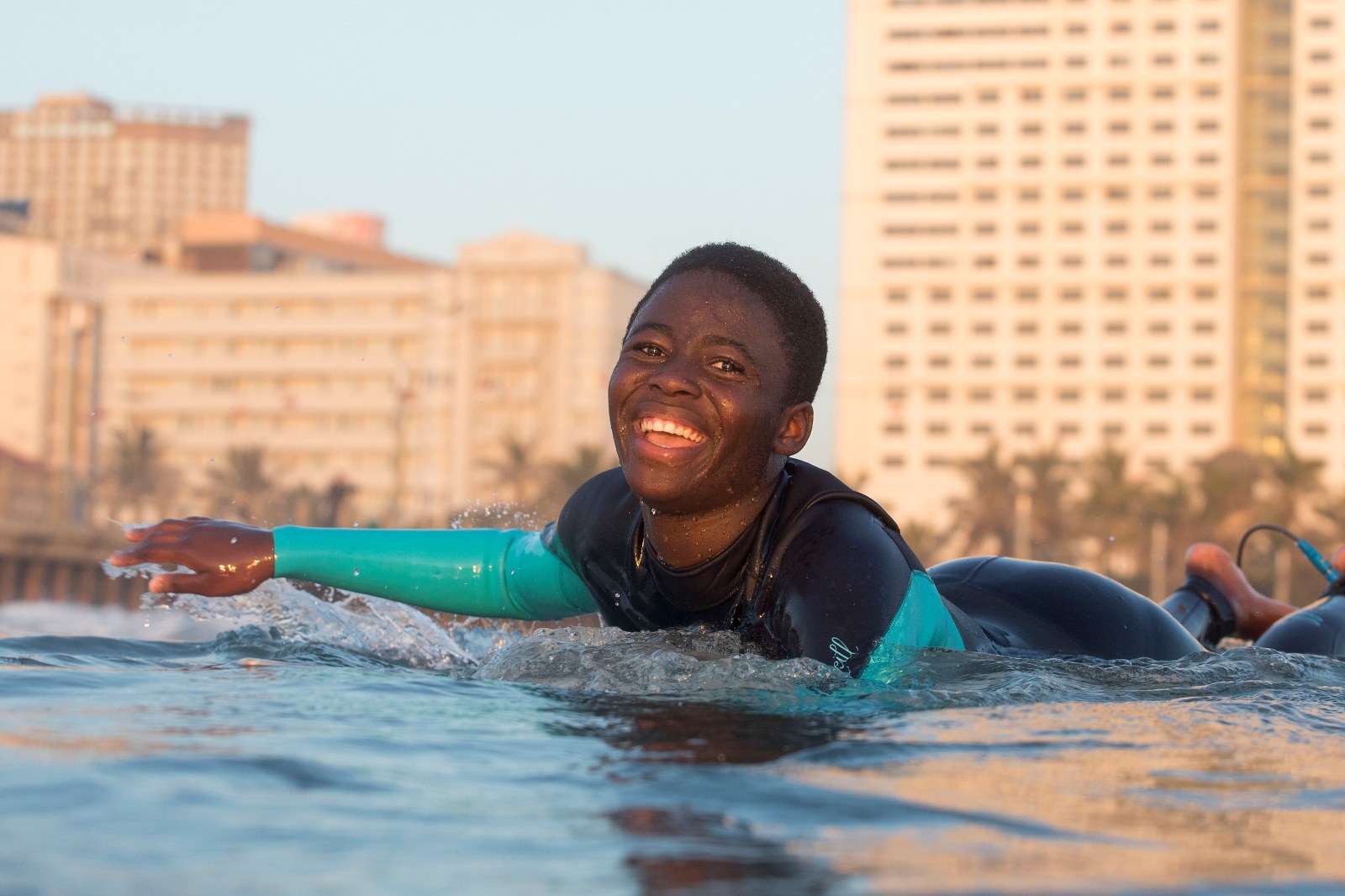 Indiphile Osinachi (14), a member of the Girls Surf Too programme, was selected for the national team at the World Junior Surfing Championships in El Salvador in May. (Photo: Luke Patterson / O’Neill)

The model for Surfers Not Street Children may be simple – fusing surfing with mentorship and care – but the role it plays in the lives of many vulnerable children in Durban is complex.

Surfers Not Street Children offers a diversion from the potential pitfalls of street life in an area marred by poverty, gangsterism and drug use, says Tom Hewitt, founder and CEO of the NGO.

The inspiration behind the surfing programme came in 1998: Hewitt was surfing when a child he had worked with previously approached the end of the pier and asked for a turn on the surfboard.

“I pushed him into a wave and heard him sort of hooting as he was going down the waves. He was loving it,” says Hewitt. “He ran up a pier and wanted to do it again, and it was like a lightbulb moment for me.”

At first, the organisation – known then as the Durban Street Team – worked almost exclusively with homeless children.

“As we were able to reduce the number of street kids and the socioeconomic scenarios changed… we realised that the context was changing, and that these families were ending up in shelters in the Point,” says Hewitt. “There were kids living in the Point that were being caught up in street life… literally by [virtue of] their geographic location and it being on their doorstep.”

Surfers Not Street Children broadened its focus to diverting at-risk children from being caught up in street life. Today, about 130 children take part in the programmes provided by the Durban branch of the organisation. Another 45 attend programmes at its club in Tofo, Mozambique.

The Durban branch offers programmes and, weather permitting, two surfing sessions every day. “It’s only a true diversion if it becomes what the kids do every day. If we’re going to do that, then we have to offer the whole range of not just the support services, but also things like homework programmes, because we want to be promoting their development on all levels, including school,” says Hewitt.

Children can visit the organisation’s surfhouse for access to computers and the internet, as well as learning and life skills workshops. A nutrition programme is available and open to any child in need of a good meal.

Funding for Surfers Not Street Children is an ongoing challenge, says Hewitt. Support comes from international funding and donations from the surfing community. The group has also worked to build sustainable income with branded merchandise, such as T-shirts and sweatshirts.

Trauma and addiction are major challenges the Surfers Not Street Children team face in their interactions with at-risk children: “Some of the kids… have really serious home situations, and so a lot of our work is about trying to identify how to strengthen families and look at the issues they’re facing,” says Hewitt.

Members of the organisation remain motivated by looking to the lives of the many kids who make it through.

“Just thinking about those kids who are now in their twenties, and even thirties, who are doing great, who have built families – they’re employed, they’ve transitioned … their cycle of poverty has been broken, that keeps us going,” says Hewitt.

She is part of the Girls Surf Too programme, which targets the needs of girls living at risk of “street connectedness” in the Durban Point area. Since its inception five years ago the programme has seen the development of the first crew of young black girls surfing in Durban, says Hewitt.

The programme allows these girls to explore something different and take their minds off the tough situations they face, says Sisonke Ndumndum, content creator and administrator at Surfers Not Street Children.

“Indiphile started surfing in 2017 with the Girls Surf Too programme… She’s part of the first generation of the… programme,” she says. “She’s been consistent, training hard, and she inspires other girls and pushes other girls in the programme to surf harder.”

Surfers Not Street Children used GoFundMe to raise money to cover Osinachi’s travel and equipment costs for the competition. It was one of the fastest fundraisers the organisation has initiated to date, says Hewitt, raising the money in just six hours. He credited the campaign’s success to Osinachi’s compelling story.

“[She has] become a real character in the programme, and she’s… fantastically jovial and confident and liked by the other girls. It’s really significant because she’s the first [to be selected] out of this crew of black surfers, the girls’ surf crew, so it’s a massive inspiration to them. And also, we’re talking about someone who’s growing up in the Point, a very humble sort of starting point.” DM168