KZN floods: ‘My wife called, telling me to return quickly because muddy water had seeped through our house’ 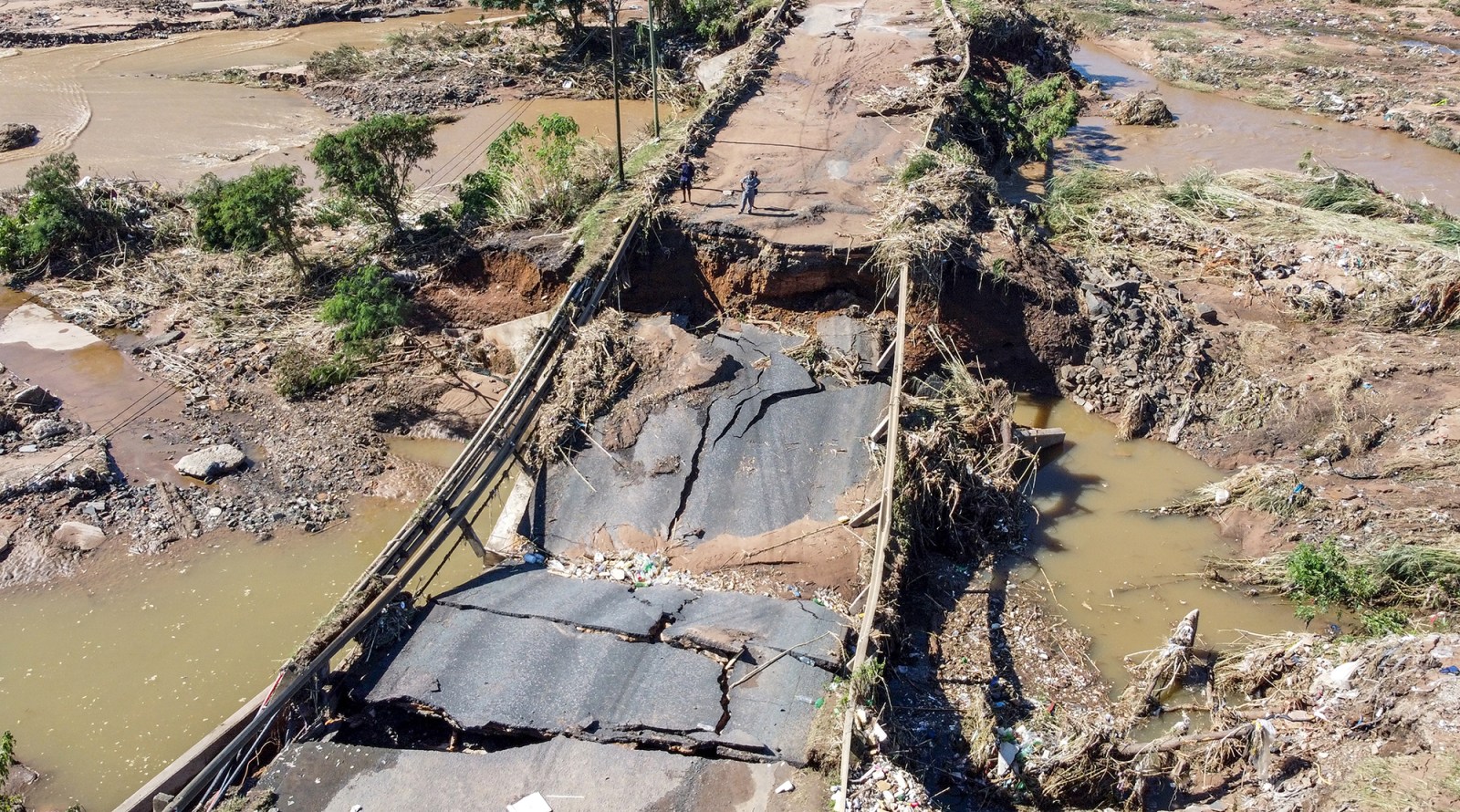 A drone image of a collapsed bridge in Durban North, on April 14, 2022. At least 306 people have been killed as rains wreaked havoc on Durban and surrounding region destroying homes and infrastructure. (Photo: Shiraaz Mohamed.)

In my five decades, I’ve seen a number of natural and human-made disasters, but none compare to the death and destruction witnessed this past week, starting Friday 8 April.

During the week in which the floods started, all our eyes were focused on the eThekwini ANC elective regional conference, which was going to have huge ramifications for the ruling party in the buildup to the party’s  national elective conference, at which new leaderships will be elected.

The heavy rains started on Friday, mid-morning, just as we were going to fetch media accreditation for the conference. We underestimated these rains, thinking they were run-of-the-mill and would fizzle out in a few hours or so.

But the heavy rains persisted throughout the afternoon and into the evening. On Saturday morning we woke up to more of the same, which continued as we went to the conference venue, the Inkosi Albert Luthuli International Convention Centre. The rain continued throughout the day. At midnight, as we left the venue, it was still pounding down. The following day, the same thing.

On Sunday, I got a WhatsApp from my wife – remember I was in the comfort of the conference centre – saying the rains were starting to be torrential and dangerous. I thought she was exaggerating and focused on the tense conference.

On Sunday I returned after midnight, when the result of the conference had been concluded and interviews completed.

Come Monday morning, the torrential rains were so severe my wife made a call not to send our two daughters to school. She later told me she was scared they would be affected. At around midday on Monday, we received messages and notices from the girls’ school, pleading with parents not to send kids if the rains continued.

Later that day, the KwaZulu-Natal Department of Education sent out a circular, warning schools of a disaster; schools had been damaged and teachers and principals were told to send children home early. The department also warned parents to keep children at home until further notice.

Throughout Monday, there was non-stop rain, accompanied by heavy storms. Around 3pm our neighbourhood experienced water cut-offs. A few hours later, there was no power.

On the social media network, pictures and video clips from friends and colleagues began emerging showing falling houses, submerged bridges, sinkholes and sinking vehicles. It was like a scene from a horror movie.

We saw cars floating like boats. The scene that will stay for some time is of shipping containers falling and floating in floodwaters on the N2 freeway near old Durban International Airport near Isipingo.

By now news of deaths began circulating and some colleagues began interviewing victims, some of whom had seen sons, daughters, parents, grandchildren, grandparents and other relatives being swept away by the floods.

I was far from home when my wife called, telling me to return quickly because muddy water had seeped through our house, into the living room, the bedrooms, the bathrooms, the kitchen; all over.

By the time I got home, just over an hour later, she had opened all the doors and removed furniture and other items from the ravaging water. But the house was still looking like a mini swimming pool. Outside, muddy water was knee deep and I could not bring the car into the driveway.

We couldn’t sleep at all on Monday night, worried that our house was on the verge of collapse. The rain was so bad it was now seeping through downlights and the ceiling board was soaking. We tried throughout the night to sweep mud and water out of the house.

On Tuesday morning the rains had not dissipated. The pictures and video clips of ongoing havoc did not stop.

We made frantic calls to ask relatives how they were doing. Some, in Durban and surrounding areas, had no network. Linking roads had been washed away, and bridges. Petrol service stations began running out of fuel and motorists were pleading for information about where they could fill up their tanks. For many of us, our lives were at a standstill.

Families weep for loved ones

As the day progressed, the number of dead people was rising. Families reported missing relatives. Others were pleading for help after their homes had been swept away.

No-one in my extended family or friends have died, but I know of many families who are weeping for loved ones.

A friend had his double-storey house flooded, with two vehicles in the garages. Another had half his garden washed into the neighbour’s yard, exposing the foundations of his house.

By Easter Sunday night, at least 443 people had been declared dead due to the marauding floods. More than 50,000 people had been affected, either by losing family members or having their houses washed away or damaged in a few days of mayhem.

Government officials, from President Cyril Ramaphosa to town councillors and ward committee members, began visiting afflicted communities. They pledged to send help, funds and other assistance as soon as possible.

Many community members said the impact of the floods would not have been as severe if the eThekwini Municipality had been doing its job of installing, cleaning, maintaining stormwater drainage systems, building houses for desperate people in safe areas, and fixing roads and bridges in time.

Furthermore, there was disdain in many quarters that connected elites and corrupt officials would not shy away from embezzling relief funds, as they had personal protection equipment (PPE) funds meant to help South Africans affected by the Covid-19 pandemic.

The full impact of the floods is yet to be quantified in terms of life, loss of homes, income and the economy.

On Sunday our home had not had water since Friday and we were relying on an informal network that included water tankers, friends and water containers for our basic needs. DM