Russia says crippled warship to be towed back to port,...

Russia says crippled warship to be towed back to port, as Ukraine claims missile hit 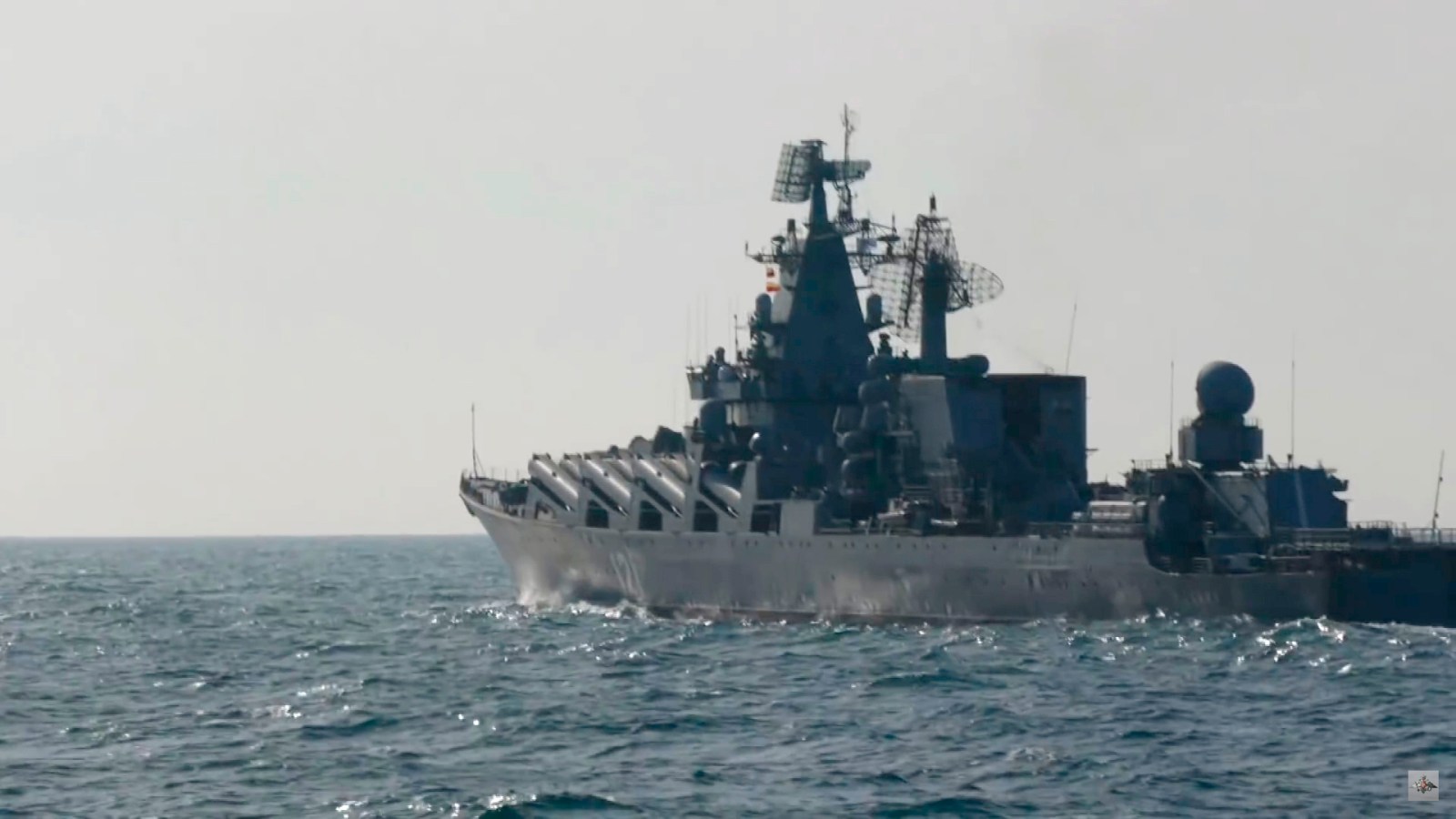 A handout still image taken from a video footage made available 18 February 2022 by the press service of the Russian Defence Ministry shows Russian Navy missile cruiser 'Moskva' participating in exercise in the Black Sea off the coast of Crimea, 18 February 2022. The Black Sea fleet's flagship, the RTS Moskva, was damaged after ammunition on board the vessel caught fire, according to Russian state media citing the Defence Ministry. EPA-EFE/RUSSIAN DEFENCE MINISTRY/HANDOUT MANDATORY CREDIT / BEST QUALITY AVAILABLE HANDOUT EDITORIAL USE ONLY/NO SALES

KYIV/LVIV, Ukraine, April 14 (Reuters) - Russia said the crew of its Black Sea fleet flagship were evacuated on Thursday and measures were being taken to tow the ship back to port after an explosion of ammunition on board that Ukraine said was caused by a missile strike.

Russia’s defence ministry said the fire on the Soviet-era missile cruiser Moskva had been contained, but left the ship badly damaged. It did not acknowledge the ship had been attacked and said the cause of the fire was under investigation.

Ukraine’s southern military command said that it hit the warship with a Ukrainian-made Neptune anti-ship missile and that it had started to sink.

Reuters was unable to verify either side’s statements.

The loss or disabling of the Moskva would be another blow for Russia – on the 50th day of its war in Ukraine – as it readies for a new assault in the eastern Donbas region that is likely to define the outcome of the conflict.

Russia’s navy has launched cruise missiles into Ukraine and its activities in the Black Sea are crucial to supporting land operations in the south of the country, where it is battling to seize full control of the port of Mariupol.

Russian news agencies said the Moskva, commissioned in 1983, was armed with 16 anti-ship Vulkan cruise missiles with a range of at least 700 km (440 miles).

Kyiv says the Moskva featured in one of the landmark early exchanges of the war, when Ukrainian border guards on Snake Island, a small outcrop in the Black Sea, told the ship to “Go fuck yourself” after it demanded they surrender.

Russian forces have pulled back from some northern parts of Ukraine after suffering heavy losses and failing to take the capital Kyiv. Ukraine and its Western allies say Moscow is redeploying for a new offensive.

“Russian forces are increasing their activities on the southern and eastern fronts, attempting to avenge their defeats,” Ukrainian President Volodymyr Zelenskiy said in a Wednesday night video address.

Ukraine’s Deputy Defence Minister Hanna Malyar said in televised comments on Thursday that Russia was massing troops not only along the Russia-Ukraine border, but also in Belarus and Moldova’s breakaway Transdniestria region.

Authorities in Transdniestria, which borders southern Ukraine, have previously denied Russia was preparing forces there to deploy in Ukraine.

The Kharkiv, Donetsk and Zaporizhzhia regions in the country’s east were being hit by missile strikes, Malyar said. Kharkiv’s governor said four civilians had been killed by shelling.

Russia said on Wednesday that more than 1,000 Ukrainian marines from one of the scattered units still holding out in the shattered city had surrendered. Ukrainian officials did not comment.

If it is taken, Mariupol – Ukraine’s main Sea of Azov port that has been besieged and bombarded for weeks – would be the first major city to fall to Russian forces since they invaded on Feb. 24.

Its capture would allow Russia to reinforce a land corridor between separatist-held eastern areas and the Crimea region it seized and annexed in 2014, and free up forces for a wider offensive.

Ukrainian Deputy Prime Minister Iryna Vereshchuk said nine humanitarian corridors had been agreed on for Thursday to evacuate civilians, including by private car, from Mariupol.

Ukraine says tens of thousands of people are believed to have been killed in Mariupol.

Mariupol’s mayor, Vadym Boichenko, said Russia had brought in mobile crematoria “to get rid of evidence of war crimes” – a statement that it was not possible to verify independently.

In the village of Lubianka northwest of Kyiv, from where Russian forces had tried and failed to subdue the capital before retreating, a message to Ukrainians had been written on the wall of a house that had been occupied by Russian troops.

The Kremlin says it launched a “special military operation” to demilitarise and “liberate” Ukraine from nationalist extremists, a message villagers said had been repeated to them by the Russian troops.

A mission of experts set up by Organization for Security and Cooperation and Europe (OSCE) nations said on Wednesday it had found evidence of war crimes and crimes against humanity by Russia in Ukraine.

Russia has denied targeting civilians and said some reports have been staged for propaganda purposes.

Andriy Nyebytov, head of the Kyiv region police, said more than 800 bodies had been found in three districts which had been occupied by Russian forces.

“We are finding terrible things: buried and hidden bodies of people who were tortured and shot, and who died as a result of mortar and artillery fire,” Nyebytov said in televised comments. His statements could not immediately be verified.

Moscow’s incursion, the biggest attack on a European state since 1945, has seen more than 4.6 million people flee abroad, killed or wounded thousands and left Russia increasingly isolated on the world stage.

Western-led sanctions have triggered the worst economic crisis in Russia since the 1991 fall of the Soviet Union, say analysts. More than 600 companies, including McDonalds, have announced their withdrawal from Russia, which will directly cause the loss of about 1 million jobs.

The conflict has also galvanised NATO and prompted Russia’s neighbours Sweden and Finland to discuss joining the Western military alliance.

Dmitry Medvedev, deputy chairman of Russia’s Security Council and one of President Vladimir Putin’s closest allies, warned on Thursday that such a move would force Russia to bolster its defences in the Baltic region, including by deploying nuclear weapons.

By Pavel Polityuk and Oleksandr Kozhukhar.