Innovation and community is at the heart of a new exhib... 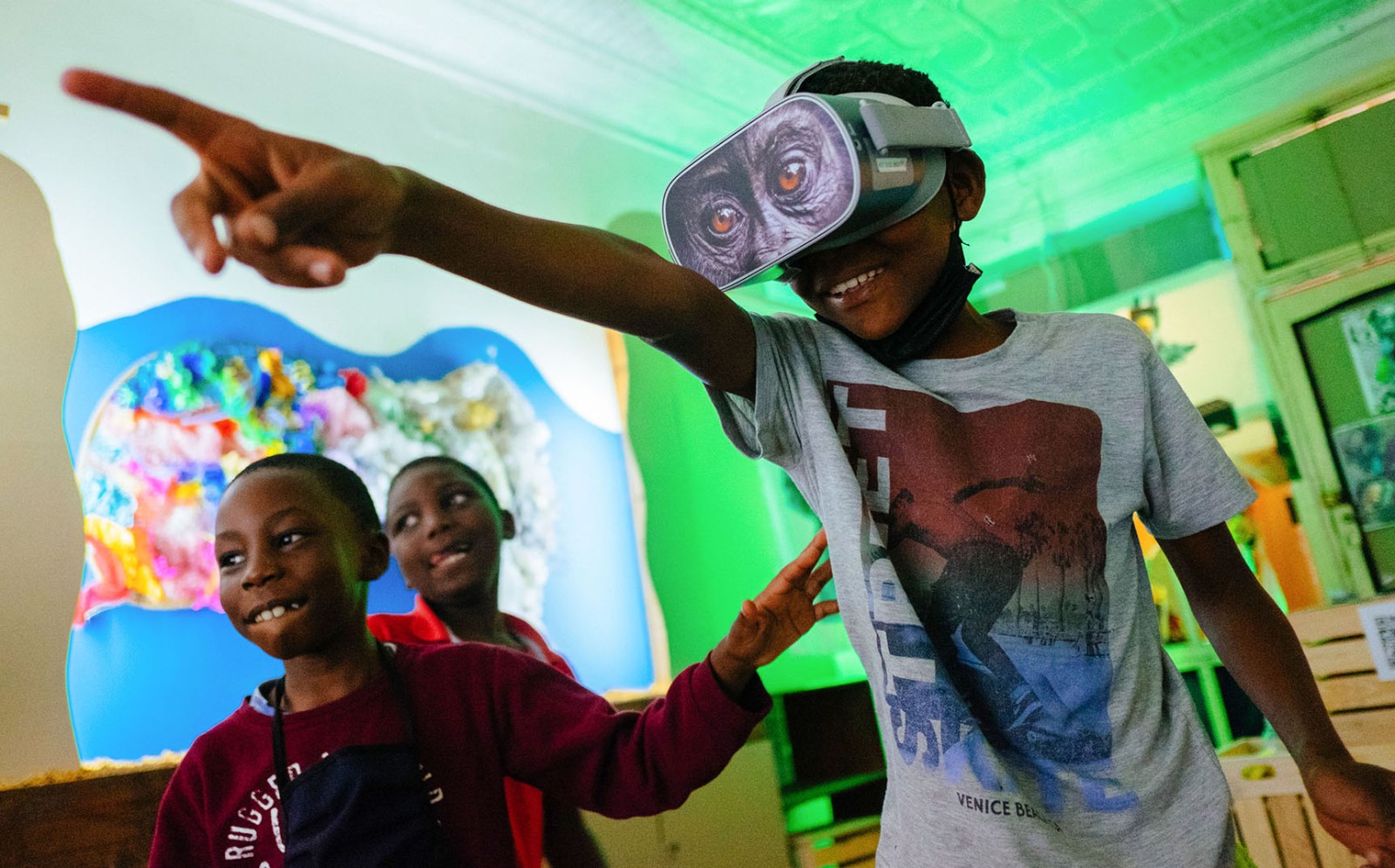 Visitors at the Waste Not Want Not exhibition opening were able to view a three-dimensional digital artwork through virtual reality goggles. (Photo: James Puttick)

In the hands of the artists collaborating on an exhibition centred on waste and reclaimed materials, it’s a Lazarus moment affording us a fresh look at consumption, consumerism and community.

The Waste Not Want Not exhibition at Shade Gallery in Brixton has been two years in the making. It’s billed as “an intersection between artists, youth and the peripheral purveyors who have been silently salvaging our society — the bagerezi”.

That intersection comes at the hand of visual artist and owner of Shade, Tamzyn Botha (aka Limb). She has drawn a creative thread through the everyday and the city’s seemingly invisible and used art and community to make them seen, and seen differently.

Botha had for years been building up a materials library. It is her collection of things that have been thrown out; things other people have outgrown or stopped regarding as useful and things she could see being resurrected with re-imagining and repurposing.

“I am a hoarder, but I do also think about the crisis of our capped landfills and how easily we buy new things without a second thought, and throw away some things just because we can replace them,” she says.

March 2020 marked a year since moving into the one-time suburban corner café on Caroline Street in the Joburg West suburb. She had transformed the dilapidated 100-year-old building into a gallery and studio space. Then Covid hit and with it came the lockdown and the hunger crisis.

People on the margins who live off what society throws out had even fewer scraps to survive off and fewer places to look for food, as free movement evaporated under Level 5 restrictions.

“Because I have a big bakkie that I use to transport my art, I volunteered with an NGO that was cooking and getting meals and essentials to people, many of whom were waste reclaimers,” she says.

From her interaction with the community and through her artist’s eye, Botha saw discarded treasures in the bagerezis’ bulging bags.

These bags are usually affixed to trolleys and hauled through the city streets. Botha saw an opportunity to create a new market for waste reclaimers selling their salvaged goods to her materials library and to other artists who work with found objects.

“As we started putting the word out, we met more people and we became a network. The reclaimers are amazingly well organised because they are expert sorters who know exactly what can be recycled and what cannot,” she says.

As part of the exhibition, Botha also created a zine that includes a deep dive into the typical prices that recyclables can fetch at buy-back centres. It includes everything from copper, brass and steel to different grades of plastics and paper.

“Prices fluctuate a lot. There are also loads of non-recyclables that cannot be sold to buy-back centres and that’s where the materials library has become a new market,” Botha says.

She can literally put out “orders” too, in this supply chain. It can be as specific as old plastic dolls or X-rays or small appliance motors. Within days someone will arrive with something useful to sell.

At the same time that Botha was getting the Shade Gallery off the ground, she was being noticed by curious neighbourhood children who had few options for recreation in Brixton. And so a free Saturday art programme started organically, says Botha. Today there are about 30 children who attend.

Botha, guest artists and volunteers help drive the programme. Botha has also incorporated the children’s artworks into the Waste Not Want Not exhibition.

“It’s so that they can see what they create through the different lens of an art exhibition,” she says.

Botha’s decision to set up the gallery in Brixton is not without the challenges of a suburb that, for decades, has gone from working and middle class to ignored and falling through the cracks. There are hijacked homes turned to drug dens, dumping and neglect. City councillors do too little and cops look the other way too easily.

Botha’s antidote is to be on the streets even more and to make a community of neighbours push back against the slide into entropy. Over the past two years, she’s spearheaded the annual Brixton Light Festival — a night of carnival, art made from waste and imagination and getting neighbours to reclaim the night.

Her next push is to get the City of Joburg to cut through its red tape and inaction to finally agree to Shade’s proposal to have the old Brixton recreation centre opened up so her arts programme and other community-driven initiatives that have been sparked through Shade can have more space and structure. It’s sorely needed in a neighbourhood that could do with more TLC, she says.

Mpho Makutu an artist who collaborated on the exhibition through a sponsored residency which Botha secured through the Goethe Institute and the British Council. Makutu, who also collaborates with the Wits Tshimologong Digital Innovation Project in Braamfontein, focuses mostly on robotics. For the exhibition, he used salvaged materials to build motorised installations. There are windmills and an ode to the reclaimers among his pieces on exhibit.

“I grew up making robots from trash so I want these models in the exhibition to empower and motivate young people to see trash as treasure, not just as something that ends up on the streets.

“People always say they don’t have the proper materials or tools, but this exhibition shows that you can build with what you can find. I believe that bringing art and robotics together is a way to water young people’s skills so that they grow,” says Makutu.

Francois Knoetze, a Cape Town-based performance artist, filmmaker and sculptor, also took up residency at Shade. His work in the exhibition includes costumes he made for a performance piece as well as a VR film that centres on Brixton, bagarezi and the strangeness of whimsy set among the familiarity of a suburban Jozi hood.

“I’ve worked in different spaces in the art world over the last 10 years and I’m just so impressed with how Shade is a space for learning, experimentation and the community.

“I was amazed at the materials library that Tamzyn has created, so I knew I wanted to archive that in some way.

“The act of picking up something that was thrown away and then putting it back on the street opens up for people to interact with the performer, for people maybe to see things differently and to have different conversations. Something happens then; I think it’s magical,” he says.

And there is magic in the Shade — not just as things return from the dustbins of society, but in the moment society is invited to pause long enough to see waste as something they may want to hold on to for a little longer still. DM/MC

Waste Not Want Not is on until 24 April, Wednesdays to Sundays, at Shade Gallery, 166 Caroline Street, Brixton.