Secrets in the genes – how ancient DNA sheds light on social changes in Africa 50,000 years ago 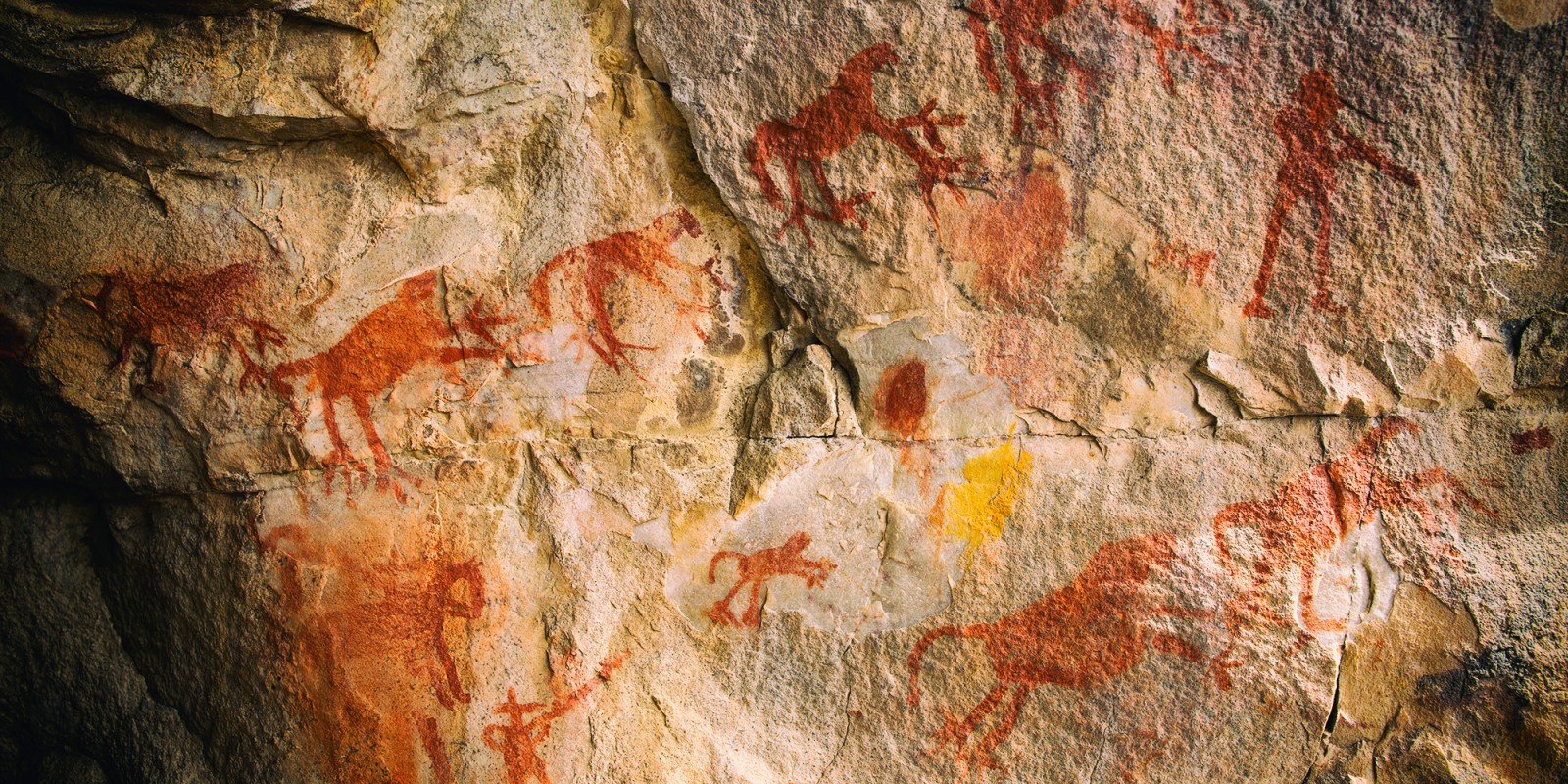 Together with artefacts from the past, ancient DNA can fill in details about our ancient ancestors. (Photo: EPA / Nic Bothma)

It’s hard to study ancient demography from the archaeological record alone. This is where DNA can help. Now, genetic evidence supports a major demographic transition in Africa after 50,000 years ago.

Every person alive on the planet today is descended from people who lived as hunter-gatherers in Africa.

The continent is the cradle of human origins and ingenuity, and with each new fossil and archaeological discovery, we learn more about our shared African past. Such research tends to focus on when our species, Homo sapiens, spread out to other landmasses 80,000 to 60,000 years ago. But what happened in Africa after that, and why don’t we know more about the people who remained?

Our new study, conducted by an interdisciplinary team of 44 researchers based in 12 countries, helps to answer these questions. By sequencing and analysing ancient DNA (aDNA) from people who lived as long ago as 18,000 years, we roughly doubled the age of sequenced aDNA from sub-Saharan Africa. And this genetic information helps anthropologists like us to understand more about how modern humans were moving and mingling in Africa long ago.

Tracing our human past in Africa

Beginning about 300,000 years ago, people in Africa who looked like us – the earliest anatomically modern humans – also started behaving in ways that seem very human. They made new kinds of stone tools and began transporting raw materials up to 400km, likely through trade networks. By 140,000 to 120,000 years ago, people made clothing from animal skins and began to decorate themselves with pierced marine shell beads.

While early innovations appeared in a patchwork fashion, a more widespread shift happened about 50,000 years ago – around the same time that people started moving into places as distant as Australia. New types of stone and bone tools became common, and people began fashioning and exchanging ostrich eggshell beads. And while most rock art in Africa is undated and badly weathered, an increase in ochre pigment at archaeological sites hints at an explosion of art.

What caused this shift, known as the Later Stone Age transition, has been a longstanding archaeological mystery. Why would certain tools and behaviours, which up until that point had appeared in a piecemeal way across Africa, suddenly become widespread? Did it have something to do with changes in the number of people, or how they interacted?

The challenge of accessing the deep past

Archaeologists reconstruct human behaviour in the past mainly through things people left behind – remains of their meals, tools, ornaments and sometimes even their bodies. These records may accumulate over thousands of years, creating views of daily livelihoods that are really averages over long periods. However, it’s hard to study ancient demography, or how populations changed, from the archaeological record alone.

This is where DNA can help. When combined with evidence from archaeology, linguistics and oral and written history, scientists can piece together how people moved and interacted based on which groups share genetic similarities.

But DNA from living people can’t tell the whole story. African populations have been transformed over the past 5,000 years by the spread of herding and farming, the development of cities, ancient pandemics and the ravages of colonialism and slavery. These processes caused some lineages to vanish and brought others together, forming new populations.

Using present-day DNA to reconstruct ancient genetic landscapes is like reading a letter that was left out in the rain: some words are there but blurred, and some are gone completely. Researchers need ancient DNA from archaeological human remains to explore human diversity in different places and times and to understand what factors shaped it.

Unfortunately, aDNA from Africa is particularly hard to recover because the continent straddles the equator, and heat and humidity degrade DNA. While the oldest aDNA from Eurasia is roughly 400,000 years old, all sequences from sub-Saharan Africa to date have been younger than about 9,000 years.

Because each person carries genetic legacies inherited from generations of their ancestors, our team was able to use DNA from individuals who lived between 18,000 and 400 years ago to explore how people interacted as far back as the past 80,000 to 50,000 years. This allowed us, for the first time, to test whether demographic change played a role in the Later Stone Age transition.

Our team sequenced aDNA from six individuals buried in what are now Tanzania, Malawi and Zambia. We compared these sequences to previously studied aDNA from 28 individuals buried at sites stretching from Cameroon to Ethiopia and down to South Africa. We also generated new and improved DNA data for 15 of these people, trying to extract as much information as possible from the small handful of ancient African individuals whose DNA is preserved well enough to study.

This created the largest genetic dataset so far for studying the population history of ancient African foragers – people who hunted, gathered or fished. We used it to explore population structures that existed prior to the sweeping changes of the past few thousand years.

DNA weighs in on a longstanding debate

We found that people did in fact change how they moved and interacted around the Later Stone Age transition.

Despite being separated by thousands of kilometres and years, all the ancient individuals in this study were descended from the same three populations related to ancient and present-day eastern, southern and central Africans. The presence of eastern African ancestry as far south as Zambia, and southern African ancestry as far north as Kenya, indicates that people were moving long distances and having children with people located far from where they were born. The only way this population structure could have emerged is if people were moving long distances over many millennia.

Additionally, our research showed that almost all ancient eastern Africans shared an unexpectedly high number of genetic variations with hunter-gatherers who today live in central African rainforests, making ancient eastern Africa truly a genetic melting pot. We could tell that this mixing and moving happened after about 50,000 years ago, when there was a major split in central African forager populations.

We also noted that the individuals in our study were genetically most like only their closest geographic neighbours. This tells us that, after around 20,000 years ago, the foragers in some African regions were almost exclusively finding their partners locally. This practice must have been extremely strong and persisted for a very long time, as our results show that some groups remained genetically independent of their neighbours over several thousand years. It was especially clear in Malawi and Zambia, where the only close relationships we detected were between people buried around the same time at the same sites.

We don’t know why people began “living locally” again. Changing environments as the last Ice Age peaked and waned between about 26,000 and 11,500 years ago may have made it more economical to forage closer to home, or perhaps elaborate exchange networks reduced the need for people to travel with objects.

Alternatively, new group identities may have emerged, restructuring marriage rules. If so, we would expect to see artefacts and other traditions like rock art diversify, with specific types clumped into different regions. Indeed, this is exactly what archaeologists find – a trend known as regionalisation. Now we know that this phenomenon not only affected cultural traditions, but also the flow of genes.

As always, aDNA research raises as many questions as answers. Finding central African ancestry throughout eastern and southern Africa prompts anthropologists to reconsider how interconnected these regions were in the distant past. This is important because central Africa has remained archaeologically understudied, in part because of political, economic and logistical challenges that make research there difficult.

Additionally, while genetic evidence supports a major demographic transition in Africa after 50,000 years ago, we still don’t know the key drivers. Determining what triggered the Later Stone Age transition will require closer examination of regional environmental, archaeological and genetic records to understand how this process unfolded across sub-Saharan Africa.

Finally, this study is a stark reminder that researchers still have much to learn from ancient individuals and artefacts held in African museums, and highlights the critical role of the curators who steward these collections. While some human remains in this study were recovered within the past decade, others have been in museums for half a century.

Even though technological advances are pushing back the time limits for aDNA, it is important to remember that scientists have only just begun to understand human diversity in Africa, past and present. DM168