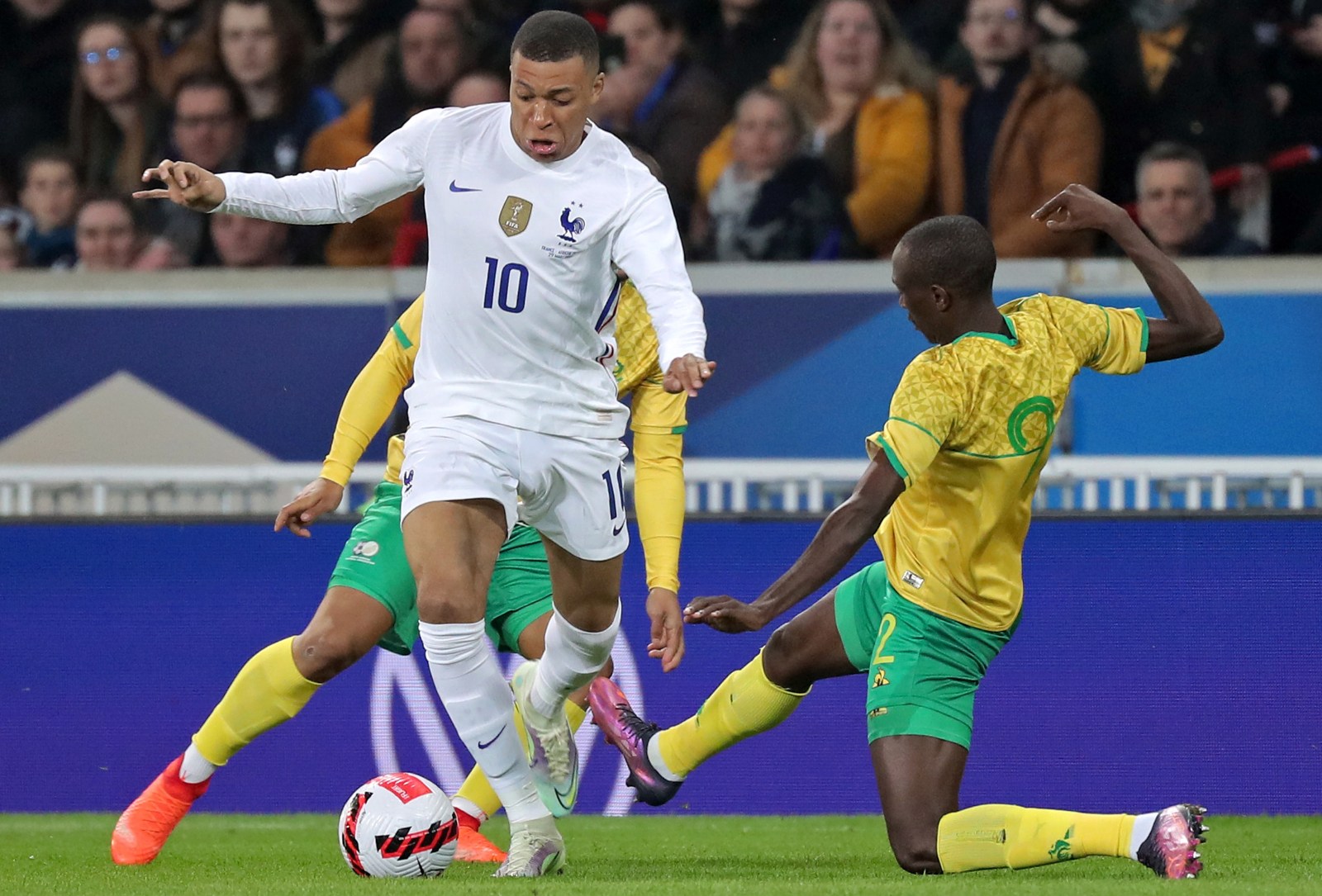 One-time African champs are far off from being a force in African football, never mind the world.

South Africa’s national men’s football side played their first set of fixtures since their disappointing and controversial defeat to Qatar-bound Ghana in the Fifa World Cup qualifiers back in November 2021.

Hugo Broos’s men clashed with fellow Africans Guinea, as well as reigning world champions France during the recent international window. They recorded a nil-all draw against the former, before being thumped 5-0 by the latter. The results have shown Broos, who is less than a year into the Bafana Bafana job, that his team is miles away from being a competitive force in African football, and even further away in the global context.

Stirred, but not shaken

The task ahead for Broos was laid bare when Frenchmen Kylian Mbappé toyed with the South Africans as his nation thumped the visiting South Africans in Lille.

As Mbappé glided through the South African defence with the grace of a ballerina and the precision of a sniper time and again, the South Africans were left chasing shadows. It was a sobering test for the Bafana defensive wall, which has been one of the positives since Belgian Broos took over from Molefi Ntseki in May 2021.

During the World Cup qualifiers Bafana were one of just four teams to concede two goals or fewer in Africa. Against France, that solidity was put to the ultimate test as they were bamboozled time and again. That goalkeeper Ronwen Williams was lauded for making 11 total saves on the night – despite conceding five – demonstrates the type of pressure the South Africans came under.

Broos, though, says he and his charges were not delusional about the potential outcome of the game, considering that the 69-year-old is still in search of his best 11 since assuming the Bafana Bafana hotseat.

“We knew coming into this game what we were coming up against. There was a difference of level between the two teams. For us it wasn’t about the result, it was about the experience we have gained here today,” Broos stated.

“We are a young team. Therefore, we don’t have the experience and quality of the French team. We tried our best today but the talent of our opposition was just too much, so we are not embarrassed by this scoreline.”

The destructive Mbappé not only exposed Bafana’s problems on the field, but problems in the wider community of South African football. At 23, the Paris Saint-Germain forward has played more than 150 senior games for club and country.

“He’s a great player and there are much better defenders who suffered against him, you can’t really neutralise him. He is always quick, he is technically very good, he can score. So, if you have such a player in your team, you play with 12. France is already so good and they play with 12 against us. So, you know how difficult it was for us,” Broos said of Mbappé’s quality.

By contrast, someone like Egypt-based Fagrie Lakay, who made his debut for Bafana Bafana back in 2014 as a fresh-faced 17-year-old, was lost to the system for years, as opposed to being nurtured. Though his career was also hampered by constant injuries.

As a result, when he should be one of the more internationally experienced players in Broos’s team, the 24-year-old has less than 10 national team caps since becoming the youngest player to don the Bafana Bafana shirt six years ago.

In fact, barring the then promising Percy Tau – whose career was set back by his failure to break through at Brighton & Hove Albion in the English Premier League – South Africa has not been able to produce the type of talisman Mbappé is for France for more than two decades.

It is no secret that in difficult situations, individual brilliance can win matches. At some point the South Africans boasted a plethora of individual quality with the likes of Benni McCarthy, Sibusiso Zuma, Doctor Khumalo and Lucas Radebe to call upon. Since their respective retirements, that type of leadership has been scarce.

Whereas Bafana Bafana’s drubbing at the hands of France exposed myriad issues for Broos and his technical team to fix before they begin their qualification push for the 2023 Africa Cup of Nations in June, their match against Guinea exposed their lack in quality finishing.

Broos’s men had a total of 19 shots on goal, almost four times more than their opponents. Of those, less than half were on target as the team just could not find the back of the net, despite poking numerous holes in the Guinea defence.

“It is difficult to fix the scoring; it is up to the players. You just can give them confidence and not talk too much about that [poor finishing] because otherwise it will be in their heads that ‘oh, we did not score, we did not score’. I mentioned it certainly in the after-match meeting, but that’s all. But the players know it too, that with the chances we had, we should have scored,” said Broos after the Guinea game.

Of course, when the last South African striker to score 20 goals in a single Premiership campaign was a 34-year-old Siyabonga Nomvethe 10 years ago, it highlights a massive lack in quality from the domestic league. If the players are not scoring for their clubs, they can’t be expected to suddenly be goal machines at national level.

“At the moment, if you check our South African strikers, I mean, it’s embarrassing. The guys are struggling to get into double figures,” former Bafana forward Katlego Mphela told KickOff after the Guinea game.

“The issue of our strikers in the country is something I think we need to take a serious look at. Our striker crisis is something that has been going on for too long. It has been a problem for a long time now, even with us when we were playing it was a problem.”

Mphela, who turned out for the likes of Kaizer Chiefs and Mamelodi Sundowns during his playing days, hinted that the players should motivate themselves to reach or even surpass the likes of McCarthy.

He cited Baroka’s Evidence Makgopa as an example of a young forward with bucket-loads of potential who needs to dig deeper in order to fulfill his potential. The 21-year-old was a vital cog in David Notoane’s under-23 team, but has struggled since making the leap to the senior side.

“At the moment, no one is able to hit the 20-goal mark. The likes of [Evidence] Makgopa have the potential, but that drive needs to come from within. He needs to decide which level he wants to reach, whether he just wants to go to Bafana Bafana to make up the numbers or if he’s looking at Benni McCarthy’s record,” mused Mphela. DM168