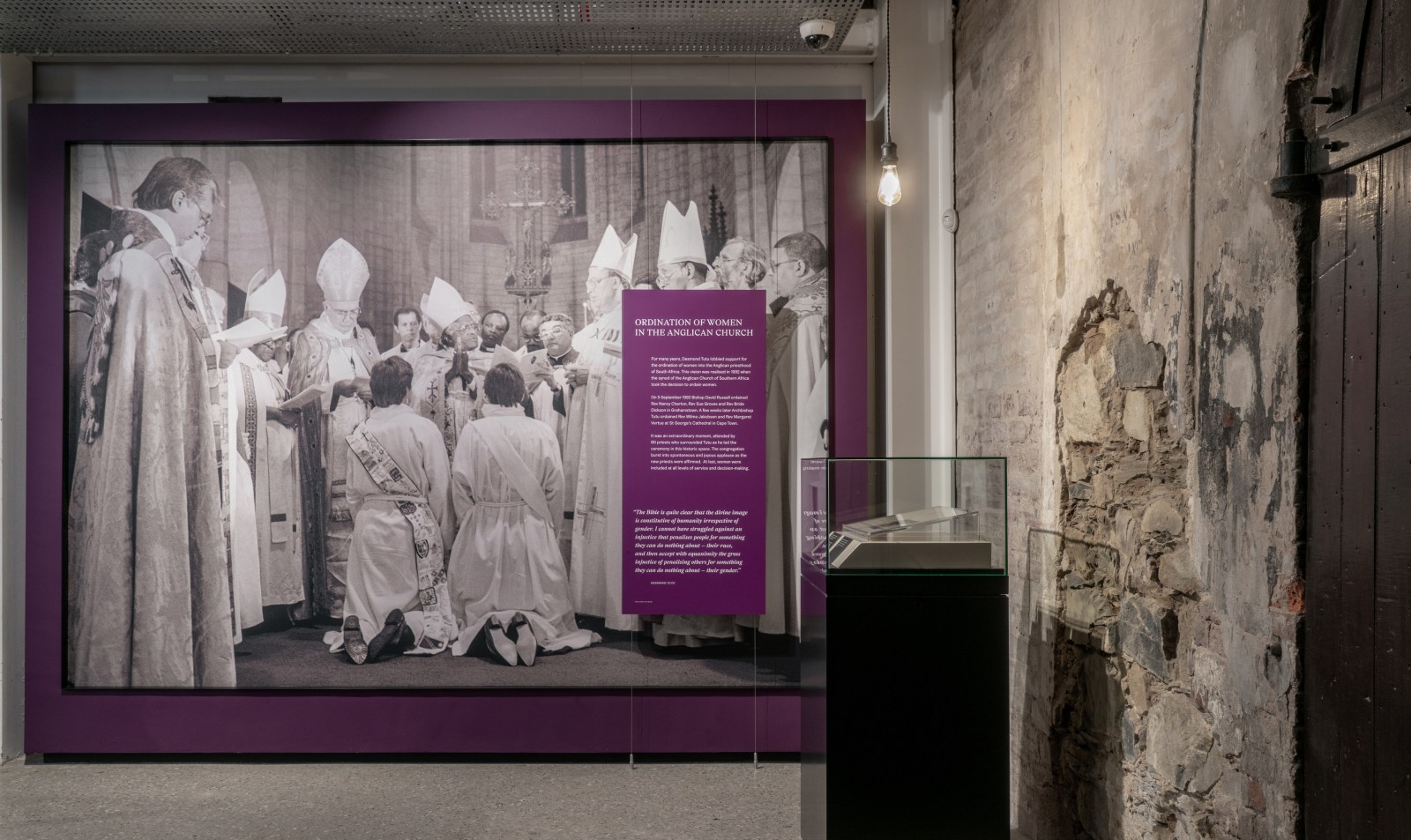 The new permanent exhibition at the Desmond & Leah Tutu Legacy Foundation, titled ‘Truth To Power: Desmond Tutu and the Churches in the Struggle Against Apartheid’, includes a section on the ordination of women into the Anglican Church. Image: David Ross

Beyond advocating the liberation of black South Africans and an end to the apartheid regime, Archbishop Desmond Tutu was known for his willingness to stand up for the rights of other oppressed groups – including, notably, women. We take a closer look at a photo of the first women’s ordination service in the Diocese of Cape Town, presided over by the Arch.

The new exhibition at the Old Granary building in Cape Town, titled Truth To Power: Desmond Tutu and the Churches in the Struggle Against Apartheid, will provide the opportunity to examine many photographs from the life of Archbishop Desmond Tutu. Among these is a photo of the first women’s ordination service in the Diocese of Cape Town, enlarged and framed by the Arch’s iconic purple.

The photograph, taken on 29 September 1992 by Eric Miller, captures a historic moment in the history of both South Africa and the Anglican Church. It shows Tutu, palms pressed together, leading the ceremony to ordain Reverend Wilma Jakobsen and Reverend Margaret Vertue as priests. The event took place at St George’s Cathedral in Cape Town and was attended by about 80 priests, according to the exhibition display.

Jakobsen and Vertue were among the first five women to be ordained as priests in the Anglican Church of Southern Africa – an entity that includes Lesotho, Eswatini, Mozambique and Namibia. The first three were ordained in Grahamstown on 5 September 1992, according to the exhibition display. A few weeks later, Jakobsen and Vertue became the first two women ordained by Tutu in the region.

The event held significance within the context of the church, Jakobsen told Maverick Life, as at the time, Anglican bodies in England and Australia were still debating whether to allow women to be ordained. The Anglican Church of Southern Africa was the first among these to accept women as priests.

In 2017, the 25th anniversary of the ordination of women into priesthood, the Anglican Church of Southern Africa described the decision as a “major transformational turning point for the church for its ministry, especially towards becoming a more representative and inclusive entity that would welcome and embrace diversity”.

When the resolution allowing women into the priesthood was passed, there were already a number of women in South Africa who had been ordained as deacons, without the hope of being ordained as priests, according to the church.

Jakobsen herself was the first woman to be ordained as a deacon by Tutu. The ceremony took place in 1988, four years before she attained priesthood. Her male counterparts, meanwhile, were usually ordained as priests within a year of becoming a deacon, most after only six months.

Within the broader South African context, the ordination ceremony at St George’s Cathedral was an amazing moment, said Jakobsen. The year 1992 fell in between Nelson Mandela’s release and democratisation in the country.

“It was that time when life in South Africa was fragile… it was like a roller coaster,” said Jakobsen, adding that the negotiations at the Convention for a Democratic South Africa and the turmoil surrounding them left people in a state of political uncertainty, unable to find themselves “together as South Africans”.

“He had a number of goals, like large goals, for his [time as archbishop]… and this was one of the things he wanted to have to happen,” said Jakobsen. “Obviously, end of apartheid was one, but he wanted women priests to be ordained as part of his legacy.”

In a United Press International article from 10 October 1986, “Tutu splits from church policy on women”, he is quoted as saying: “As a victim of injustice myself, I experience fully well how women feel.”

Every three years, representatives of the Anglican Church of Southern Africa come together at a synod to pass resolutions. One of the resolutions voted on at the 1989 synod was whether to ordain women, according to Jakobsen.

“Everyone hoped it would go through, but because it’s a controversial resolution, it wasn’t a simple majority decision – it had to be passed with over two-thirds majority. So, getting… two-thirds is surprisingly difficult,” she said.

In the end, the resolution failed to pass, falling short of a two-thirds majority by only 13 votes. “It was like that was worse. If it had gotten… 60% or 61%, honestly, we would have just said, ‘Yeah, you know, we’ll just keep on [trying] and next year it’ll happen.’ So, to lose by 13 votes is horrible.”

While Jakobsen was not present at the synod, she was told later that the Arch – who had been optimistic about the success of the resolution – wept upon hearing the outcome.

“[Tutu] was very upset,” she said. “So, then what he said was, he was going to do what he could to keep it alive. You can bury something for three years or you can keep it alive. He very much kept it alive.”

While Jakobsen flew around the country and spoke to gatherings of laypeople and clergy about the ordination of women, Tutu called on every religious community around the world that he knew – many of whom were already praying for an end to apartheid on his behalf – to pray for the passing of the resolution.

At the 1992 synod, the resolution passed with an overwhelming 79.2% majority. Having been present at this gathering, Jakobsen described it as the “most phenomenal experience of the universe aligning”. Even some of those who came to the synod with speeches against the resolution changed their minds on the floor while listening to the arguments and theology for the inclusion of women.

Later in the day, Tutu found Jakobsen and embraced her. “He just hugged me, like four times, he just hugged me and… said, ‘I’m going to ordain you’, and it was just an amazing… moment.”

The first women’s ordination service in the Diocese of Cape Town took place on one of the Church’s feast days – the Feast of St Michael and All Angels, according to Jakobsen. St Michael is known as the defender of good and the fighter of evil.

There were not only Anglican priests in attendance, but also Roman Catholics, Congregationalists and Methodists. It was an event that brought together people from a broad range of backgrounds.

“It was such a beautiful service. It was both solemn and joyful, all at the same time,” said Jakobsen.

She added that while getting rid of patriarchy goes beyond the inclusion of women in the priesthood, those first ordinations allowed for others to believe that becoming a woman priest was possible.

“So, a little girl sits in church and sees a woman priest. And, you know, when she’s a teenager goes, ‘Ah, maybe I could do that one day’, which has never happened before because the priests were always men,” said Jakobsen.

In a letter celebrating the 25th anniversary of the ordination of women, Tutu said that the clergy had been significantly enriched by opening its doors to a wider pool of talent.