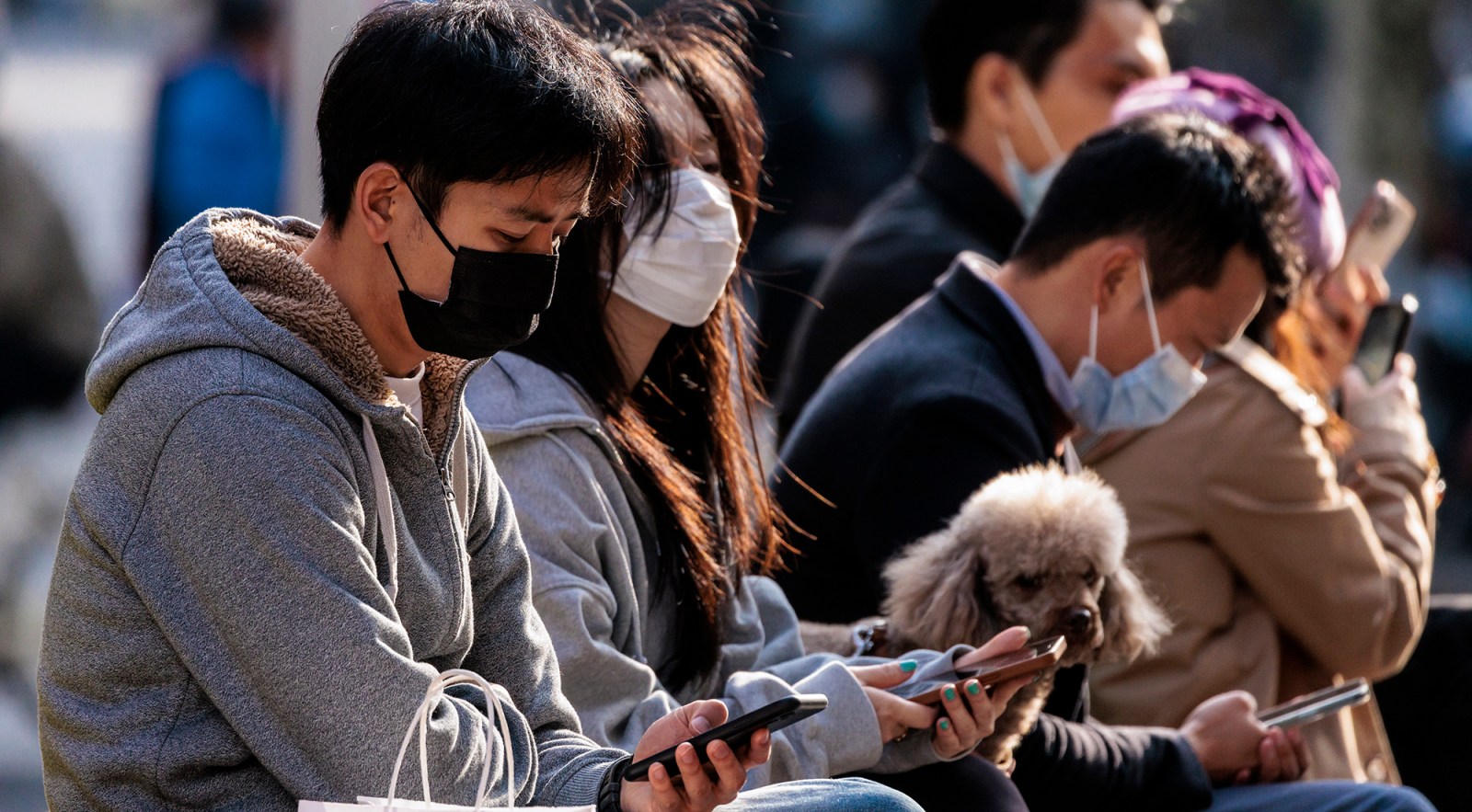 People in Shanghai, China, on 23 March 2022. Shanghai’s government dismissed online rumours that it will impose a city-wide lockdown on the financial capital for one week while mandating further tests for residents in some areas on Wednesday and Thursday. (Photo: EPA-EFE / ALEX PLAVEVSKI)

China is in lockdown to stamp out a rise in Covid-19 cases. The nation is pushing to build more than 60 makeshift hospitals across its provinces.

A full temporary lockdown was put in place on Tangshan City, a steel hub in China’s northern Hebei province, according to local authorities. The restrictions started on March 22 with residents not allowed to leave their buildings until further notice. Shanghai’s government dismissed online rumours that it will impose a city-wide lockdown on the financial capital for one week while mandating further tests for residents in some areas on Wednesday and Thursday.

Malaysia and Singapore’s health ministers agreed that the pandemic situation in both countries had stabilised, Malaysian Health Minister Khairy Jamaluddin wrote on Twitter on Wednesday. The ministers agreed to work immediately toward the full resumption of air and land travel for the fully vaccinated. Malaysia will reopen its borders to international tourists on April 1, while Singapore is aiming to allow anyone who is fully inoculated to enter the country. 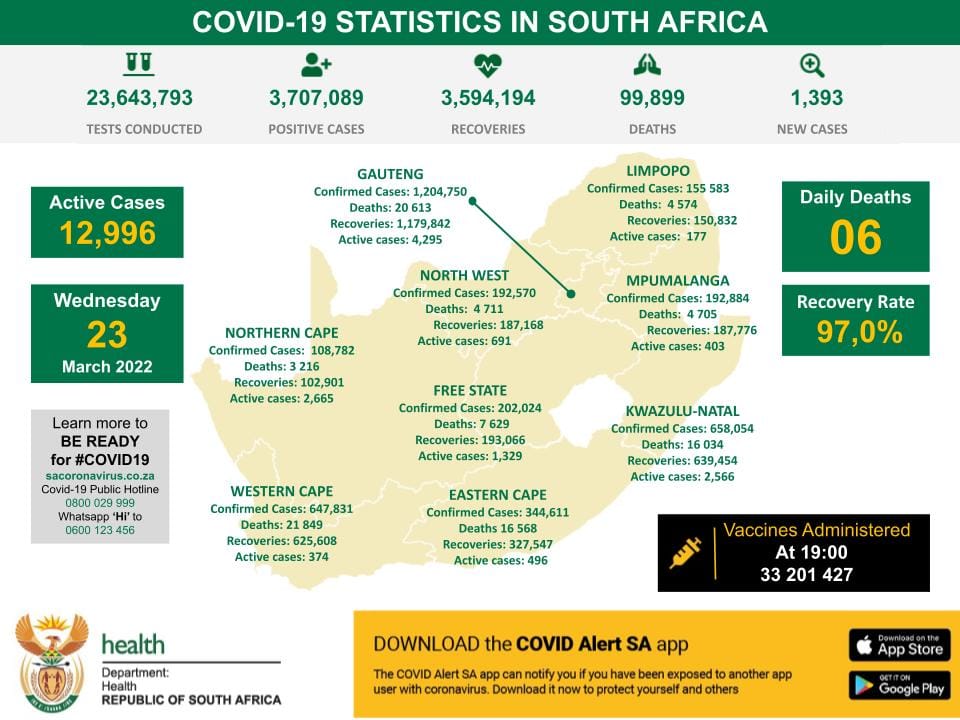 New Zealand will begin to phase out its remaining restrictions as an Omicron outbreak shows signs of having peaked.

From midnight on Friday, outdoor gathering limits will be lifted and indoor limits raised to 200 from 100, and people won’t need to scan QR codes when they enter premises. Vaccine passes will no longer be required to enter hospitality and other venues from April 4.

A third of European nations, including Germany, France and the UK, are seeing a surge in Covid-19 cases after “brutally” easing restrictions, the World Health Organization’s regional head said.

“The countries where we see in particular an increase are the United Kingdom, Ireland, Greece, Cyprus, France, Italy and Germany,” Hans Kluge, the WHO’s director for Europe, said at a briefing in Moldova on Tuesday. “Those countries are lifting restrictions brutally from too much to too few.”

Europe is trying to leave Covid-19 behind, but the rush to unwind restrictions is now setting the stage for a revival of pandemic risks. Newly confirmed cases climbed to 5.4 million in the past seven days, up from 4.9 million at the end of February, according to WHO data. More than 12,400 people died from Covid in the past week, according to the WHO.

Pakistan has reported no deaths from the coronavirus for the first time in almost two years, according to a Twitter post by its National Command and Operation Centre.

The South Asian nation last week removed all coronavirus-linked restrictions. It has vaccinated about half of its population.

The resumption of quarantine-free travel with mainland China remains “a top priority”, but there’s no timetable for the reopening, Lam said. The city will resume discussions with the mainland on reopening once conditions permit.

Hong Kong will resume full-day, in-person classes if 90% of students and all school staff receives two doses of vaccination, Secretary for Education Kevin Yeung said at the briefing.

The northeastern province Jilin, which has been put under lockdown, reported some 2,800 cases. Infections in Shanghai rose to almost 1,000 after testing was expanded. Cases appear to be declining in Shenzhen, which ended a week-long lockdown earlier this week.

The flare-up, fuelled by the highly infectious Omicron variant, has been spotted in 28 out of 31 provinces on the Chinese mainland. The country has also seen a steady rise in severe Covid cases, though the overall number remains small, at 50 as of Wednesday.

The government issued notices for 10 premises on Tuesday, the first since the programme was put on hold in late February as surging cases overwhelmed the city’s testing and tracking capacity. Health officials said they’ll initially target high-risk buildings where many infections are found, like residential premises.

Hong Kong mulls over the reopening of elementary schools

Elementary schools have been limited to half-day face-to-face instructions for nearly two years. The Education Bureau plans to raise the vaccination threshold for resuming secondary school full-day face-to-face classes to 90% from 70% for both teachers and students.

Each of China’s provinces should set up at least two to three makeshift hospitals to treat infections amid Omicron’s explosive spread in the country, according to the country’s National Health Commission.

The nation updated its Covid treatment guidelines last week to reserve designated hospitals for those with severe conditions, while patients with mild symptoms should be sent to isolation facilities to avoid overwhelming the medical system.

A total of 33 makeshift hospitals have been built, or are currently under construction, to provide 35,000 beds, Jiao Yahui, an official with the National Health Commission, said at a briefing. Some 31 local governments are required to come up with plans to ensure the hospitals can be put into use within two days when needed.

Shanghai government denied online rumours that it will lock down the financial capital for one week, Chinese media cited local authorities as saying on Tuesday night. The local authority urged residents not to hoard food and daily necessities.

The megacity of 25 million people has seen sharp increases in Covid cases over the past few days. It reported 896 Covid-19 cases on Monday, a record for a second straight day. Authorities have expanded testing to more residents to root out silent transmission chains. The city last week ruled out imposing a broad lockdown, but officials said on Monday that some areas will remain locked down for further testing. Li Qiang, the Communist Party secretary of Shanghai, urged increased testing in a visit to some neighbourhoods under lockdown on Tuesday.

The authority announced on Tuesday evening it will halt some subway services at a few stations on a couple of lines starting today. Meanwhile, the State Council, China’s Cabinet, has dispatched task forces to 10 provinces and municipalities including Shanghai to help oversee Covid control.

Thailand is heading for a rare back-to-back current account deficit as the outlook for tourist arrivals becomes less rosy with a flare-up in Covid cases globally and energy import bills ballooning amid soaring oil prices.

The net oil importer may post a shortfall of $4.6-billion this year, according to the Bank of Ayudhya, which previously estimated a surplus of $5.8-billion in the current account – the broadest measure of trade and investment.

Hillary Clinton tested positive for Covid-19 and has some mild cold symptoms but is feeling fine, she says in a tweet late on Tuesday.

Hong Kong’s new policies to ease quarantine rules and roll back physical-distancing measures fail to address major concerns of the local and international business communities and threaten its standing as a financial hub, according to commerce groups.

Chief Executive Carrie Lam on Monday said Hong Kong would end a ban on travel from nine countries, including the US, UK and Australia, on April 1 and halve required hotel quarantine to seven days. She also announced a path to lifting physical-distancing measures, with the moves coming after financial institutions and the city’s residents expressed frustration at its isolation. DM/MC

– With assistance from Dong Lyu.