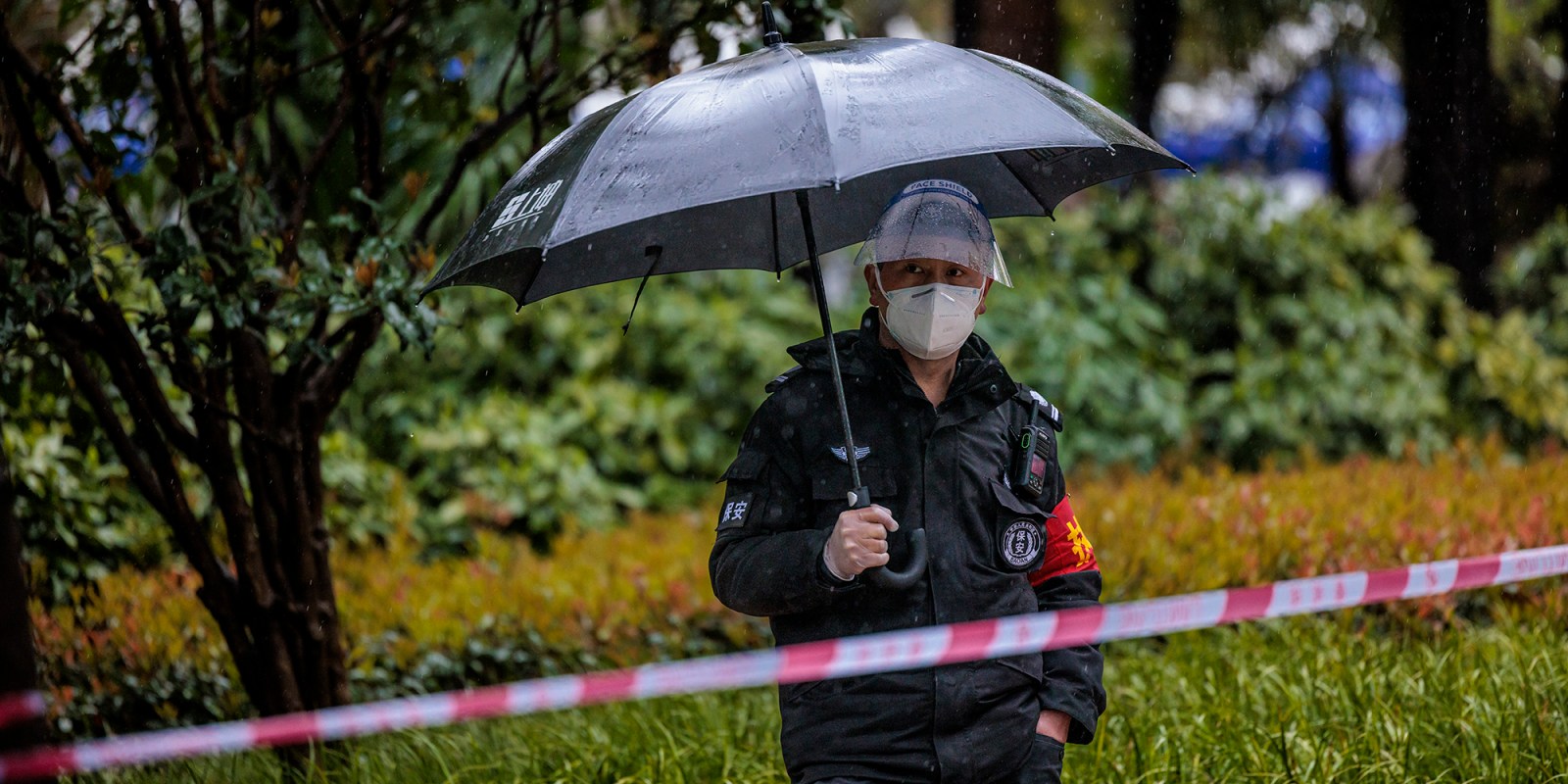 A security guard at the entrance to a Covid-19 testing site in a public park in Shanghai, China, on 21 March 2022. (Photo: EPA-EFE / ALEX PLAVEVSKI)

China should stick to its strict Covid-zero strategy, the country’s top virus expert said, after Hong Kong set out a road map for easing its most stringent curbs.

The comments from Liang Wannian, a seasoned epidemiologist who has overseen China’s response since the beginning of the pandemic, come as officials seek to navigate a path that limits disruptions to the world’s second-biggest economy – a target outlined by President Xi Jinping last week – while getting its biggest outbreak in two years under control.

At a briefing with reporters in Beijing on Tuesday, officials from China’s National Health Commission said the country would narrow the scope of mass testing and aim to complete testing within 24 hours to limit disruptions and more swiftly stem the spread of Omicron. The nation will also require all Chinese provinces to set up at least two or three makeshift hospitals which can be activated within two days during an outbreak. 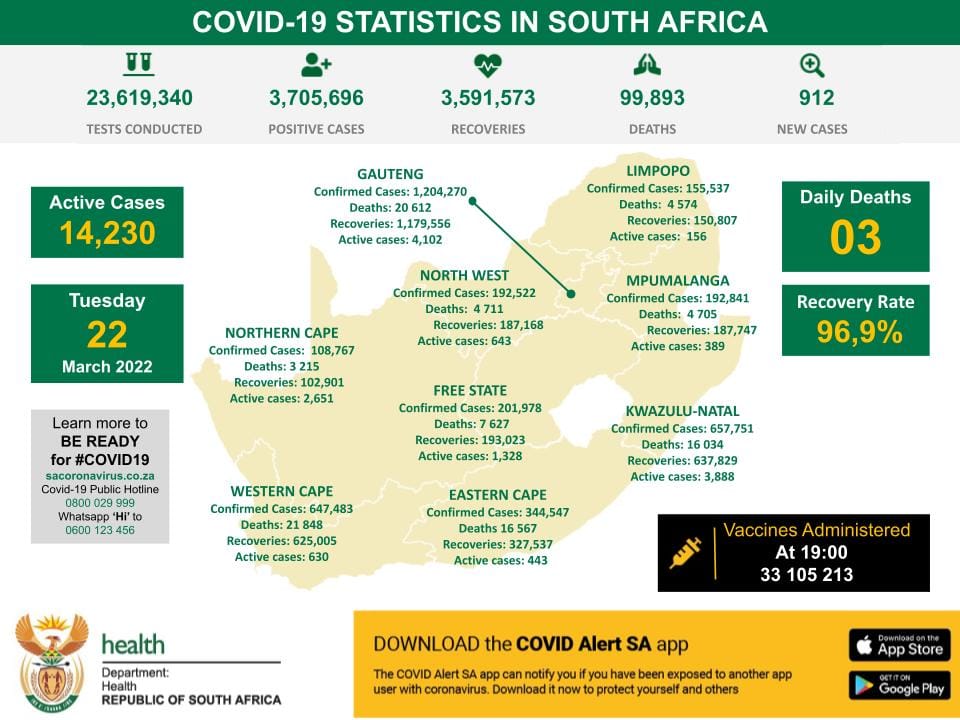 Sinovac ‘as effective as BioNTech after three doses’

Sinovac Biotech’s Covid-19 vaccine is as effective as the BioNTech vaccine in preventing severe infections or deaths after three doses, according to a study by researchers at the University of Hong Kong.

For those who have taken two doses, Sinovac is less effective in preventing serious illness or death for the elderly, the study showed.

The researchers estimate about 4.4 million people in Hong Kong, or about 60% of the population, have been infected as of March 20.

The city also announced 190 new deaths, mostly elderly people, while 41 patients are in a critical condition in hospital.

China has asked each province to have at least two to three makeshift hospitals to treat Covid infections, Jiao Yahui, an official with the National Health Commission, said at a briefing.

The facilities must be able to be activated within two days when needed. The country also planned to speed up its mandatory testing in order to better curb the spread of the virus.

Hong Kong’s new policies to ease quarantine rules and roll back physical-distancing measures fail to address major concerns of the local and international business communities and threaten its standing as a financial hub, according to commerce groups.

While Monday’s announcements around ending a flight ban and shortening quarantine signalled a tentative pivot toward reopening, there are lingering concerns in the city – following a U-turn on quarantine last year that sparked travel chaos – that officials may reimpose restrictions if case numbers were to climb again.

Singapore aims for entry for all vaccinated travellers

Singapore is aiming to allow anyone who is fully vaccinated against Covid-19 to enter the country, the country’s trade minister, Gan Kim Yong, said, rather than relying on specific Vaccinated Travel Lane flights for quarantine-free entry. A plan will be announced “in good time”, Gan said at The Economist’s Asia Trade Week event.

“There should not be an iota of relaxation,” said Liang Wannian, a seasoned epidemiologist who has overseen China’s Covid response since the beginning of the pandemic and was recently sent to Hong Kong to guide efforts to contain its worst-ever outbreak.

His remarks, made in an interview with the state news agency, Xinhua, came hours after Hong Kong set out a plan for easing its most stringent curbs to salvage its status as a global financial hub.

Travelling to Hong Kong isn’t set to get much easier once a ban on flights from nine countries including the US and the UK is lifted, with Cathay Pacific Airways planning just one inbound flight every two weeks.

The airline said it isn’t able to expand its schedule any more than what it was planning due to “the possibility” of falling afoul of the city’s 14-day ban on airlines that carry too many passengers found to be infected with Covid.

The Omicron subvariant BA.2 is continuing to gain ground in the US, according to Covid-19 tests sequenced over the last two weeks.

Helix, a San Diego-based genomics firm, has been watching the BA.2 variant since it first popped up in the US in early January. Although it was initially slow to take hold, Helix now estimates that 50% to 70% of all Covid cases nationwide are BA.2.

Data from the UK — where BA.2 has already caused cases to spike — show the country’s rise in infections began around the same time that BA.2 surpassed the 50% mark of overall cases.

Chinese medical clinics will be able to buy Pfizer’s Covid antiviral Paxlovid  at a price agreed between its producer and the government, and expenses will be covered by medical insurance, the country’s National Healthcare Security Administration said.

China will also temporarily include rapid antigen tests and kits in its medical insurance reimbursement list.

Shanghai saw 896 Covid-19 cases on Monday, CCTV reported, posting a record for a second straight day. The flare-up has come after authorities expanded testing to more residents to root out silent transmission chains. The city last week ruled out imposing a broad lockdown, but officials said Monday that some areas will remain locked down for further testing.

Restrictions end in Japan after 2½ months

Japan’s government lifted quasi-state of emergency measures in Tokyo and elsewhere across the country on Monday, bringing to an end steps introduced in early January to help curb a surge in Omicron cases.

Cases have slid in the capital since peaking in early February, with Tokyo seeing an average of about 7,500 cases a day as of Monday.

A Kyodo News survey found that 53% said the timing of ending the steps was appropriate, with 32% saying it was too early. Another 11% felt the move came too late. The quasi-state of emergency in practice was used to call for bars and restaurants to close early, with eateries that followed the largely voluntary steps in Tokyo having closed at 9pm.

Europe faces a revival of virus risks as cases spread rapidly, accelerated by the emergence of the more-transmissible BA.2 Omicron strain. Germany is now setting fresh records for infection rates almost daily, while Austria has also reached new highs and cases in the Netherlands have doubled since lifting curbs on February 25.

“The messaging from politicians is encouraging many people who were taking precautions to mix with others,” says Martin McKee, professor of public health at the London School of Hygiene and Tropical Medicine. “It does seem very courageous, and indeed risky, to assume that the pandemic is over.”

Most authorities have shrugged off the surge, however, showing little appetite to reimpose curbs after easing measures just a few weeks ago. Germany has stuck with plans to let most nationwide restrictions expire. Austria last week suspended a law that made coronavirus vaccinations mandatory, stepping back from one of Europe’s strictest measures. In France, millions of high school students and teachers ditched masks for the first time in almost two years last week.

US government advisers will meet early next month to discuss the use of additional Covid-19 booster shots as states and companies lower prevention safeguards such as masking and work at home.

The Vaccines and Related Biological Products Advisory Committee will meet on April 6, with the FDA calling the meeting for help deciding which populations, such as the elderly or immunocompromised, might need boosters, and when they should be administered. DM/MC

– With assistance from Jessica Sui and Ramsey Al-Rikabi.