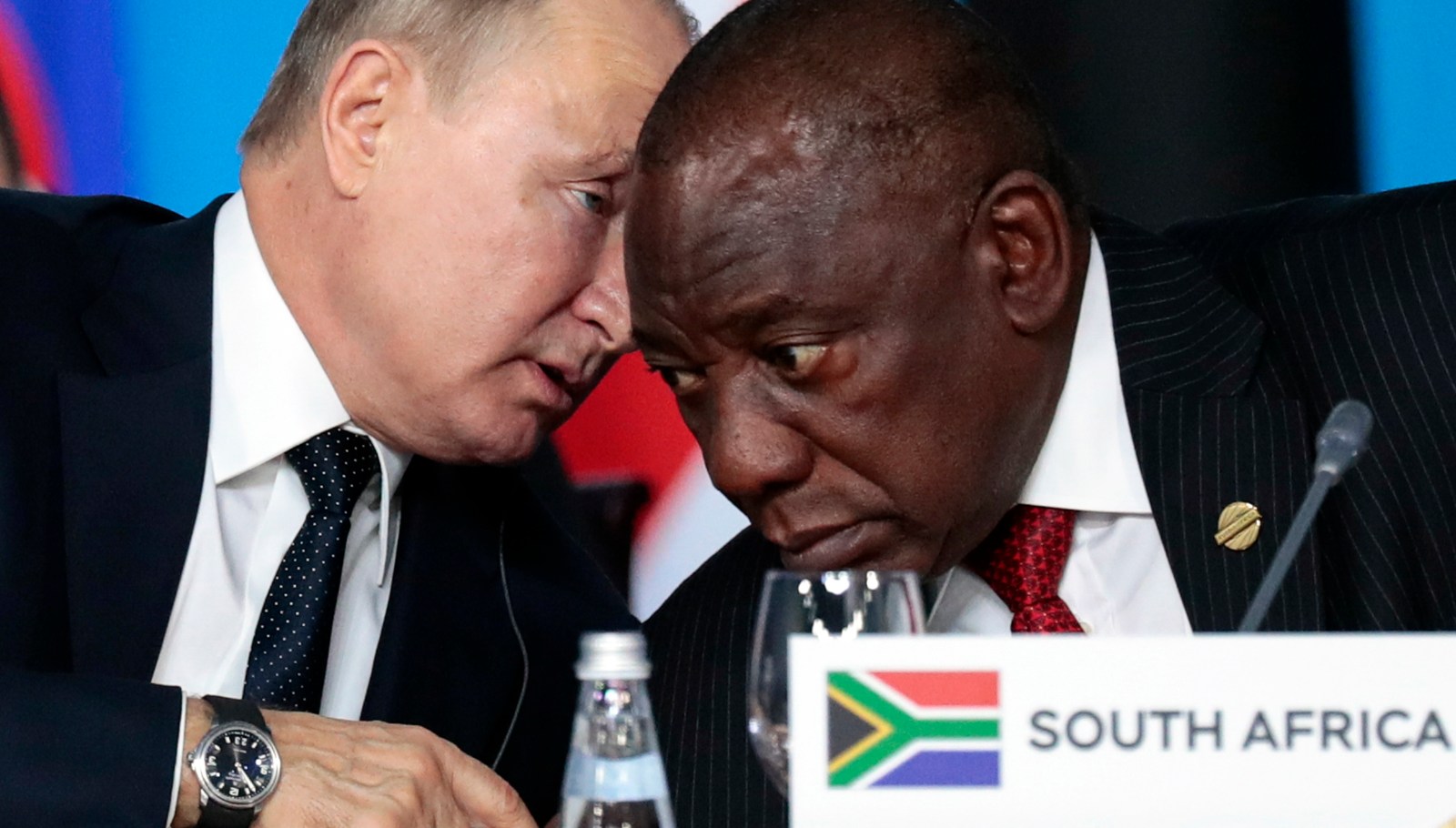 In a House divided, DA leader John Steenhuisen said the governing ANC has shafted South Africans over its misguided historical Cold War loyalties. The ANC pushed diplomacy for peace – and then got personal.

Sometimes the importance lies in what is not said. In Tuesday’s parliamentary debate, the governing ANC studiously sidestepped any combination of words that would amount to saying “the Russian invasion of Ukraine”. Instead it was the “Russia-Ukraine matter”, and “developments in Ukraine” – although Deputy Finance Minister David Masondo stood out by referring to “the conflict”.

The topic of Tuesday’s debate on matters of national importance was  “the impact of the Russian Federation’s invasion of Ukraine on the South African economy”.

That impact, everyone agreed, would not be good for South Africa as rising oil prices trigger petrol price hikes, increasing food prices – all impacting on inflation and economic recovery.

Or, as Steenhuisen put it: “We may be nine thousand kilometres away, but we will soon feel its effects in every single aspect of our lives.

South Africa found itself on the wrong side of history, according to Steenhuisen, because the ANC got it wrong in that it wasn’t Russia that supported the anti-apartheid fight, “it was the Soviet Union, and that solidarity included Ukraine, the country now being attacked”.

As ANC speakers pushed diplomacy and peace, Supra Mahumapelo, chairperson of the international relations parliamentary committee, in a bizarre move, delivered his contribution on what he called “Steenhuisenism”.

Or the “infant political phenomenon of Steenhuisenism… This infant philosophy is a political resurgence of global imperialist onslaught on progressive forces”, as Mahumapelo put it.

“It (Steenhuisenism) has no capacity to comprehend both historical and dialectic materialism. That is why the DA et al will seek us to debate this matter in isolation from geopolitical objective and subjective factors…

“The Steenhuisenist DA seeks nothing but for us to unthinkingly attack, isolate and treat President Putin as an international political skunk and pariah of modern history. This we shall not do as the ANC.”

I am deeply grateful to the ANC for promoting and accepting this great new doctrine. May it take root and flourish….#Steenhuisenism pic.twitter.com/lu7EVxt5gg

On the ANC side of the House, Social Development Minister Lindiwe Zulu responded to an earlier heckle about when President Ramaphosa intended calling Ukraine’s President Volodymyr Zelensky.

“Don’t speak about things you don’t know about,” was her retort, repeatedly emphasising how the ANC did not read about war or Google war, but had known and experienced it.

“In this particular case, I can assure you that President Cyril Ramaphosa will speak to both sides to make sure both sides are brought to the table.”

The diplomatic community in South Africa would have immediately pricked up their ears on hearing that comment, particularly as Zulu – in her ANC National Executive Committee role – heads the sub-committee on international relations.

How exactly Ramaphosa would feature in negotiations to bring about peace remains unclear. A previous communication came through the Presidency’s Twitter account

Thanking His Excellency President Vladimir Putin for taking my call today, so I could gain an understanding of the situation that was unfolding between Russia and Ukraine. pic.twitter.com/jzuWXyIjfL

That presidential tweet set the line of resolving “the conflict” by diplomacy, mediation and negotiations that was also pounded home by ANC speakers in Tuesday’s debate.

“South Africa urges all parties to approach the situation in a spirit of compromise, with all sides respecting international law. Peaceful resolution of the matter can be achieved by all parties if diplomatic efforts are made to find a solution to the concerns raised (and) expressed by Russia…”

Meanwhile, the fourth round of direct discussions between Russian and Ukrainian senior ministers is taking place virtually on Tuesday, after initial talks on the border of Belarus, an ally of Russia.

French President Emmanuel Macron is in regular contact with Putin, as are others. United Nations Secretary-General António Gutteres on Monday called for peace, saying the Russian military offensive against civilians was reaching “terrifying proportions” alongside the destruction of infrastructure in Ukraine, including 24 health facilities (https://news.un.org/en/story/2022/03/1113882).

“Food, fuel and fertiliser prices are skyrocketing. Supply chains are being disrupted. And the costs and delays of transportation of imported goods – when available – are at record levels,” said Gutteres, who added that he was in touch with all the people in touch with Putin – from France to Germany, the US and others – as the civilian death toll rises and over two million Ukrainians are now refugees, never mind those internally displaced.

“All of this is hitting the poorest the hardest and planting the seeds for political instability and unrest around the globe,” he said.

Ramaphosa’s role in all this remains unclear at this stage. And aside from Zulu’s comments, little detail emerged in the debate in the Good Hope Chamber that serves as the House since the fire that destroyed much of the National Assembly.

The ANC got the support of the EFF, whose chief whip Floyd Shivambu said via a crackly virtual link, “There is absolutely nothing wrong with the Russian Federation to prevent the expansion of the Nato presence. Nato is historically known for starting new imperialist wars.”

The National Freedom Party and Al Jama-ah also came out in support of the ANC position.

Everyone else called out South Africa’s neutrality stance, including its abstention in the 2 March UN General Assembly vote against the Russian invasion. The vote was supported by 141 member states with 35 abstentions. Russia, Belarus, North Korea, Syria and Eritrea voted against.

“(W)e must call out Russia on its wrongness. The invasion of Ukraine and the current war is wrong, and in total violation of every international statute and protocol in existence, or imaginable…

“The South African government has failed dismally in its attempt to be a voice of reason, freedom, and democracy, when it chooses to be half-pregnant, being neither fish nor fowl…”

Freedom Front Plus leader Pieter Groenewald agreed the government had failed South Africa’s people; if a country sends in tanks, that country is the aggressor.

“That you do not want to condemn in strong terms the war in the Ukraine, do they (the Russians) see you as a friend or a useful idiot?”

In the concluding debate contribution, Masondo tried to paint a silver lining with the expectation of a continued commodity boom – and continued higher tax collections for the public purse.

That’s despite rising petrol prices, which would trigger food price hikes and upward inflation. This is there for all to see. Less so the impact of the war on South African citrus fruit like lemons.

South Africa’s citrus industry exports between 7% to 10% of its product to Russia in a season that kicks off in April. That may be at risk should the conflict continue, but the search for alternative markets is already underway, according to Masondo, determined to turn lemons into lemonade.

But no one needs lemons in a war. DM

Food security, war in Ukraine and climate crisis in the spotlight as African Development Bank meets