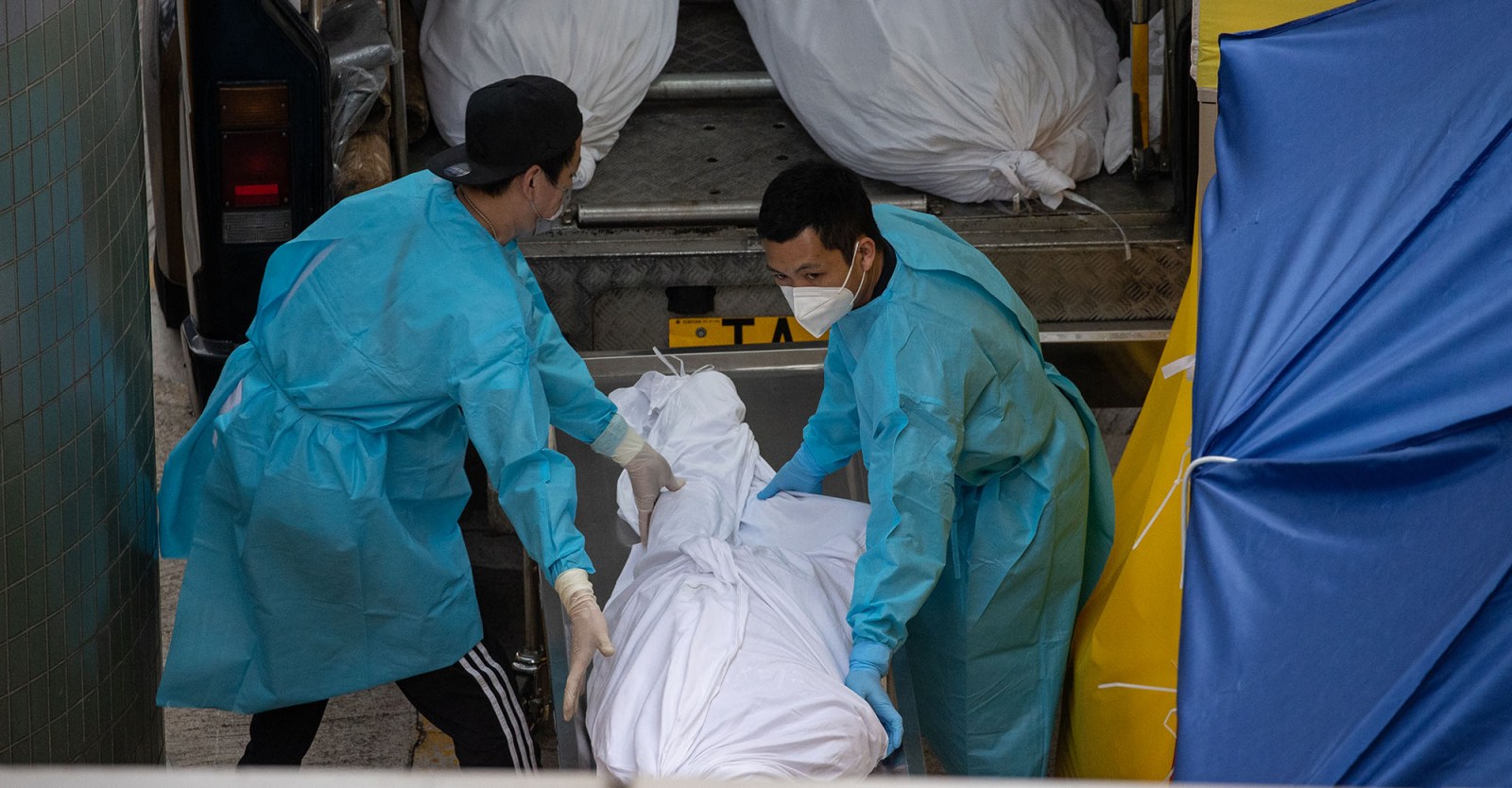 Hong Kong’s Covid-19 outbreak is likely to have peaked last week at about 50,000 cases a day, officials said, with more than 31,000 new infections reported on Thursday. The government is adding thousands of new isolation units for the infected, and it won’t reopen to international travel until the crisis has passed.

The city has identified nine sites to be used as isolation facilities, leader Carrie Lam said as she resumed daily virus briefings for the media as Hong Kong went from virus-free to having the highest death rate in the world in just a few months.

Elsewhere, China’s cases hit the highest since the Wuhan outbreak. Japan plans to increase its cap on overseas visitors. Thailand may classify the virus as endemic in July. 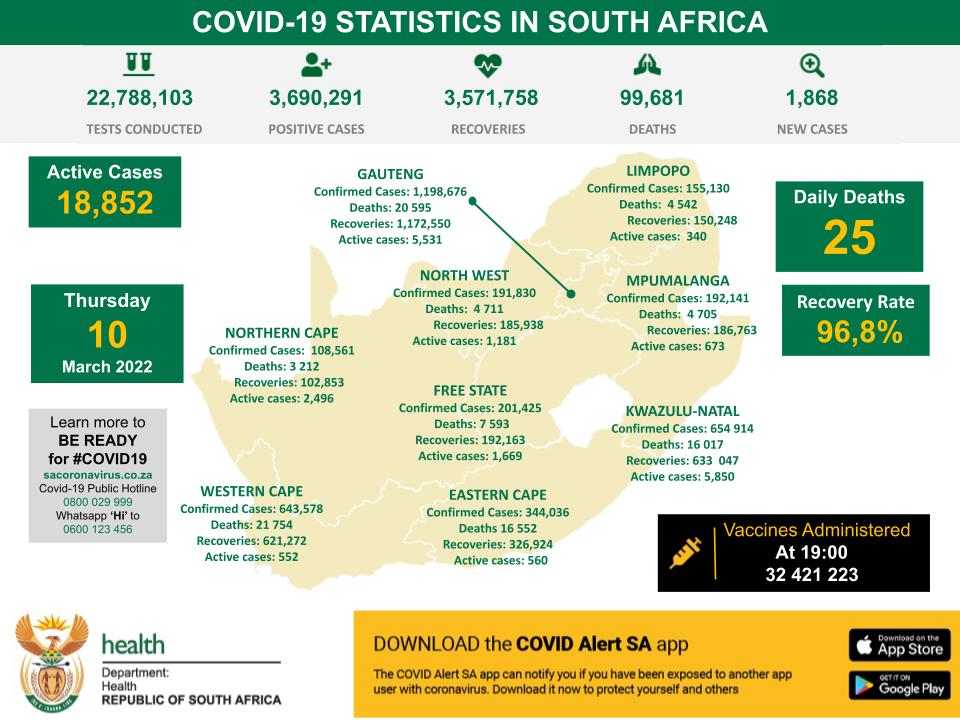 Hong Kong’s outbreak is likely to have peaked between 2 March and 4 March, said Albert Au, chief health officer of communicable disease of the Department of Health, when there were more than 50,000 new infections detected via PCR tests every day. The number of new cases has fallen consistently since then, with between 25,000 and 30,000 a day for the past four days, he said. Cases detected with rapid antigen tests have remained stable, he said.

“We are seeing a gradual decreasing trend and probably we have already reached the peak,” Au said. “We may see smaller numbers every day,” he said, while urging residents to remain vigilant since the virus was still circulating at high levels.

There were more than 31,000 Covid infections reported on Thursday, with 180 deaths. City officials disclosed another 101 deaths that occurred in late February and early March that weren’t immediately disclosed. Most of the fatalities were elderly.

The city has seen more than 600,000 Covid cases and 2,937 deaths since the latest outbreak began in January.

Germany registered a record number of new Covid-19 cases and the incidence rate rose for an eighth day as infections continue to spread rapidly without putting intensive-care units under significant strain.

There were 262,752 cases reported in the 24 hours until Thursday morning, surpassing the previous record of just under 250,000 hit at the beginning of last month. The seven-day incidence rate per 100,000 people climbed to 1,388.5, creeping back up toward February’s record of 1,474.3. Germany is poised to lift most pandemic restrictions from 20 March, with only “basic protection” measures — such as mandatory face masks on public transport — remaining.

The coronavirus may have killed one in every 200 South Africans.

Excess deaths during the Covid-19 pandemic, seen as a more accurate way of measuring its impact than official statistics, climbed to 301,106 in the week ended 5 March, according to South African Medical Research Council data released on Wednesday. That’s triple the official fatality rate of just under 100,000.

The number of deaths per 100,000 people was 506 in the nation of 60 million, according to the council. Researchers say almost all the excess deaths, calculated by plotting mortality against a historical average, are due to the virus.

An emergency message suddenly popped up on phones on Wednesday afternoon, accompanied by a ringtone and vibration that lasted several seconds. The message informed people that Queen Elizabeth Hospital would be used to treat Covid patients and non-Covid cases should seek medical help elsewhere.

Lam said the emergency alert system — approved by the city’s legislature in 2020 — was launched on Wednesday because Queen Elizabeth Hospital has the busiest emergency wards in Hong Kong.

Authorities in South Korea expect the spread of Covid-19 to reach its peak next week and may slow within the next two weeks, the Korea Disease Control and Prevention Agency said. South Korea earlier this week reported 342,446 daily new cases, a record.

Hong Kong won’t reopen for international travel until its Covid-19 outbreak is curbed domestically, Chief Executive Carrie Lam said at a briefing on Thursday as the city works to contain surging infections.

The financial hub cannot lift a ban on flights from nine countries including the US, UK and Australia because it will add more pressure to the already overwhelmed healthcare system and resources, Lam said during the press conference. Once community infections are eliminated, preferably after a compulsory testing of the city’s entire population, Hong Kong may open up a pathway for international travel, she said.

Japan plans to increase its cap on arrivals from overseas to 10,000 people a day from 1 April, the Yomiuri newspaper reported without attribution on Thursday, as it moves to accept a “significant number” of foreign students by the end of May. The government will increase Covid-19 testing capacity at airports to accommodate the increased daily arrivals.

Separately, the government is considering removing the attendance cap on events in areas under a Covid-19 quasi state of emergency, the Nikkei reports without attribution. Participants would be required to wear face masks and refrain from speaking loudly.

China reported 402 local confirmed cases and 435 local asymptomatic infections for 9 March 9, a new daily record since the Wuhan outbreak, according to a statement from the National Health Commission.

New Zealand revised how it reports deaths of people who have Covid-19, resulting in the official toll rising to 91, the Ministry of Health said in a daily update.

Officials will adopt the approach used by the UK and report all deaths of people who die within 28 days of testing positive.

Thailand may classify Covid as endemic in July

Thailand’s government has prepared a plan to classify the Covid-19 outbreak as endemic from 1 July, according to the Health Ministry.

New infections are expected to continue rising during March-April before gradually easing during May-June, according to the government’s top public health official.

Benjamin Netanyahu, head of the Israeli opposition, tested positive for Covid, a spokesman said on Wednesday.

US Democratic Party leaders jettisoned emergency pandemic response money from a $1.5-trillion government funding bill to quell a revolt within the party and clear the way for a vote on the legislation, which includes $13.6-billion for the US response to the war in Ukraine.

The mastermind behind Sweden’s Covid strategy that triggered widespread criticism at home and abroad has been hired by the World Health Organization as a vaccine coordinator.

Anders Tegnell will leave his position as state epidemiologist on 14 March and become “a senior expert” in a group that will coordinate the work between the WHO, the United Nations Children’s Fund UNICEF and vaccine organisation Gavi, Sweden’s public health institute said on Wednesday.

On his advice, Sweden responded to the pandemic in 2020 with a policy that shunned many of the harsh restrictions elsewhere. DM/MC

— With assistance from Iain Rogers and Shirley Zhao.