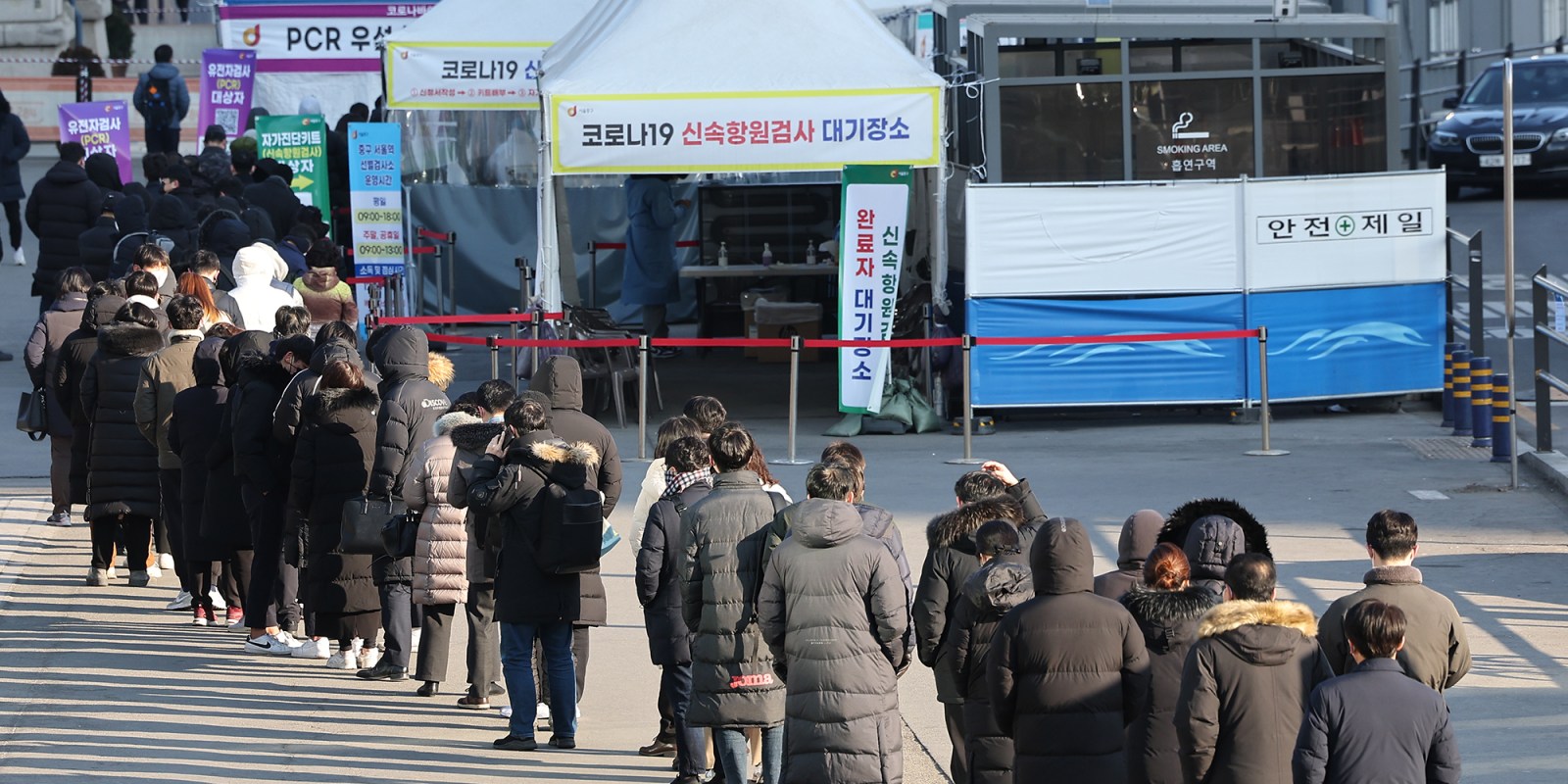 Hong Kong’s plan to test the entire population for coronavirus in March has been indefinitely postponed as the city prioritises vaccinating the elderly.

The city is still making plans for the mandatory citywide test, including the timing, Chief Executive Carrie Lam said on Wednesday in her first major briefing in two weeks. For now, authorities will focus on a vaccination drive for elderly people living at care facilities – which are seeing a surge in fatalities – and increase the number of hospital beds to treat patients, she said.

The shift away from mass testing follows suggestions from Liang Wannian, a seasoned epidemiologist who has overseen China’s Covid response and is now advising Hong Kong, and Lam’s comments closely echoed his language several times throughout the briefing – including around the need for the city to not “lie flat” in the face of the outbreak.

Authorities announced 25,991 Covid cases confirmed by nucleic acid testing and 32,766 cases that were reported on its new rapid-test self-reporting website, though about 9,700 were samples from March 6. The financial hub also recorded 195 deaths, mostly elderly and unvaccinated people. 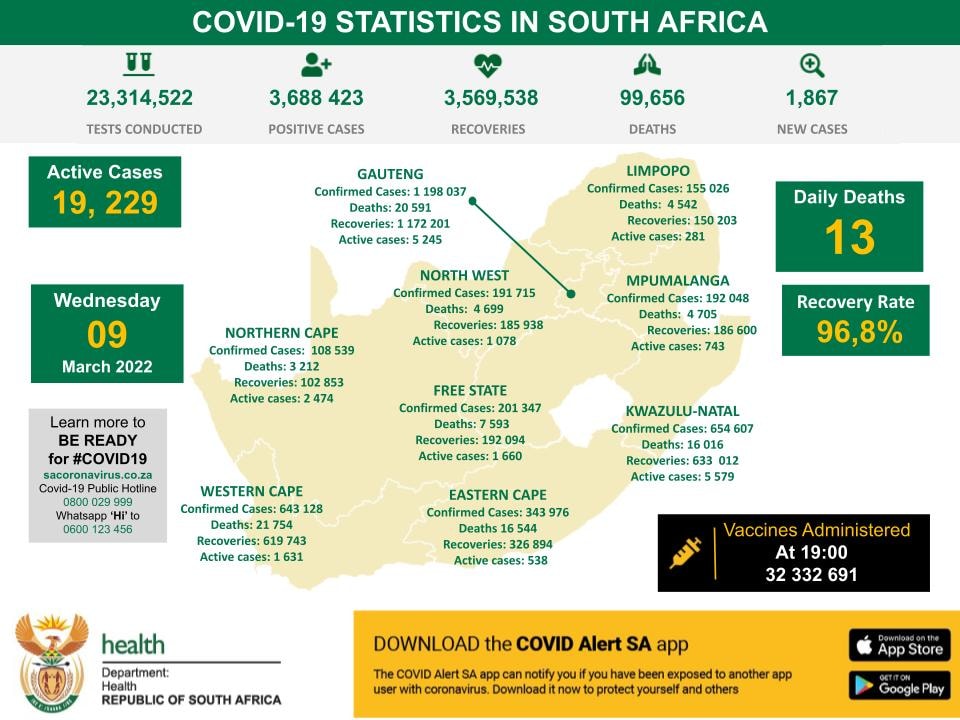 There are now good indications that Singapore’s current Omicron wave has peaked and is starting to subside, the Straits Times reported, citing health minister Ong Ye Kung as saying in Parliament.

Singapore will be in a better position to ease virus curbs further once the Omicron wave has subsided, according to Janil Puthucheary, Senior Minister of State for Health.

The Pentagon is reviewing whether to end increased progress payments to defence contractors, a policy started two years ago to buffer the impact of Covid-19 on subcontractors. Under the programme, $6.7-billion was expedited through December.

Adidas forecast strong sales growth for the year as demand remains robust for sneakers and sports apparel in Europe and the Americas with the pandemic easing. Sales will grow by 11% to 13% on a currency-neutral basis, the German company forecast on Wednesday.  That comes even as sales in Russia and former Soviet countries are expected to be cut in half due to the war in Ukraine.

Malaysia to get antiviral pill

Malaysia will receive Pfizer’s coronavirus oral antiviral pill Paxlovid at month-end, as the nation seeks to expand its treatment options, Health Minister Khairy Jamaluddin said in a briefing on Wednesday. Malaysia has procured Paxlovid to treat 110,000 Covid patients, he said at an event on the weekend.

Hong Kong to focus on vaccination drive for elderly

The pivot in priorities from mass testing follows suggestions from Liang Wannian, the leader of China’s National Health Commission’s Covid response team who is visiting Hong Kong. It also shows the strain on the city’s healthcare facilities, with hospitals overwhelmed and morgues unable to keep up with the growing number of deaths.

About 1.8 million people had become infected by March 7 during Hong Kong’s current wave of Covid-19, according to Gabriel Leung, the dean of medicine and a professor of public health at the University of Hong Kong. The city’s outbreak peaked on March 4 and daily infection numbers should drop below 1,000 by the end of April, he wrote on Twitter on March 8. About 4.3 million people will have been infected by the time the wave ends and about 5,000 people will have died, according to Leung.

China’s domestic Covid-19 infections topped 500 for a third day as outbreaks widened across the country and penetrated into megacities like Shanghai and Beijing as well as manufacturing hubs in southern Chinese province Guangdong.

While cases reach levels unseen since the initial outbreak in Wuhan two years ago, health authorities in major cities have largely avoided lockdowns and mass testing. Shanghai, which saw several dozen new cases, has largely adhered to targeted restrictions, such as locking down buildings that detected cases for two days for testing. Nearly 90% of China’s 1.4 billion people have been fully vaccinated and more than one-third have received booster shots.

Ontario to drop most mask mandates

Ontario is set to drop most mask mandates including in shops, restaurants, elementary and secondary schools on March 21, Toronto Star reported. An announcement was expected on Wednesday from Ontario’s chief medical officer of health, Kieran Moore.

Malaysia will allow quarantine-free entry to fully vaccinated travellers from April 1, ending almost two years of stringent border controls introduced to contain the Covid-19 outbreak. The reopening marks the final step in the lifting of virus curbs, as Malaysia joins other Southeast Asian nations in transiting to the endemic phase of the outbreak. A high vaccination rate – 64% of adults have got booster shots – has allowed the government to roll back restrictions that battered the tourism sector and pushed the economy into contraction for two quarters in 2021.

South Korea had a daily record of 342,446 infections on Wednesday. Critical cases also rose to a record high of 1,087. The country reported 158 coronavirus-related deaths, according to the Korea Disease Control and Prevention Agency. The mortality rate declined to 0.18%.

Japan’s economy expanded at a slower pace than first estimated last quarter, suggesting the recovery already had less momentum when the country was hit by the Omicron variant of coronavirus. The gross domestic product grew an annualised 4.6% in the three months through December, revised figures from the Cabinet Office showed on Wednesday. Economists had expected a 5.6% increase, compared with the government’s initial 5.4% estimate.

New Zealand will reduce the isolation period for Covid-19 cases and their household contacts to seven days to get more people back to work. The period will reduce from 10 days effective at 11.59pm on Friday, March 11 in Wellington, Minister for Covid Response Chris Hipkins said.

New Zealand is facing the reality of the pandemic as Omicron takes hold, with reported daily cases exceeding 20,000 and the likelihood of thousands more unreported. City streets are quiet and many businesses are closed as staff self-isolate and people work from home.

US to impose minimum staffing requirements on nursing homes

The Biden administration is set on a plan to impose minimum staffing requirements on nursing homes, according to a top health official, even as industry groups say it won’t work without more funding. The staffing proposal is part of a broad agenda President Joe Biden released last week to bring greater scrutiny to a US nursing-home industry whose patients and workers have been devastated by Covid-19. More than 201,000 residents and staffers have died from Covid in nursing homes and other long-term care facilities, according to the Kaiser Family Foundation.

Hawaii on Tuesday became the 50th and final state to announce that it will drop its universal indoor mask mandate, The New York Times reported. Masks are still required indoors at schools in Hawaii, even though the state’s education department on Tuesday lifted the outdoor mask mandate on school campuses. But the end of the blanket mandate marked an abrupt reversal from a week ago.

Almost 70% of nursing homes in Hong Kong have 10 or more infections, government officials said in their daily briefing on Tuesday.

The virus is also roaring through disabled-care facilities, with more than 68% experiencing outbreaks. Among those who died were a 25-year-old home resident with cerebral palsy and a person (36), with Down Syndrome, also living in a care facility.

Despite evidence from early on in the outbreak that the elderly and those in residential care environments were particularly vulnerable to the virus, Hong Kong failed to prioritise vaccination for these groups since shots became available. Fatalities in the city’s worst wave of the pandemic have been concentrated among the elderly – who had been advised to be cautious about getting the Covid-19 vaccine – with the death rate for older people who aren’t double vaccinated more than 10%.

Authorities now say vaccinating the elderly is a top priority.

San Francisco employers would have to grant more flexible work arrangements to employees, including remote workers, under amendments to the Family Friendly Workplace Ordinance the Board of Supervisors unanimously passed on Tuesday.

Employers with 20 or more workers would have to provide the flexibility if requested in writing unless it would cause undue hardship. This could include modified hours, job sharing, and a change in work location to allow more leeway in child or elder care.

Pfizer to submit data to US regulators on fourth dose

Pfizer will soon submit data to US regulators on a fourth dose of its Covid-19 vaccine, Chief Executive Officer Albert Bourla said.

Bourla said he spent Tuesday morning reviewing new data from various Covid vaccine studies, including one looking at the effects of a fourth dose of the currently available vaccine, as well as a new formulation that will protect against multiple coronavirus variants. DM/MC

– With assistance from Phoebe Sedgman.