Like wars in Europe, conflicts closer to home affect us...

Like wars in Europe, conflicts closer to home affect us – ordinary Africans need our care, too 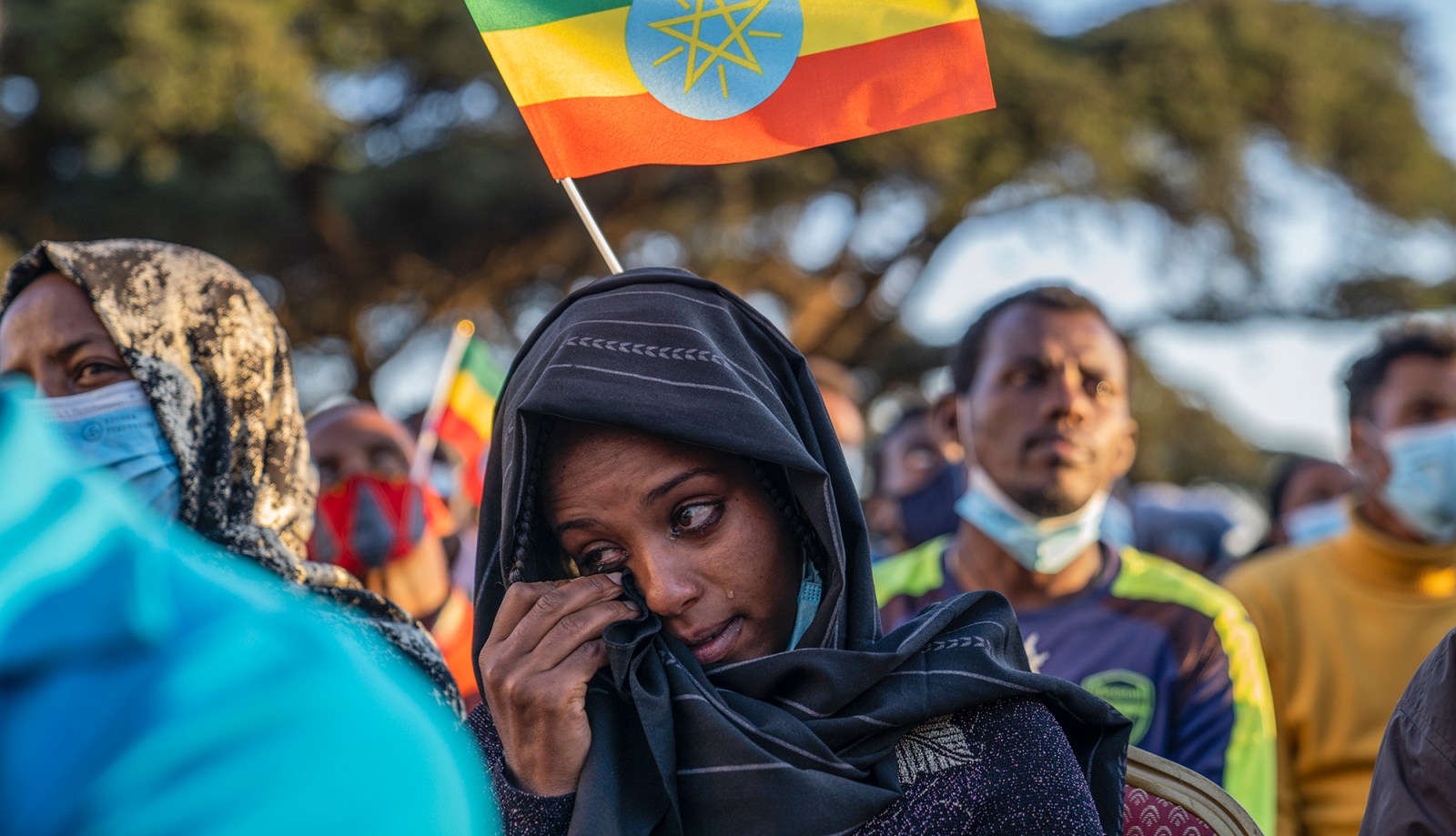 An Ethiopian woman weeps during an event in the capital Addis Ababa marking a year of war in Tigray on 3 November 2021. (Photo: EPA-EFE/STR)

Some people argue that South Africans care about wars in Europe because those will drastically affect our lives here. But the long and deadly wars raging closer to home change our lives in fundamental ways, too.

Samuel is a quiet 12-year-old who lives in the Ethiopian capital of Addis Ababa. A few months ago there was an attack on his home town, Lalibela, by Tigrayan rebels, and he fled on foot through the bush with his mother, his five-year-old brother and family.

In recent weeks, the situation has calmed down enough for people to return home. One or two foreign tourists early in January even visited the picturesque town with its rock-hewn churches, built thousands of years ago, to celebrate Orthodox Christmas.

But schools are still closed and electricity is still down, which is why Samuel now goes to school in Addis. Outwardly, Samuel seems fine, but his little brother was clearly traumatised by the death and destruction the family witnessed.

Still, they’re alive, and lucky compared with other victims of the conflict, such as the Eritrean refugees in the Bahrale refugee camp in Ethiopia’s northeastern Afar region, who were attacked last month in the place they sought shelter. At least five people were killed and a number of women kidnapped, but there were no breathless, blue-eyed reporters on the scene to tell the world how much their lives mattered.

Part of the reason for this is that the Ethiopian government makes it exceedingly difficult for journalists to get permits to report on the conflict.

Information is as much a weapon in war as, say, the ethically ambiguous Turkish drones that were used in Ethiopia and Ukraine, among others, to take out “enemy” individuals. Some reporters have found a way, braving harassment, detention and danger, and the story is out there for the world to see, if only it cared to look.

Fifteen months into the conflict in Ethiopia – it started when Tigrayan rebels in the north attacked an army base and the Ethiopians retaliated with force – and I’m yet to see friends on social media drape their profiles in shades of red, yellow and green. Sunflowers and yellow-and-blue flags went up mere days after Russian tanks rolled into Ukraine last week.

It’s hard to tell how many people have died in Ethiopia’s chaotic conflict so far, but whether it’s 10 or 10,000, most of the more than 100 million people there are suffering the economic consequences of two years’ worth of pandemic and war.

In Gondar – usually a magical town – only last month, hospitals were so full of the wounded that critical healthcare for ordinary citizens had to pause – a bit like what happened during the worst waves of the Covid-19 pandemic in South Africa.

Closer to home, in the northern part of next-door Mozambique, militants have been on the rampage for years, attacking local people and razing villages and other infrastructure. The world took notice in March 2021, after a deadly horror attack on expat contractors. South Africa and its neighbours have subsequently sent soldiers to help drive back insurgents and protect the locals. Better late than never.

The intervention forces have suffered some losses, and it included a South African, just before Christmas of 2021. He’s considered a hero, even though the chattering establishment was more preoccupied with wishing each other better luck for 2022 at the time.

If only out of self-interest, South Africans could be motivated to care about the conflict because the US Department of the Treasury sanctioned four men based in South Africa this week who had allegedly helped facilitate money and even safe houses for people linked to the insurgents in Mozambique.

Among the “fundraising” methods used are extortion, theft and kidnappings for ransom, and it’s likely that some South Africans have become unwilling donors – and were badly hurt in the process.

The men also use South Africa’s financial system to facilitate funds for violence elsewhere on the continent.

The insurgency in Mozambique and elsewhere on the continent, therefore, has some roots here too.

It’s important to note this because some have argued that people care more for wars in Europe because those will drastically affect our lives here. The fuel price rise this week is perhaps a bitter foretaste of what is to come.

But the wars closer to home change our lives too in the ways mentioned above, and it sends refugees our way – except the Department of Home Affairs is collapsing so badly that refugee reception centres still haven’t opened their doors following the Covid-19 lockdown. The inability to process and document people properly has in part contributed to violent civil unrest and Afrophobia.

Although, ideally, these conflicts should be prevented before they start, the South African government’s decision to donate food and health supplies to Ethiopia is the right thing to do.

Warlords, oligarchs and military-industrial establishments are the ones that benefit from wars. Ordinary people end up miserable, losing livelihoods, loved ones, their lives.

Taking note and caring for their plight – regardless of their colour, creed, financial status, or media saturation – is what makes us human. DM168