Stories of sadness and determination as mothers and chi...

Stories of sadness and determination as mothers and children flee Ukraine 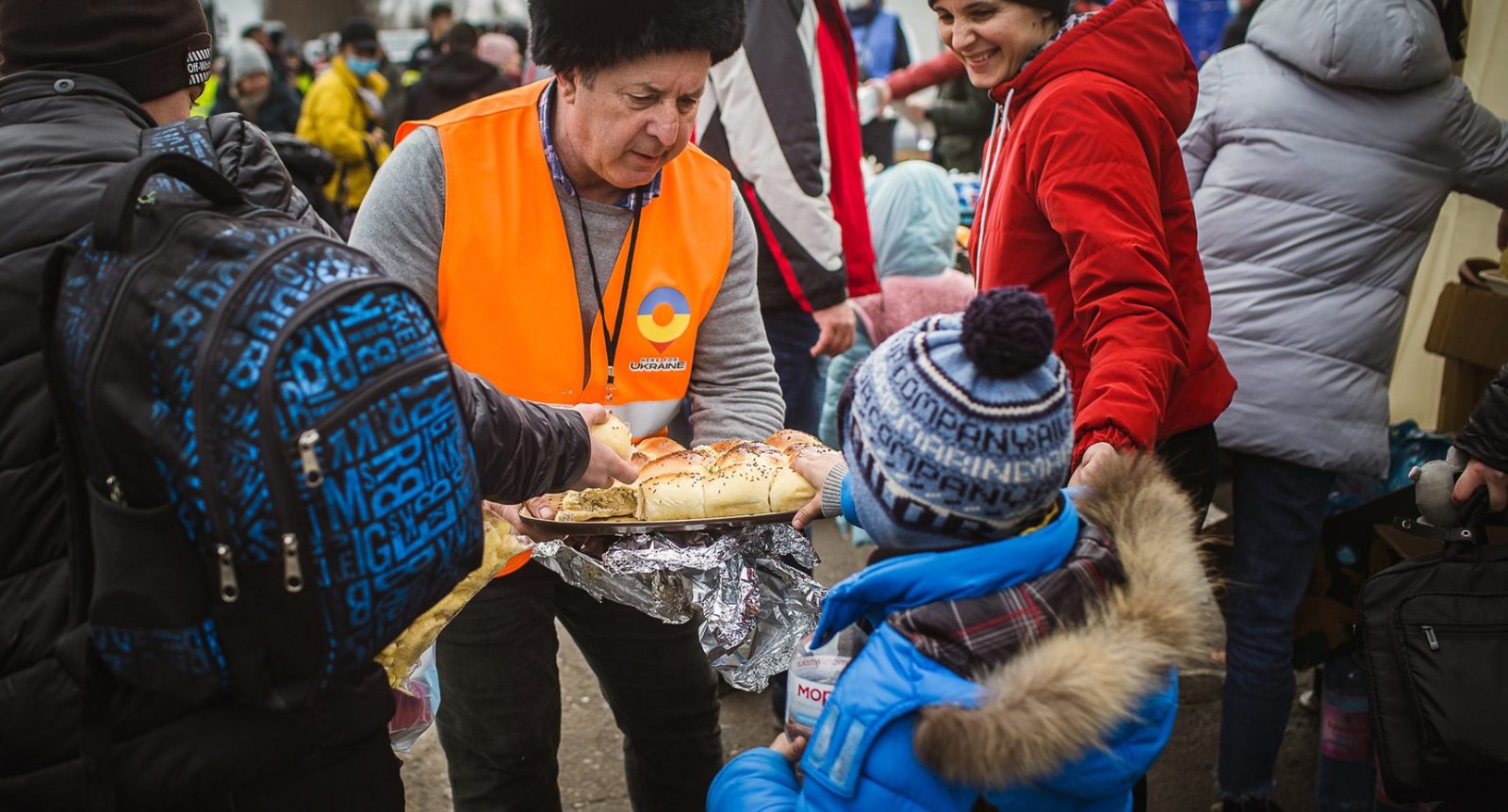 A volunteer hands food to seven-year-old Makvee who has just arrived on the ferry from Ukraine to Romania. (Photo: UNICEF/Moldovan)

‘I’ve been crying for two days,’ says Leanne, as she recounts how she fled from her home to escape the escalating conflict in Ukraine. ‘My husband said I should leave to keep our boy safe.’

Leanne and eight-year-old Yaroslav are just two of the thousands of people, mostly women and children, who have just stepped onto safe land in Isaccea, Romania after crossing the Danube River on a crowded ferry. But while the passengers are thankful to have made it safely away from the violence, many confront considerable uncertainty about what happens next.

“I don’t know where I will go now, if I’ll ever see my husband again,” Leanne says. It’s a tragic and desperate story, one echoed by every woman and child we meet. The sense of shock among these families is palpable as they describe how their lives have been turned upside down.

“I told them it’s a vacation for several weeks,” says Iryna, who arrives on a later boat. She has been desperately trying to manage the growing fear among her two daughters, five-year-old Dasha and eight-year-old Masha.

The current scenes are in stark contrast to what someone standing at the dock would have witnessed just a couple of weeks ago. Then, the ferry was shuttling back and forth, carrying families taking holidays, businesspeople travelling for meetings, or people going to visit relatives or friends. Today, people have taken the journey in a desperate bid to save themselves and their families.

“I left for my children,” Iryna says. “I wouldn’t have gone if it wasn’t for my daughters.” She shows us a colorful schoolbag that the family packed with books. Aside from that, the only things they could carry were a little food, medicines and some clothes.

Iryna has left family, her home and her business behind, but the creeping violence left her no choice. “We didn’t sleep at all, I don’t remember sleeping,” she says, struggling to recount the horrors of recent days. “The siren was going off and we were underground.”

“In Odessa, I had a store that sold beautiful clothes, but now I can’t imagine what’s happening.” She says her husband, a sailor, was abroad when the conflict started. It’s visibly difficult for Iryna to reflect on the life that she built for her family, a life she had no choice but to leave behind for the sake of her children’s safety.

It’s a nine-hour drive north to the Romanian town of Sighetu Marmației, overlooked by the serene and snow-covered scenery of the Carpathian Mountains. Women and their children are arriving by the hundreds, if not thousands. Some are in cars, but most are wheeling suitcases and carrying backpacks containing whatever they could pack quickly.

There’s no water to cross here, but the stories are similar.

Maria and her three-year-old daughter Ksenyna sit at a Unicef-supported “Blue Dot” space. The hub provides information and guidance for people arriving, family reunification services when needed, and a place for children to rest and play a little.

“I have one reason I’m here,” Maria says. “It’s for my daughter, she was very afraid.” Ksenyna is focused the soft toy she managed to bring with her. In the background, the voices and cries of children pierce the icy air.

Maria fled her home when the fighting came within hundreds of metres of her front door. “It was too dangerous to stay,” she says. “I had some work before, but I have no idea what I should do, now I have nothing.” She is waiting for a friend’s contact to pick her up and take them to Moldova. She is thankful that they are now safe. But the family’s future is now deeply uncertain, one of the many, endless tragedies of conflict.

The common priority among every family arriving here is the children. Despite leaving husbands, partners and family behind, each and every mother here has made their determination clear: to do whatever they can to ensure their children have a future.

Peace would make that much easier and is needed desperately, now. DM/MC

Toby Fricker heads Unicef South Africa’s Communication and Partnerships team and has recently returned from Romania, following a trip to support Unicef’s work for children and women fleeing Ukraine. He previously led Unicef’s global humanitarian advocacy campaign and was a member of the “Emergency Response Team” working to protect the rights of children affected by conflict. This included travelling across the world’s conflict zones on numerous assignments, from Afghanistan to Syria, northeast Nigeria to east Ukraine, Palestine to Sudan and Cameroon, among others, to cover humanitarian- communication-related work. Toby was based in Jordan for three years, from 2012 to 2015, working with Unicef on the response to the Syrian refugee crisis, and before this lived and worked across continents, covering issues from terrorism in Indonesia to the impact of conflict on children in northern Uganda and Laos.