Calls for SA government to condemn Russia’s invasion of Ukraine 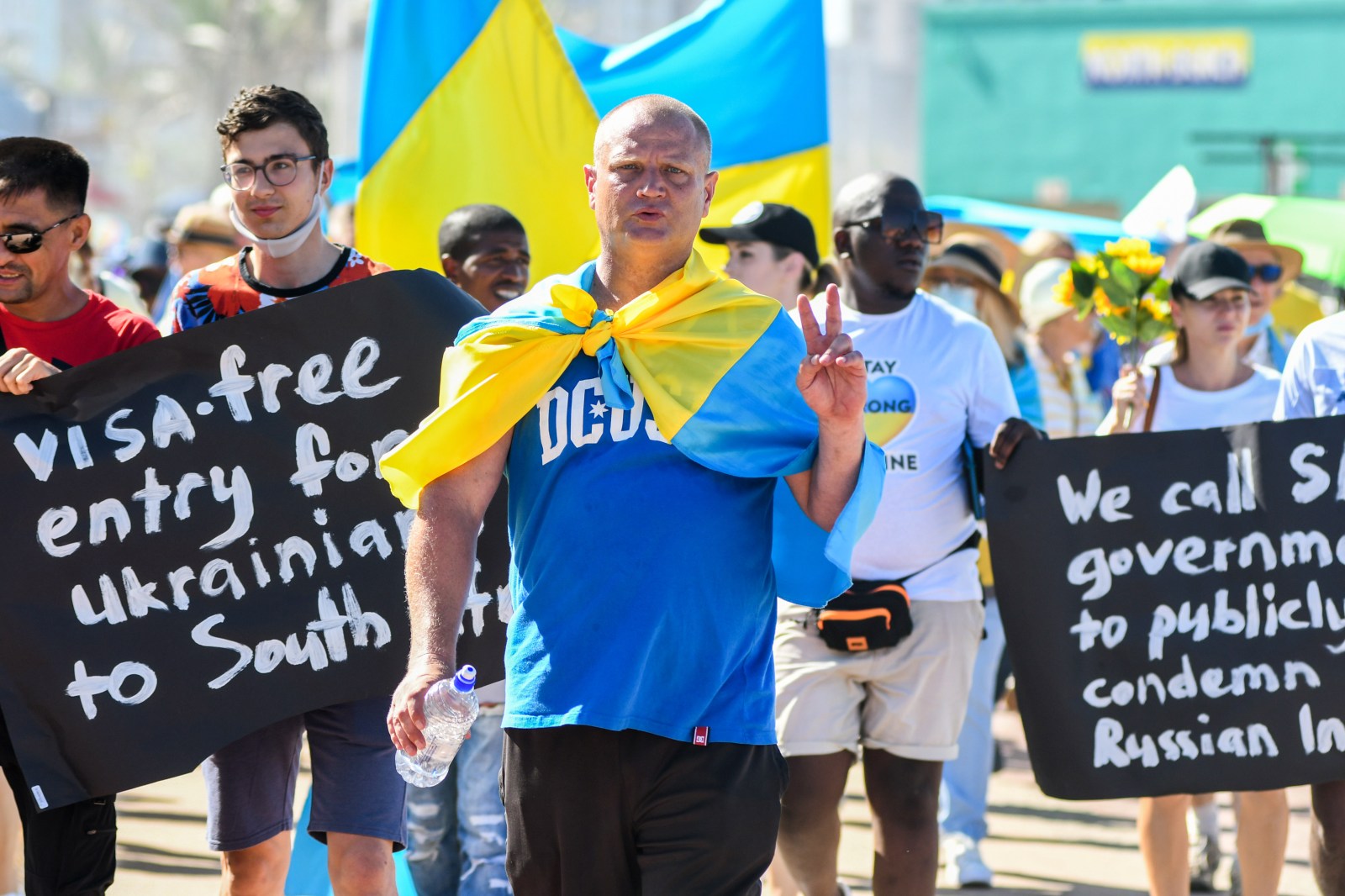 The protest against the Russian invasion of Ukraine at North Beach, Durban on 6 March 2022. (Photo: Gallo Images / Darren Stewart)

While reactions to Russia’s invasion of Ukraine continue to mount across the world, so are responses in South Africa from civil society, politicians and ordinary citizens.

On Sunday, Ukrainians and South Africans marched along the Durban North beachfront in solidarity with Ukraine. The peaceful march was organised by the Ukrainian Association of South Africa (Uaza) and followed a series of protests across the country against Russia’s invasion of Ukraine.

“I would hope that — seeing as though South Africa fought at length for its freedom — it would know what war is and what human rights are, so it would support us,” said Nataliia Galak, Uaza’s social media management assistant, who was at Sunday’s march.

Uaza called on the South African government to “immediately and unequivocally” condemn Russia’s invasion of Ukraine, saying it was ashamed that South Africa had abstained from a United Nations General Assembly resolution on 2 March.

HAPPENING NOW: A group of protestors have taken to the Durban Beach front to demonstrate against Russia’s activities in #Ukraine… @Newzroom405 pic.twitter.com/kCKHg57IVX

Daily Maverick has received an outpouring of responses from readers who have called for decisive action from the government on Russia’s invasion of Ukraine, following South Africa’s decision to abstain from voting on the United Nations General Assembly resolution condemning Russia’s assault on Ukraine. South Africa was one of only 35 nations that abstained.

Nicola Spurr, a South African citizen living in the UK, told Daily Maverick that she had on Thursday, 3 March, written to the South African High Commissioner in London to express her deep concern that President Cyril Ramaphosa “has held back from condemning outright the invasion of Ukraine.

“It is very clear from the footage emerging daily, brought by a wide range of journalists and analysts based in the country and abroad, that this unwarranted attack by Russia is characterised by the use of cluster bombs, thermobaric bombs and artillery fire that is aimed at civilian, not just military, targets. The human and environmental cost of this war will be incalculable,” said Spurr.

“We are at a critical moment in this war where we still have an opportunity to de-escalate and persuade [Russian] President [Vladimir] Putin to stop. This window is small and closing rapidly,” Spurr added.

In her letter, Spurr urged the high commissioner to “play [her] part and use [her] influence” to urgently channel efforts into persuading Putin to withdraw from Ukraine.

Spurr also urged the high commissioner, with South Africa’s Department of International Relations and Cooperation, to step up efforts to bring South Africans home. In addition to many South African students, “there are many others needing immediate financial support, accommodation and safe passage across Europe,” said Spurr.

Julie Gardiner, another South African to speak up on the conflict, told Daily Maverick she felt ashamed to be South African and was disillusioned with South Africa and its stance on the invasion of Ukraine.

“I am living in a country where the leaders have gone silent; lost their backbone and voice,” said Gardiner.

“[President Ramaphosa], you are taking the same stance as you always do — putting your head in the sand and hoping the problem will go away,” added Gardiner. “Watch the news — innocent people are being killed and displaced. A tragedy is happening on our watch, and we are doing nothing.”

Political parties have been divided on Russia’s decision to invade Ukraine.  The DA has come out strongly in support of Ukraine while the ANC remains largely internally divided over the issue.

On Sunday, the DA launched a petition for the South African government to take a “decisive stand” on the Russian invasion of Ukraine.

“In the face of such an overwhelming atrocity, South Africa cannot stand idly by while its comrade ravishes a neighbouring country. Historic loyalty does not trump declarations of war,” the DA’s shadow minister of international relations and cooperation, Darren Bergman, said on Sunday.

The DA called on the South African government to:

The ANC has condemned MultiChoice and called on it to reconsider its “decision of censorship”, following the service provider’s announcement on Thursday, 3 March, that the Russian state-backed channel Russia Today (RT) would no longer be available on DStv until further notice.

“The African National Congress (ANC) notes the draconian decision by the European Union (EU) to impose sanctions on Russia and its entities, including global media organisations following the escalation of hostilities between Ukraine and Russia.

“Subsequently, this has resulted in the South African MultiChoice platform unilaterally withdrawing Russian TV from its offerings, impacting negatively on the freedom of choice to subscribers and limiting their consumption of news on the developments in the Ukraine-Russia conflict,” ANC national spokesperson Pule Mabe said on Saturday.

“The ANC also calls on MultiChoice to reconsider its decision of censorship and immediately reinstate Russian TV on its platform,” added Mabe.

The IFP has argued that South Africa has failed to act on Russia’s invasion, while the EFF has said that Africa must adopt a policy of non-alignment, and not take sides in the conflict.

The Nelson Mandela Foundation on Saturday called for a “cessation of hostilities and the restoration of peace in the region.

“We have urged the South African government to show leadership at this critical moment and press for a ceasefire so that rigorous negotiations on the future can be mapped out. We have indicated to the government our availability to assist in this regard,” the foundation said.

The foundation noted the complexity of the situation, the “vagaries of international rules of engagement”, and the racism at certain borders.

Statement: The Nelson Mandela Foundation has been following closely the invasion of Ukraine by Russian military forces. We are grieving for those who are losing so much.

“We see the unspeakable danger of nuclear plants coming under attack,” it said.

It made reference to a speech by Nelson Mandela in 2003, where he spoke “angrily” about the failures of leadership and an absence of credible justification when the US and other Western countries invaded Iraq in defiance of the United Nations.

“Indeed, at what point is a country justified in invading another? At play here are notions of the sovereignty of nation-states and the perceived right of such states to act in their own legitimate interests, and their assessment of the benefit or drawbacks of their actions.

It added that it is “imperative that channels for peacemaking, negotiation and dialogue be pursued urgently and relentlessly”. DM