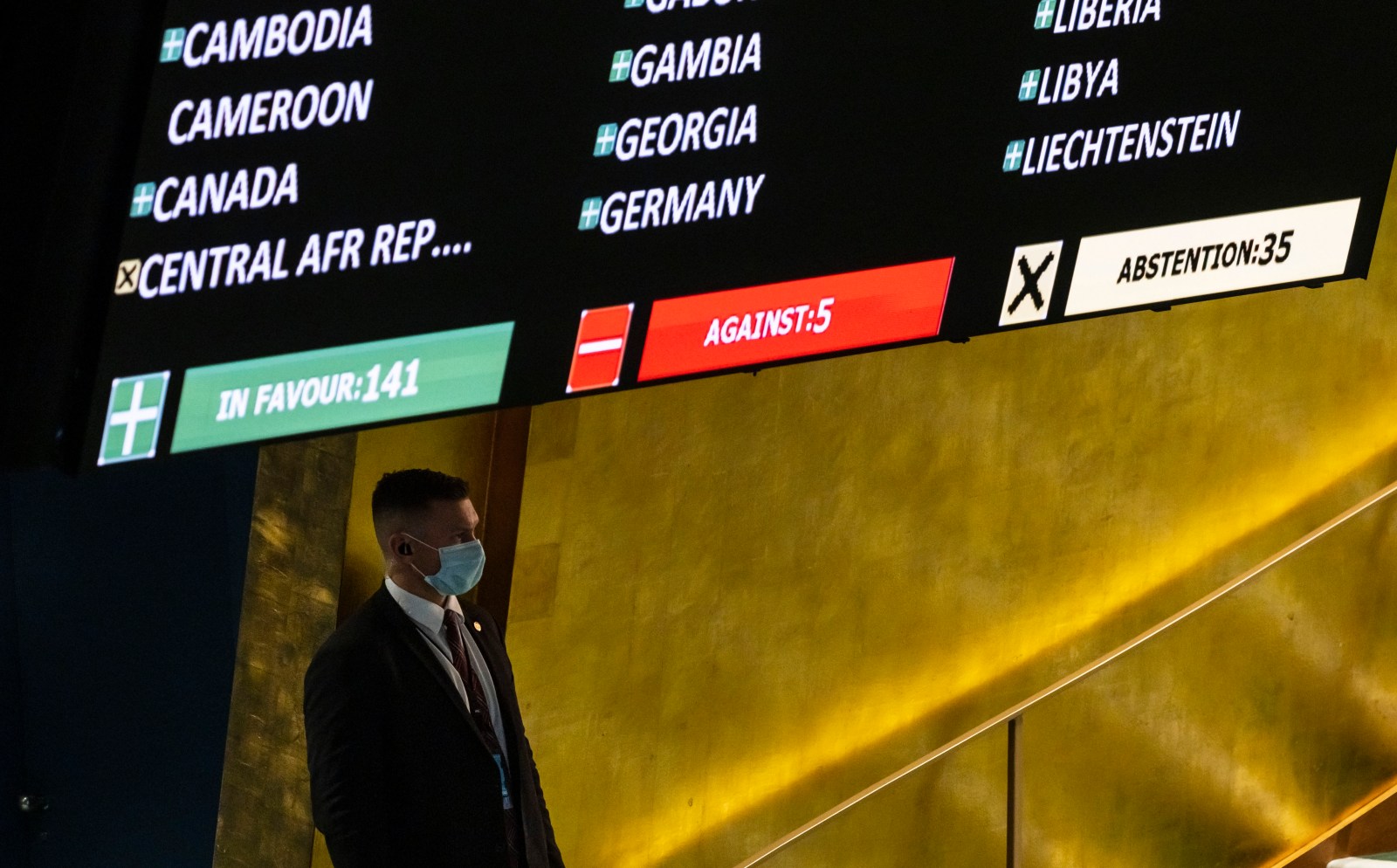 A UN police officer stands under a screen showing results from a vote on a resolution condemning Russia’s invasion of Ukraine during the 11th emergency special session of the United Nations General Assembly at UN headquarters in New York. (Photo: EPA-EFE / Justin Lane)

South Africa has abstained from a United Nations General Assembly resolution condemning Russia’s aggression against Ukraine — which was adopted by an overwhelming majority of the world’s nations.

Pretoria refused to join the direct call in the resolution for Russia to withdraw its forces from Ukraine and to cease its bombardment of Ukrainian cities, despite pressure from Western powers and South African civil society.

“We must do so without ambivalence or double-speak.

“If Russia desires congenial relations with South Africa, it must cease the pursuance of a violent overthrow of its neighbour.

But equivocation is what South Africa’s ambassador to the UN, Mathu Joyini gave in her explanation of the vote on Wednesday. She said South Africa was deeply concerned about the escalation of the conflict and called for a peaceful resolution. But she said that the resolution — titled “Aggression Against Ukraine” — “does not create an environment conducive for diplomacy, dialogue, and mediation” and instead could drive a deeper wedge between Russia and Ukraine.

Joyini said the resolution should have welcomed the commencement of negotiations between Russia and Ukraine, should have given more prominence to the role of the Security Council and the UN Secretary-General in trying to resolve the conflict and should have addressed the root causes of the conflict which were related to the security concerns of the two parties.

Officials explained that this last point referred to Russia’s security concerns about the possibility of Ukraine joining Nato, and more generally to Nato extending its membership eastwards up to Russia’s frontiers. These are believed to be the real reasons for the invasion though Moscow has couched it as a mission to protect ethnic Russians in eastern Ukraine from alleged persecution by the Ukraine government.

Though Joyini did not call for Russia to withdraw from Ukraine and to respect the country’s territorial integrity and sovereignty in her statement in the General Assembly, officials told Daily Maverick that the government statement that Pretoria issued last Thursday, making those same demands, remained on the website of the Department of International Relations and Cooperation and was still valid.

Media reports have suggested that International Relations and Cooperation Minister Naledi Pandor approved that statement, but that President Ramaphosa was “unhappy” with it because he felt it did not reflect South Africa’s true position.

But one senior official source insisted that Ramaphosa had also cleared the statement. “We could hardly do otherwise,” one official said. “Whatever Russia may think, what else could we call this but war?”

All this suggests that Ramaphosa is trying to maintain some sort of strategic ambiguity for South Africa, hoping to maintain the moral high ground on the one hand, but also trying to avoid offending Russia — a historic ally of the ANC in exile and a contemporary ally in the BRICS bloc.

But whether that will be the message that most of the world receives, especially after the vote to abstain on Wednesday, seems unlikely.

South Africa was also in a minority in Africa, where 28 countries voted for the resolution to condemn Russia, only Eritrea voted against and 17 abstained, while eight countries did not vote at all.

The UN General Assembly took up the Ukraine issue because Russia had used its veto as a permanent member to block a similar resolution in the UN Security Council on Friday. The General Assembly resolution has no mandatory force, but its many sponsors believe that the overwhelming majority in favour of it will send a strong signal of global disapproval to Moscow.

The resolution deplored “in the strongest terms the aggression by the Russian Federation against Ukraine in violation of Article 2 (4) of the[UN] Charter” and condemned particularly the reports of attacks on civilian facilities such as residences, schools and hospitals and of civilian casualties.

It particularly condemned Russia’s decision to increase the readiness of its nuclear forces and expressed grave concern at the increasing number of displaced persons and refugees.

The resolution demanded that Russia “immediately cease its use of force against Ukraine” and to “immediately, completely and unconditionally withdraw all of its military forces from the territory of Ukraine within its internationally recognised borders.”

It deplored Russia’s decision of 21 February 2022 to recognize the separatist pro-Russian authorities of Donetsk and Luhansk regions of Ukraine which it said violated the territorial integrity and sovereignty of Ukraine. DM