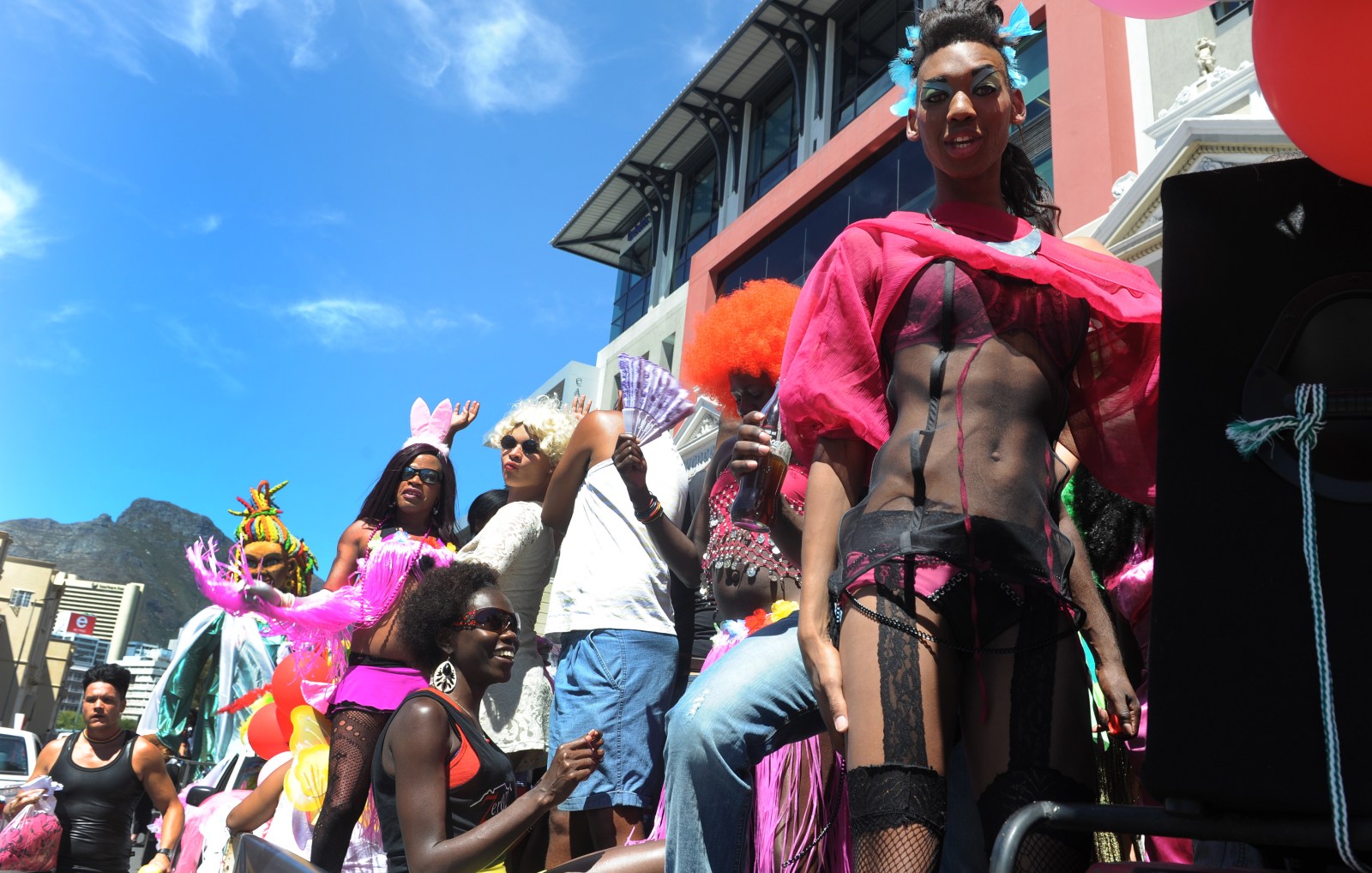 Supporters at the Cape Town Pride Parade on 2 March 2013. The parade started with a minute's silence for South Africans who had died in anti-gay hate crimes. (Photo: Gallo Images / Foto24 / Lulama Zenzile)

Although Pride events are meant to be a time of communal celebration and an unabashed display of queer dignity and self-love, they almost always result in a discussion about inclusivity. Ironically, it’s the reason for Pride’s inception – ‘a reclamation of space and an assertion that we are meant to be here’.

‘I think we never really took to heart what happened in 2012… when the One in Nine Campaign was essentially putting their bodies on the line,” says Letlhogonolo Mokgoroane, a well-known South African social justice activist. “You thought there would’ve been a shift to think politically about what Pride looks like.”

The event Mokgoroane is referring to too place at Johannesburg Pride, when about 20 black queer women obstructed the procession by lying on the road to protest against the lack of inclusivity at Pride, particularly in acknowledging queer women of colour and survivors of sexual assault.

For Kaye Ally, the founder of Pride of Africa, which organises Johannesburg Pride, the notion that the event has not become more inclusive since 2012 is misleading and a product of “mischief-makers”. Ally points out that the organising boards have changed and Pride has evolved.

“I love the narrative that goes out there that it’s a white Pride board that doesn’t cater for the non-white community,” says Ally. “Because the last time I checked I was very much a person of colour. And I’ve been that person of colour my entire life.”

The primary tensions that emerge around Pride have to do with the financial exclusivity of the event, the homogeneous identity of its organisers and attendees, and the very nature of what these events seek to do.

“Every Pride we write the same things, we tell the same stories, it’s almost like desktop research at this point in terms of what the issues are,” says Thozama Njobe, a queer rights activist and member of the Triangle Project, an NGO challenging homophobia, transphobia and intersexphobia.

For Njobe, the issue of Pride is that it is facing a crisis of identity.

“What pride is, is a political statement. It is a moment to really unpack the atrocities perpetrated towards LGBTI people. It’s not a party in Green Point.”

This sentiment is echoed by Mokgoroane, who recalls the historical context from which Pride emerged, when scared masses marched through the streets of Hillbrow chanting, “We’re here, and we’re queer”.

“Pride is not a parade. Pride is a protest,” says Mokgoroane.

If Pride celebrations today are indeed a far cry from their origins, what exactly should they look like?

“It really was a moment to just home in on our issues. To remember the dead. To remember the people who are still excluded, marginalised, dying, who are LGBTI people. And to do better; it was a moment for us to collectively do better,” says Njobe, who adds that they have boycotted Cape Town Pride for more than 15 years because of these issues.

“What does that mean for black trans people who are in the township, who don’t have access to affirming healthcare? What happens to non-binary people who work and are not recognised and are not able to change their gender markers?”

This comment highlights the crux of the controversy that surrounds Pride across the nation, which is that it often caters to an affluent faction of the queer community.

“Cape Town Pride is white, it’s male, and it caters for the economic elite,” says Njobe. “It caters for no one else. And if it did, it wouldn’t be organised the way it is. It wouldn’t be an event of feather boas and floats.”

As Mokgoroane explains, it is important to consider the extent of queerphobia that different intersectional sectors of the queer community will experience. For instance, a wealthy, white, cisgendered gay man will likely experience far less queerphobia and oppression in his lifetime than an impoverished black transgender queer person will.

The location of Pride events is also crucial to inclusivity. Njobe points out that it is near impossible for queer people from Khayelitsha to travel to Green Point to celebrate Cape Town Pride.

The financial inclusivity of these events is another point of contention.

“We should be embracing the fact that Johannesburg Pride is still one of the only Prides in the world that is free,” says Ally. “I think the minute you put a price tag on entry, you already tarnish the dignity of the event.”

Part of addressing these seemingly commonplace issues is structurally re-evaluating how Pride is organised, according to Njobe.

It is in this climate that smaller Pride celebrations in less-affluent areas have emerged, such as Soweto Pride, Tembisa Pride and Khumbulani Pride.

“Class insulates you somewhat from the visceral nature of racism and homophobia,” says Mokgoroane. “It’s really important for these smaller communities [to] host their Prides because they are reclaiming… that’s the whole point of Pride, is the reclamation of space and an assertion that we are meant to be here.”

Beyond Gauteng and the Western Cape, Pride celebrations are less prevalent. Mokgoroane says that, although there are Pride celebrations in Mpumalanga and North West, “people who are in other provinces are really concerned about bread-and-butter issues, so to them having a parade is the last thing on their minds”.

If Pride events are going to progress to a more inclusive state, certain institutions of their events must be dismantled, such as the crowning of Mr and Miss Pride at the Cape Town Pride celebration, according to Ally.

These events propagate heteronormative ideals, and unless they can be reformed to cater to the diversity of queer identities, “Mr and Mrs [Pride] just doesn’t fit that bill”.

In Mokgoroane’s view, the queer community and Pride organisers need to begin by listening to each other’s needs.

“I don’t even think people are talking to each other,” they say. “People obviously want to party, and there’s nothing wrong with that, but what is going to happen after the partying?”

For Njobe, these community issues are reflective of a broader national crisis, since the queer community is a microcosm of the age-old structural barriers familiar to broader South Africa.

“These issues are systemic within South African society. They’re not special within LGBTI communities.” DM168

Cape Town Pride had not responded to DM168’s requests for comment at the time of publication.