Brixton lights up the right to the city

Brixton lights the way towards a kaleidoscope of city inclusivity 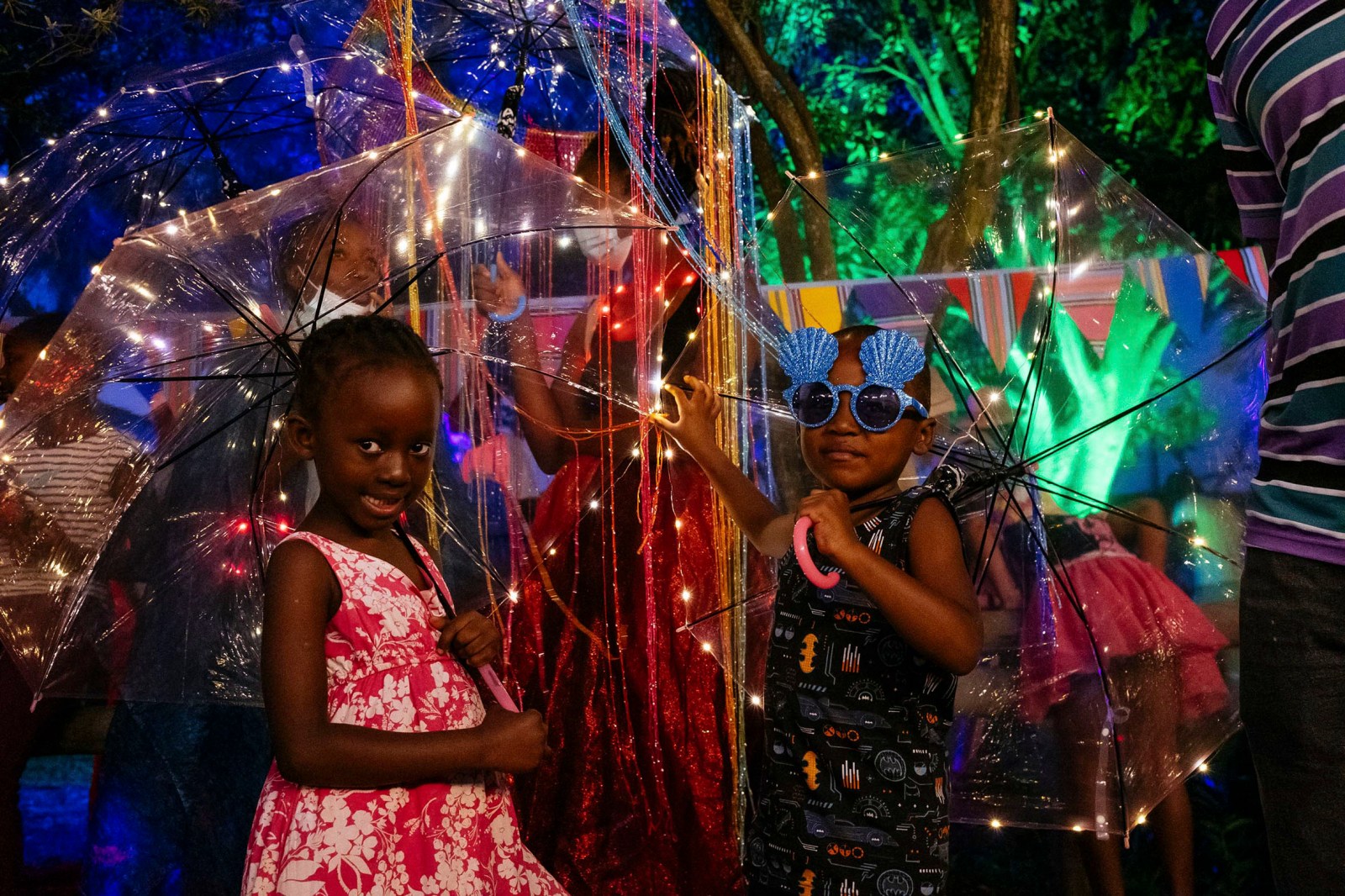 From left, Brixton residents Ayanda Nkosi and her cousin Andile Modisane at the Brixton Light Festival in Johannesburg. Behind them are their mothers Tracey and Primrose Modisane, on 6 February 2022. (Photo: James Puttick)

The Johannesburg suburb’s Light Festival realised — over the course of a day — the magical, equalising and humanising moments that culture can create.

On a Sunday afternoon, a group of volunteers cordon off an ordinary street in Brixton, Johannesburg. They attach flags to palisade fences. Scaffolding appears at an intersection. Colourful paper cups form rings and grow into a baobab tree, lights attached to its branches.

Elsewhere in the suburb, light engineers and artists work away alongside a team of local volunteers. They turn verandas, walls, alleys, reservoir walls, church façades and a children’s playground into stage sets. This is unbeknown to many in the well-acquainted crowd that are starting to gather around the familiar stalls of a Brixton market.

At the stalls, popular local chefs dish up their best. A tireless member of the community forum sells raffle tickets. Printed T-shirts of the event sell out fast. Someone offers popcorn at R2 a packet, another sells wooden craft. A reclaimers’ organisation displays its festive installation of recycled treasures. The ward councillor turns out in a glowing hat, while young and old step out in daring costumes admired by many.

As night begins to fall, the air is pregnant with expectation. Brixton’s landmark Sentech Tower, recently made over with a coat of grey paint, lights up in a gently changing pattern.

A blue ray, skilfully projected from a garage roof, runs up and down her elegant stem. As this draws attention, she blushes a gentle red, shaking this off with a shiver of green lines, before re-dressing herself in a beautiful stripy pattern and finally swaying in a moving flood of polka dots.

An announcer calls for attention as the show is about to start, to excited chatter. A pantsula street performance holds the cheering crowd in its grasp.

Moments later, masked and with attempts to physical distance, a procession sweeps through Brixton’s streets. It swells with new arrivals from the northern suburbs. There was no official advertising; the Brixton Light Festival is an event intended for its residents. Still, social media is abuzz.

The first surprise is a celebrity singing from her neighbour’s roof terrace. The three-storey residence with curved windows is lit from inside, forming a translucent blue pedestal. The crowd hangs onto the floating sounds and moves reluctantly, enticed by cheers of excitement ahead.

At the next corner, the Sentech Tower is in full display, dancing in her changing patterns. In the foreground, an enclosed veranda flooded in yellow light hosts a production of eerily nodding and swaying angels. Across the road, the popular Breezeblock Café is oozing a mysterious red fog.

In a grimy street with trucks and rusty machinery, a delicate light-and-shadow game activates the Greek Orthodox Church façade. Around the next corner, non-governmental organisation Iranti’s new headquarter is aptly livened up in the colours of difference.

Hemmed in by the neglected rear ends of outhouses and garages, an alleyway serves as an art gallery. The crowd pushes past recently painted murals, side by side with the more ephemeral collages, posters and enlarged photographs, all overshadowed and contrasted by Brixton’s sturdy and iconic water tower, its architecture of beams and arches accentuated by blue light.

The graffiti-covered wall and concrete fencing of the Brixton Reservoir forms a second stage, set in a pool of purple light.

But the crowd is drawn in the opposite direction, where a mass of spectators is cheering two artists into a frenzy. They’re performing in front of the spectacularly lit façade of the NG Church.

By now, the crowd has doubled, tripled and quadrupled, not only with visitors but locals from all corners and walks of life in Brixton, many not on the community WhatsApp groups that announced the event. A decade ago, the census revealed Brixton as a demographic and socioeconomic microcosm of Johannesburg in its entirety.

A brass-and-marimba band and a sweeping dance performance enchant the onlookers. The Sentech Tower in her changing dress hovers over a backdrop of tree trunks and branches lit up in red. Shadows of the artists project onto a canopy of leaves.

Up the slope at the steel-framed swings and jungle gym, yet another crowd forms around an agile dance production. It’s now close to 9pm. Brixton’s children are holding onto this moment in their very own playground, rubbing their eyes and pinching themselves to check they aren’t dreaming.

In the following hours, as visitors leave, cellphones heavy with video clips and pictures by which to relive the magical evening, the gentle sound of music and the voices of the dismantling team drift into Brixton’s homes. The tower continues to wink through windows in the magical costume she will only take off in the early hours of the morning.

Demanding to be different

It seems too good to be true. An ordinary neighbourhood turned temporarily into a centre of action and attraction, demanding to be different, turning itself into a stage set for encounters with the most exquisite, yet seemingly anonymous, art. Private and public spaces appropriated for pure and uninhibited enjoyment.

Whether by accident or design, the festival organisers did not audibly announce or visibly display artist or sponsor names. There was no place for egos, and for one evening, space-defining capitalism, with its often boldly branded surplus the benefactor of arts, stepped aside.

There were no physical barriers to crime. For one evening, criminals who normally own the streets after dark will have mingled in a magical, equalising and humanising crowd.

This is the city as an oeuvre or work of art. Built form and society defamiliarised and momentarily reassembled, for one evening tied into an enchanted entanglement.

Identifying a deep human yearning for creative involvement in the neighbourhood and city, 20th-century philosopher Henri Lefebvre incorporated the oeuvre, appropriation and difference in his now-famous idea of a right to the city.

Lefebvre’s notions of festival, art, rhythm and centrality, activated from below as witnessed in Brixton, have a key role to play in breaking down the monotony and the social and physical barriers of the apartheid and capitalist city. They can energise ‘city-zens’ to dream, believe in and actively live towards what Lefebvre liked to call the impossible possible. DM168

Marie Huchzermeyer lives in Brixton and teaches at the School of Architecture and Planning at Wits University.