Ton-up for Erwee on near-perfect day for Proteas in sec... 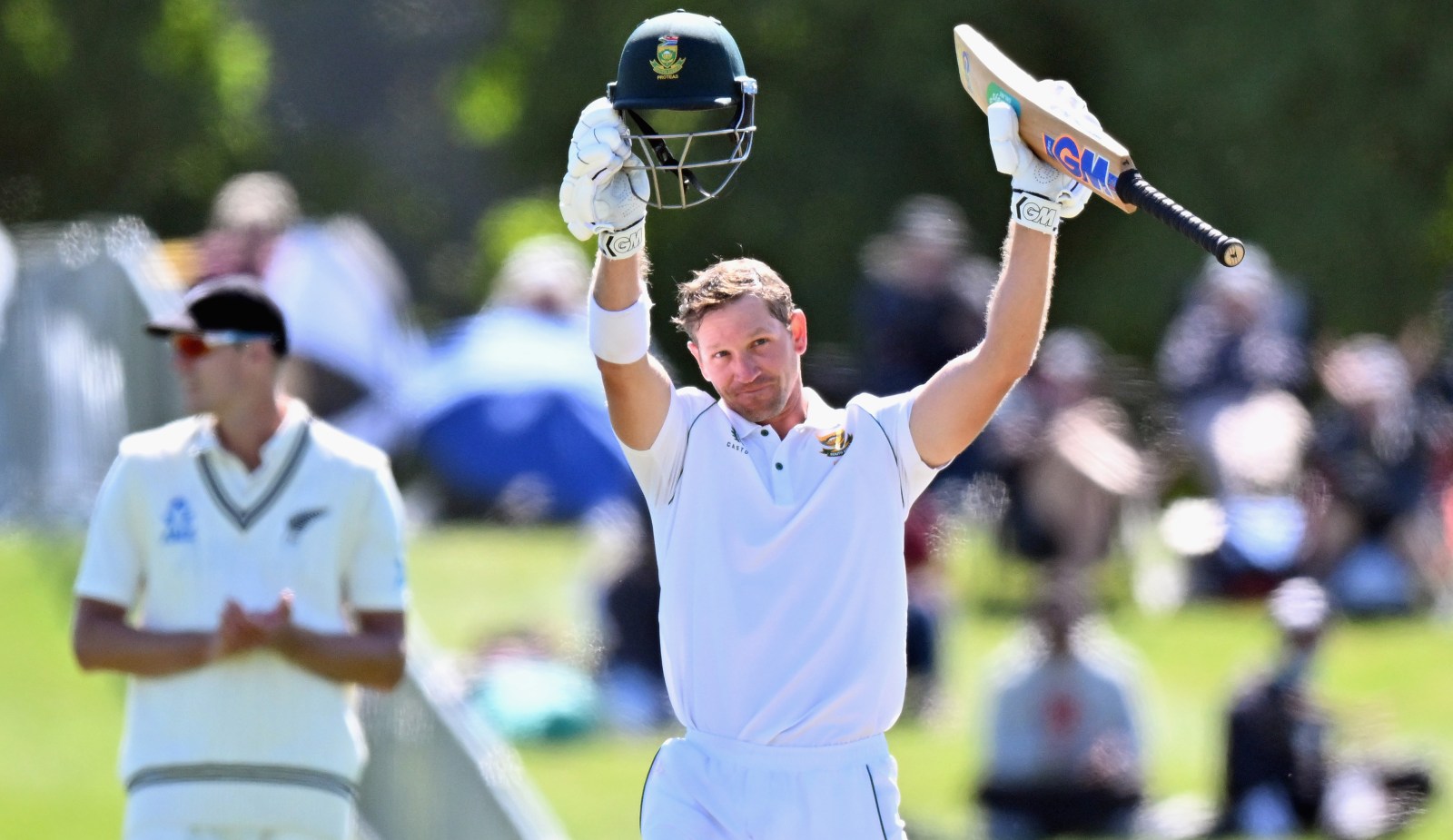 Sarel Erwee of South Africa celebrates his century during day one of the Second Test match in the series between New Zealand and South Africa at Hagley Oval on February 25, 2022 in Christchurch, New Zealand. (Photo by Kai Schwoerer/Getty Images)

The left-handed batsman scored his maiden Test century as South Africa closed day one of the second Test against New Zealand in Christchurch on 238 for three.

What a difference a week makes in sport. Last week the Proteas were smashed by an innings and 276 runs, inside three days in the first Test against New Zealand.

In the early hours of Friday morning local time, they closed day one of the second Test having scored 32 runs more for the loss of only three wickets, than they did in two innings of the first Test.

Left-handed opener Sarel Erwee led the way with a fine 108 — his maiden Test century in his second match at this level. It was a study in application, concentration and skill. His runs came off 221 balls and included 14 boundaries.

It was the cornerstone of collective batting performance that was a complete turnaround from last week when the Proteas were dismissed for 95 and 111.

Captain Dean Elgar deserves credit because after he won his first toss as skipper, he chose to bat. The easy, and to most observers, obvious choice was to bowl.

The Hagley Oval pitch was not as green as the one used in the first Test at the same venue, but the general consensus from the barrage of former New Zealand Test players at the venue, was that it was a ‘bowl first’ wicket.

Elgar, is nothing if not belligerent, and given the Proteas’ team selection with spinner Keshav Maharaj in the lineup at a venue that is usually a seamer’s paradise, batting first was always his preferred option.

Elgar probably assumed if he lost the toss that opposite Tom Latham would ask SA to bat and he knew that if he won it, he would bat. Maharaj will be most effective in the fourth innings, where he, and the occasional spin from Aiden Markram, could be decisive.

For this bold selection and plan to work though, the batters needed to lay a strong foundation and not crumble like a straw building as they did last week.

The skipper led from the front as he and Erwee took guard on off-stump and covered their wickets in a slight technical shift from Test one.

The result was a better judge of when to leave and allow only a small margin for error for the Black Caps’ bowlers. There was the odd play-and miss, but mostly the opening pair saw off the new ball without too much fuss.

One edge each dropped short of the slip cordon, indicating this pitch was not as bouncy as last week, although there was enough in it for the bowlers.

There is no doubt that the 10 days of quarantine and very limited preparation time, took their toll on the Proteas in the first Test. There were far fewer loose shots and lapses in concentration this time around — a sure sign that their focus was spot on.

The opening pair batted through the morning session, going to lunch with 80 on the board. After the break, they took the partnership past three figures. It was South Africa’s first away opening century partnership in an away match since 2012.

Elgar was eventually undone by a ripping ball from Southee that nipped back and took the top of his off-stump. But the skipper’s patient 41 from 101 balls in a stand of 111 with Erwee, set the tone and gave the out-of-form Markram the chance to come to the crease without less scoreboard pressure.

Erwee was on 64 when Markram joined him and the two again knuckled down to ensure that a second wicket didn’t fall quickly. Markram struggled to time the ball early on, and scratched around.

Slowly but surely, the timing returned. He played some sparkling on drives and soon looked like the fluid stroke player that burst on the scene years ago.

But as his confidence returned, so did his aggression and almost inevitably he was dismissed when playing a flamboyant drive to a full, wide ball from left-arm seamer Neil Wagner. Markram probably should have left it alone, but his 42 from 103 balls and dotted with fine shots, was a welcome return to form.

Erwee though, was the hero. He went to his century with a beautifully pulled shot, for four. After a tough introduction to Test cricket a week earlier, he showed that years of toiling in domestic cricket has built a strong mind.

“About 24 months ago, I didn’t think I’d be in a position to be even close to a South African Test squad, so to sit here today with a Test hundred behind my name is extremely special,” Erwee said after the day’s play.

“I think it’s more special having gone through all of the hard yards over the years. You take learnings along those years and it’s been about implementing them with the squad.

“I received huge support when I sat down with my family and my parents picked me up. They helped me see a sports psychologist and we worked through that rough spot daily.

“It was a hard slog to try and get motivated again and to give my best after wanting to give up. The slogging at the lower levels felt worthless and pointless at some stage.

“I was very fortunate to have worked with a sports performance psychologist and my parents’ support at the time was incredible.

“It’s been my motivating factor.”

Erwee’s sister Chantelle, who lives on the North Island in Hamilton. Made the journey south for the match and was on hand to see Sarel’s best day.

“It was lovely to celebrate and get that hundred in front of a bit of family,” Erwee said as he choked back some tears.

“My sister is in New Zealand and she’s been through a bit of a tough time here, so it’s nice to have something for her to smile about.”

It wasn’t only her that had something to smile about though. DM