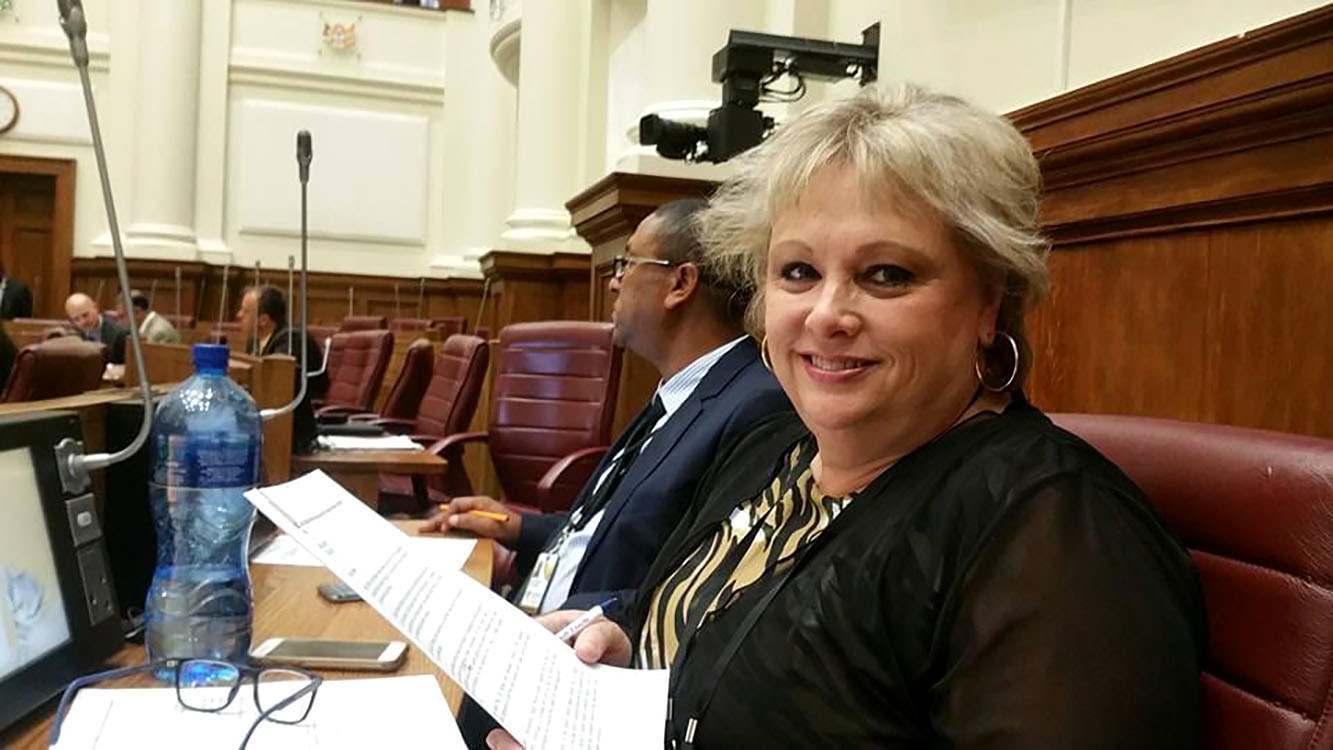 Michéle Clarke recently took over the reins from Siviwe Gwarube as the Democratic Alliance’s health spokesperson and is no stranger to the hotbed of parliamentary politics. Biénne Huisman sat down with her to discuss taking up her new role amid ongoing deliberations on the NHI Bill in Parliament.

Two weeks into her new job as the Democratic Alliance’s spokesperson for health in Parliament, Michéle Clarke’s hands lie interlaced on her desk. A grassroots DA stalwart who honed her political teeth as a councillor on Gauteng’s East Rand, Clarke’s voice and gaze are steady, despite the hot-seat nature of her new position.

Now serving on Parliament’s Portfolio Committee on Health, one of her key tasks is to partake in deliberations on the controversial National Health Insurance (NHI) Bill, with public hearings having recently resumed.

“The biggest issue at the moment in the health portfolio is the NHI and what that would mean for every citizen in this country,” she says. “This is one of the most important bills coming to Parliament in a long time. Needless to say, we don’t support the NHI Bill at all, from a party perspective.”

Clarke’s constituency is Germiston on the East Rand, where she lives with her husband, who works in construction. Proudly, she says that her sister Tania Campbell has served as executive mayor of Ekurhuleni Metropolitan Municipality (which includes Germiston, Benoni, Boksburg, and Kempton Park) since November last year.

“I can tell you,” says Clarke, “in my constituency in Germiston, I visit all the clinics as part of my oversight. I visited a clinic in Klopper Park last week. They haven’t had phones or internet in four years. In four years! If you look at the ‘ideal clinics document’ that government put together — this is the document stipulating what public hospitals and clinics must conform to. Out of 686 hospitals, only six conform. This tells you the state of public healthcare in this country.”

Born on 15 July 1963 at Hillbrow’s now-defunct Florence Nightingale Clinic, Clarke says her own children, aged 34 and 36, were born at a state hospital in Boksburg.

“Both my kids were born under state hospital care in Boksburg, the hospital now known as Tambo Memorial,” she says. “And today, I wouldn’t go there for a sore toe because it is in such bad condition.”

From hot seat to hot seat

As a member of Parliament for the DA, Clarke describes her role as “keeping checks and balances” on the ruling party, and “ensuring that laws passed in Parliament improve the lives of South Africans”.

Having served on the public services committee, where MPs often clash over the state of state-owned enterprises such as South African Airways, Clarke is used to the fireworks of parliamentary politics and has been outspoken on corruption in these SOEs. Her stint in the hot seat with public enterprises is probably what persuaded DA leader John Steenhuisen to put her in another hot seat — health — amid deliberations on one of the country’s most important pieces of health legislation. Clarke has no previous experience in the politics of health.

“So the NHI will be just another SOE,” says Clarke. “That’s exactly what it is. If it goes ahead, we will be in the exact same predicament as what we have with Eskom, Denel, SAA [South African Airways], Transnet. I mean, looking at the Zondo report, it’s shocking what’s happened.”

She says, “So my personality is that I’m very hands-on, very meticulous. I would think I was asked to take over this position following my years serving in senior positions for the party.” She shrugs. “I always give a 100% to any commitment.”

Clarke holds a paralegal diploma, with plans to start a law degree through Unisa this year. “A legal background is very beneficial in our day-to-day work as legislators,” she says.

Her fingernails are short and lacquered in glitter. In her spare time, she reads historical non-fiction. She says recently she enjoyed The Crown by British royal biographer Robert Lacey.

Inside her office — in the parliamentary precinct’s Marks Building — are portraits of her son and daughter, along with several merit certificates and trophies for fundraising.

When prodded about the fundraising trophies, she laughs. “Yes, I’m great at fundraising. I never leave an office without money.”

And fundraising is one of her main concerns relating to the NHI Bill.

“Where will the money come from?” she asks — a question several stakeholders have raised in the ongoing public hearings on the Bill. She cites the National Treasury’s 2021 Medium-Term Budget Policy Statement in which it estimates that implementing the NHI Bill will cost taxpayers an additional R40-billion per year — for the first five years — and perhaps significantly more in later years. This R40-billion will go above and beyond the existing budget for the National Department of Health which, for 2021/2022, is R62.5-billion.

“And what if all this [NHI] money is stolen?” she asks. “The one critical, glaring issue with the NHI Bill is the powers of the [health] minister. The appointment of board members and the committees, the hiring and firing of people — all of that lies with his office.

“There needs to be better transparency because we don’t want to land ourselves in the same situation as Digital Vibes [the R150-million tender scandal that forced former health minister Zweli Mkhize’s resignation], you know.”

After our interview, Clarke is set to attend NHI public hearings from 10am until 8pm. MPs in the health committee are hard at work with the final leg of the public hearings in Parliament. A question she will be raising at these hearings, she says, is what exactly does “credible and capable” governance mean in the context of the proposed NHI Bill.

“They say to sit on the [NHI] board, people would have to be credible and capable. So what does that actually mean? You know, I’m going to actually ask that question today at the NHI hearings. Because as it stands, there are no criteria. We can’t just have more handpicked tjommies and cronies. I mean, I used to serve on the DPE [Department of Public Enterprises] committee. We’ve seen what’s happened with Denel, Eskom, Transnet. And that is all to do with who was serving on those boards. Look at SAA with [former SAA chairperson] Dudu Myeni…”

Asked about MPs toeing the party line in Parliament, she says, “Things are aligned to the ANC outcome and that needs to change. People should be elected into positions based on merit. You should not have to put people in because you owe them a favour. We need to get to a point in this country where we elect politicians that represent South Africa, people who have the skill-set and drive.”

Inside her office, on a cabinet next to a “Top Fundraiser” trophy, is a framed photograph of Clarke with the chair of the DA’s Federal Council, Helen Zille.

Paying tribute to Zille, she says, “Helen Zille would always say, as a councillor you should be a household name in your community. If you are not, you are not doing your job.” Clarke is, however, also quick to point out how she is learning from the DA’s young talent.

Clarke took over from Siviwe Gwarube who is now the party’s deputy chief whip in Parliament and also national spokesperson. (You can read Spotlight’s interview with Gwarube here.)

“I’m very fortunate that Siv [Siviwe] is my colleague and can give me some good guidance until I’m a 100% on my feet,” she says.

Wrapping up, Clarke says that the proposed NHI Bill is in its final phases. “Last week, we had most of the medical aids presenting. Today, there are a number of civil society and union presentations, and then tomorrow the same.” The DA will make its own presentation to the committee in the coming weeks.

“Issues that come up all the time in the presentations that I’ve been a part of are the powers of the minister, the feasibility of the funding, and fixing the current system. We have state hospitals and they need to be fixed. You know, that’s the crux of the matter — to fix the current system so that the poorest of the poor actually have good-quality healthcare. And then, there is the private sector. If this [the NHI Bill] goes ahead, we would have a massive brain drain of healthcare providers leaving this country.” DM/MC