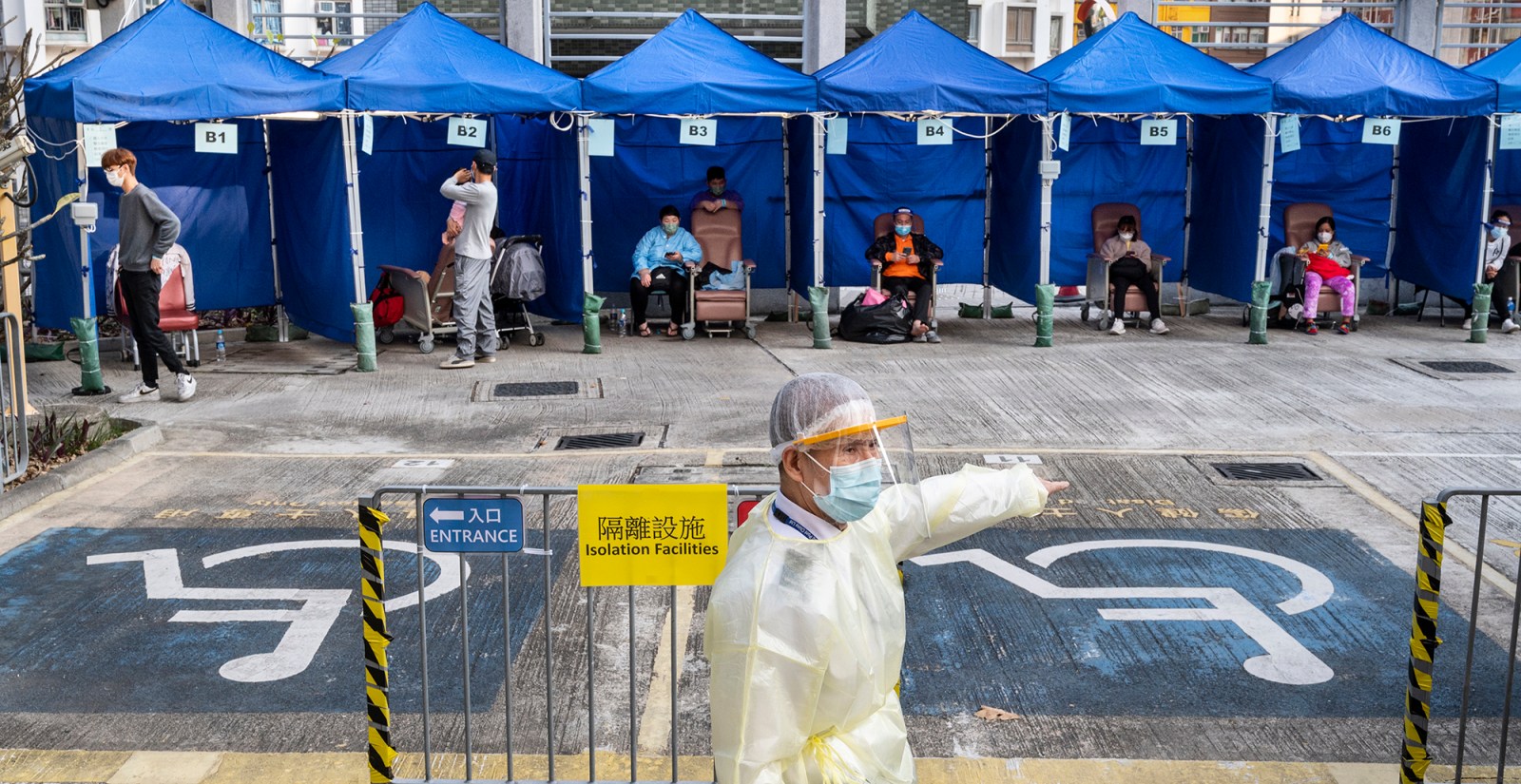 New coronavirus infections in the US slowed to the lowest level since the arrival of the highly contagious Omicron variant in December.

Hong Kong will test its entire population of 7.4 million people three times and maintain strict physical distancing rules in a bid to slow an outbreak that’s now the worst on record for China. The surge has also raised the spectre of a citywide lockdown, a tactic used in the mainland but unprecedented for Hong Kong.

Meanwhile, the Omicron variant has gained a foothold in Wuhan, the central Chinese city where Covid-19 first emerged in December 2019. So far, 14 people have tested positive, marking the first resurgence in the city in more than six months. 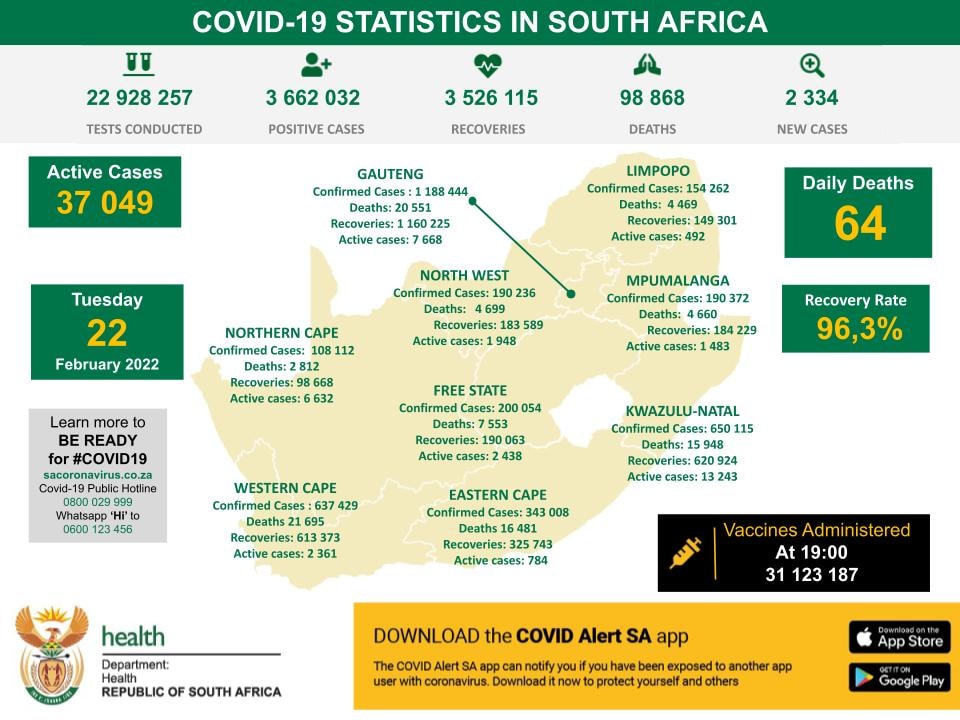 The requests come amid growing concerns that Washington could be the site of disruptions similar to those that have tied up the Canadian capital of Ottawa over Covid-19 vaccine requirements and other public-health measures related to the pandemic.

“No decisions have been made yet to approve these requests,” Pentagon spokesman John Kirby said on Tuesday.

US Capitol Police and other agencies, including the Secret Service and the DC Homeland Security and Emergency Management Agency, are specifically preparing for a potential truck protest timed to coincide with Biden’s March 1 speech.

US cases slow to pre-Omicron level

The US recorded 722,053 new coronavirus cases in the week ended Sunday, according to data compiled by Johns Hopkins University and Bloomberg. That’s the lowest weekly tally since the last week in November, before the arrival of the highly transmissible Omicron variant.

The seven-day average of new cases in the US fell to 89,024 on Monday, the lowest since December 1, according to a database maintained by The New York Times.

Italy will allow travellers from outside the European Union to enter the state quarantine-free as of March 1, according to new rules signed by the country’s Health minister Roberto Speranza on Tuesday.

Travellers from both EU and other countries will still be required to show a green pass, which can be obtained with a vaccine, or after recovering from Covid, or with a negative virus test.

The administration in Edinburgh, which is responsible for health matters in Scotland and run by the pro-independence Scottish National Party, has diverged from Prime Minister Boris Johnson’s government throughout the pandemic, such as requiring the use of face coverings in indoor public spaces for longer. In Scotland’s latest policy document on what comes next, Scotland will also continue to ask people who test positive for Covid to self-isolate, Sturgeon said.

Finland plans to end all pandemic-related restrictions on restaurants as declining case numbers allow a return to a more normal nightlife.

Finland will end all restrictions on trade, opening hours and the number of customers in restaurants from March 1, according to a proposal from the ministerial working group that is coordinating Finland’s Covid-19 response.

New data from Denmark show that it’s possible to be infected twice with two different types of the variant.

Out of two million positive tests since November, 67 people have had both the BA.1., and the BA.2. variant with 20- to 60-day intervals, Denmark’s institute for infectious diseases said in a statement on Tuesday. Of those, 47 first caught the BA.1. and were predominately young and unvaccinated, suffering only mild symptoms.

Denmark lifted all restrictions on February 1 and declared that Covid-19 was no longer a threat to society, despite record-high daily virus cases. The so-called reproduction rate fell to 0.8 on Tuesday, meaning the outbreak is shrinking.

Ireland to end most restrictions

Masks will still be required in healthcare settings, though will only be advised elsewhere. The rules changes will come into effect on February 28, RTE said.

Hong Kong will conduct compulsory testing of its entire 7.4 million population three times in March, deploying a key mainland China strategy in a bid to slow an outbreak that’s pushed the city’s resources to the brink.

The financial hub will also maintain its strict social distancing restrictions until mid to end-April, while a flight ban on nine countries including the US, UK and Australia will be extended to April 20, Chief Executive Carrie Lam said Tuesday, announcing a raft of anti-pandemic measures. 9.

Hong Kong isn’t considering a total lockdown currently, though there may be localised measures, and the central government hadn’t given instructions to the city, Lam said. Bloomberg News reported on Tuesday that Chinese officials have told Hong Kong they think a lockdown will be needed.

European Union member states should allow non-essential travel for vaccinated people, recovered persons and all persons travelling from a country on the EU list from March 1, according to an updated recommendation from the EU Council.

Omicron flares up in Wuhan

Omicron has gained a foothold in Wuhan, the central Chinese city where the coronavirus first emerged in December 2019.

So far, 14 people have tested positive, and authorities confirmed that infections – among those travelling from other regions and their close contacts in the city – were caused by the variant. The new cluster marks the first resurgence of Covid-19 in the city in more than six months.

Germany needs to push ahead with mandatory Covid-19 vaccination as it has a relatively high proportion of vulnerable elderly citizens who aren’t immunised, according to Health Minister Karl Lauterbach.

Lauterbach told public broadcaster ZDF that the Omicron strain or a “more dangerous variant” is likely to take hold in the autumn and that could trigger tighter contact restrictions that other countries with higher vaccination rates probably wouldn’t need. Germany’s lower House of Parliament is due to begin debating a general vaccine mandate next month.

The worsening Covid outbreak in Hong Kong is likely to claim more than 3,000 lives by the middle of May, according to a forecast by a team of medical professors and health data experts.

Daily infections are likely to peak at nearly 183,000 in early March, before gradually dropping to around 400 by mid-May, an updated forecast from the Laboratory of Data Discovery for Health and the University of Hong Kong’s WHO Collaborating Center for Infectious Disease Epidemiology and Control showed. Deaths would peak at almost 100 a day in late March, with cumulative casualties hitting 3,206 in mid-May, according to the analysis released on Monday.

The number of passengers using Dubai’s main airport should double this year as borders reopen, though a recovery to pre-Covid levels may take until 2024, the chief executive officer of the Gulf hub said.

As the protest in downtown Wellington entered its 15th day, police said three officers were taken to hospital for a medical assessment after being sprayed with a stinging substance that is still to be determined.

“The attacks on police have been absolutely disgraceful,” Ardern told reporters. “Clearly there is a group who are increasingly acting out in a violent way toward the police.”

Thailand raised its Covid alert level to the second-highest on Monday following a surge in new daily cases and deaths. Alert Level 4 advises to avoid group gatherings, visits to places at high risk of infections, physical distancing and work from home as much as possible to help stem the outbreak, the health ministry said in a statement. It expects new cases to continue to rise in the next one to two weeks.

Thailand has seen a spike in infections in recent weeks, with the daily case count staying above 18,000 for a fifth straight day on Tuesday. Authorities reported 37 Covid deaths in the past 24 hours, the highest since December 17.

South Korea’s Parliament passed a larger-than-planned first extra Budget of the year as the government tries to shore up parts of the economy worst hit by the country’s biggest coronavirus outbreak of the pandemic.

The 16.9-trillion won ($14.2-billion) Budget, approved by Parliament late on Monday, is aimed at compensating losses to businesses that have been labouring under some of the strictest conditions since Covid-19 erupted, as virus cases rose from thousands a day to more than 100,000. DM/MC