Meet the artist behind the hooded figure haunting the s...

WORD ON THE STREET

State of her art: Meet the artist and activist behind the hooded figure haunting the streets of Cape Town 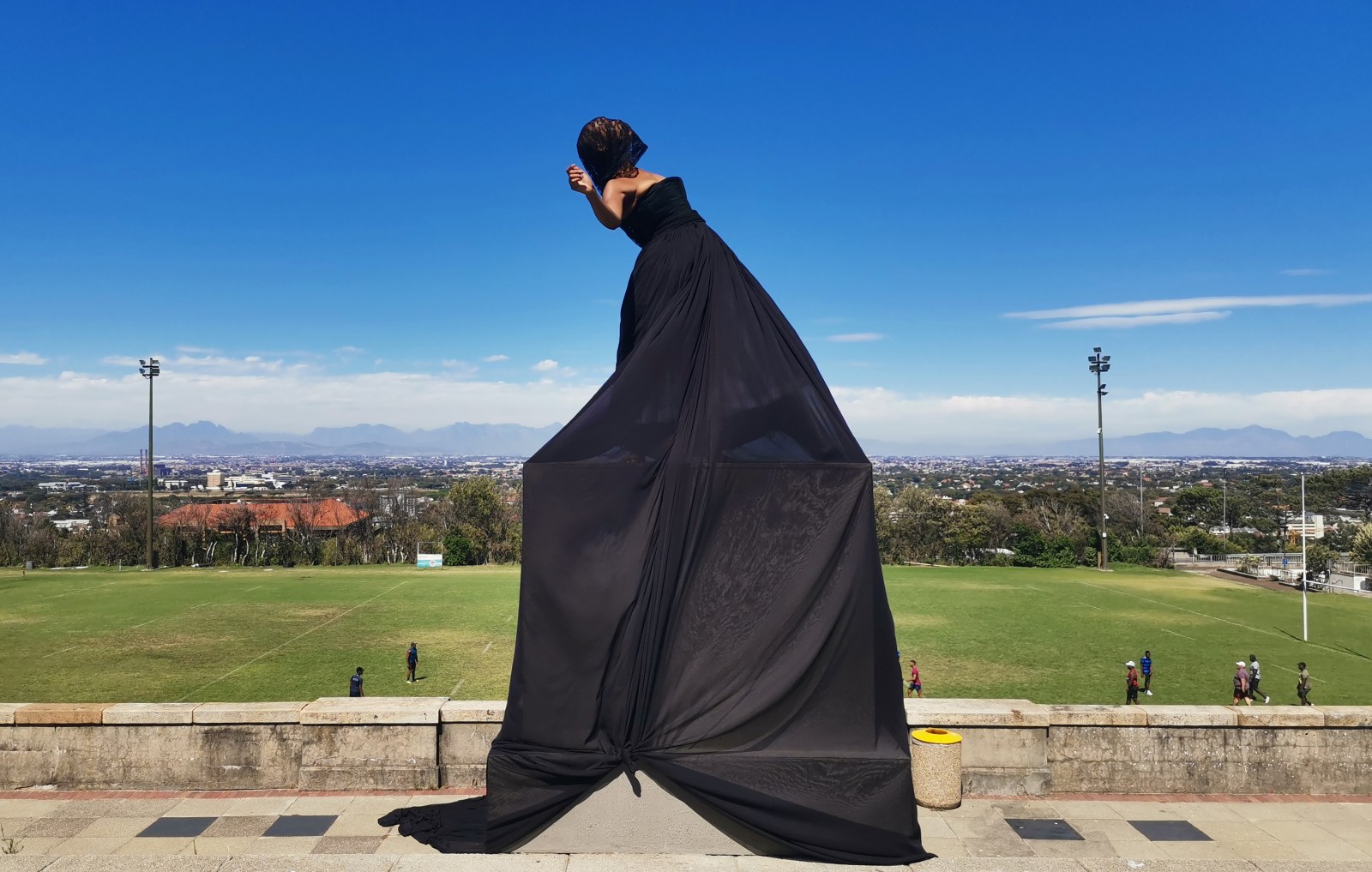 Qondiswa James says she’s moved by how the public reacts to her and her public performances, which she describes as ‘an intervention’.

While President Cyril Ramaphosa was preparing to deliver his State of the Nation Address (Sona) on 10 February, a woman stood not too far from Cape Town City Hall, in a black dress and a black veil, crying.

The woman was Qondiswa James, an award-winning theatre-maker, performance artist, film and theatre performer and activist, who has done this plenty of times across the city for her master’s degree in live art and interdisciplinary and public art.

Over three months in 2021, James performed in various places in Cape Town – from Philippi to Sea Point – dressed up as 12 characters you could find in a community, from a nurse to a sex worker.

She didn’t get any money for these performances since they were a requirement for her master’s degree. James makes her living as a theatre director, and her work includes Emhlab’Obomvu, Silindile and A Faint Patch of Light. She is also an actor and has performed in The Foxy Five, High Fantasy and Into Us and Ours.

James described her public performance as “an intervention”.

“I’m not militant, I don’t want to pick up a gun and kill people. I’m also not a politician; I’m not interested in selling lies. I’m not a lawyer – I don’t know how to figure out how to help people getting evicted or whatever. I’m not a city planner, I’m not a housing specialist. I don’t know how to do those things, but this is what I can do. I’m interested in how I am existing in this world where things are happening. How am I existing and doing my part, understanding that there are many things that I cannot do?”

“This shadow,” as James describes the hooded figure, has struck a chord with a number of people. For her degree, she called the eerie piece The Haunting. It refers to the slaves who have been buried in different parts of the city and how they haunt the city.

“It’s not like there isn’t something that’s haunting this entire cityscape. My projects, in general, have been about haunting the city with familiarity to see if people would recognise themselves,” she explained.

“I don’t know what the work is about, but I am f*cking enraged. I am appalled. I am disappointed. I am in mourning constantly for the dreams of our people that can’t be made manifest,” she said.

The performer says she has repeatedly been asked what she hoped to achieve.

James, who is passionate when she talks about her work, makes it clear that her opinion is the least important thing to her – what matters is what the public think of it.

As she was standing on Darling Street, ahead of Sona, a man started narrating James’s intervention. “It was organic and beautiful. He started saying: ‘We hear you. Cry. We’re crying. The mother of the city is crying. You’re inside having a party, congratulating yourselves; we’re outside crying.’ He then started chanting, ‘We want to be free’. People joined the chanting. Then it quietened down and a sister picked it up and started saying, ‘This is for us. Yes, cry, sister’. She started naming all these women who have been murdered. Then she and other women start forming a circle around me.”

She said she was moved by how the public had reacted to her intervention.

“People were narrating what they were feeling, which is also why I can’t claim what it meant. We made meaning there together. I went and I stood and I wept because I know what I am in pain about.

“Why are people so concerned about what I think? People are telling us what it means. That’s much more interesting. It’ll be even more interesting to me if people started popping up and not necessarily in a black shroud, but that this becomes part of the way that we can speak back at [the state] but also speak to each other,” she told DM168.

A TikTok video from the day shows two police officers removing James from the brown stool she had been standing on. Some social media users thought she had been arrested, but she wasn’t. After the women had formed a circle around her, the police asked her to move, saying she was “an obstruction”.

The hooded figure has also appeared at the University of Cape Town, on the empty plinth where Cecil John Rhodes’s statue stood from 1934 until it was removed in 2015 during the Fees Must Fall protests. In 2020, James stood on that plinth for six hours. Although this may seem extreme to some, James’s art practice is focused on two things: risk and endurance.

“I’m interested in the body at its limit to express that we are at our limit,” she said.

When it comes to risk, James said she does not want to be arrested. To ensure this doesn’t happen, James often has “a co-conspirator” with her. Her companion films the intervention and checks to make sure that they’re safe.

But how does one prepare for this kind of physically and emotionally demanding work? “It’s about trying to keep my mind right. For the most part, it’s about body preparedness. If my body is prepared, I can trust the vessel to hold where my spirit needs to go.” DM168

A picture of Solange looking like Catwoman, with the text “protecting my heart and my pussy”.

I’d go thrifting at the train station in Mowbray.

What’s the one thing you wish you’d learnt earlier in life?

I wish I understood earlier the systemic matrix and the power dynamics at play; now there’s so much more to unlearn of the conditioning.

Three books that affected your life?

As Black As Resistance by Zoe Samudzi and William C Anderson; One Day I Will Write about This Place by Binyavanga Wainaina; and The Coming Insurrection by The Invisible Committee.