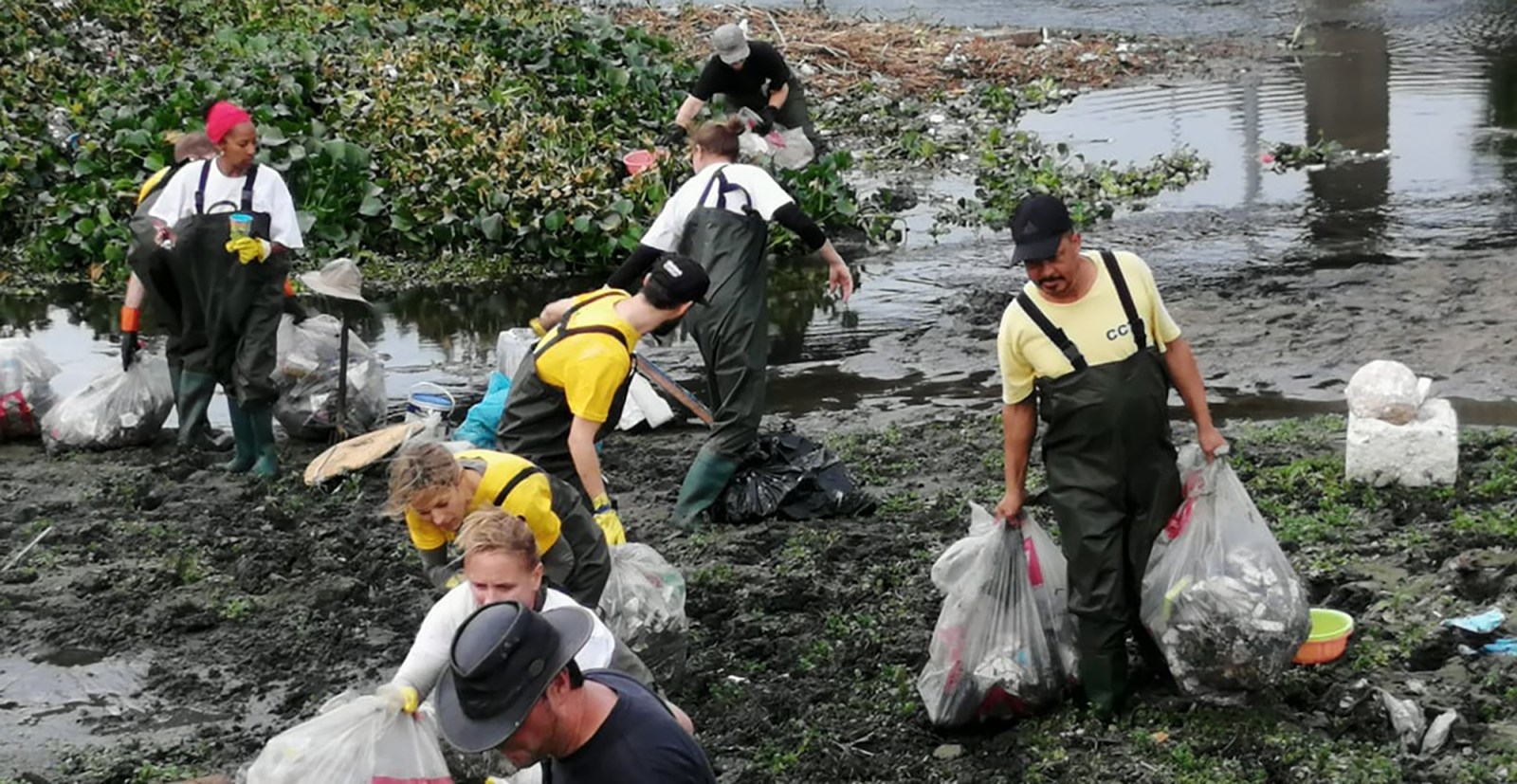 Georgia McTaggart became the change she wanted to see by starting an organisation to mobilise volunteers to clean up Cape Town’s dirty waterways.

‘Compassionate disruption” is the motto Georgia McTaggart and her volunteers use for their waterways clean-up organisation, Help Up.

McTaggart started Help Up after struggling on her own to clean up the Black River in Cape Town in 2018. She mobilised the homeless community and paid them about R20 an hour out of her own pocket. As the organisation has grown, the fee has increased to more than R50.

For McTaggart, cleaning the river was all about “compassionate disruption”; identifying a situation — in this case, the poor state of the Black River — and then finding a solution to bring about the change that’s needed.

“The whole point of it is consistency. The point is kind of driving that compassionate destruction, and saying, ‘Wow, this is amazing; look at what these people can do, look at what you can do, don’t you want to do this?’ It’s encouraging people to take a look at their neighbourhood and say, ‘I want this to be beautiful’,” McTaggart told Daily Maverick.

Help Up has grown from when she started with a few homeless people from Observatory. With the help of a crowdfunding campaign and a partnership with the City of Cape Town to remove the collected waste, Help Up now has several franchise clean-up operations running.

One of the areas where Help Up has proved beneficial is the Jakkalsvlei canal in KwaLanga. Previously, the group had been cleaning the heavily polluted Black River, but they soon realised that most of the waste ending up in the river was coming from the Jakkalsvlei canal. McTaggart then redirected her efforts to the source of the problem.

Since the Covid-19 pandemic, McTaggart has sought to make the programme more accessible, viable and sustainable by getting the teams to work in the areas in which they live, to improve their environments.

Sinethemba Qaka (33) lives in KwaLanga. He told Daily Maverick that he began cleaning up the Black River after he saw others doing so during weekends and decided to pitch in. He has since learnt a lot about how aquatic life is affected by pollution. Qaka has started his own clean-up programme, under Help Up, at the Jakkalsvlei canal.

“I associated myself with Help Up because I know and understand the importance of a clean environment. Seeing the situation we have caused by staying in shacks… we throw away dirty objects in the canal, including human waste. And that waste sits at the bottom of the canal. I decided to help because what we were doing as residents was appalling,” Qaka said.

Safety gear and equipment for the volunteers is provided by the organisation to ensure minimal exposure to toxins from the pollution. Clean-ups are also limited to about three hours per session to ensure the sustainability of the programme.

McTaggart said despite criticism that clean-up groups only make a difference at a surface level, they do collect waste from the river bed. A lot of the waste, she said, doesn’t float.

Much of the waste consists of disposable nappies, which is also a health issue, said McTaggart. Other items found along or in the canal include plastic packaging and metal containers, all of which negatively affect aquatic life and the surrounding biodiversity.

Each week, the teams collect about a ton of waste at their different locations.

“If you don’t collect that, what happens is the plastic breaks down in the sun… makes it brittle and creates microplastics which then float on the surface of the water and end up in the ocean,” McTaggart said, adding that the microplastics form a film over the surface of the water and restrict light from penetrating, which has a knock-on effect on photosynthesis and the release of oxygen.

About 50% of the Earth’s oxygen comes from oceans and is produced by plankton, which consists of plants, algae and photosynthesizing bacteria — the oxygen is needed for the survival of marine life. The film can cause hypoxia (low oxygen), creating a dead zone that uses up more oxygen for the decomposition process than it produces.

McTaggart said she had also seen how the pollution has negatively affected birdlife, with birds ingesting the decomposed waste and either dying of starvation or poisoning.

Eli Zimri, senior foreman at the council’s north Maitland depot, collects the waste from the weekly clean-ups. He told Daily Maverick that Help Up does a lot to keep the waterways clean.

Zimri said he met McTaggart at a Black River clean-up and now regularly sends a truck to collect dozens of bags of trash picked up by the volunteers. There are many discarded two-litre plastic bottles which, McTaggart said, were often coated in human faeces and unable to be recycled.

“Help Up keeps our oceans clean, especially after a storm or heavy rains. All rivers flow to the ocean… in some places we have a net that prevents the litter from getting into the sea, and that makes it easier for a team to collect it at that location,” Zimri said.

“All of us can lead by example. The city will be a cleaner place if all of us take responsibility and stop littering. They should think about all of the animals that they kill in the ocean,” Zimri said.

McTaggart says it is this collective effort that keeps the organisation going.

“It’s all done with care and consideration throughout the entire process, and it works because of that.” DM/OBP

Find out more about Help Up via email, [email protected], or Twitter, @HelpUp_Today.