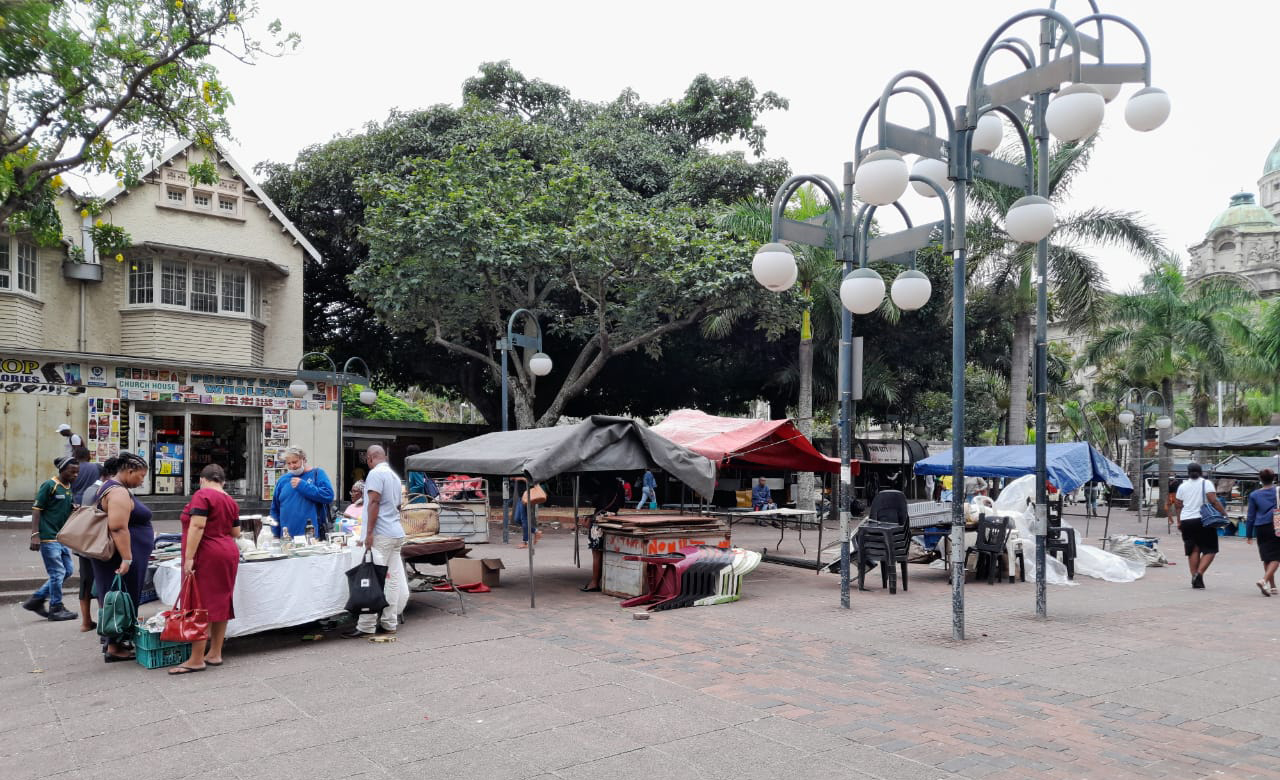 Immigrant traders say they have been prevented from occupying their spots at markets in Durban after being chased away more than a year ago. (Photo: Nokulunga Majola)

Neither the metro nor KZN Premier has intervened since foreign permit holders were forcibly evicted from their designated trading spots.

It’s been more than a year since foreign nationals were threatened and chased away from trading spaces at the Workshop and Soldiers Way in Durban.

While traders believe the attacks were allegedly led by members of the uMkhonto weSizwe Military Veterans Association (MKMVA) the group has distanced itself from the attacks on immigrant traders in Durban.

Immigrant informal traders say they are struggling to make ends meet because they relied on selling their goods as their only source of income. Many people we spoke to, some of whom have been trading with permits for over a decade, said they had met senior managers of the Business Unit in the City to resolve the matter but to no avail. They also claim that their trading spaces have since been forcefully taken over by South African traders.

They are now pleading for the City to intervene. Mekebe Kelembe, who has been a barber in a tent on Soldiers Way since 2012, said he was first chased away from his trading spot in November 2020. “When I returned in February 2021 I found someone else there and I was told it’s no longer my space. I renewed my permit in January 2022 because I’m afraid that if I don’t renew it, it will be cancelled,” said Kelembe.

“The situation is really bad, we have to pay rent and buy food,” said Kelembe. “I asked people from the municipality why we are renewing our permits if we cannot trade but they say they cannot do anything as the situation is above them.”

Another trader, Tambi Rubanguka said he was beaten and his stall looted in February 2021. Since then he has not been able to return. “I tried once but I was chased out. We are scared to go back there. We paid for our permit. Therefore it is the City’s responsibility to protect us,” he said.

He said their trade permits only allowed them to work in designated spots, so they have been stuck without options to sell their goods legally.

Smith Hartey Enabebholo, chairperson of the foreign national traders group, said he, like many other immigrant traders, cannot buy food or pay rent. He has already received an eviction notice because he has missed payments on his bond.

He said that he started trading in 1999 at the Workshop when it was still privately owned before the City took over. Enabebholo, who has South African citizenship, questioned why the City is not assisting those operating within the law. “The municipality has its own law enforcement that is supposed to protect people who are trading legally and have permits,” he said.

Secretary-General of the African Solidarity Network (Asonet) Daniel Byamungu Dunia said they have met with the eThekwini mayor and KwaZulu-Natal premier about the attacks on immigrants. “They promised to intervene but nothing has been done. We want people with permits to be allowed back to continue trading,” Dunia said.

Themba Mkhize is a member of the Concerned Informal Vendors, an organisation representing South Africa traders. He said problems started in 2015. Currently, all traders at the Workshop are South African, compared to a year ago when over 100 foreign nationals occupied trade spaces, he said. He accused City officials of selling spaces to immigrants.

When GroundUp requested a comment from the office of the Premier, we were referred to the City. When questions were sent to the City earlier this week, the City in response told GroundUp to advise immigrant traders to report incidents of intimidation and harassment to the police.

On Thursday we asked KwaZulu-Natal police spokesperson Captain Nqobile Gwala whether SAPS was aware of any xenophobic attacks or cases related to the attack on foreign nationals. Gwala responded by asking GroundUp to instead provide her with specific cases and to then forward our further questions to their general media email. DM