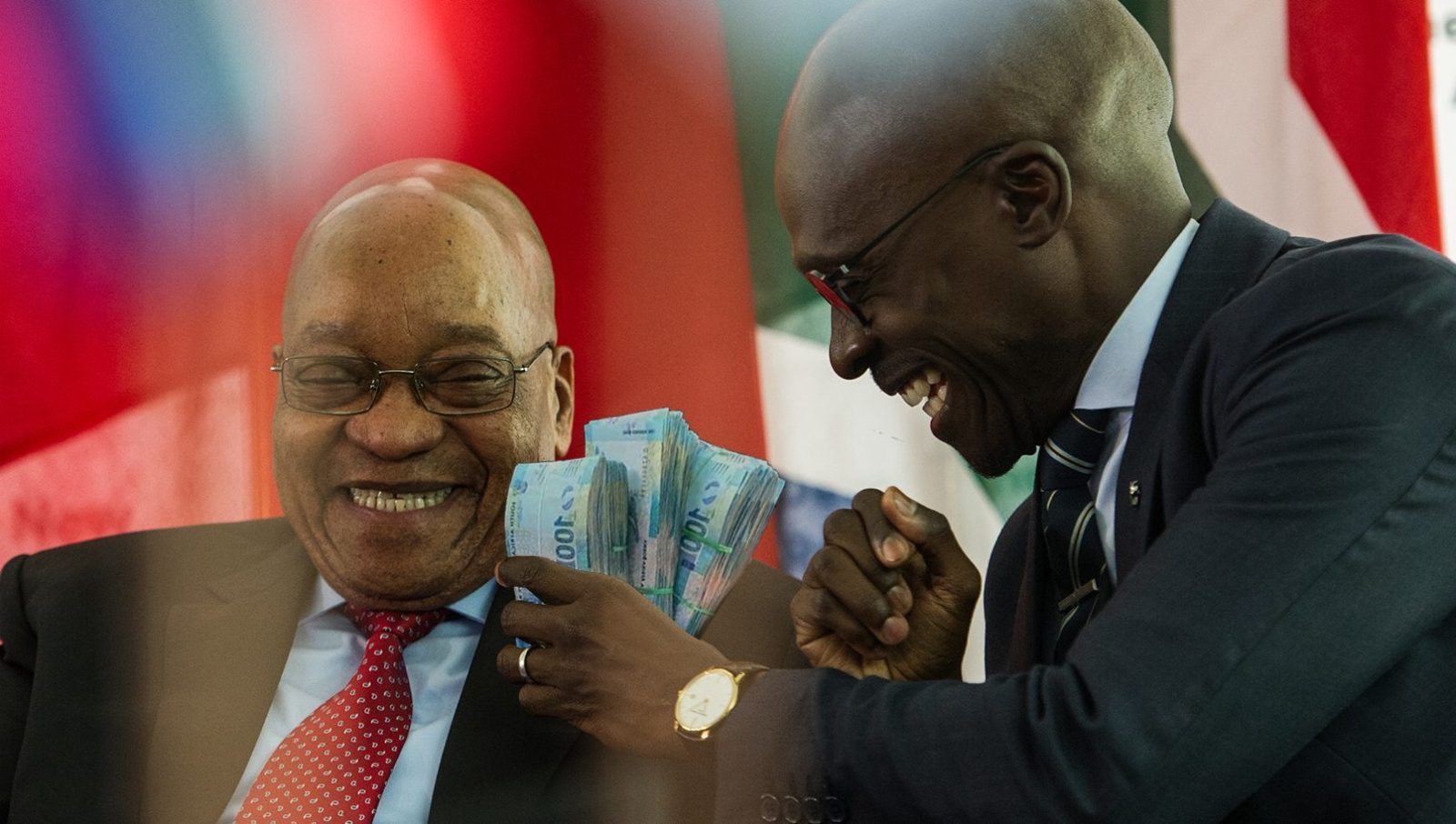 Image design: Maverick Life. Original image: Then minister of finance Malusi Gigaba and then president Jacob Zuma on 17 August 2017 in Johannesburg, South Africa, at the opening of the Africa Regional Centre for the New Development Bank is held in Sandton. (Photo by Gallo Images / Beeld / Wikus de Wet)

These are challenging times for journalists. We need to pimp up our game and learn to punch far above our weight, as it were. Who better to guide us than the man who has led some to lucrative occupations far beyond their capabilities?

I trust this email finds you vaccinated, caffeinated and freshly masturbated.

Please allow me to introduce myself. I am a life and culture writer, and an accomplished Instagram Story filmmaker. I currently work for a media organization, where I’m often surrounded by what you called “journalistitutes” in one of your recent tweets. LOLz, I do love a good portmanteau; how very clever and original and witty of you Sir; it’s almost as good as that other one that was often directed at my colleagues during the excitement of the Bell Pottinger era, 2017’s “presstitutes”.

Just between you and me, even with all that presstitution, these people still dress like crap. Methinks they either need to find ways to presstitute themselves at higher prices or find a better class of pimp to market their services. Perhaps this is something you might be able to help us with. Some might say that you would know better than most what the going price is for one’s soul, #PimpinAintEasy. But I’m getting ahead of myself; let’s park it for a moment.

Over the past year, I have written to some of your former colleagues in government, as well as your fellow NEC members to offer my services as a skilled and multi-disciplinary storyteller. I have asked our spiritual leader, Papa Zuma, to allow me to tell his story; I have implored our president to let me create the inaugural parliamentary Oscars; I’ve emailed Masta Ace Magashule a proposal for what I thought would be a brilliant and potentially lucrative hip-hop mixtape concept: My Foot on Your NEC; and in a moment of blind desperation, I even asked John Steenhuisen for a job as part of his communications team. Alas, I have yet to receive a response. Understandably, most of the people I have written to are currently employed and most likely very busy, so I now turn to you.

I recently read through the second instalment of the rather lacklustre Zondo Trilogy, and Sir, I must say, your good name is being dragged through the mud. To be perfectly accurate, because journalistitution demands it of me, I must admit that I didn’t actually read it. I am more of an audiobook kinda guy, but, some of the journalistitutes at the office who seem to have a lot of time on their hands have read through it and published little plot summaries, which I skimmed through.

I’m all about bodily autonomy, so as far as I’m concerned, however one wishes to profit from their body, and whatever pimping agency they choose to sign up with, is their business. But Zondo’s framing of your honourable self as South Africa’s Pimp-in-Chief goes a touch too far for my liking. Based on the latest instalment, ever-gullible South Africans might actually believe that you pimped out South Africa and the future of our people for generations to come, in exchange for a bit of swag during your time as Minister of Public Enterprise.

You are accused of intentionally weakening “the governance structures of Transnet and Denel by appointing executives and board members who were closely aligned with Zuma, members of the Gupta family and their business associates.” Word on the street is that the third and final instalment will allege your wilful contribution towards the destruction of Eskom and SAA as well. Some are even calling you the Chief of Staff of the State Capture project, alleging that you oversaw the hiring of corrupt incompetents at the highest levels of these state-owned enterprises.

Please know that you have a friend in me, Sir. I absolutely refuse to take Zondo’s defamatory musings seriously. I am a huge believer in the power imbued in our birth names. Hence I choose to see you as the dreamers who named you saw you, as uMalusi. In fact, all your names are a reminder that you were named for destiny: Malusi [shepherd] Knowledge [ulwazi] Nkanyezi [star] Gigaba. Not a single one of those names suggested that you would one day grow to pursue the pimpological arts at the highest levels of government; that you would make our country your ho.

My own parents gave me just the one name, Malibongwe, which I’m sure you know means “give praise to…”. In their case, of course, it was about giving praise to God. Bless their humility and efficiency. Just a simple nod to the heavens for the birth of their first child; as for the rest, que sera sera, let go and let God. Naturally, I’ve grown into a rather militant atheist. Blame it on the vagueness of purpose in my given name.

But not so for you Sir, the Fates walk with you; your destiny was laid out right there on your birth certificate, to be that shining star, that well of knowledge, that shepherd that leads your people to the promised land. In fact, this brings me to the reason for my email; I would like to ask you to consider working with me towards putting together a Masterclass to guide my aforementioned colleagues in a couple of important matters.

Our field would benefit greatly from the many insights you’ve gained in your time at the highest Dubai skyscrapers. At the very least, you could be that shepherd we need to help us pimp our look as it were. Perhaps you could even guide us on how to create viral short-form videos. But far more importantly, I believe you can help us get better at comprehensive reading. As you mentioned in your recent tweeted response to the whole Zondo saga, “Three years and R1-billion later, DCJ Raymond Zondo has found no evidence to warrant a recommendation that I be charged with corruption. Instead of clearing me, he asks that I be investigated some more in the hope that this will kill me, politically. If only he and his handlers knew!”

Yet, my rather slow-witted colleagues still seem to be stuck on literal interpretations of parts of the report, such as: “Minister Gigaba’s overhaul of the Eskom board introduced patterns of instability. It is not apparent that the board appointed by Minister Gigaba had been sufficiently vetted in terms of integrity, collective skills and experience to govern Eskom and execute their fiduciary responsibility,” and they go on about recommendations that you should be criminally investigated for “cash payments allegedly received by them during visits to the Gupta compound in Saxonwold in the period 2010-2018.” Thank goodness you’re not the pimp of Zondo’s racist imagination, otherwise, a backhanded pimp-slap might be in order for some of your detractors.

So, my comrade leader, my shepherd, my shining star, I hope you will respond to my letter, and consider working with me on this Masterclass. The field of presstitution really needs your particular set of skills right now. Be our Malusi, show us the finer things, upgrade us, guide us to far more lucrative presstitution, the kind that could lead us to respectable tailored suits and help us make friends in the vicinity of the Burj Khalifa.

I know it deep in my heart that a shepherd such as yourself, in whom so much hope was placed at the moment of birth, would never lead his people to the ninth circle of lawless hell that our country is fast becoming. Even though they continue to accuse you of pimping us out, I know you wouldn’t be so heartless as to sell out millions of our people even as they are still recovering from decades of institutionalised oppression and dehumanisation.

From slavery to apartheid, history is littered with examples of psychopathic leaders for whom the suffering of others, their countrymen even, was of no consequence as long as they secured the bag for themselves and their descendants. Surely, leaders who would continue in that tradition and sentence generations of our people to the slow genocidal violence of poverty, in exchange for financial gain, are no different. Even worse if such an exchange was for a couple of hundred fancy suits, watches, and an Insta-worthy lifestyle; what would one even call such abhorrent low-lives?